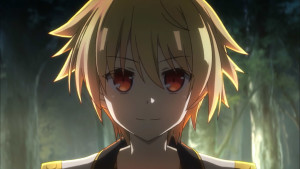 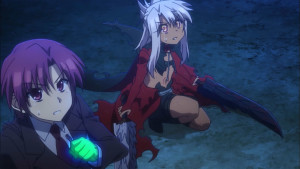 Well….things sure got serious. As expected secrets were revealed and things got to another level of crazy with this latest episode. The appearance of Gil really did add a level of chaos with Miyu unable to keep her secrets any longer and Illya getting pissed off enough….at Miyu, that she is ready to use everything she has in order to reach her. Reach her…and slap the heck out of her XD. While Illya’s magic may not be at its best, using two sticks should be enough to give her a serious power up. Asking Sapphire and Ruby to give all they have, had them combine and put Illya into basically badass mode XD.

With her, Kuro, and Bazett they should have a chance, but they are up against a pretty serious threat here. This is kind of monster Gil at this stage. The reincarnated part of him merged in with the berserk part of him and now is using that mass of power to attack with. Bad enough when it was just a regular sized and insane Gilgamesh, here is this giant monster that can launch weapons at them or just beat them down with pure power. Even Bazett is having a tough time dealing with that. Things have just gotten all the more difficult here and will be interesting to see how they deal with the threat currently facing them. 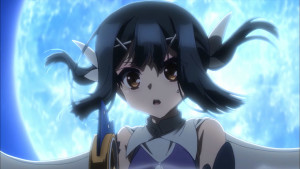 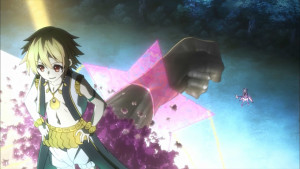 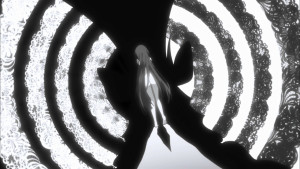 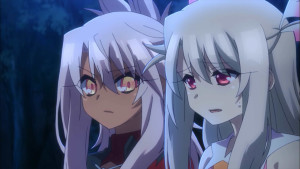 Of course I’m not all that surprised that Miyu basically threw in the towel at a certain point. She’s always been a bit of an awkward person in dealing with others and this situation has really pushed her. In the end this probably hammered at the feeling she always had that this situation was all her fault. It’s different from Illya/Kuro where they exist because the grail war did, but rather because Miyu existed all that stuff exists as well. Can understand her feeling that she dragged everyone in to her mess and now all this is happening, all this danger is being thrown at the people she cares about. Plus as we can see from the brief flashback of someone…who happens to look a lot like Shirou….clearly there are other things in her past that she feels a great deal of pain over. Right now she feels like her desires to have anything has lead to this situation and it’s just enough already.

Of course there’s no way anyone would agree with her thinking. Neither Kuro or Illya will accept that kind of selfish giving up. It’s clear that Miyu has had a really difficult time in the past, all this chaos related to her life and others have tried to use her for their personal reasons. Miyu is someone to sympathize with, but not someone they are going to leave. Kuro certainly was pissed enough at this development and Illya reached a point even further. That Miyu would treat them like strangers and say things like “destroy me” and apologizing for dragging someone uninvolved into this. They clearly aren’t uninvolved since they are her friends. 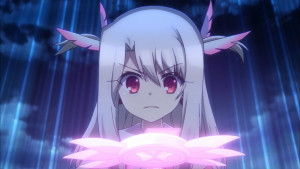 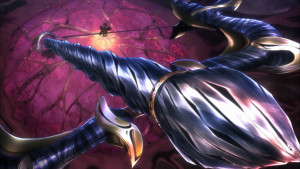 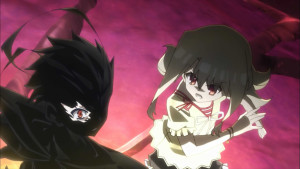 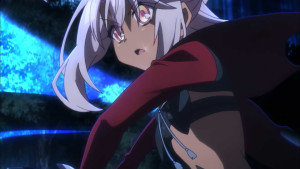 It was a pretty gusty if not insane move by Illya to get in there just to start off with giving Gil a slap XD. Using Berserker’s include to charge in and then Assassin in order to avoid that attack that would have slaughtered her. Of course it left her with no defense after that and if Kuro hadn’t made it in time….that would not have ended well. Despite being sure Illya can’t die in this show…that could have been an ugly way to go. Gil countering her include with the real form of Berserker’s weapon, one heck of a crossbow XD. That would have been a real disaster for Illya.

Of course things weren’t much easier on the side of Bazett and Kuro. Their charge was all the tougher since Gil had merged with his monstrous side and created a very dangerous opponent. Bazett is a monster in combat, but against a real monster she can only do so much. Though it did make for an interesting bit of acknowledgment between her and Kuro before jumping into the fray. While they tried to get close…it didn’t quite work out. But with Illya going into a powered up state there they should have a chance. Even against a monster Gil wielding some massive weapons. 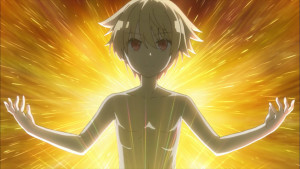 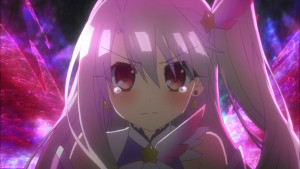 I’d definitely say this was another strong episode. Had a bit of comedy early on with Gil being….well Gil. Talk about some incredible confidence there about his naked body. We finally delved into the mystery of Miyu a bit and set up the final opponent for the cast. Miyu being an existence close to but different from Illya from another world entirely. The girl having appeared here along with the cards for some unknown reason. But it is clear from the flashes of that Shirou-like person that things were not good for her back home at all. Whatever the case, the important thing right now is Illya busting through that monster Gilgamesh and getting to Miyu herself. A bit of a slap and they should be just fine XD. Illya’s current form is a pretty cool one to be sure. Massive wings, a merged stick between Ruby and Sapphire, just darn impressive. Who knows what kind of power she can really unleash in that state. Illya really is something else. Pulling out the true capabilities of Ruby and Sapphire at a time when they really need it. Curious to see what kind of limitations or consequences there are to using that kind of power, but for now it is exactly what they need.
Score: A