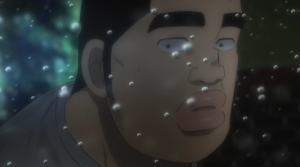 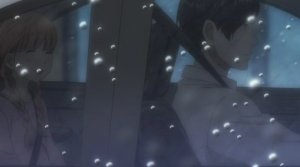 I usually put a few hours between watching a show and writing about it because I like to have time to think over what happened, but I’m doing this one immediately because this is a post that needs to be written while my blood is still hot and my eyes still seeing faint shades of red. That isn’t to say I thought it was a bad episode, by the way. I’m not mad at the writing, or at least I’m going to wait until next week’s conclusion to decide how I feel about the story itself. No, my fingers are hammering into these keys because of a new character. His name is Ichinose. And he. Is. The. Worst.

Okay, so first we should backtrack to the buildup to the blow up, because I didn’t spend the entire episode foaming at the mouth (just the last five minutes, really). This week shifts the focus back to TakeYama, as Yamato takes a part-time job at Les Cerises, a local sweet shop. There she meets 21-year-old patissier Ichinose Kouki, whose skills in the kitchen quickly earn her admiration. Yamato wants to make this man her mentor, but he sees her respect and interprets it as love, and spends the rest of the episode twisting her words, declaring her his “muse,” and basically deciding they were made for each other. 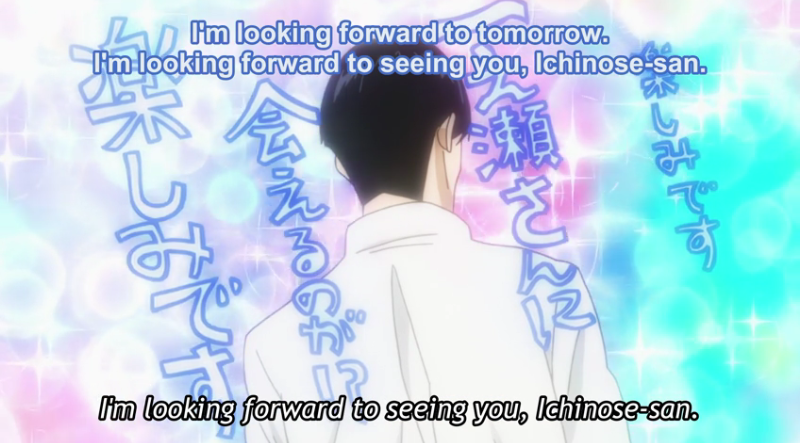 His thoughts fill the frame, leaving no room for others. WELL THAT’S NOT A BAD SIGN AT ALL.

Not even the talented Fukuyama Jun (who managed to embue Snow White’s local asshole prince with a certain amount of stupid charm) can make this guy likable, although there were signs early on that he was going to be sympathetic. Ichinose is self-centered and critical but genuinely talented, and possesses an ego simultaneously inflated and fragile. He’s written very much like a genius arteest might be written, which was a nice decision that draws some fun parallels and reminds us that Yamato’s passion isn’t just a viable job, but a bonafide art form. It lends extra weight to her dreams and adds even more layers of conflict to the story, since I want Yamato to learn from a talented pro almost as much as I want her to hit said pro in the face with a cake pan.

During the first 20-odd minutes, Ichinose is basically (as one follower astutely noted) your standard Jerk Romantic Hero, but a relatively harmless one, at least, and most of the conflict exists in Takeo’s head. Takeo is, I’m sorry to tell you, not a perfect human being. He’s overprotective of Yamato to the point of quasi-stalking her, and he gets wayyyy too worked up and jealous about her coworker calling her by her first name. But he’s also a great listener who genuinely cares about what his girlfriend has to say, supports her goals even if they conflict with his own, and—most importantly this week—acknowledges when he’s being irrational and owns up to his jealousy being about his insecurities, not anything Yamato has “done wrong.” No, Takeo is not a perfect human being, but he’s growing into a really good dude. 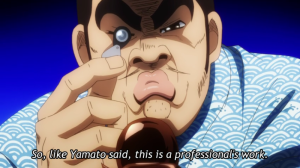 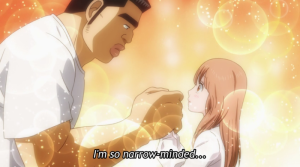 He’s also unnecessarily hard on himself, so Suna tries to talk him down by telling him it’s “normal” to be uncomfortable about another guy hanging out with your girlfriend. I really wish Suna had followed this up with “it’s not a good thing, mind you,” but I think his point here is just that Takeo doesn’t need to beat himself up about it—it’s enough to recognize this flaw and try to work through it rather than deciding it makes him a failure of a human being. As Takeo mulls over the possibility of calling Yamato by her first name (and getting adorably flustered about it, too), it feels like we’re going to slide into our usual feel-good OreMono episode conclusion…

…Until Ichinose finds out Takeo is Yamato’s boyfriend, anyway, and my hands turn into claws on the edge of the nearest flipping table. Ichinose’s response to this news is to race after Takeo and DEMAND he break up with Yamato. He then probes for information about their relationship and concludes that Yamato’s only with Takeo because she feels gratitude toward him, not out of any real affection. And she’s such a SILLY little thing, how could she POSSIBLY understand her own feelings, but that’s okay, HE’LL show her what REAL love looks like. 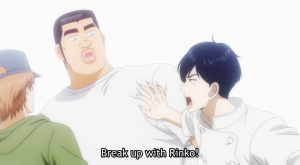 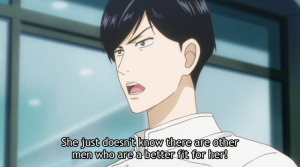 And you know, I said this on Twitter yesterday, but it really bears repeating: Fuck this guy. Fuck this guy for mapping his own feelings (insomuch as a walking pile of red flags can “feel” things) onto Yamato, for intentionally misinterpreting her earlier words of excitement about the cake shop into words of affection, for pretending he knows what’s “best” for her when he’s really just trying to fulfill his own selfish desires, and for thinking he understands her and her relationship with Takeo better than she does. He’s a manipulative, predatory, egotistical asshole, and I hope he drowns in his own gelato.

Takeo is only marginally better here, mind you, because he also never thinks to just talk to Yamato about all this and see how she feels (and she is so clearly not into Ichinose, by the way). But he is, at the very least, actually trying to think about what would make Yamato happy, and willing to acknowledge that what would make her happy may not be the same things that would make him happy. 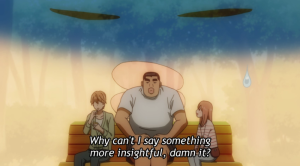 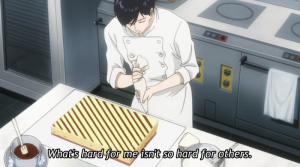 It’s frustrating, but (as Ai notes) not all that surprising. We’ve known from Day One that Takeo struggles with self-confidence and is so eager to help others that he often acts without fully understanding the other person’s feelings. When those two traits combine, they form Takeo at his weakest: Willing to give up on Yamato because he’s arbitrarily decided she’d be better off with someone else. There’s no real worry here that IchiNO!se is going to “steal” Yamato, but there is worry that Takeo’s going to do something in the name of “unselfishness” that’ll get them both hurt. Welp. If ever there was a time for Takeo to confront his insecurity head-on and use The Power of Communication to work through a self-made mess, the series finale sure seems like a good place to do it. 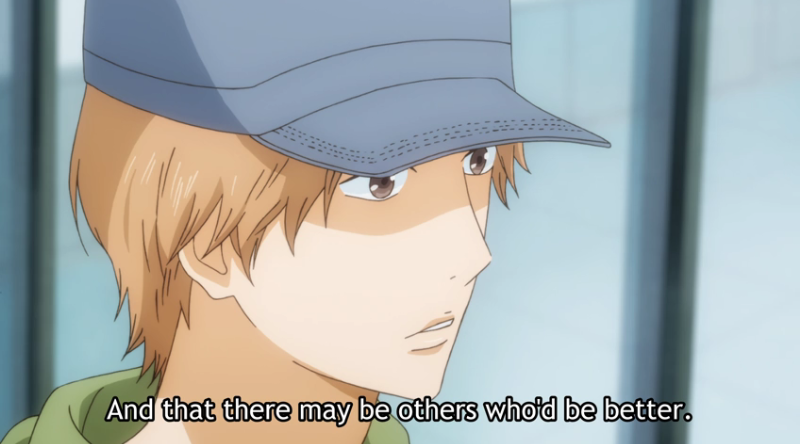 “What?! NO! YOU CAN’T! I’m only halfway through Chapter 5 of my latest friendfiction!”