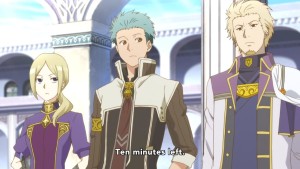 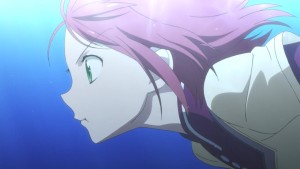 Lest anyone forget, Akagami no Shirayuki-hime IS a shoujo romance show, through and through. It’s easy to forget that the core story is about Shirayuki and Zen, especially since this show is so atypical in how it goes about everything. Building the world, its characters, a social and political system, Akagami no Shirayuki has been carefully laying the ground work for what we got this week. 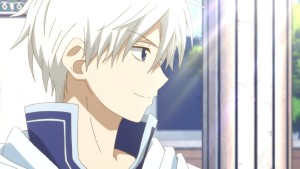 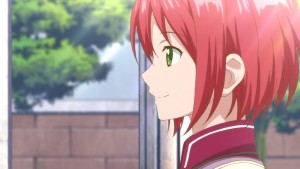 One of the things that I personally have loved about this series is the organic way in which Shirayuki and Zen have continued to grow closer. They’re closer than friends, feeling each other out and “all but there” in terms of being with one another.

The series has already established quite potently, that there are several obstacles in the couple’s way to happiness. The fact that Zen is a prince and Shirayuki is a commoner is the crux of the issue. And if you had asked me if I would’ve been this impressed with a cliche story like that, one about a foreign commoner girl wooing a likable prince, I’d have probably laughed you out of the room. 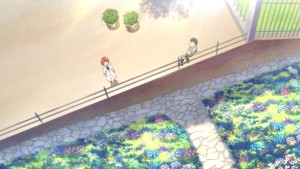 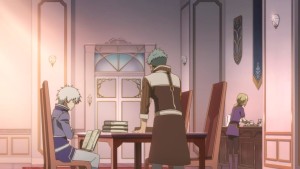 Sure, I’m a romantic at heart, anyone who watches these kinds of shows is, but… I think its worth giving credit where credit is due. I think this show’s greatest achievement is making the tried and true feel so original and fresh, with great storytelling, expert pacing and lovable characters.

Joining the ranks of our lovable ensemble this week was Kihal. When I saw the preview last week, and with her seemingly arguing with Shirayuki, I thought of two possibilities. One, that Kihal was going to be a romantic rival, one that may be the more politically “correct” match for Zen. Or Two, where she might end up being a fiance or the future queen of Clariness, and Izana’s betrothed. 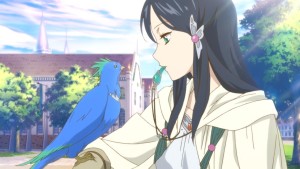 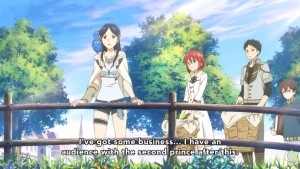 Boy was I off base here. As multiple people in the comments have pointed out at multiple points throughout the series’ run, Akagami no Shirayuki is simply above trite and over dramatic plot elements like that.

Imagine my joy then, when I found out that Kihal’s visit to the castle was purely business, not pleasure. Kihal’s big problem was the hunting of birds that she and her people had been living in harmony with since the old days. Due to a change in Lordship, a sleazeball by the name of Brecker ends up in charge of that territory. 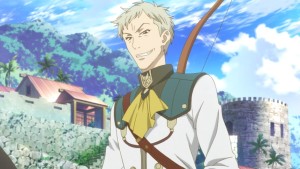 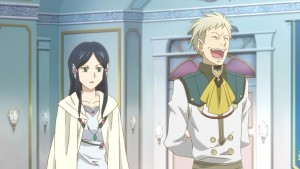 Brecker’s your classic arrogant, spoiled and oppressive noble. He doesn’t value the culture and customs of those under him, while thinking he’s too clever for his own good. You’ve got to have some serious gal to use the second Prince to assert your authority over those in your territory afterall.

Kihal, despite having her heart in the right place, has lost before she even began. Again, its a classic trope, where the oppressed generalization and doubt all of authority after being wronged. While Kihal is very much there in an effort to save the species of birds that she grew up with, she’s more or less given up before she’s even tried. 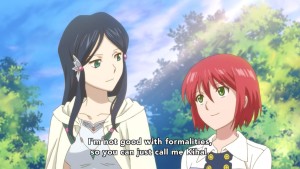 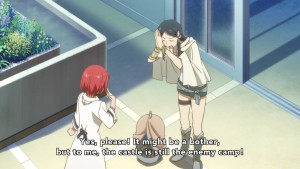 Its exceedingly lucky, therefore, that Kihal ends up running into Shirayuki and talking to her before she meets with Zen. Hell, one of these days I need to run into Shirayuki when I’m up against impossible odds, because she’s an exceedingly good omen XD

Zen’s hands are obviously tied, since he doesn’t really have a leg to stand on in regards to protecting the birds. They offer no clear benefit, and the territory itself isn’t a huge earner. In the end if you’re going to undermine someone’s authority, you have to a seriously good reason. 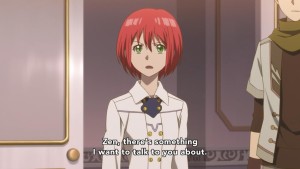 Of course, that’s where Shirayuki comes in. Having seen Kihal call her bird Popo via a unique whistle created from the island’s unique mineral, Shirayuki puts two and two together. Messenger birds? Yep!

I will say that its kind of hilarious that it takes BOTH Zen and Shirayuki to come up with that solution, but I guess that just gives us an idea of how advanced this civilization is. 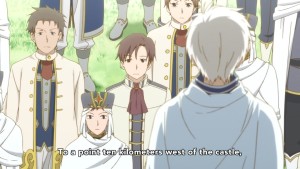 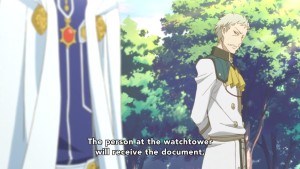 But its when Zen goes forward in putting this theory to the test, that things get hairy. The sleazeball Lord, Brecker isn’t content to simply watch Shirayuki and Zen crumble his plans, and ends up pressing to join Shirayuki some distance away, and participate in the experiment.

Zen obviously allows it, because he believes in Shirayuki and his men but… Its here that Brecker really hits a new low. At this point, everyone’s pretty much aware of Shirayuki and Zen, and Brecker is perhaps the first to try and take advantage of it. 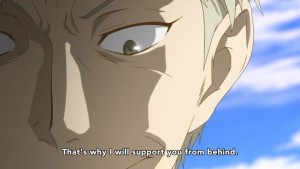 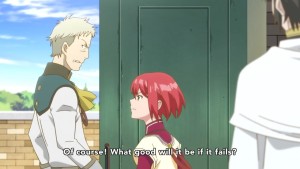 The deal he offers her would tempt quite a few. Shirayuki is a commoner, but if she had the support of a Lord, her social standing could improve, fixing the situation she’s in. But Shirayuki obviously isn’t one of those few, and puts Kihal and the Kingdom above herself.

That’s not surprising, but Brecker continues to surprise, sink deeper and deepers into the annals of the despicable. Failing to bribe Shirayuki to his side, the next thing he does is use force, throwing the bell that would direct the bird into the nearby water, and locking Shirayuki away in the room. 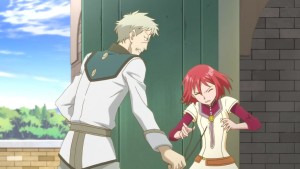 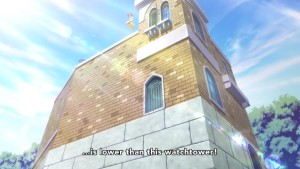 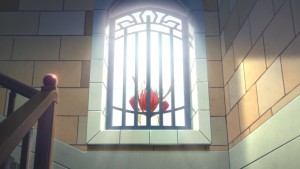 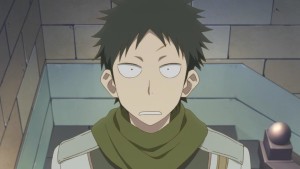 But… In classic Shirayuki fashion, her selflessness one ups him, much to Obi’s horror. I do sympathize with Obi, as he literally sees her falling through the window as he goes to check on her.

It all ends as you’d expect from the show at this point, with Shirayuki saving the day with Obi and the guards help. More so than her actions though, its Shirayuki’s word that moved me. When Brecker arrogantly proclaims that Zen would hardly believe her over him, as that would be political suicide… Shirayuki just shuts him up for good. 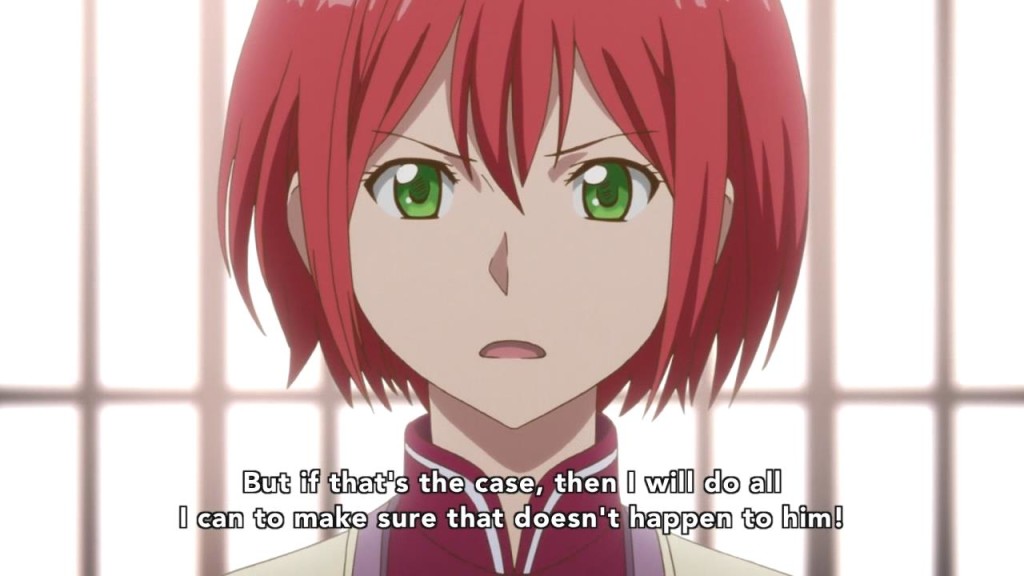 “There are indeed certain times when we can’t act how we feel, but if that’s true, then I won’t let Zen be in that position.”

Yeah. Remember me mentioning a few weeks ago that Shirayuki was uniquely suited for Zen as a partner? Well here’s the friggin thesis to my argument right there! 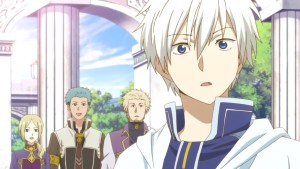 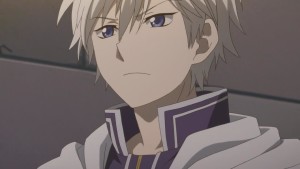 And I’m not the only one who feels that way. When Zen hears of Shirayuki’s words and actions after everything’s over, he’s obviously moved beyond words. And boom! There’s no more holding back for Zen, as he goes right in and kisses her.

The importance of this moment cannot be understated. Remember that organic rhythm that Zen and Shirayuki have had so far? Its been disrupted. Zen’s moved it up a notch, surprising both the audience and Shirayuki in the process. 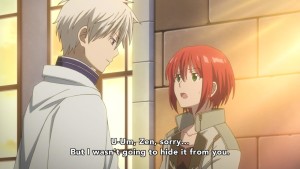 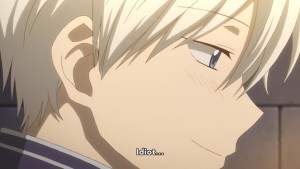 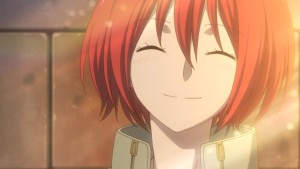 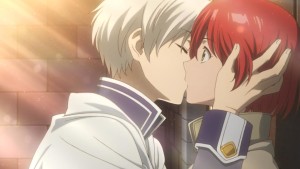 We’re at a point now, where Zen’s feelings are pretty much on the table now. Zen’s not waiting and he’s not caring about social position or appearances. Where do we go from here? How does Shirayuki respond?

Those are exactly the kind of questions this series needs to tackle before this cour ends and it goes on a break for one season. To say that I’m curious to see where the story goes now is the understatement of the century. The real question is how far the story goes before go on break, and whether the dynamic does change drastically, or just lurch forward to the inevitable outcome that everyone wants. 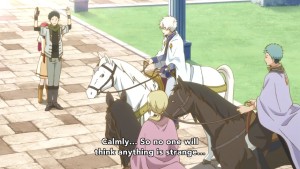 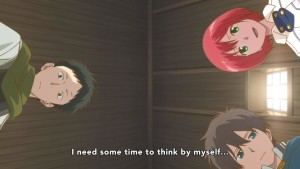 Seems like we’ll be exploring the fallout (if you can call it that) from the moment at the end of the episode. Next week can’t get here soon enough!