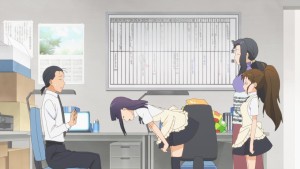 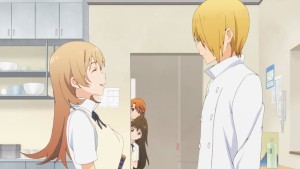 Watching Working!!! is like observing an ever oscillating pendulum swing from one extreme to the other. Sometimes it will completely swing toward one extreme (the comedy), and then to the other (romance). In rare instances, however, it’ll fall squarely in the middle, and its that point, that its perhaps at its best. 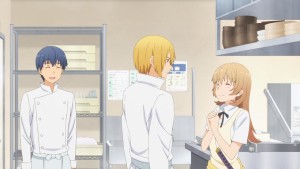 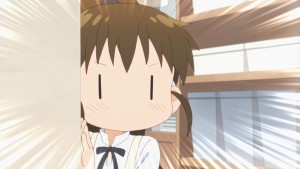 We’ve had mostly great episodes from this third outing with the folks at Wagnaria, but I’d say it was this week’s episode that felt the most balanced as a romcom. I equally laughed at some of the funnier bits, and then went on to hem and haw when we got some of the much craved romantic developments.

The opening segment with Inami observing Satou and Yachiyou’s latest interaction, Souma in a front row seat and the surprising addition of Popular-chan… I think best represents how things may seem like they’re still in routine but are very much markedly different. 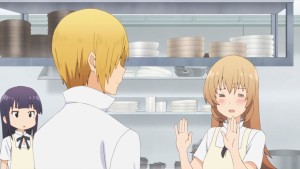 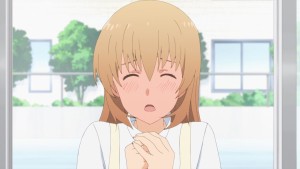 The reason Yachiyou talks to Satou about Kyouko now isn’t because she wants to gush about Kyouko to whomever will listen but because that’s actually her excuse to talk to HIM. Its actually kind of cute, seeing Yachiyou even practice saying Kyouko’s name because she’s nervous about messing up infront of him. Much like Satou’s four present giveaway from last week, however, there’s an element of awkwardness to the whole thing as well.

Yachiyou and Satou really are a match made in Heaven, because I can’t imagine either of them being with anyone but each other. Only Satou could be fine waiting for Yachiyou to slowly understand her feelings for him, and only Yachiyou would like a rather slow moving guy like Satou. Its an endearing but slow crawl for those two, and I think it can also feel a bit frustrating by how slow their progress really is. 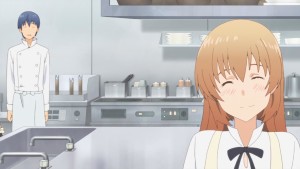 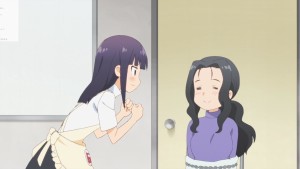 But in classic Working fashion, that’s the joke. Souma and Yamada are equally as frustrated by how the two main couples continue to sloth their way towards what should be an eventual relationship, and try their best to push it along.

We’ve already seen Souma do a lot for both of the couples, but its Yamada’s sincere attempts that actually lead to the most hilarious bits this week. 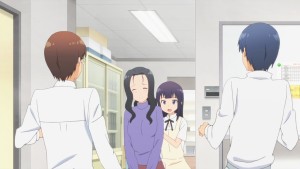 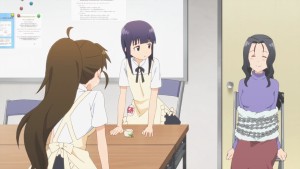 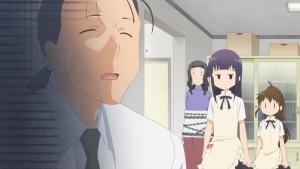 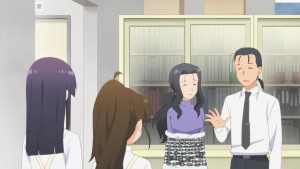 I really really love the fact that Haruna-san is a much more active member of the cast, because the gags with her and Otoo in them are not only hilarious but novel and fresh. The “stealth” couple bits, with no one realizing that both Otoo and Haruna are in the room when they do their akward romance dance, was just beyond funny.

The fact that Haruna continues to be chained to chairs and what not, and still manages to disappear is a joke that never gets old. Added to that, its Yamada that ends up being able to find her every time, while Souma understandably has a heart attack whenever he sees her. Its just all exceedingly well done comedy, and comedy that leverages a recent change in the status quo. 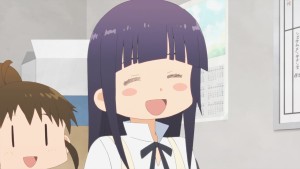 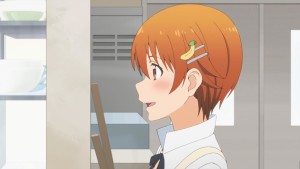 Its in the interaction between these two different types of characters that we get this exceedingly balanced show. Minegishi for example, actually pulls double duty and ends up being both a facilitator and a romantic in the same episode. I’ll admit, when I saw him the first time, his whole Masochist routine kinda irked me a bit. It was funny, for sure, but I just absolutely disliked him as a person. 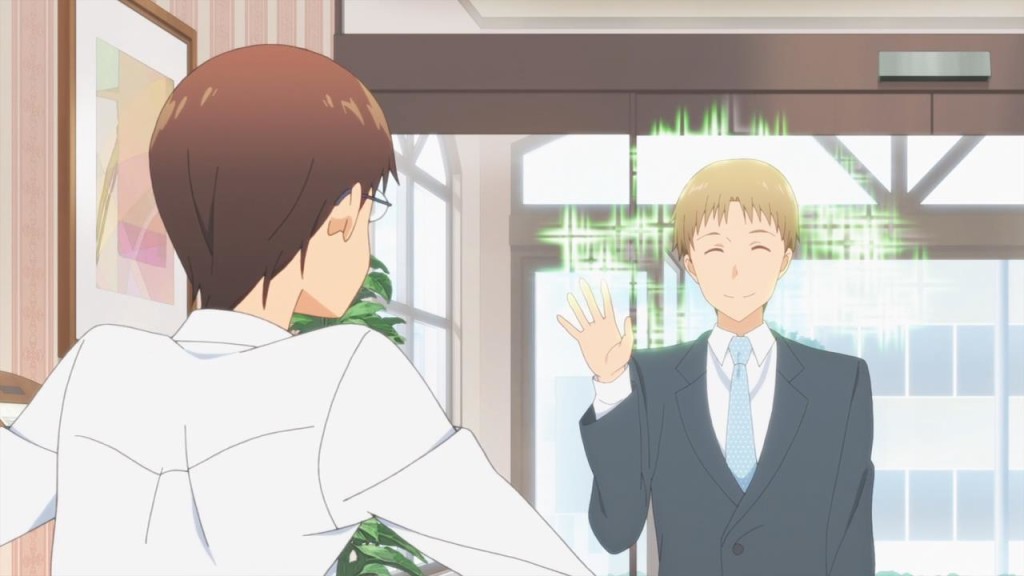 This week did change that a bit. While Minegishi probably takes the cake as the oddest member of the Working! cast, he’s kind of admirable in his own way.

While I’m sure he actually ends up coming to see Souta just to get a bit of verbal abuse from him, the point he makes about Souta using his sisters to avoid love is pretty salient. So much so that even Souta takes a bit of a pause to reflect on it. 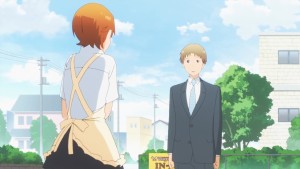 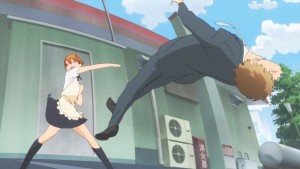 But where Minegishi just ends up leveling up in my eyes, is when he runs into Inami. Obviously, he ends up getting hit by her because even if Inami has gotten better about hitting men, I think her old habits are bound to come back when there’s an actual weirdo approaching her.

The effect of this punch though, is two fold. First, we get the most touching and awesome scene between Inami and Souta that just encapsulates everything about why they’re so good together. What’s great about Inami and Souta, much like Satou and Yachiyou, is that they’re both flawed people that bring out the best in one another. 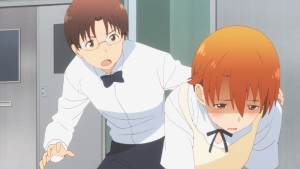 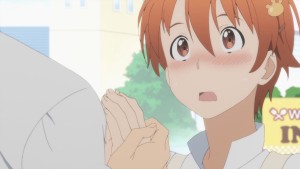 They like each other, value each other for their good qualities, and clearly deal with each other’s shortcomings. The fact that Souta instinctively grabs Inami’s hands to comfort her and support her in a time where she’s clearly depressed, is just great. And it shows how Souta’s opinions of Inami have changed too, as previously he would’ve been a lot more hesitant to even go near her.

I think there’s also a clear different between the Souta x Inami pairing and the Satou x Yachiyou one. Souta and Inami feel like they’re 98% of the way there, and all they really have to do is just… Get together (As Yamada puts it). They both know that there’s something there, and Souta even knows about Inami’s feelings, so all he has to do is admit those feelings and go for it. 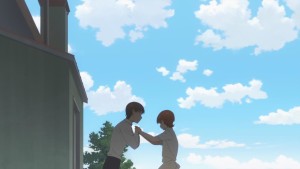 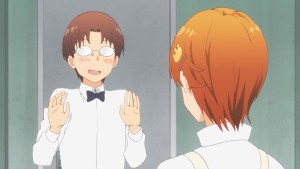 But it seems unlike Yachiyou and Satou, these two actually need one final push to get to where they need to go. And I think that’s where Souta’s mother is going to come in….

But lets dial back for one second, and talk about Minegishi, and what happened to him after getting punched by Inami. While its true that did good things for Souta and Inami, it actually led to him getting back together with his ex-wife, Kazue. I’m not exactly sure its the best thing for Kazue to have to be eternally stuck with Minegishi for the rest of her life, as that borders on eternal torture but… You’ve gotta give to Minegishi for his “I realized I only want to be hit by you” thing. Its kind of sweet… In a really twisted, funny way. 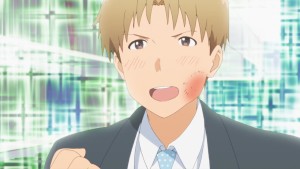 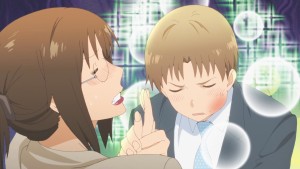 So all’s well that ends well eh? I suppose we can expect to see more odd turmoil in the Takanashi family. And speaking of which, Minegishi ends up letting one final bomb drop when he comes back the next day to “follow up” with Inami. Souta’s mother is coming.

We’ve heard about Souta’s mother a lot this season, and it seems that nearly every odd member of the Takanashi family feels dread by the meare mention of her name. It seems like we’ll end up seeing her before the series is over, and I have a strange suspicion that its this meeting that will probably lead Souta to and Inami to finally get together. 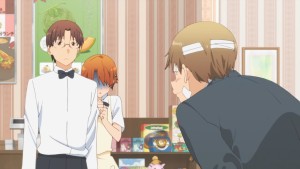 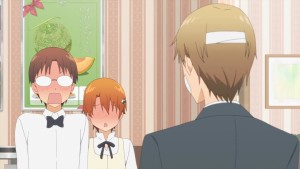 If nothing else, things are at a very nice point with everyone and everything in the cast, and its great to see that we’ve got a few more surprises before we get to the ending that this show seems to be very carefully building up to.

After all that we’ve seen this season, I’m pretty confident in what we’re going to get, and that its going to be great. 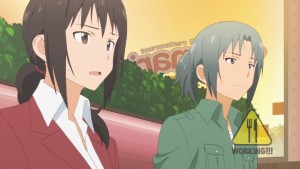 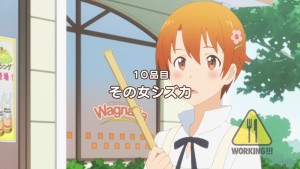 The head woman of the Takanashi household seems like she’ll make her appearance. I cannot wait.