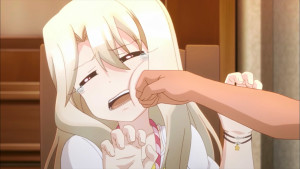 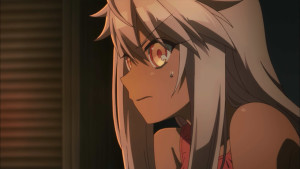 In a sense this is the real first episode for 2wei Herz. There was a bit of lighthearted fun at the beginning, but a good part of the episode was setting the stage for the battle against the 8th card. Finally they got through just having little bits of fun that had a some hinting about Miyu mixed in. Now the issues are starting to be brought up and a lot of the pushing is thanks to Kuro. I’m amazed that she could hold off this long and you can kind of tell that they basically inserted a lot of filler between last season and this episode. It makes sense that Kuro would go and challenge Irisviel about the cards and challenge Illya about the situation surrounding Miyu. This is a battle that is going to be incredibly dangerous, if there are answers out there then she’s going to want to go after them.

I do think Illya is running in some respects since she’s had more than enough time to talk to Miyu about what is going on and not have it distract from the fight ahead. But I agree that at this moment they do need to keep the target squarely in their sights. This card is going to be more powerful than anything they’ve seen yet due to the mana that’s been absorbed. They also have Bazett to worry about. She isn’t going to simply let them take the card and frankly once it is captured….there could be a second round of the fight that nearly got them all beaten last season. Bazett isn’t an ally here, she’s a competitor. 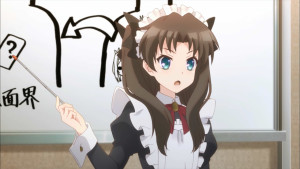 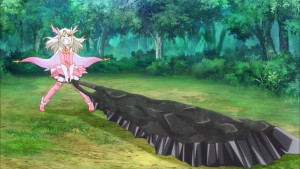 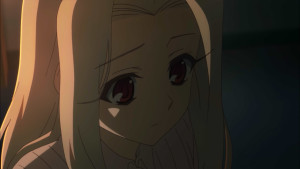 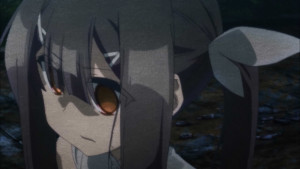 This is what I’ve been waiting for (well mostly). The plot has finally gotten started again. Of course Kuro is going to go after her mother, this is just too suspicious. These cards that just happen to have the same classes as the Grail War have popped into this city. Class Cards and Servants, that isn’t something that would just normally happen. I’m sure that all of Kuro’s frustrations haven’t completely settled yet either when it comes to herself and Irisviel. Her very existence is tied up in both the grail war and the class cards. Though in this case it doesn’t seem like Irisviel has any information that would shed light on it. She obviously suspected something was going on with Illya before and she was involved in some magical trouble. But I don’t think she knows what the cards are exactly nor is she involved with their creation. That doesn’t mean they aren’t connected to the grail war, but it does mean that Irisviel isn’t all-knowing.

The other challenge is towards Miyu and that one definitely seems more solid. Miyu’s whole existence is suspicious. What she knows and has/hasn’t experienced can be pretty strange at times. Her own words about the 8th card after hearing about it is also pretty suspicious. How much does she know that she thinks an 8th card shouldn’t exist? The issue of course is that everyone is just giving Miyu all the space in the world. She isn’t volunteering things and they aren’t pushing her. Thus…nothing happens. Now perhaps getting the 8th card will help settle things, but while I don’t think Miyu is a secret villain, I do think that it’s important to find out the truth. 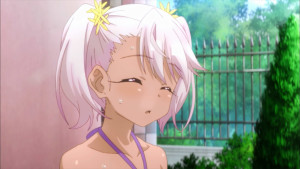 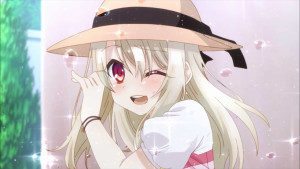 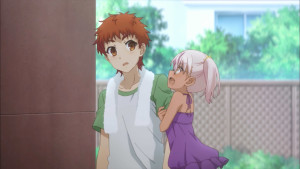 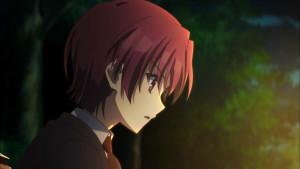 I do like how quickly Bazett gets into work mode. She has been homeless more or less for weeks now, but she’s ready to go regardless. It’s easy to forget she is a total badass who could kill the entire main cast if she wanted to. Messing with her finances doesn’t erase her actual skill. It’s just an inconvenience.

There was some fun in this episode to be sure. They just fooled around with the pool scene and then the lunch. Irisviel sure knows how to play people and got herself a great deal of entertainment. Practically bribing Rin and Luvia with pictures of Shirou was pretty fun XD. It is a shame that Shirou always pays the price when people get upset, but he does have a pretty lucky existence otherwise so it’s ok. Maybe it’s just the cost of what he does have. Maybe the best part of this episode was that they didn’t drag out the silly stuff. It’s best when it’s in quick bursts and doesn’t take up entire episodes. 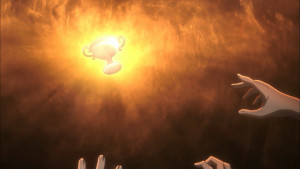 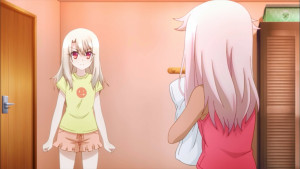 There isn’t too much else to say about this one. I did like the ‘sisterly’ moment with Luvia and Miyu. It does show that Miyu has built up a good network of friends in the short time she’s been here. I don’t think she’ll betray that trust, but it is a nice thing to have it. The fun will start next week with the fight finally commencing. This is going to be tough, but how tough is hard to say until the battle begins. They are going into this completely blind and will have to just unleash all hell from the beginning. Anything less than 100% won’t get the job done. The downside is that they don’t have their main attack cards for include or install. May have to gamble with installing one of those three cards. Can’t wait for next week, finally getting excited here.
Score: A-