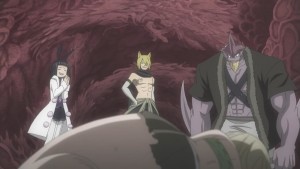 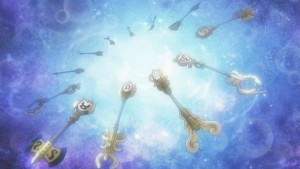 Its times like these, when words really do escape you, when a wealth of emotion just floods through your system, that you know something truly monumental has happened. Something that’ll stick with you for ages, probably long past even the contain series’ own eventual conclusion.

As a blogger/writer, I have this weird quirk where I have to write about an anime episode immediately after seeing it or I just can’t do a decent job of it. Most of the time, that really works to my advantage, even if it is a major time sink. This time? Well lets just say I’m still reeling from what I saw on screen just now, and the words aren’t exactly coming to me XD 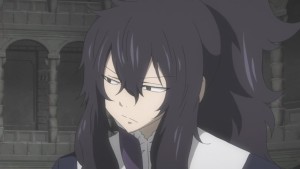 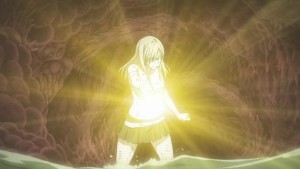 One could argue, that the saddest thing that any invested audience member can experience is the death of a character that they’re attached too. Its used to great effect in a lot of media, where full permanent death can really just mean saying good bye to an awesome character. Fairy Tail’s gotten close to something resembling that a few times, even trolled us with the idea somewhat but… What happened this week I think, really captures the essence of the kind of loss that death brings.

Regardless of whether you believe in some kind of afterlife or not, when someone dies, there’s one irrefutable fact: You aren’t seeing them again in this life time. Its a really painful thing to come to grips with, and its that exact feeling of loss that Mashima-sensei leveraged at this point. He then proceeded to deliver the biggest gut-punch I’ve seen from Fairy Tail yet. 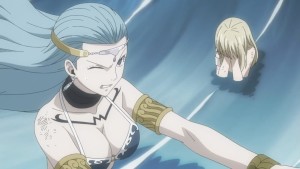 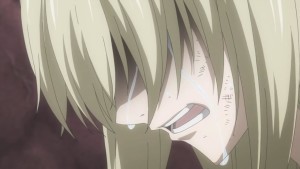 Lets make no excuses or sidestep what actually happened here. Lucy was faced with a no win situation. She could either sacrifice her best and most cherished friend, her elder sister figure Aquarius, or she could see all her friends and the world perish. And Lucy made the impossibly difficult choice of sacrificing her friend for the greater good, for all intents and purposes.

You can argue that Aquarius doesn’t technically die, but I’d argue that for all intents and purposes that is exactly what happened. Not being able to see one another forever? I’d say Aquarius is dead to Lucy in all but name. Sure, Lucy doesn’t have to live with the guilt that she ended Aquarius’s life, but she gave up their relationship, their physical and emotional connection, all to save the world. 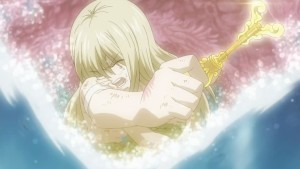 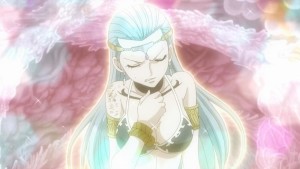 That’s kind of a powerful statement here. The sense of loss, what Lucy and Aquarius have to endure in order to save the day? Its immeasurable. Time and time again, Lucy’s most lovable and powerful quality has been her friendship and love for the Celestial Spirits. Its been a constant, feel good part of the larger story in Fairy Tail. Sometimes its used to make battles more interesting, some times for comedy, and this one time… To make the audience feel a sense of loss that is otherwise only possible with the literal death of a character.

Beyond just losing one of her closest family though, this whole decision has a deeper implication, one that we’ve seen constantly explored in the Tartaros arc. Simply put, Lucy had to compromise on her core being, destroy a part of herself, what makes her human, in order to become a hero. In her sacrifice, she also killed the part of herself that’s been so admirable so far, i.e her uncompromising love and refusal to use her Celestial spirits as tools. 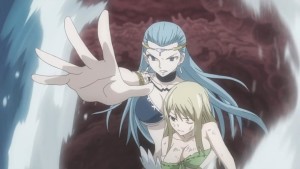 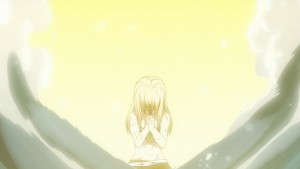 And in the end, in order to save the day, Lucy had to just that. She had to do the thing she most hated, because there was simply no other way. The sacrifice part of being a hero is something that often gets overlooked in fiction, no matter what medium you’re in. But as this episode demonstrates, its the sacrifice of the things that the heroes truly cherish, that makes for the most impressive heroic acts.

I don’t care what your opinions of Lucy and Aquarius have been up to this point, they deserve respect, as much as any two fictional characters can get. Their actions were just that impressive, great and utterly heart breaking at the same time. 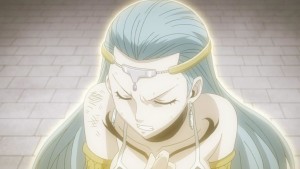 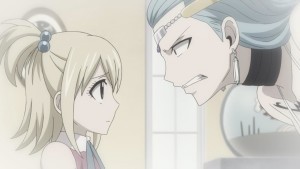 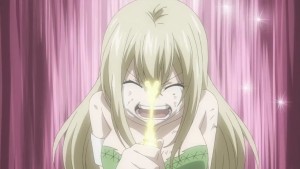 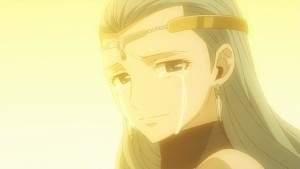 Speaking of heart-breaking, I’d say It was the flashback scenes that ultimately broke me. I had been watery eyed till then, but once those flashback scenes of Lucy and Aquarius played, with Aquarius’s regret and lonliness at forever losing Lucy… Well that just did it. The water works very much started. That sense of pain you get from loss, its unexplainable, unfair and the sort of thing that you wish with all your heart to change but… You can’t. Mashima-sensei and then the Fairy Tail anime production staff just… delivered it in full there. I was largely left numb following all that intense sadness.

And man, for once, everything felt like a blurr, an unreal haze. You always hear people say: “It all happened so fast…” and that’s just how I’d describe the episode. I’m not sure if that’s just because of how powerful and off balancing the Aquarius sacrifice moment was, but I definitely felt like the pacing was lighting fast this week. In some ways, it did feel a bit odd, for this huge and weighty decision to just come out of nowhere. If there were a complaint I’d have for this episode, it’d be that we went pretty quickly from “Lets try and face Tartaros” to “its time for the last resort of last resorts”. Then again, I’m not really sure I can hold it against the story, because these kind of insurmountable challenges do hit us suddenly and unexpectedly. 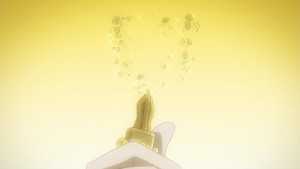 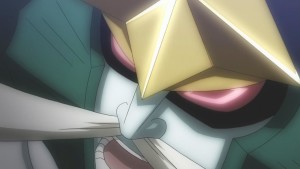 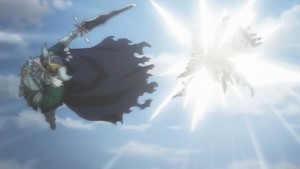 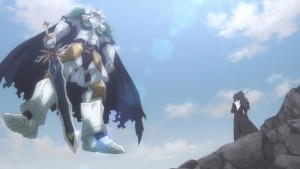 But, Lucy rose to the occasion. She was faced with a choice that no one should have to make, and she made it. For what its worth, Lucy’s ultimate sacrifice did pave way for something really frigging awesome, something that I didn’t quite think was possible. Lucy summoned the friggin Spirit King himself! Talk about intense! I know I should be happy and all excited about how the Spirit King is going to just own everything and all, and a part of me is but… Right now the Aquarius thing kind of used up most of my mental and emotional bandwidth.

There are some other things that happened of course, like Lammy getting killed by Jackal and what not, but like I said, right now none of that feels important. Something so major has happened, that I think it’ll rock the core of what Fairy Tail is for ages to come, or at least, I hope it does. It has to, after experiencing loss like this, I wonder how Lucy will get through this? Will she tell the rest of the guild what happened? What will everyone say to her? All these future moments are going to be equally as important as what we saw go down this week. 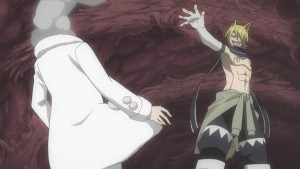 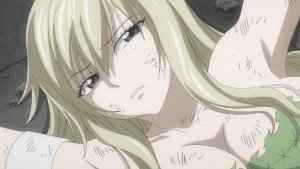 I’ll say this though… Its episodes like this. Its episodes like this that make Fairy Tail my personal favorite shounen show and one of the best anime, period. I really do feel that after an episode like this, I just feel sorry for all the naysayers who’ve spoke against this series, disregarded it e.t.c. To me, Fairy Tail trumps impressive series like HunterxHunter, Naruto, Bleach and I’ll say it, even One Piece. The way that Mashima-sensei makes you FEEL, its just something that’s uniquely his. The feel good moments, the horribly painful ones, they’re all quite potent and powerful.

And I think, I have to give a special shout out to Aya Hirano and Eri Kitamura. The two of them absolutely killed it as Lucy and Aquarius, and I think this was definitely a career defining performance for both. They’ve created a bond between two characters that at least I personally, will remember for years to come. 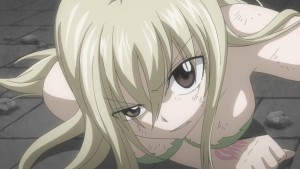 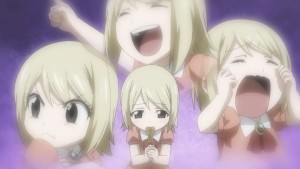 And while we’re on the topic, lets give some props to Lucy, the character, as well. Lucy is a character that a lot of people love to hate on, and I’ve never really understood that. Despite the rather unrealistic amount of times she seems to lose her clothing, Lucy is such a lovable and likable character, that I can’t help but be aghast at some of the hate she receives. I’d easily call her the best female character in a shounen series (granted, she’s not got a lot of competition there), and one of the best characters to come out anime as a whole. In some ways, Lucy’s kind of even eclipsed Natsu every now and then, and I think this week was one of those times.

In the end, I’d like to say that this was an episode that was both tough to watch, but very very impressive to behold and experience. Normally I’d have not thought twice before giving this an S-Grade, but I don’t know I just… didn’t feel like it at first. Maybe its because the show just worked its magic too well… I can’t seem to think of this episode in a fond manner, no matter how impressive it is. Maybe its the rushed pacing that I felt in the middle of the episode before the whole sacrifice thing actually happened? I’m not sure. I do believe that these kinds of episodes can’t really be “scored” or “quantified” by conventional means. Its just something that I think is an experience to be had. Its something that those of us who’re fans of Fairy Tail have been lucky to experience because… Its not every day that something can affect you so deeply, in such a personal manner. For that reason alone, I want to give this episode the highest rating I possibly can. For me, this really is the pinnacle of entertainment. 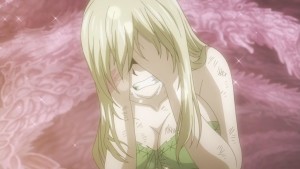 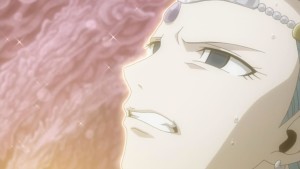 I’m not sure if there’s any moment following this episode, that can top it but… I’m definitely curious to see how the story goes from here. Now excuse me, as I go pick up the pieces of my broken heart from the floor, alongside my jaw, and the mush that is my brain. 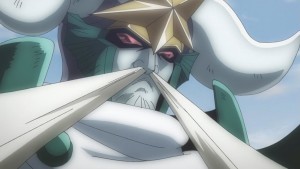 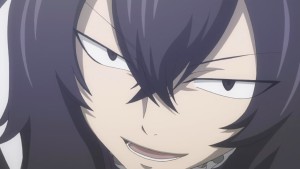