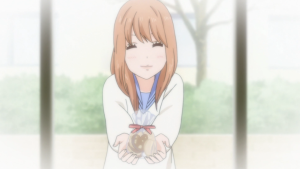 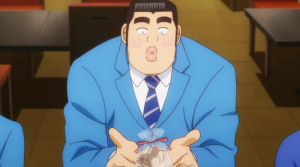 It’s Valentine’s Day, which means love and loneliness are out in full force this week. As with Christmas, Japan imported this holiday from the west and then put their own spin on it, so I’ve included a super-sized Sensei Next Door at the end of this post to give everyone some cultural context. For now, though, let’s just focus on the main event: CHOCOLATE. Sweet, delicious chocolate.

Takeo’s never received chocolate from a girl who (really) likes him, so he doesn’t even realize the importance of the upcoming holiday until Suna reminds him that he’s got a girlfriend now WHO BAKES and so he’s all but guaranteed to get something delicious. Takeo proceeds to spend the rest of the episode adorably flipping out.

The guys are all super-cute and excited about their V-Day gifts, actually. It’s a refreshing change from the usual western Valentine’s Day tales, and does a good job of highlighting how both girls and guys enjoy these goofy little signs of affection and/or friendship, as well as how giving gifts can be just as meaningful or fun as receiving them. 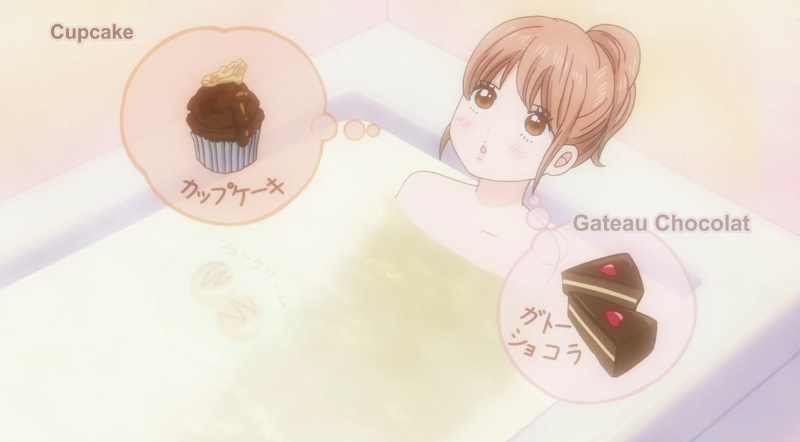 It’s also a lighthearted way to show how much social pressure gets put on people (especially teens) to participate in these kinds of romantic-focused holidays, and how bummed it can make those who don’t have any special plans. Both Yamato’s and Takeo’s friends are jealous not so much because they want girl/boyfriends and don’t have them, but because they feel left out of the festivities.

Fortunately TakeYama are the nicest people in the world (maybe too nice, Suna thinks) and save their buddies from lonely evenings by planning and hosting a group event instead. It even leads to the two groups exchanging contact info so they can get together in the future without dragging TakeYama along. Hopefully they can stay friends without it leading to arbitrary romantic pairings, as OreMono could stand to have a few more platonic opposite-sex relationships in its cast. 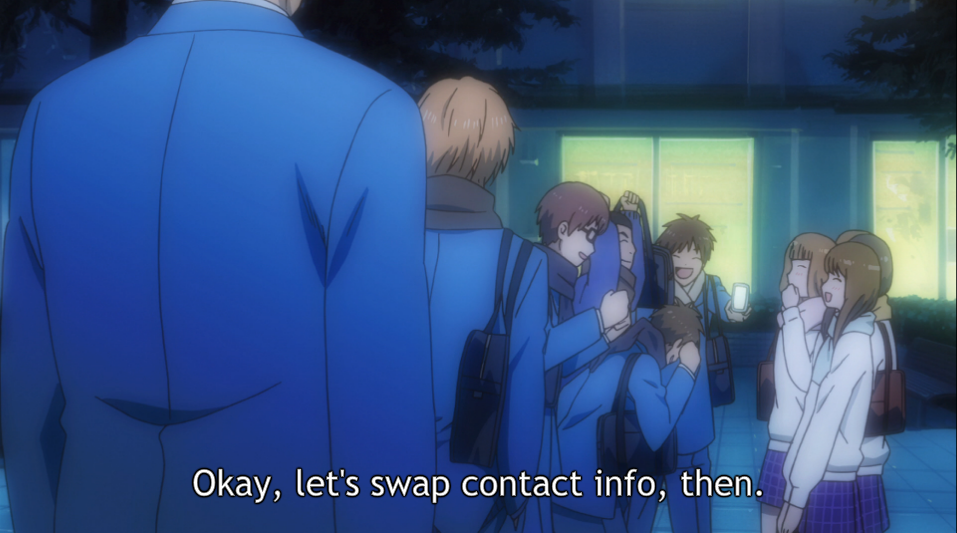 “Imma send you soooo many pics of my cat, like you don’t even KNOW.”

What little conflict there is this week comes from (you guessed it) a combination of cultural expectations and a lack of direct, verbal communication. Takeo’s a nice guy who doesn’t want to put any pressure on Yamato, so rather than let her know how excited he is about receiving chocolate, he keeps mum (or tries to, anyway) so she won’t feel like she has to do anything special for him. But then their V-Day comes to an end and Yamato dashes off without giving him anything, and Takeo is left to wobble up lampposts and into vending machines, trying to figure out where he went wrong or if this is “just how things are” when you’re dating someone.

Takeo’s heart’s in the right place—I’m sure we’ve all seen V-Day wreck people’s nerves because they feel like they have to destroy their budgets and/or come up with some creative, grand romantic gesture—but he ends up almost making himself miserable in exchange for doing what he thinks will make Yamato happy, and that’s no good, either. Plus, I mean, it’s always nice to know someone’s excited for something you’re going to do for them, and I’m sure Yamato would’ve been pleased to know he was looking forward to her gift. 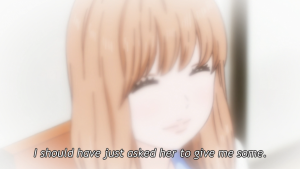 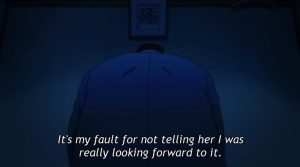 Of course, Yamato was planning on giving him something special, but I’m glad OreMono let Takeo have that little revelation above before she did. It gives the episode two sort-of morals: One, that you shouldn’t expect people to read your thoughts; and two, that sometimes people will read your thoughts and it’s really sweet and nice when they do. In this case that sweet and nice takes the form of a three-tiered rounded monstrosity of sugar, which leads to:

Don’t worry, dear readers, I haven’t forgotten That Ending. While the bulk of the episode was about chocolate, our finale was all about Suna-min Rolls. For Suna, Valentine’s Day is a huge hassle: Not only does he receive a metric ton of gifts from people he clearly doesn’t interact with, but he’s so polite that he makes it a point to give thank-you chocolate to anyone who writes their name on the package. And at this point he just can’t see it going any further than that because he’s never “clicked” with someone the way TakeYama did.

Just because I haven’t mentioned it in a while, I love how OreMono often uses Suna as a gender-flipped “hot girl” archetype, showing how people of all genders can be objectified as “just a pretty face” by others. But more to the point, there’s a girl who’s been giving Suna chocolates since freaking elementary school who never asks for any chocolate in return—and it looks like she’s about to join the cast. 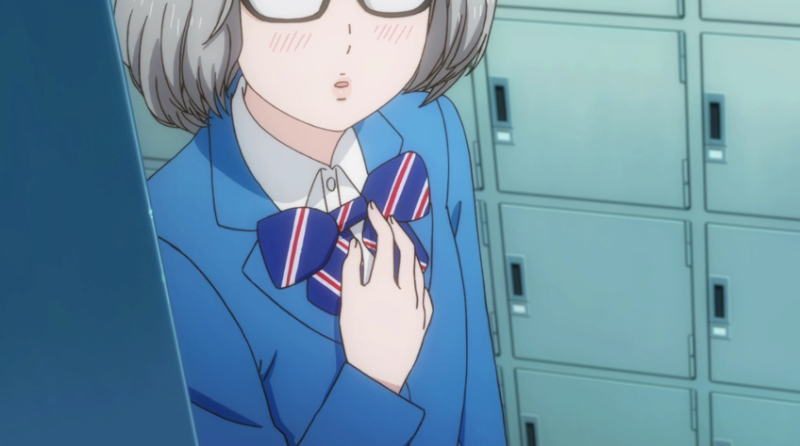 As you know, I’ve been pushing pretty hard for Suna to stay single or at least remain asexual-coded, but I also want him to frolic happily into the sunset surrounded by butterflies and rainbows and good reading material, so I’m withholding all opinions on this development until we see it actually happen. Will OreMono’s final (love) story be about the world’s greatest wingman? We’ve got four episodes left to find out.

Just a couple random things I enjoyed and then we’ll get into the main after-episode feature:

The Sensei Next Door: V-Day (and W-Day) Edition 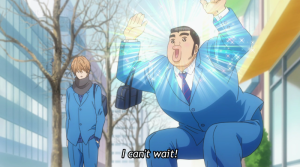 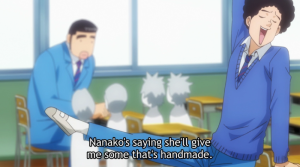 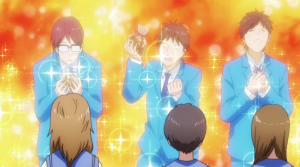 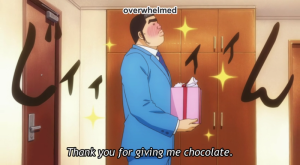 A couple things to know about Japanese Valentine’s Day: First, there’s a distinction made between giving chocolate to someone for whom you have romantic feelings (honmei-choco; literally “true feeling chocolate”) and someone who you like, respect, or feel grateful towards (giri-choco; literally “obligation chocolate”). It’s a marketing ploy to earn candy companies more money, sure, but it also means single folks (like TakeYama’s friends) don’t have to feel completely left out, so that’s kinda nice.

Secondly, as Takeo tells his sister, it’s the day when girls specifically give chocolates to guys. To create some gender parity (and milk extra profits out of lovestruck teens), Japan celebrates a second holiday, White Day, that takes place on March 14, which is when guys give chocolates to girls. As Suna notes, it’s often a reciprocation thing, but sometimes guys do use it as a love confession the same way girls do. It tends to be more subdued and a lot of anime skip over it, but I hope we get to watch Takeo drag Suna around, trying to find Yamato the perfect gift, because I’m sure it would be adorbs.