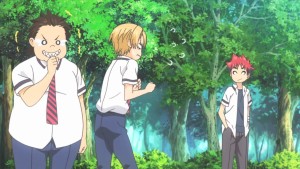 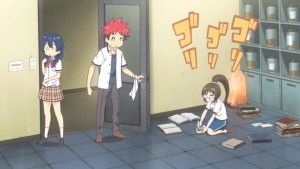 “I’m getting hyped!” Me too Soma, me too! With the Autumn elections almost upon us, we got the mandatory setup episode, and boy did it serve to make things just tingle with excitement. Its kind of fitting that spices and smell were the central focus of this week’s cooking foray, because this episode gave off a pretty inviting “smell” that served as nice hint of things to come. 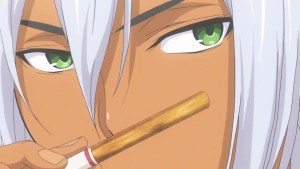 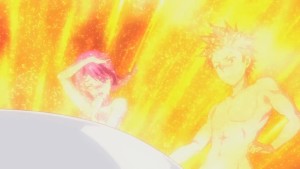 There’s a lot to be excited about with this upcoming arc. For one thing there’s both old and new characters that are being mixed in for a pretty interesting round of prelims. While we’re obviously quite attached to the staples like the Polar Star Dorm guys and people like Nikumi and the Aldini brothers, its the new character introductions that truly make the headlines this week.

The first of these is the rather physically strong and imposing Hojo Miyoko. I like the little bit of foreshadowing and setup that’s given to us via her meeting with Megumi. It seems that Miyoko will make for an interesting rival and opponent for Megumi. In a lot of ways, Miyoko and Megumi are the anti-thesis of one another. One’s brash, strong, loud and confident while the other is shy, nice, quiet and timid. And thanks to the events of the Summer Training Camp, it seems like Megumi’s gained some notoriety too. 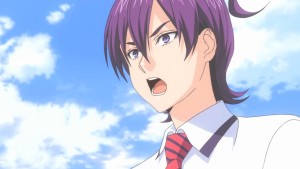 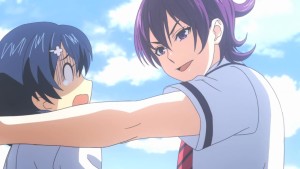 The most interesting aspect though, is how Miyoko’s interest in Megumi turns completely sour when she hears about Soma’s involvement. Megumi is just being humble, because the Shokugeki with Shinomiya was more or less her effort, with Soma just backing her up. That said, Megumi continues to stay in Soma’s shadow, and while Its not explicitly stated, I’m hoping that she’s in B Block and can do her own thing in the prelims.

The second major character was Hayama Akira, who seems like he’ll be the first big thing Soma faces in the Prelims. Both Akira and Soma are in the Group A block, and given Soma’s big declaration at the entrance ceremony and general notoriety, he’s obviously on Akira’s radar. 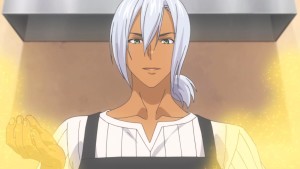 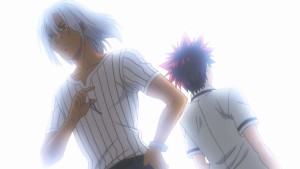 But the thing that makes Akira so interesting is that he’s obviously starting in a position of power. The first topic of the Prelims is a curry dish, and as the episode spells out, that’s Akira’s specialty. Akira has the super human nose that can distinguish between different spices based on their smell, and he uses that extraordinary sense of smell to enhance his cooking considerably.

Its kinda of outlandish, but its not the first time that Shokugeki no Soma has gone a bit beyond the realms of realism for its characters. And hey, you can’t deny that Akira’s particular talent wouldn’t be extremely useful to a cook. 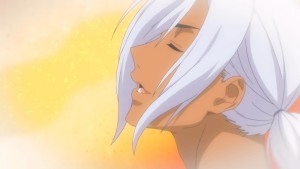 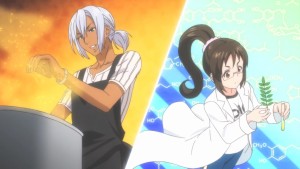 They do say that a big part of taste is the actual smell, and curry generally has pretty strong smells associated with it. As someone who’s heritage is from Pakistan, curry and spices are one of the main things that we cook (Alongside India). Spices in particular, are something that pretty much are infused in literally everything we cook, whether its curry, rice, or even simple things like Eggs.

In some ways, what’s most interesting about spices and curry is that its so different in spirit from traditional Japanese cooking. Japanese cooking leverages the natural flavors of its ingredients, and doesn’t quite rely on spices or other flavoring agents in the same way as some other cooking styles. 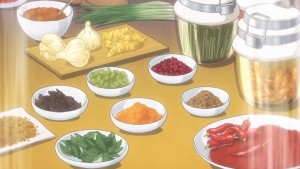 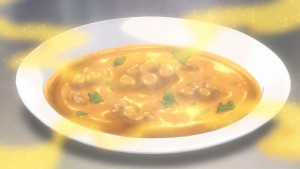 And I do mean traditional cooking(Ramen, Sushi, Rice e.t.c), because Japanese curry can be quite different. Having cooked both Indian/Pakistani style curry and Japanese curry, I’m actually quite fond of Japanese Curry, providing its on the more spicy side rather than the sweet side (I never can get behind mixing apples into Curry, for example! XD).

What I did like about this episode, was how accurate it was in representing just a FEW ways to cook curry. And while Akira showed off a way or two to cook curry and enhance the flavor of spices, I’d say the well is a lot deeper than that. 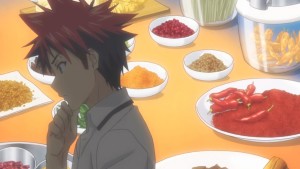 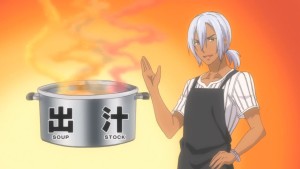 Something that I learned though? Using stock versus Water. That blew my mind. Whenever we Pakistani/Indian people generally cook, we never use stock in curry itself. Its always plain water, so seeing that the Japanese would use something like stock with curry was interesting. It was different, and it was something that I had never considered before XD

Now while curry is kind of everywhere in Indian/Pakistani cooking, its got a very distinctive and different feel in Japanese cooking. Given the preview we’ve gotten in the episode, I am very confident that Shokugeki no Soma is going to do it all justice. Currry is so vast, that it’ll be darn interesting to see the different ways that all the characters approach it, through their various nationalities and backgrounds. And I’m especially curious about how Soma will use his out of the box thinking to craft a unique curry dish. 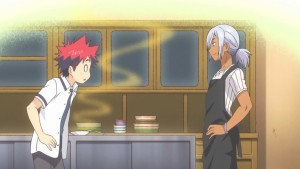 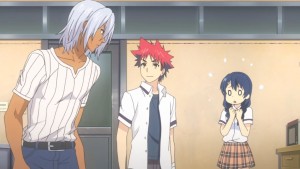 But while the actual cooking from Soma is going to be much later, I did like how accurately Akira analyzed Soma’s cooking. At the moment, its very unorthodox and adaptive, something that he changes and melds on the fly and infuses with his creativity. And that’s a pretty powerful talent he has, but I think when it comes to knowledge about things, that’s where Soma’s deficit lies. He needs to learn more, and to his credit, he really is trying.

It’s really telling that Soma decides to go early and learn more about Curry so he can make a better end product. That leads him to visit one of his Dad’s old Kouhai a woman named Jun. 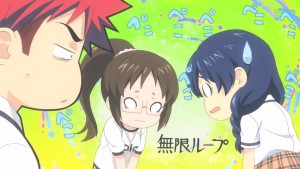 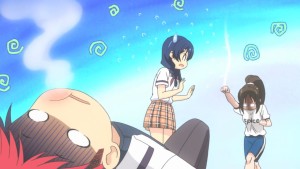 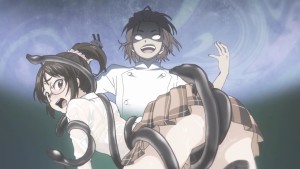 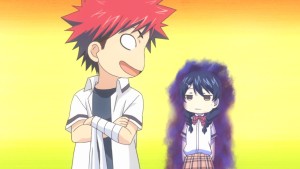 Jun is an interesting teacher and character. At first, she’s the shy, apologetic girl that’s almost a parrallel to Megumi, but when it comes to Jouichiro’s name? Oh man, the kid gloves are off. She smacks Soma, and detests him because of all the “taste testing” Jouichiro put her through. And for a change, I found myself completely sympathizing with Jun, despite the fact that she was being rather unfair to Soma there.

I think the series has just done such a wonderful job of establishing Jouichiro’s nasty little habit, and I’m kind of amazed at how quickly my mind goes to: “Oh man that must’ve been horrible, look at what he’s made this nice shy woman into!” And to top it off, the friggin icing on  the cake is Soma non-challantly commenting on his dad’s abuse to his kouhai/junior while receiving a deadpan stare from Megumi in the background. Comedy gold! 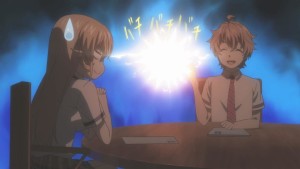 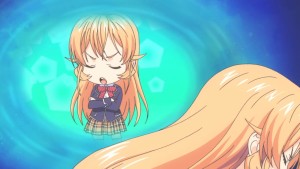 And while we’re on the topic of being unfair to Soma, lets segue into talking about Erina. Oh man, it was just another bad week for Erina’s character. With every week, I just continue to dislike her. Unlike say Jun, Soma hasn’t done anything entirely wrong to Erina, and yet she continues to try and sabotage him because she can’t get over being surprised by his cooking skills. I get that its her whole Tsundere act, and her trying to figure out the vexing feelings she gets from Soma, but the whole arrogance that emanates from her, makes me wonder… Do we NEED to see it and her on a weekly basis? *sigh*

At least for now, Erina doesn’t seem to be a part of the Elections, so I suppose we’ll see her more and more in the background, trying to screw Soma over. Its kind of unfortunate, but I think there’s enough characters in the Elections prelim rounds, that I think it’ll be okay. If nothing else, I think the series is at least really building up my want for Soma to wipe the floor with her, should they ever have a shokugeki. 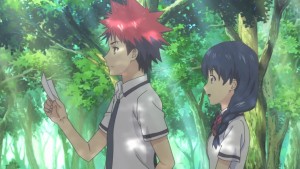 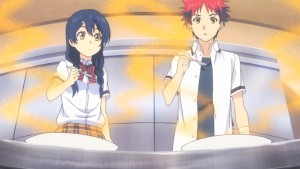 On the plus side, however, don’t think for a second that the shipping fanatic in me would let the whole Megumi x Soma hints pass me by. I think its pretty telling that Soma decides to take Megumi specifically with him when he goes to see Jun, despite the fact that it could’ve been a Polar Star Dorm trip too if he was just being nice.

Soma and Megumi are definitely growing closer, and given all that they’ve experienced together, the budding friendship feels very earned. Megumi in general plays off Soma so well, whether its being in the peanut gallery, the spot light, or giving him those dead pan stares of contempt. For every week where we get more horrible Erina stuff, my heart feels refreshed with all the positive Megumi development. I’m definitely team Megumi, so I think its great that her and Soma are getting closer. There’s at least one person that’s just a true well wisher for Soma, with no desire to “defeat” him, and that I think that, sets Megumi apart from literally everyone else in the cast. 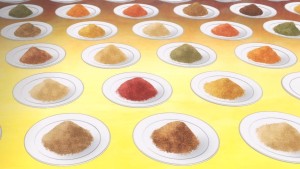 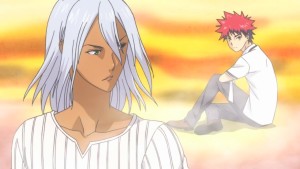 SO! Curry, spices, an overpowered opponent in Akira, Soma has quite the challenge setup for him. And I think that’s the best possible way that Shokugeki no Soma could’ve set up this arc. Its actually really gratifying, seeing Shokugeki no Soma fix that one issue that a lot of shounen anime seem to have. You know, that extreme strength of the protagonist and all that stuff.

It seems like Soma isn’t starting on an even playing field, but rather with the odds against him. Whenever that happens in this show, you know you’re in for some solid entertainment, and combined with this focus on curry, I think these last few episodes are going to be a fantastic ride! 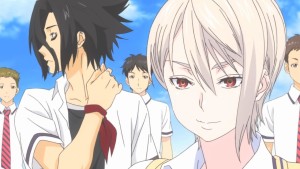 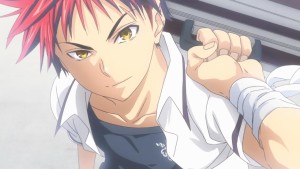 The Autumn Elections formally begin next week! In Mole voice: “I’m SO EXCITED!”