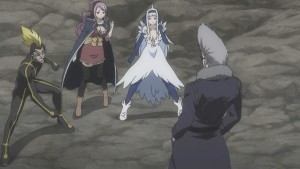 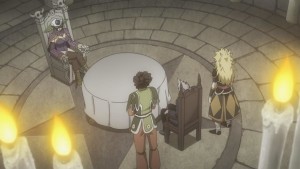 Seems like Hunter x Hunter isn’t the only shounen series to take odd detours during intense moments in story arcs. This week Fairy Tail had a mostly anime original episode, that served to flesh out what is sure to be a big player in the future, Crime Sorciere. 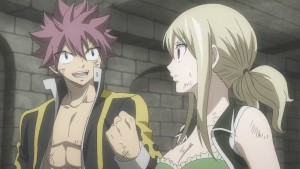 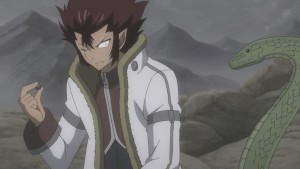 Its odd, that, despite what this episode was, I enjoyed it for what it was. I think one of the reasons this whole side story didn’t feel too distracting was that we got after the conclusion of the Franmalth fight. There’s not much momentum going from that, and while there’s the pressing issue of Mira’s big battle, I’m sure it’ll get its due.

I think the other thing is that, Fairy Tail has, with its latest arc, just won a lot of good will. It hasn’t pulled its punches, its given us nearly everything when we want it, rather than avoid the main issues and tease us like say Hunter x Hunter. I haven’t felt frustrated at all, so with all that good will, I’m okay with the series taking some time off from the main story to develop its auxiliary characters. 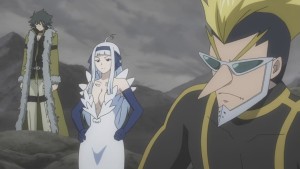 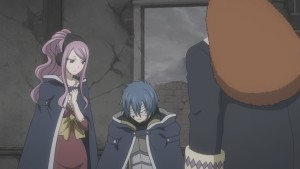 Now, with that all stated, its worth mentioning that the side story itself isn’t super impressive. The episode this week did two things, it served to actually make the whole Oracion Seis joining Jellal thing actually believable, and also pave the way for Rusty Rose to eventually join Jellal on his anti-Zeref mission.

The first of the two things worked a lot better for me. I wasn’t completely sold on why everyone from Oracion Seis was following Jellal, especially since all he did was injure himself and best them. As anyone can tell you, loyalty begotten from fear isn’t real loyalty. In order to truly have comrades beside him, Jellal had to win them over philosophically and through his actions. 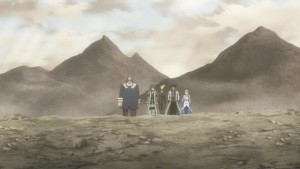 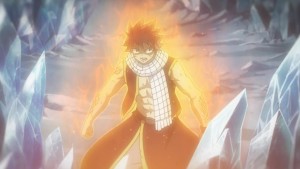 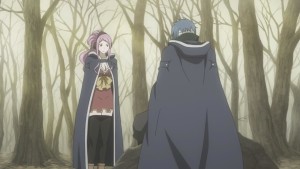 It’s kind of a letdown that Jellal’s reasons are not directly conveyed to the interested parties, and its done in the back handed way of Cobra listening in on Jellal and Meldy’s conversation. That said, it makes total sense that Jellal would feel responsible for Oracion Seis, since he was part of the whole Tower of Heaven thing. And I was happy to see that Ultear hadn’t absolved Jellal of his guilt over the whole thing. Whatever Ultear might say, it was indeed Jellal’s doing and decisions born of his own weakness.

And I think that’s the other thing that really links Jellal with all of his guild’s members. Whether its Oracion Seis, or Meldy from Grimoire Heart. Its the fact that they did terrible things, and were stopped before true disaster happened. And of course, they realized the error of their ways after a tussel with Fairy Tail. Its nice to see that Jellal keeps his encounter with Natsu close to his heart, because for all the punching and bashing that Natsu dishes out, its nice to see that his words have a profound enough effect that its  breeds some pretty kickass anti-heroes. Its always great when the story calls back to past moments and ties everything together nicely. 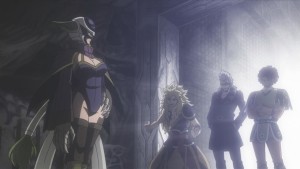 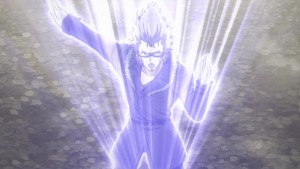 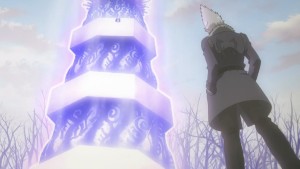 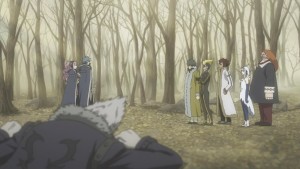 I do have to wonder though, was this really something we needed to see in the way we saw it. As an idea, its a pretty solid one, but I think we could easily see this later down the line as a flashback scene, rather than have an entire episode dedicated to it. And worse still, we had the horrible B-Plot of Rusty Rose tacked on to it all.

The whole thing with Rusty Rose and him storming into Tartaros, and being beaten down, was pretty pointless overall. There was another good idea in there, namely “what ever happened to Grimoire Heart?” but all it really showed us was what happened to Rusty Rose. There are other characters in that guild that are more interesting, and that I’d have liked to learn the final fates of. Instead, we got Rusty Rose flail around lost without his guild, and have him become the reason for Jellal and everyone to bond together and “move forward”. 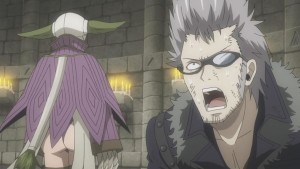 I’m not sure if this entire scene with Rusty Rose will pay off later in the series, but for now, it seemed like a pretty unnecessary segment. The one thing it did elude to, was Mard Geer, the Underworld King of Tartaros. We just barely got a peep at the guy, but it seems like he’s pulling the strings behind Tartaros. His whole appearance brings about a ton of questions. For one thing, he’s holding onto a book with END on it. And it seems like he’s talking to the book, and calling it Master. So is END’s true nature that of a book?

And more importantly, it seems like Kyouka doesn’t know about Mard Geer, and what he’s been doing. You see him in the background during her whole exchange with Rusty but it doesn’t seem like she’s aware of his presence. All of these questions are interesting, and I think if nothing else, ending with Mard Geer’s reveal was a sweet way to end the episode and bring back some of the momentum we lost this week. 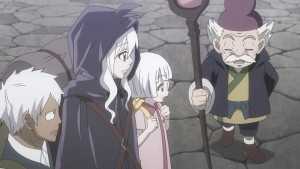 Alright! Now its time for the Mirajane battle to take focus next week. Lets do this!