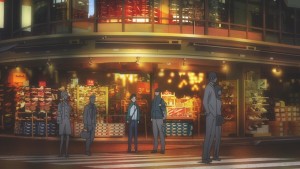 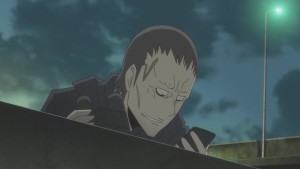 At this point, Durarara!!x2 very much is what it is. Its going through the story it wants to tell, at the pace it wants to go at, without much care for the audience. Is that uncompromising vision a good or a bad thing? I’m not exactly sure. 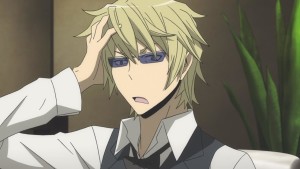 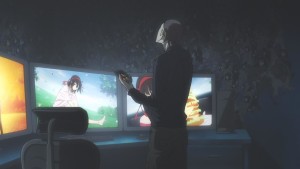 I think for me, Durarara!!x2 continues to walk the line between Decent and Great. Its definitely interesting and there’s some nice tidbits of info that we get per episode. Everything feels too subtle though. There’s an odd quietness to Durarara!!x2 that’s been there since the series came back, and that silence isn’t broken until the final moments of this week’s episode, when something truly noteworthy happens.

The major thing in this arc is the stalker, Adabashi but… I believe the real point of this whole stalker business is an excuse to establish Yodogiri Jinai as the true series villain. He’s the one pulling the strings behind the shadows with regards to Adabashi and seems to be a real threat. Yodogir’s also slowly amassing quite the collection of people that are out for his blood. 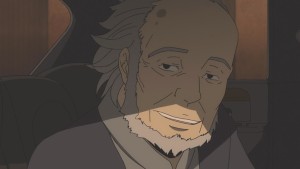 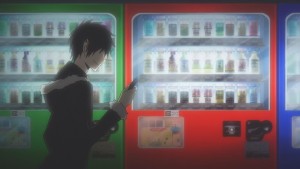 There’s Izaya, who we only briefly see this episode. You can bet good money that he’s moving to get even with Yodogiri. Then there is of course, Hajibe Ruri, and the rather dark past of hers that was pretty much all Yodogiri’s doing.

We get some good insight into Ruri’s past this week, and it seems that much like some of the other odd people in this series, Ruri too has some super natural powers. She can heal really fast, although its unclear whether she’s immortal or not, it does make a lot of sense as to why Saika starts freaking out when Anri is near her. 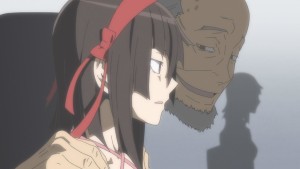 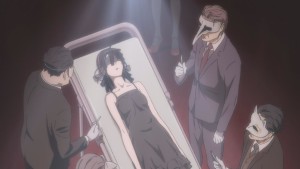 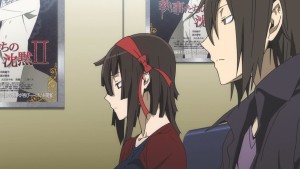 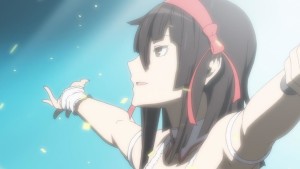 Yodigiri Jinai is the one who discovers Ruri as a young woman, who’s very much confused and has a chip on her shoulder regarding her grandmother. Things go south pretty quickly when Ruri meets Jinai though, culminating in the loss of her father. Not only that, but Jinai continues to use her as an Idol by blackmailing her. In the end, however, it seems that Ruri was able to escape Yodigiri Jinai’s grasp somehow (At the start of the last cour perhaps). Although, given that there’s the whole issue with Adabashi, she isn’t completely in the clear quite yet. And its Adabashi that actually serves as the device towards something of note happening.

The big moment, at the end of the episode, was when the stalker ends up breaking into Celty and Shinra’s apartment, and assaulting Shinra. Shinra’s being beaten to a bloody pulp, and while I don’t think he’ll quite die, I’m sure the whole thing is sure to leave some lasting effects. And all this happening after both Celty and Shinra had Mika look over their lack of security. 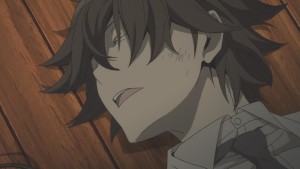 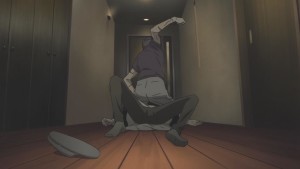 But, as I’ve mentioned before, the whole stalker situation isn’t where the real interest lies. Its an interesting distraction, one that provides insight into some characters, but its the other stuff that’s truly starting to motion towards better things.

Its obviously the Dollars stuff that’s the most interesting, and we get that in spades here and there. First and foremost, is Kadota’s meeting with Mikado. Like every other character who’s interacted with Mikado, the whole exchange just feels surreal and “off” to Kadota as well. 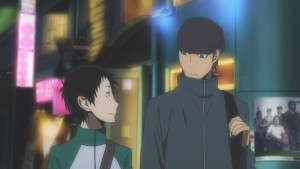 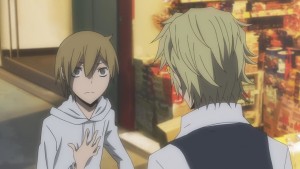 For one thing, Mikado doesn’t quite act like himself, and I think Kadota is right to assume that Mikado’s started to “go off the rails” as it were. What’s interesting is that while Kadota references Izaya and how he messed with Kida’s head in the last series, but Mikado’s changes are very much due to his own thinking.

Speaking of Kida, he makes a return this week, and his first order of business is to apologize to Shizou. Despite seemingly fatal inclinations, it does go over quite well. Kida receives a flick from Shizou and manages to live through the experience. Hopefully there’s no concussion or serious brain damage there, because that flick did hit him square in the forehead and send him flying back quite a bit. 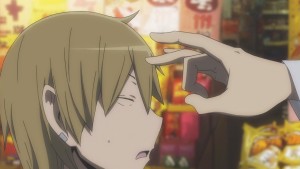 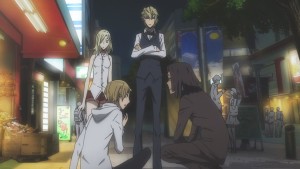 Its good that Shizou pretty much had the whole Yellow Scarves incident become water under the bridge, and it seems Kida at least gets a meal for all his trouble. Where this plot thread goes though? I’m quite curious to see.

And so there we have it. A bit of a short post, but there isn’t a lot more I want to say this week. I do think that once this Ruri stalker arc resolves, and we focus more on both the Dollars and Yodogiri Jinai plots, that things will definitely get more interesting. 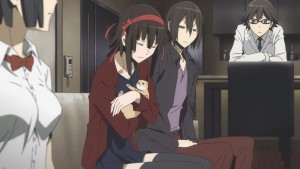 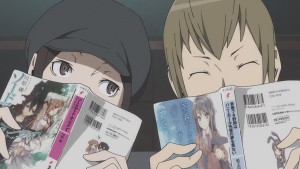 The fact that we’re 6 episodes away from this cour’s ending does have me worried, but well… Maybe Durarara!!x2’s third and final cour will deliver on all the setup we’ve had these last two cours. 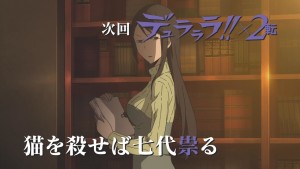 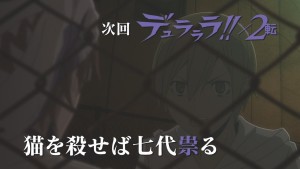 The Stalker situation resolves. Lets see how it all wraps up next week!