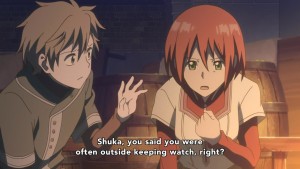 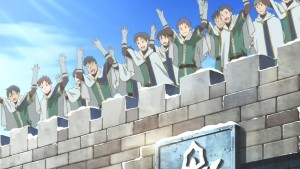 The regularly scheduled Shirayuki programming was interrupted this week for an episode that focused squarely on Zen’s side of the story. Both Shirayuki and Zen are at the heart of not only the story of the series, but its overall appeal too. Since last week had us setup Shirayuki’s side of the castle, along with a pretty interesting supporting cast, it was only fair that Zen got the spotlight this week. 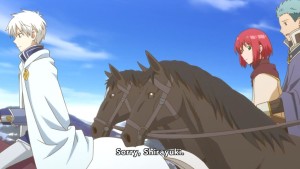 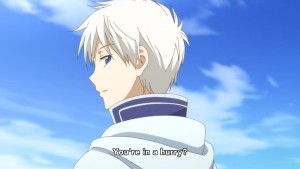 What’s more, is that Akagami no Shirayuki established a kind of duality to its story, as Zen’s prespective and way of looking at the world is definitely quite different from Shirayuki’s. The way he thinks, what drives him, its decidedly so different and yet so similar to Shirayuki that it creates this interesting Yin Yang relationship. Perhaps what’s most interesting to me, however, is that while I continue to love Shirayuki and Zen as characters, my ability to relate to them is near non-existant.

Its to the series credit that it’s created two really likable characters, and put them in a world that makes them such a markedly different and yet believable take on the idea of life. And to compliment it all, there’s that overwhelming feeling of calm, of ease… That tranquility that makes Akagami no Shirayuki-hime such a great escapist fantasy that both entertains and soothes. 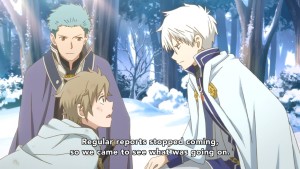 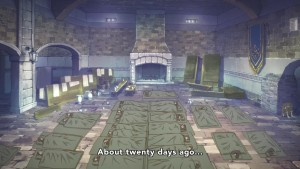 There’s never really a sense of danger, tension or unease emanating from this series. Even when things are pretty darn serious, there’s that overwhelming sense of peacefulness and unrelenting assurance that everything will be… Okay. Its kind of surreal in a way, how nice and relaxing this series can be.

That was doubly true this week, as Zen and his comrades, with a Shirayuki in tow, went to check on a Fort in the mountains. The soldiers from the fort hadn’t reported in for a while, and it was quickly revealed that a strange conscious robbing disease had overtaken the fort. Now… The idea of an epidemic like that spreading would be seriously bad news, but the way Zen and everyone reacts, with complete calmness and even a bit of recklessness is an odd sight to behold. 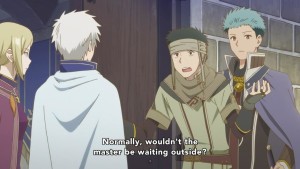 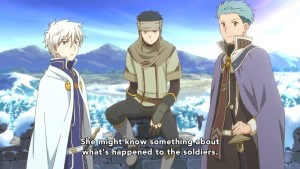 Its Obi that actually serves as the audience proxy this week, which is laced with irony in itself. The Ninja of the story asks the big questions that make so much sense. Why does Zen lead the charge to investigate the fort? Why does Mitsuhide let Zen do as he pleases and barely voices his opinion? Those are pretty important questions that lead to some really intriguing answers.

The first issue of course, is that for all of Zen’s great qualities, his stubbornness and recklessness are a pretty glaring flaw. We’ve seen the recklessness on display a bunch of times now, whether in the premiere, or in this episode. It does come out to be a big strength though, because whenever Zen is reckless or stubborn, its for someone else’s sake. Zen cares about his people, those who he leads, those who stand beside him, and of course, most of all, the woman he’s quite taken with… Shirayuki. 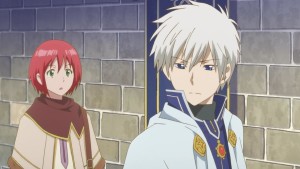 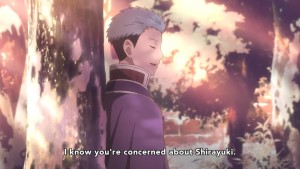 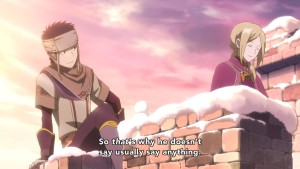 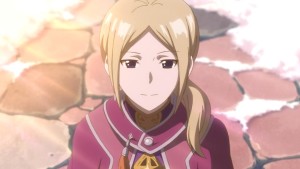 But that’s all pretty darn obvious at this point, so its the second bit that really adds something new to the mix. As Shirayuki and Zen get into an argument about him staying in the castle, its Mitsuhide that finally throws out the words that move Zen. And Zen listens too, revealing a rather deep bond of trust and dependance.

Zen is actually acutely aware of his faults, and thus relies on his two friends Mitsuhide and Kiki to steer him in the right direction and catch him if he starts to veer off track. There’s a sibling like bond between these three, and its one that’s built upon mutual adoration. Just as Zen is moved by Mitsuhide’s words, its Zen’s words that strike a chord with him and Kiki when they confront the bandits. 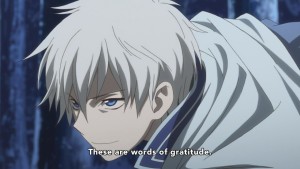 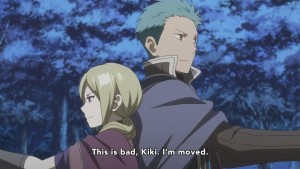 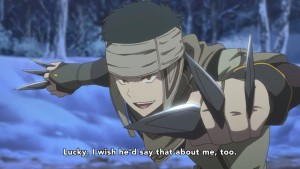 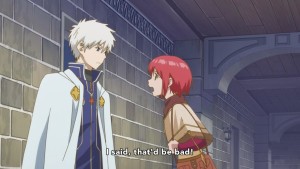 And much like Obi, I too had the whole feeling of “I wish he felt the same way about me”. Its to the story’s credit that it makes Zen such a likeable person, one that you’d LOVE to be close to. And of course, the same extends to Shirayuki too.

There’s also an element of frailty and need of protection that both main characters give off. They’re nice and passionate, to a fault. Much like Zen’s stubborness, Shirayuki selflessly overworks herself to treat all the soldiers in the fort. It gets so bad that Shirayuki ends up collapsing multiple times from pure lack of sleep. 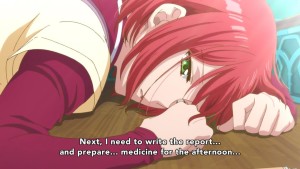 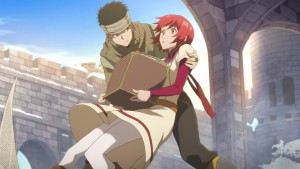 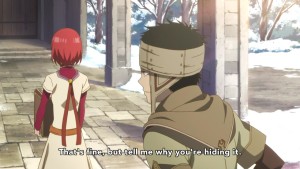 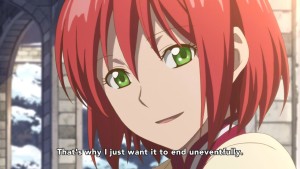 And its Obi again that serves as both the audience proxy and another reason for Shirayuki to just exhibit her good nature. When Shirayuki asks Obi to keep her exhaustion quiet, she doesn’t laud their previous encounter over him at all, something that impresses Obi as much as it does the audience. In some ways, watching Obi slowly grow his admiration for the two leads is just as feel good as everything else this series does. And given that Obi seems to be perhaps the strongest character in the cast, it makes sense that he fulfills “the protector from afar” role in this series.

Obi’s role in the story of being the character that gets to break into Zen and Shirayuki’s inner circle makes him probably the most envious character in the cast. At the same time though, there’s an inherent likable quality to him too and its a natural progression for him to align himself with the people that do indeed deserve his comradery and skills. 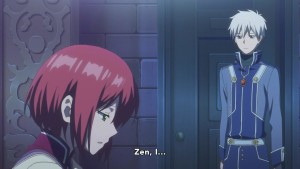 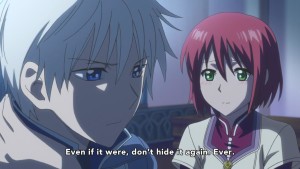 And while the relationships of characters like Obi and Mitsuhide are what we get more insight into this week, its the core relationship between Shirayuki and Zen that continues to melt the heart strings. Its a slow burn, but the two are getting closer and closer each week, and bolder too. There’s a very surreal, organic nature to the relationship. It feels effortless in a way that can only be described as Fairy tale like. And its a different kind of fairy tale too, than say something like Takeo and Yamato from OreMonogatari, where there’s some awkwardness and tension to be found.

Shirayuki and Zen though? They just work. They’re perfect for one another in a way that’s almost dream like. They both support each other, rely on one another, and equally adore and respect one another as well. So when Zen suddenly kisses Shirayuki’s hand, it doesn’t feel bold, or out of place, but just right. Its not exactly easy to feel, but there’s significant progress here too. 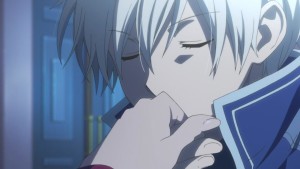 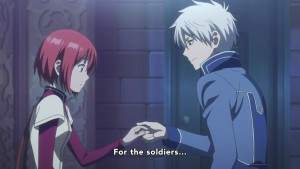 What Shirayuki and Zen say to one another, “You’re my reason for pressing forward”, that’s a pretty open declaration from both. Its not the beating around the bush kind of statement that Shirayuki and Zen have been uttering before, its a clear and direct statement of love. And it feels earned, because we’ve seen these two characters get to know each other, argue with one another, support one another and settle into the stage that they’re at now.

I’m sure that this calming, tranquil romance series isn’t for anyone, its certainly not for those that love anguish or gutt wrenching drama, but for me, this is bliss. Its something timeless, something that I can look into whenever I’m having a particularly bad day and just feel… Soothed and refreshed. That’s a quality I hope Akagami no Shirayuki-hime never loses, regardless of whether things get more serious or tense later on in the story. 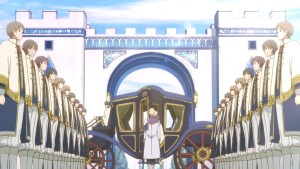 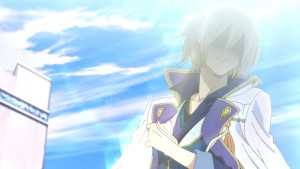 From the look of things though, it seems like some kind of tension is afoot, with the arrival of a certain Prince at the end of the episode. Lets see if this show truly changes gears next week, and if that fundamentally changes the show or keeps its refreshing and relaxing tone. 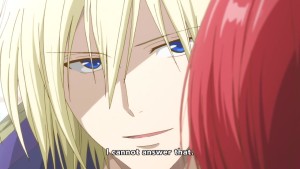 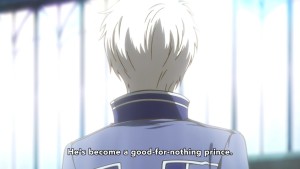 Speaking of things getting tense, it seems that we’re going to get some big brother conflicts next week!