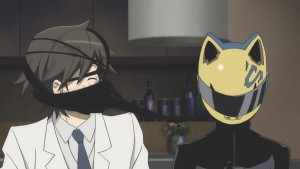 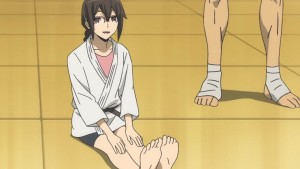 The curious case of the story that seems mismatched for an anime adaption continues. Much unlike the first series, Durarara!!x2 just feels like a story that would be better suited to its original light novel medium (a book) rather than the tv anime series that we’re getting now. 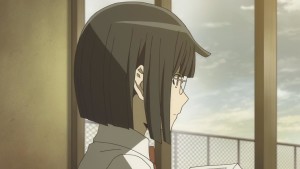 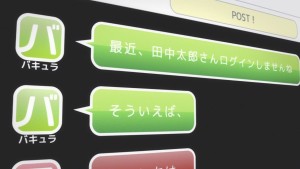 I can probably guess, him and haw about what exactly changed between the first series and this one. Did the some key staff member in the production staff not make it over from Brainsbase? Did the source material just decline in quality? I suppose I won’t know until I read the original light novels (which I plan to do at some point).

For now, what I can say is that Durarara!!x2 just isn’t a riveting show to watch even though some interesting things are technically happening on screen. In a rather unforunate turn of events, it seems like each scene we see in the anime is just too subtle and too wordy. There’s too much of a focus on dialogue and less of an event or action. I think one of the ways the first series got around this issue was by using a character to narrate the episode from bit to bit, and that worked really well. 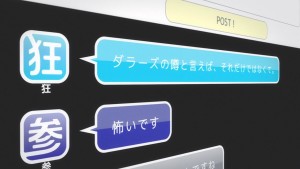 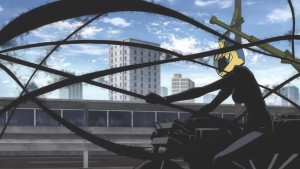 Now that the narration aspect is almost completely gone in this cour (it was briefly present in the first one), things are just kind of… happening, and nothing really feels impactful. Lets take a look at what happened this episode and dissect this a bit:

So first major thing, is we get TWO new characters introduced. The Martial arts sensei dude, who even Shizou respects as someone that’s seriously strong and impressive. There’s also the red haired woman that he apparently isn’t too crazy about, and we get a brief introduction to them this week as we see Akane-chan training at said dojo with the Izaya sisters. 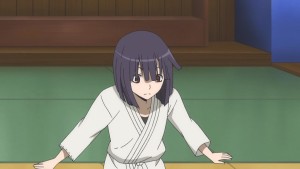 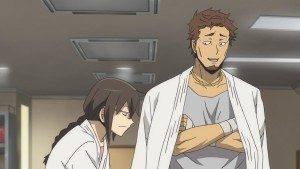 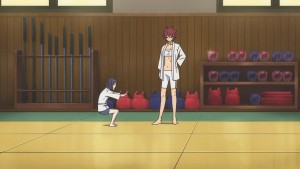 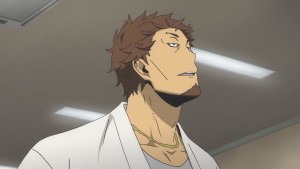 In the past, something like a character introduction would be given its due time. It wouldn’t just be a side thing that would be glossed over. In the best case scenario, you’d have the character narrate the episode themselves, and you’d see the world of Durarara!! through their unique perspective. At worst, you’d get what we got with Akabayashi, which was a generic narrator narrating his story and it just kind of playing out in an odd matter of fact kind of way.

The narration device was just something that Durarara!! did so darn well, its a shame that its abandoned one of its trademark tools. All that’s left then, is the interconnecting plot that ties all the seemingly unrelated characters together. 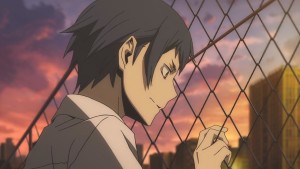 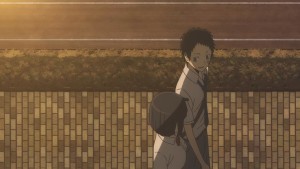 We haven’t had that in the last few episodes as much, as its mostly been self contained stories that were more or less happening at around the same time. Sometimes it worked, sometimes it didn’t, independent of what characters we were seeing. The first cour improved things dramatically by bringing up a plot point that connected nearly all the major players together. So it stands to reason that once that happens in this cour, things will more or less pick up right?

Yes, I really do believe it will make things better. Problem is, we’re about 5 episodes into the second cour, almost halfway done, and that still hasn’t happened. We’re seeing signs now, the macguffin right now is the stalker that Hajibe Ruri (the idol by day, serial killer by night that got together with Shizou’s little brother) seems to have. This of course, means that Shizou and his entire part of the cast gets involved but since Shizou left the Dollars, he can’t really help. 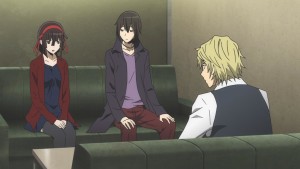 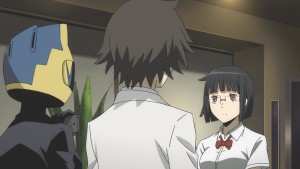 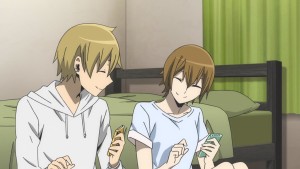 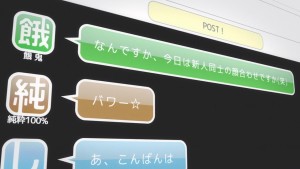 But! Shizou knows Celty, who is still in the Dollars, so he goes to her, and that connects another group (namely her, Anri and Shinra) to the plot. And of course, there are rumors about a group in the Dollars going around and “cleaning up” the misfits in the group through violence, which is more or less Aoba and his group. The bad rumors in turn, cause Kida to act and join the potential storyline as an active player.

Oh and, the chatroom, a long staple of the Durarara!! world has some new members. Kida’s girlfriend Saki, Shizou’s brother Kasuka e.t.c all are now part of the chatroom, while older members like Izaya and Mikado are nowhere to be seen. 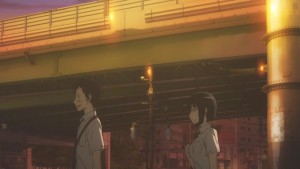 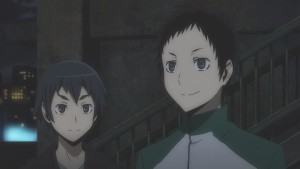 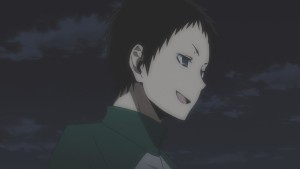 Ah yes! Then there’s Mikado, arguably the character that I’m most excited about. His whole “breaking point” and change is fascinating to watch, so much so that I wonder why the story doesn’t focus on THAT, rather than this other thing. The conflict with the Dollars, whatever Mikado’s big plan is, the darkness swallowing him, THOSE are the things that seem to be ripe for exploration.

Instead, we have the entire cast of characters more or less coming together because there’s a stalker on the loose? Not really a win for the story or characters and definitely not exciting. See, there is a good story buried in the background, one that’s slowly coming together. 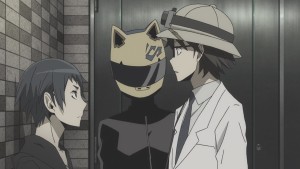 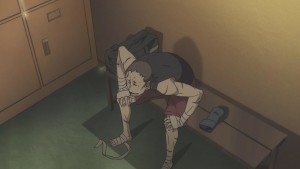 The bit with Aoba and what e-mail address he got, and whatever it is that Mikado is doing to “create a place” for Anri and Kida, that’s the good stuff. But its all taking a back seat to some truly uninteresting stuff. Izaya is nowhere to be seen, Mikado’s in the background, there’s no central villain or sense of conflict. There’s no high stakes either. There’s one stalker, which honestly, I feel like Ruri herself could very well dispatch.

Now, having said all of that, is Durarara!!x2 completely and utterly horrible? No, not really. For one thing, I’m still watching it week for week. I’m also writing about it week by week, but I think that’s more or less become an exercise and a sort of coping mechanism in dealing with the fact that its just not as good as the first series. 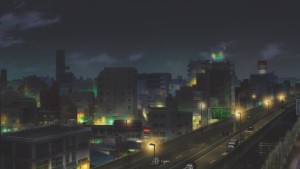 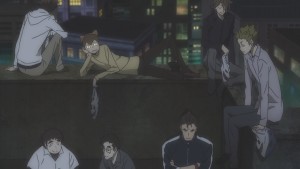 Taken on its own terms, Durarara!!x2 is just a slow, simple show that’s just not something to write home about. Its just something that has you check in for a bit each week, and then promptly forget about.

The fact that its forgettable, and just decent, is what’s so hard to swallow because of what franchise this story is a sequel to. Durarara!! was amazing, every episode was more or less the highlight of the week. It was an event, something that was on the level of some of the most exciting shows in anime history. 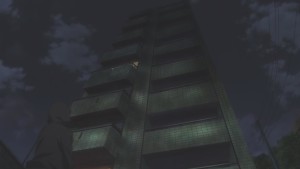 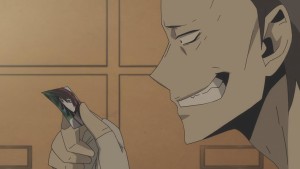 When the sequel finally hit, a good few years later, I think many of us, including myself expected to get more of the awesomeness that we got from the first season. I’m hopeful that this story goes somewhere great but honestly, at this point its more or less abandoned the big series conflicts that it setup.

The whole Izaya having Celty’s head? That’s been more or less swept under the rug, and now there’s this Dollars thing, but its not getting much traction either. And honestly Durarara!!x2 needs to do SOMETHING and do it soon, or it very well will just continue to set in this rutt of mediocrity that its put itself in. 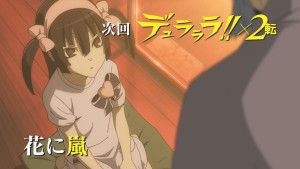 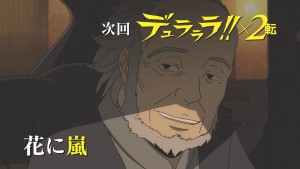 Seems like Ruri and the man who took down Izaya (Yodogiri Jinai) are going to take center stage. Lets see where this goes.