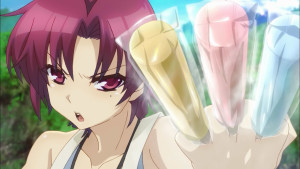 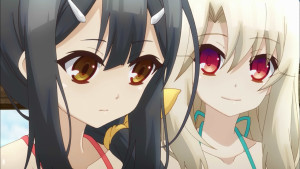 This week was all about the beach birthday party for Illya, Kuro, and Miyu. It was a pretty fun and entertaining episode. I got a few laughs along the way and just enjoyed the chaos that was having the groups connected to Illya mixing together. They even had time to meet up with ice-cream seller Bazett. Kind of funny that Luvia got her payback for the asskicking she took last season by basically bankrupting Bazett. She flexed the mighty financial power of her family and got some damage done. Of course Bazett will be fine even in poverty. She’s too important. She’ll still get ferried where she needs to go and if needed will probably get the damage of Luvia’s house passed on when the time is right. For now it’s pretty hilarious watching this badass character deal with the consequences of the fight last season.

In the end this episode was all about getting some laughs and they certainly did so. In a sense Miyu’s lack of experience playing on the beach or having birthdays really made for some interesting scenes. Her super spike during the silly bit of volleyball was epic. Even if she completely missed the point of the game, she was so spectacular that it worked anyways XD. Even without being transformed Miyu is tough. It was also pretty fun to run into the Gakumazawa family. Pretty random when you meet the entire family of a minor character like that. Tatsuko isn’t all that important, so does make for a funny scene when we get to see her whole family working at that beach restaurant. 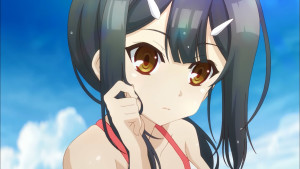 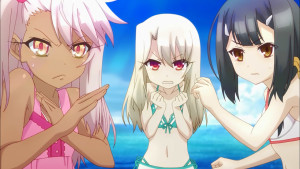 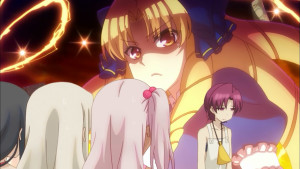 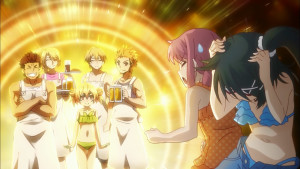 The more serious aspects of the episode did come from Miyu. Once again you get this really odd feeling about this girl being something strange. Not having played at the beach is unusual anyways, but never having a birthday celebration? What has been going on in her life for that to be the case? The story she fed to Illya and Kuro seems like 50% truth and 50% not so much. Or at the very least the truth isn’t complete in her story about her past. Only going to the beach once and the first it wasn’t to play.

Then of course you have the story about living with her brother (similar to Shirou) and her father who passed away due to illness before she left to live with relatives. Not many comments about the current situation with her brother or anything else. There is obviously more going on and Kuro realizes that. I think she also makes a good point. While it might be easier to just play it safe, there are gains to be made by going into uglier territory. She can have a nice friendship with Kuro and Illya without telling them everything, but that may not be the best choice.

The discussion about the value of birthdays was nice. It’s not something you really think about. A birthday is a time to celebrate getting a bit older and spending time with people you care about. But if you haven’t really had one it’s hard to exactly describe the positives. Props to Shirou for getting that covered. Celebrating being born, thanks those who carried you, and reaffirm the life you’ve been living. That’s definitely something that will stick with Miyu for a long time. Nice bracelet presents he got for the girls. Something nice that they can keep with them and remember the day for. I think that birthday party meant the most to Kuro since she hasn’t really had the ability to enjoy one to this point. A big day for her to just enjoy the fact that she’s alive right here and now. 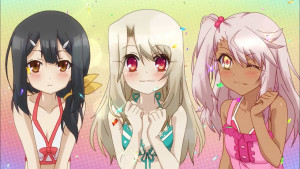 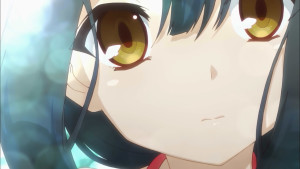 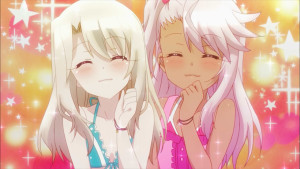 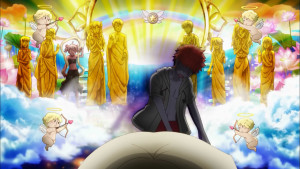 There was all that mess with Illya, Ruby, the love potion, and everyone just ganging up on Illya which was pretty hilarious to me. The Shirou Harem Effect was at full force here. It’s interesting seeing that kind of thing from the perspective of someone like Illya. She is part of Shirou’s life and does like him, but she only has a small picture of his entire life. This episode really brought out his high school life and the amount of girls that have their eyes on him. Even going to the point of Moriyama’s older sister getting mentioned. Some real chaos that’s for sure.

There’s not that much to say on the comedy, I found it a lot of fun and hilarious. Comedy isn’t really the easiest thing to comment on since it is so subjective. The truth serum’s effects were fun though. Him making points about not only seeing, but what he thought about Luvia and Rin was great XD. Definitely shook everyone up with that. But thanks to Sapphire everyone got memory wiped and no one was really hurt (except maybe Bazett and her pay). 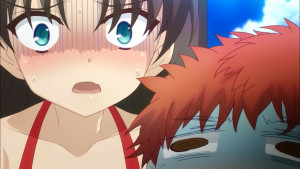 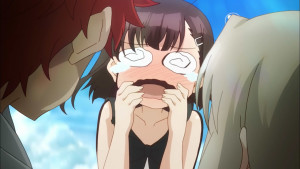 This was a really fun episode. It had some lighthearted fun, but also touched on some serious bits. The mystery of Miyu continues to deepen and I can’t wait to get the truth about her. It was a lot of fun, but literally the foundations are being set for the coming battle. Luvia and Rin are working on getting them to that 8th card and what is bound to be a massive conflict. They might as well have fun now since that is bound to be the toughest card they have faced.
Score: A