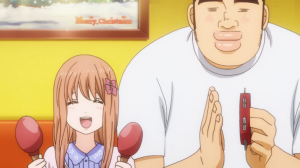 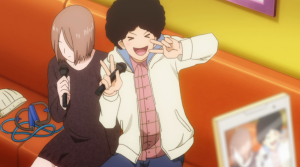 I always find it kind of awkward when shows have holiday episodes nowhere near the actual holiday. Presumably the original manga for this one was first published around December as a nice little single-chapter seasonal story, but the anime doesn’t have that luxury, so here we are with August on the horizon and nary a Christmas tree in sight. Ah, well. It’s not as if Director Asaka could’ve skipped it, given that it features Actual Plot Points, so I’ll just have to shake off my sense of seasonal disconnect and do my best to talk about the episode as-is.

OreMono does some fun stuff this week in terms of ignoring audience expectations, as the Christmas episode has almost nothing to do with Takeo and Yamato’s relationship and everything to do with a pair of recurring minor characters: Nanako and Kurihara. This may be Takeo’s (love) story, but that doesn’t mean other characters aren’t living their own stories just off-screen, and come to find out Nanako did in fact give Kurihara her contact info (despite initially ignoring him in “My Mountain”) and the two have been in touch. They even went to a movie one time and Kurihara held her hand(!!), but since he never followed up on it, Nanako’s not sure if it actually meant anything. 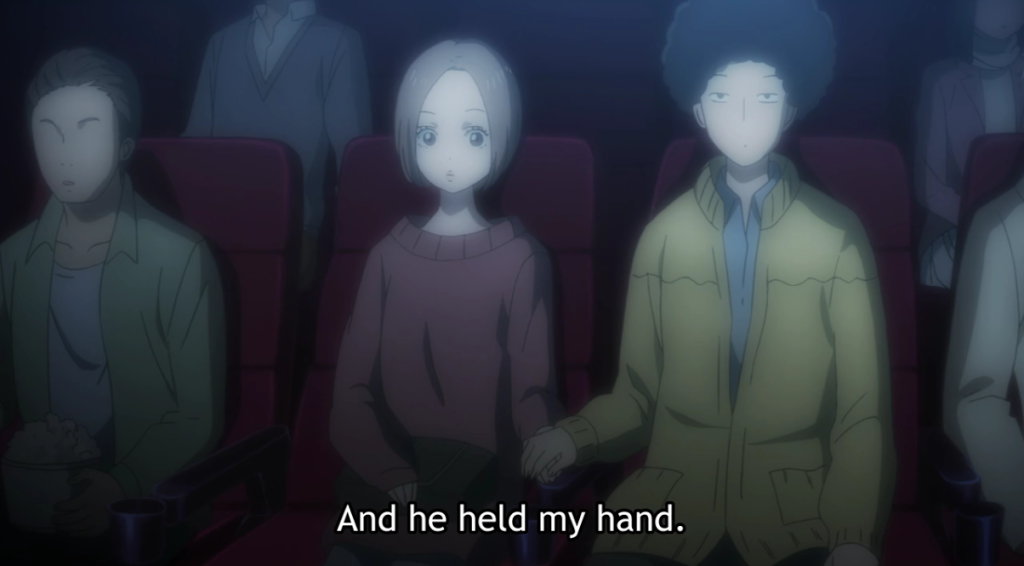 Yep, definitely gonna have The Beatles song in my head all day, now.

Which brings us to Christmas, and the group party that Takeo and Yamato plan for their two friend groups. Kurihara confesses to Takeo that he wants to ask Nanako to officially go out with him, Takeo shares the news with Yamato, and the two spend most of the party trying way too hard to play matchmaker. And meanwhile Kurihara keeps sending mixed signals about whether he sees Nanako as a friend or girlfriend, and Nanako doesn’t know how to express herself so she comes across as standoffish or outright hostile, and, well… 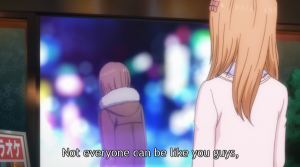 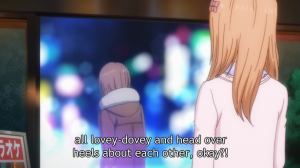 Now, the two do eventually end up together thanks to a Big Romantic Gesture (that would’ve ended with Kurihara in the hospital if not for Takeo), but if there’s a main point to this episode, then it’s probably that quote right there. Takeo and Yamato are kind of the Dream Team, and everyone involved in OreMono (writer and characters alike) know that.

Most relationships (especially among young adults) look a lot more like Nanako and Kurihara’s: Often awkward, often tense, and often stuffed with uncommunicated or badly communicated information. I don’t see these two as a good match, to be honest, but that’s part of dating, too. You like who you like, even if it doesn’t necessarily make sense. 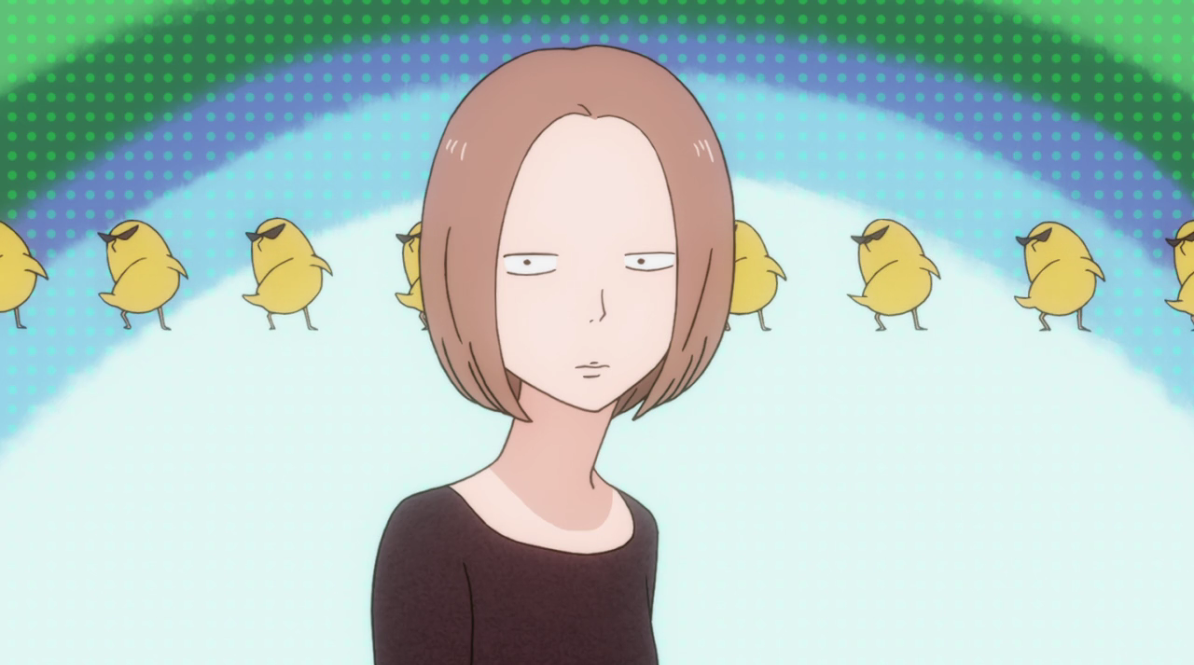 Petition to replace all ellipses with tiny shades-wearing chicks from now on.

What this episode did for me, personally, was make me glad we aren’t watching most high school relationships. Without a Suna around to gently nudge people in the right direction (Kurihara and Nanako are Takeo and Yamato’s friends, not Suna’s, so it’s not his place to speak up—and, frankly, I’m not sure he cares enough to expend the energy anyway) the teen angst escalates rather quickly. There’s an awful lot of manufactured drama this week, and an awful lot of characters trying to box people up into traditional gender roles (“be a man” is such an annoying phrase), much more so than we’ve gotten in past episodes.

From the girls just passively waiting to be “saved” from the stereotypical punks, to Nanako getting upset at Kurihara’s totally reasonable response to the situation, to Takeo agreeing with her that Kurihara should’ve tried to help even though it would’ve probably ended in disaster, there was a decent stretch this week that had me more annoyed than giddy. I’d say this is the most standard shojo rom-com we’ve seen in OreMono since the group’s first mixer. It’s not bad by any means, it’s just not all that inspired, nor what I want out of this particular (love) story. 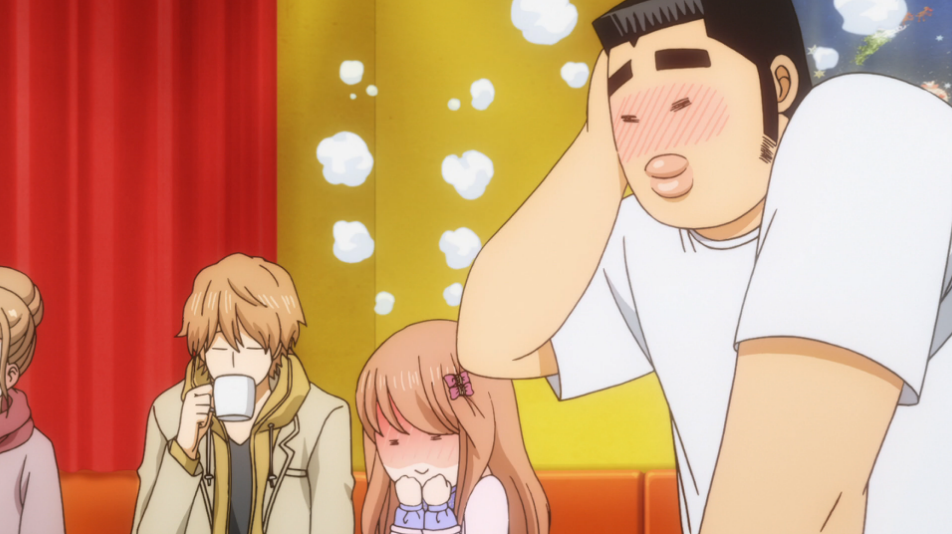 Now this—this is what I want out of this particular love story.

That said, there were a few things I quite liked about this one’s conclusion. First, that both Kurihara and Nanako admit they don’t fit the traditional gender role expectations which they themselves tried to uphold earlier in the episode. Nanako’s kind of mean, and Kurihara’s kind of a pushover. And that’s okay—they claim to like each other’s flaws and don’t necessarily want to change one another, even if they’re likely to butt heads over them in the future.

And second, the way Takeo and Yamato’s friendship arc worked out was pretty cute. They understand that they tried too hard to force their friends to be a perfect cutesy couple, and that their interference made the night a lot more awkward and dramatastic than it would have been otherwise. But even so, they aren’t the kind of people who can just stand by and watch their friends be miserable. 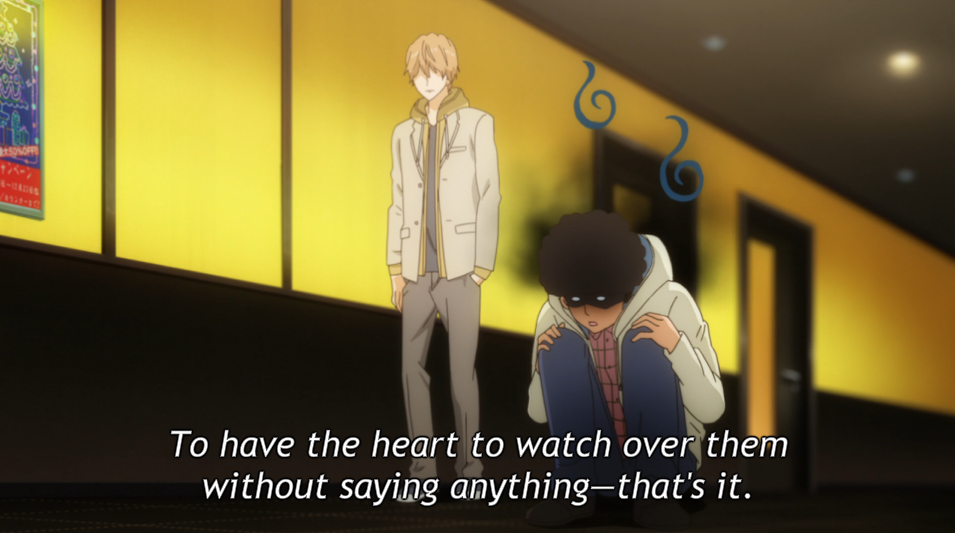 Honestly, dude, Suna’s just trying to figure out where the restroom is.

What Takeo finally realizes, I think, is that his role (much like what Suna’s done for him, Yamato, and Mariya) isn’t to force his friends into action, but to encourage them to consider what they want/need to do, and then to support them in the decisions they make. He shakes Kurihara from his funk and helps him with his starcatcher mission—but ultimately it’s Kurihara who has to do those things himself, not Takeo. Standard story lines aside, that’s a pretty nice little message to take away from an episode.