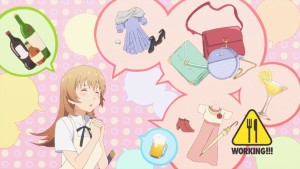 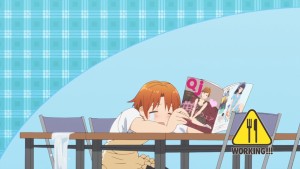 Its just so great when something you’ve been hoping for not only happens, but happens in a way that’s true to the very nature of the show it takes place in. Working!!!’s third season is slowly edging toward surpassing itself and giving us a bit more than just strong comedy. 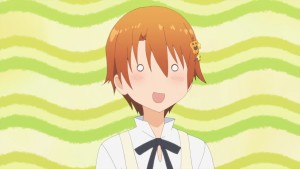 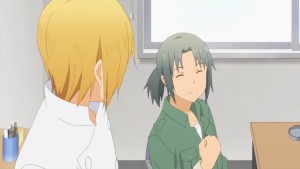 I confess, the comedy doesn’t make me laugh hard, but the chuckles and smiles are still there. I think the trade for the strong comedy is some character development and resolution, and that’s a trade I’ll take any day. As the closing season for the franchise, its more important that this season show us some progress and eventual resolution rather than just going straight for the laughs.

One of the big pillars of the Working!!! franchise has been the romantic tension between Satou and Yachiyou. This is a pretty strong potential couple to compliment the main Souta/Inami pairing, but Its no stretch to say that there’s been little progress on this front. And that’s why this episode is just so darn satisfying. 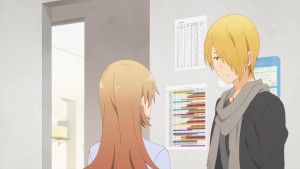 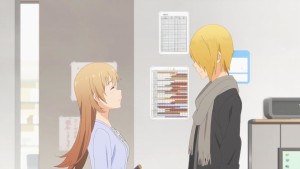 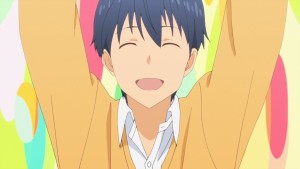 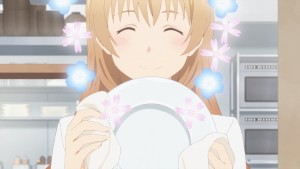 Satou, actually proves he’s quite the man, and asks Yachiyou out for drinks on their day off. Yachiyou still thinks its just going out to drinks with a friend, but the progress is unmistakable. Had the series devolved right into a big overdramatic romantic moment or rejection between the two, it just wouldn’t have been working, but another show entirely. The way this whole development was handeled, felting very much in line with everything else we’ve seen from this franchise.

To compliment the big event, there was some solid humor from Yachiyou prepping for this big outing. There were multiple: “Oh no!” moments during the episode, but the one that was perhaps the worst was when Yachiyou decided to ask advice from the drunk Takanashi sibling Kozoue on drinking etiquette. 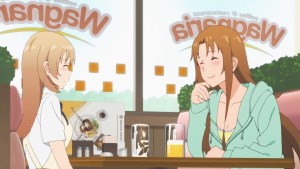 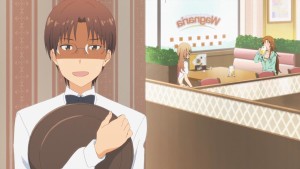 You could just see what was being setup for Satou to deal with, and the piling of misunderstandings. Funny stuff, especially the stuff about underwear and how the very pure and naive Yachiyou interpreted the advice she got.

Much like the audience, Souma got his kicks from the hilarity of the situation, and who wouldn’t? But what truly impressed me was how Souma was genuinely doing what was right for Satou and Yachiyou. You’d think he’d take the opportunity to mess with the both of them, but he actually did the right thing, multiple times. The bit about Souma not having any friends wasn’t exactly true, because I’d clearly describe his behavior and relationship with Satou as friendship. 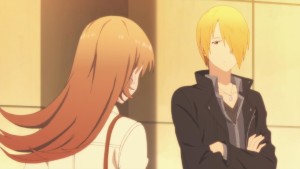 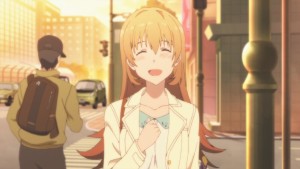 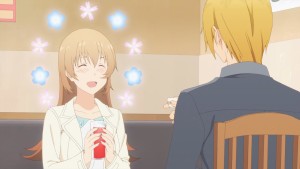 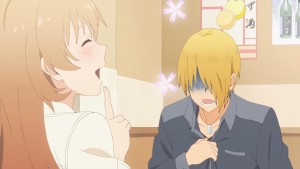 As for the date itself? It was pretty solid. Satou and Yachiyou made a good couple, and it seems like Yachiyou as a drunk just gushes more and more about her Kyouko-san, so there’s nothing new there. Then of course, we got the hilarious bits that Kozoue had clearly prepped Yahiyou for. Poor Satou, he probably felt a wealth of emotions that he truly wasn’t prepared for.

But the thing that I wasn’t prepared for, was the big moment between Kyouko and Satou. It started plainly enough, with Yachiyou just thanking Satou for the good time and invite, and how much she enjoyed it all. The preparation, the actual event and just how much of a nice guy Satou was. Then the words came: “Please stay with me forever, Satou-kun.” 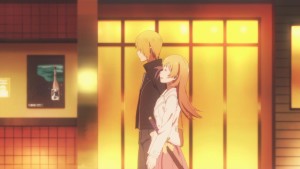 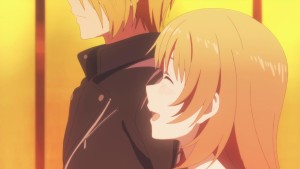 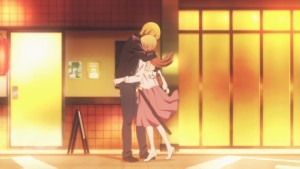 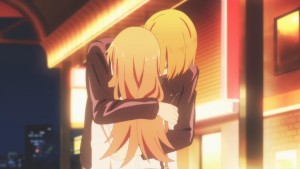 BANG! Any man hearing that from the woman he loves would melt at that. And boy does Satou respond! A powerful embrace and a “I too want to be with you forever!” line. MAAAN! As a fan of these two since the first season, and through all these years, this was the moment that just felt so… GOOD.

The payoff was the reason why the immediate moment following it was a bitter one. Satou recoiled a back, and said he had gone too far but meant what he want. His blaming his drunkeness was frustrating, because it seemed like Yachiyou had finally something to say, not to mention that she was genuinely pretty strongly effected by the whole thing. 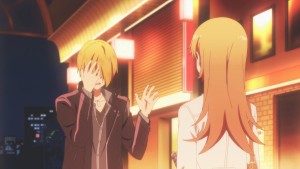 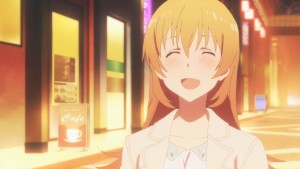 In the end, Yachiyou decided that it was just “the same old Satou-kun”, which means that the cool moment came and went, without any lasting effects… for now. The progress was there, the sparks flying, and I’m hoping this leads to a permanent answer later in the season.

But even if it doesn’t, I think the progress we got here was enough for us to infer the eventuality of it all. You can assume that this is the first step to the eventual Satou/Yachiyou relationship. Whether we see it or not, I’m inclined to be a true believer in it now. 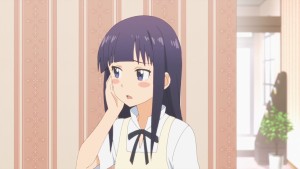 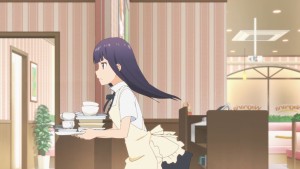 The B-Plot of the episode, regarding Yamada and her whole wanting to be pet by Souta was a bit more of a miss for me. It almost felt like fluff that was delaying the meat of the main Yachiyou/Satou plot, so I mostly wanted it to be over as soon as we got a whiff of it.

The only surprising bit was the fact that Yamada actually ended up working and working hard. That was a bit of a surprise, but otherwise everything else was pretty telegraphed and obvious. The part with Souta not being able to pet Yamada in the same way he would Popular was pretty expected. If anything, this whole b-plot highlighted the fact that there’s an elephant in the room that needs addressing; Inami and Souta. 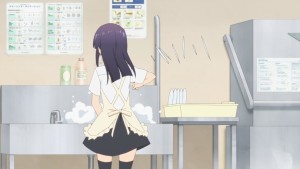 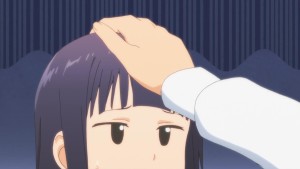 We’re only three episodes in, so I suppose there’s plenty of time to get to it, but I think we’re at the point now where we need some focus on the main couple of the show. Given how wonderful of a job the show did with Yachiyou and Satou’s progress, I’m pretty confident in the payoff we’ll get.

The question then, is HOW much of a resolution we’ll get for both plots. The minor plots like whether the Yamada siblings will ever reunite, whether Oto will ever find his wife e.t.c, I honestly could care less about. 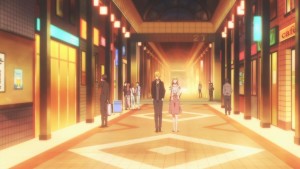 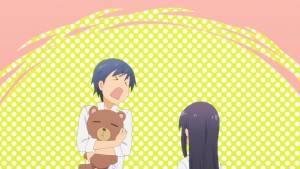 In any case, a solid third offering from Working!!!’s final season. Lets see where it goes from here. 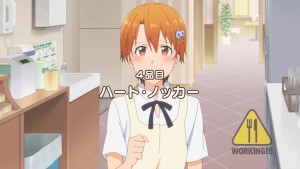 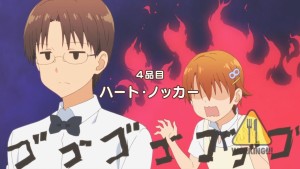 Seems like the Inami issue will take center stage next week. Its time!