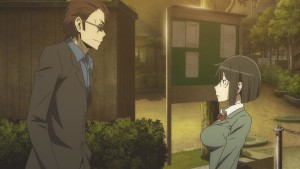 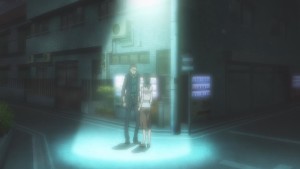 If I were to describe Durarara!!x2 in word I’d call it “slow”. Deathly, painfully slow. It seems that even though we’re 15 episodes into the second season, the series is still content with slow and intricate world building. And while the series may be content with it, I for one, am starting to feel more and more indifferent to it all. The characters, the story, the world, everything’s just not all that interesting.

I think I’ve long anguished about what’s so different about this season and the wonderful first season, and I think I finally have an answer. While the first season was definitely all about introducing characters and world building as well, it was interesting characters with really surprising and attention grabbing twists.

This week’s sole focus was Akabayashi, who made his debut this season. Akabayashi had a brief role in the first cour, and it was this week that the series tried to show us why he was relevant. Emphasis on tried.

Akabayashi’s relation to Anri, and Anri’s mother was no doubt an interesting one. There was an air of tragedy too, as Akabayashi ended up falling for a married woman that had been possessed by a demon sword. Then her deadbeat husband tried to kill her for drug money, and the Saika possessed woman killed her, leaving Anri all alone. It was Akabayashi that ended up caring for her past that point.

The real issue though, despite the decently strong story is that its giving us content and backstory to something that really doesn’t feel that important. Its a nice little idea, and reinforces the whole interconnected nature of Durararara!! and the gang/mafia part of the story. But at the end of the day it adds nothing particularly interesting to the mix.

In this particular case, it really does feel like this part of the story would work better as a novel, than an anime episode. Its the kind of thoughtful, contemplative narrative that you end up discovering and saying: “Huh… Interesting.”

Its not something that drives up the enthralling aspects or gets you super excited. Its just muddling the story when there’s so many characters that we’re getting depth and detail without much of an interesting conflict or issue at hand that has them shine. Why should I care about Akabayashi? Because he helped Anri out at some point? Because he was in love with Anri’s mother? Those aren’t altogether good points.

If anything, I’d rather have the focus be on Anri, on her part of the world, if not the more pressing matter of Mikado and the Dollars. It very much feels like Durarara!! x2 has taken a huge detour from its more interesting stories to flesh out auxiliary characters and a world that doesn’t need any more development.

The little nodd to last week’s whole Seiji issue near the end of the episode also clued us into the fact that we’re STILL at the same point in time that we were when this season opened up, and there’s still the Varona side of this whole thing to do. As an idea, this whole parrallel events thing SEEMS pretty neat, but in practice its just not working.

What’s truly perplexing is that Durarara!! had such a winning formulla already in season 1. ALL we need, is more of that. Small, interesting arcs that bring out the best of characters, rather than these stand alone development episodes.

From the looks of things, we’re not going to get anything truly meaningful this second cour either, so I guess I’ll just temper my expectations come next week.

For those of you still watching Durarara!! and reading these posts, I’d really like to hear your thoughts. Are you liking the show? If so why? And if you’re like me and sorely disappointed, then is it for the same reasons? 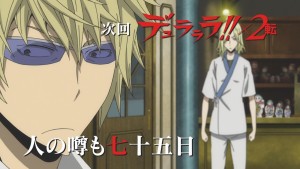 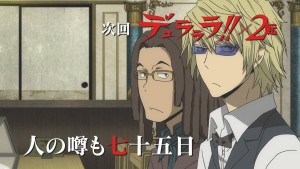 Its Varona’s side of the story next week. Given that Shizou will be making an appearance, I’m a bit hopeful for something interesting. Lets see if it pans out.