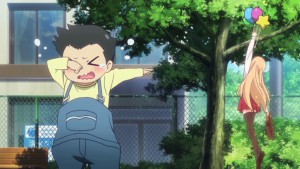 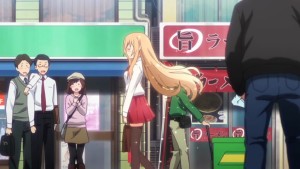 This is a series with a curious history for me. Some time back I had heard of the manga and gave it a try, but it got a bit boring for me, and I set it aside after the first 3 chapters or so. However, on hearing that an anime adaptation was going to be made I thought I would give it a another try, and pushed myself through the first 10-12 chapters and … it began to click. And after a few more chapters I began to get a glimpse of why it was clicking with me; simply, it was because after a little while we were shown a few insights into the characters themselves and a little of their back story, personality, and some of the meaning to a few of their actions. At this it became more interesting than “just another gag comedy 4koma series” and it actually reminded me a teensy bit of another “gag comedy 4koma series” whose anime adaptation (in the hands of the same studio producing Umaru-chan, I might add) I enjoyed very, very much: Mikakunin de Shinkoukei. 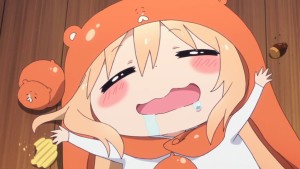 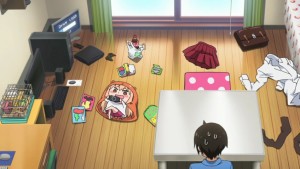 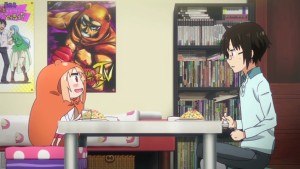 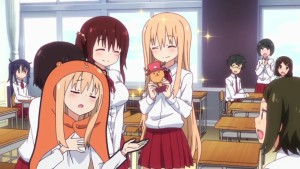 Well, the first episode did not disappoint. For those who are unfamiliar with the premise of the series here is a summary: “The series follows Doma Umaru, a high school girl who lives with her older brother Taihei. At school, Umaru appears to be the ideal student with good looks, top grades, and a lot of talent. Once she gets home, however, she reverts into a layabout who spends her time lying around, playing video games, and constantly depending on her older brother, much to Taihei’s dismay. ” Over the course of the first episode we are also introduced to a few other characters who seem slated to play a larger part in things to come, as well: Umaru’s close friend Ebina Nana (who lives in the apartment underneath Umaru); Umaru’s self-proclaimed academic and athletic rival in high school Tachibana Sylphynford, who is one of Umaru’s classmates; and finally Motoba Kirie, another classmate of Umaru’s who is a petite girl with an intense and intimidating gaze, yet who is actually very shy and has great respect and admiration for her. 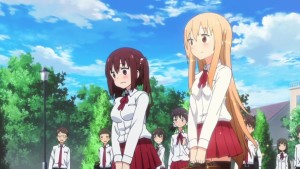 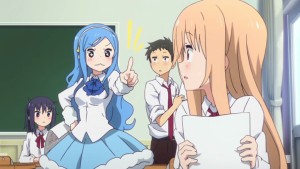 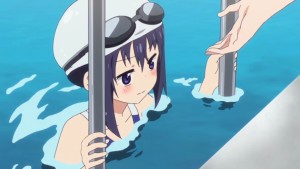 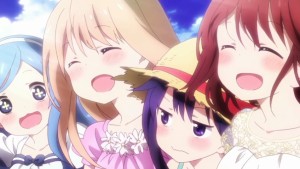 The studio that is handling this, as mentioned earlier, is Doga Kobo – a studio that has a good track record when it comes to comedies. Their particular style of fluid animation and “knack” for getting the timing of comedy in anime adaptations is on the mark in this series as well. (I thought the example of Umaru pouting publicly in the super market in the last of the “skit segments” was particularly efffective, for instance.) However they also know how to make good choices in adapting comedy series that differ from the source material and augment it at the same time – for instance in these chapters Umaru was shown “transforming” in and out of her chibi’fied and adult form a bit more than is in the manga (again shown at various times and different ways in the scenes when she was begging her older brother to go and purchase a copy of the latest manga edition), and I thought it was actually pretty effective overall. 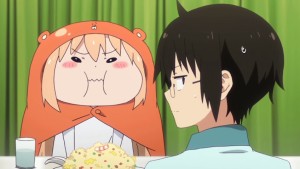 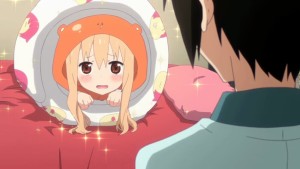 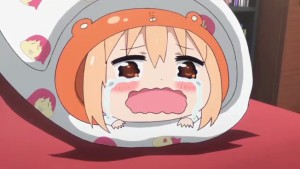 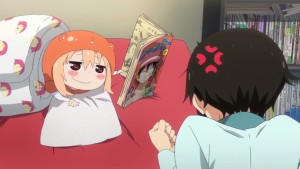 For me the anime adaptation is faithful content wiseto the manga, and I think the VA work is fine (I actually kinda like the ED more than the zany OP), the animation works, etc., etc. But somehow the overall impression of the manga as a whole was a little more like the OP – or so it seems to my memory. This adaptation was a little more “subdued” somehow, which kinda surprised me but also made me curious – if they cast future episodes in the same overall shades I wonder how the series might come across when all is said and done? I don’t feel it is a cacaphony, or “out of joint”. It just feels a little more … erm … ah yes, it feels like the story in the adaptation is being narrated a little more by Umaru when she is very happy inside in spending “normal” time (if playing zombie apocalypse video games can qualify as that) with her older brother – as contrasted with the story being told when she is moreso in playful, bratty mode. I am definitely enjoying this series, and probably would have considered blogging it if I were going to take on more than one series this season. 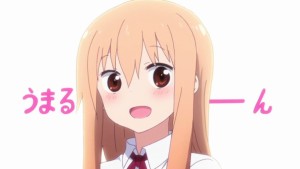