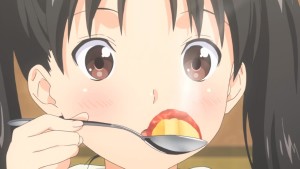 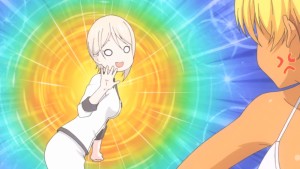 The lead in to the ED theme keeps getting longer and longer, and with it, the quality of this show just gets better and better. I think this is the first episode since the whole Shokugeki with Shinomiya that I’ve been this excited and on the edge of my seat. What’s really impressive is that this thrilling ride lasted for the bulk of the episode, and then relaxed into the conclusion for this Training Camp arc. 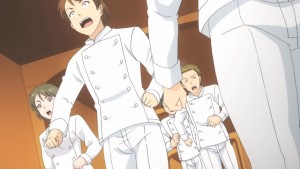 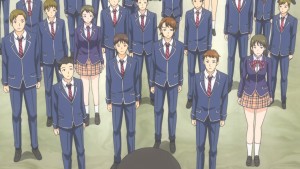 I think the big theme this week, and until now, has been around the purpose of Totsuki. I’m still of the mind that the whole setting is absurd and kind of insane, but for what its worth, I do get the idea behind it. This is a place where a gathering of the most insane, talented chefs happens. Its not even talent that’s enough, its a place where only the perfect and adaptable talent gather and perfect themselves.

In many ways, it kind of mirrors art school in college, where you really don’t actually go to learn, but rather to perform and refine your skills. The school assumes that you already are pretty good at the basics, and its now its about becoming something exceptional. 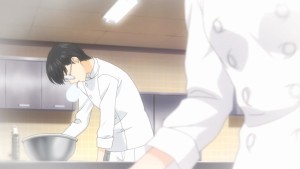 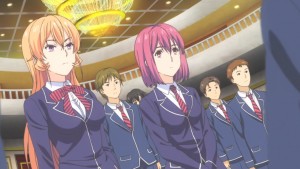 And in my opinion, there’s a lot wrong with that approach, but its something that’s prevalent in academia that focus on creative endeavors even here in the west. I can only imagine that it gets insane when its put through the lens of Japanese culture.

What’s ironic is the fact that most educational intuitions don’t GET the fact that failure is what breeds success. And that’s what makes this episode such a strong one. For all intents and purposes, Soma fails the basic idea behind this exercise. 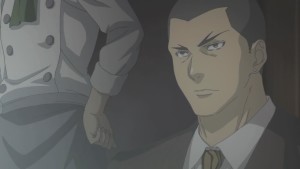 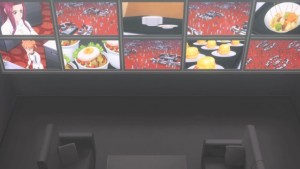 As Dojima mentions while he’s observing the students, the true purpose of the exercise is to visualize and personalize a unique dish FOR the buffet. Its as much about the customer experience as much as it is about the cooking itself. It goes back to the idea that we explored a few episodes back, that cooking is done for people, not in a vacuum.

How people are going to be eating your food, where, when? Those things matter. And Soma, due to his ignorance (as he himself points out), messes this whole equation up by choosing a dish that is time sensitive. 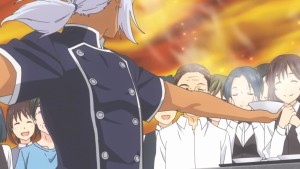 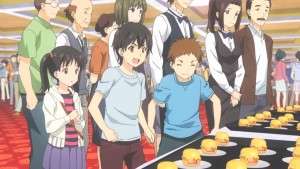 The other fact, that not even the episode itself talks about, is the fact that the challenge is as much about attracting customers to your table, and therefore competing for attention with the other students, as it is about the task itself.

That’s some pretty hardcore stuff to throw onto High school students. Taking the parallels from the Art world (since I was an art college student), the marketing and selling of your product is just as important as the product itself. Its a pretty important bit about being a working professional, and its kind of impressive (if still insane) that Totsuki throws stuff like this into its curriculum. 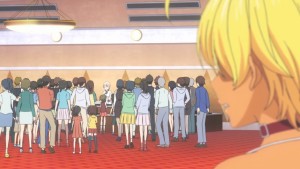 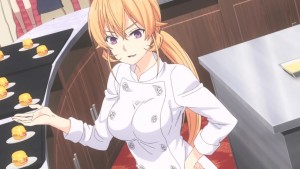 And indeed, As we saw last week, each of the students are able to draw customers based on their unique dishes. Whats impressive is how we see the white haired chick pretty much win in a second after she gets her first customer.

Her dishes may look ordinary, but that’s just the presentation. If there was ever an argument for food art, then I think the three egg set here just pretty much serves as some serious ammunition for it. Its a simple aesthetic, that actually looks to the simplicity and elegance of the egg itself, but creates stuff complex stuff like milkshakes, gellee made to look like egg white with a salmon roe “yolk” center. Man, just the sheer fanciness of it all made my head spin XD 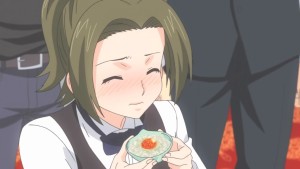 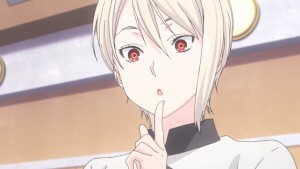 Oh and we get a name for the girl too, she’s Nakiri Alice, Erina’s cousin. It seems there’s an interesting rivalry between the two of them, mostly because Erina was an arrogant jerk even as a kid. But no surprises there. Erina is honestly not doing anything so far that’s made me even remotely think that the whole ship war should favor her.

But I will say, she did serve an interesting role of being next to Soma and therefore stealing his customers. But that’s when the real thrill for the episode began, when it shifted back towards Soma. 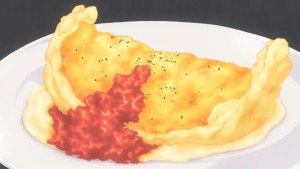 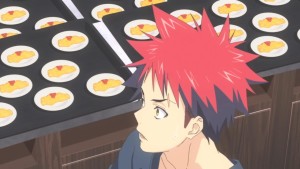 We learned early on, that Soma’s egg soufflé can’t work in a buffet because it only works soon after its cooked. This is one situation where Soma’s experience of working in a diner, where things are served immediately to customers, worked against him.

But Soma’s solution the problem? I quite enjoyed it. Soma’s major problem was the fact that he wasn’t getting any customers, especially with Erina next to him. So to fix that, he ended up putting on a performance to attract customers. As someone who loves performance cooking, I got chills. 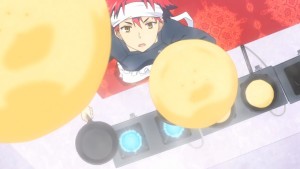 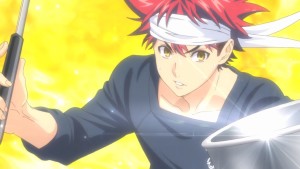 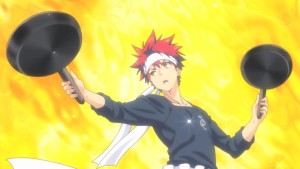 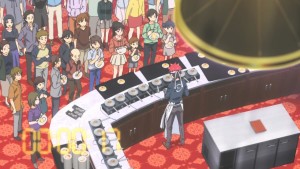 And yes, I admit, Soma’s super human cooking did bring the show back in to the realm of the absurd, but damn if it wasn’t fun to watch. That’s what matters really, if you’re having fun watching a show, and I can safely say that Shokugeki no Soma was just so darn endearing at this point.

The intense, rushing music, the animation, the art, the cuts, the choreography, everything just meshed so darn well together. With the clock counting down, and Soma getting faster and faster, I just got more and more pumped. In some ways, This show went into sports territory there, ratcheting up the excitement in the final moments. It didn’t matter that Soma was obviously going to make it, at that moment, the episode had me. It had me, and it didn’t let go until the clock had only 2 seconds left on it, and Soma just barely made it. 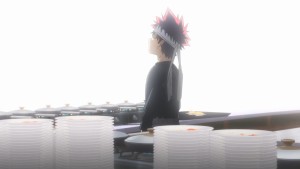 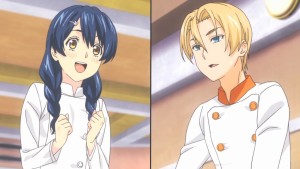 Man… What a high! I’ve often said that the best entertainment makes you “feel” something, and if an anime episode can make me get this excited, then well, mission accomplished.

Thankfully, despite being a bit smug about it, Soma didn’t actually run from the fact that he barely made it out through the skin of his teeth. I liked that, even after Alice’s provcation after the task was done, Soma reacted the way he should have. He had indeed barely made it through, and it had been a failure that had taught him something. 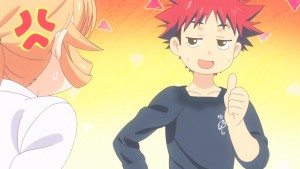 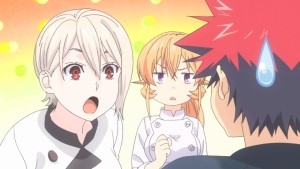 And going back to Alice for a second, I just find her a much more interesting character than Erina. I’m sure she’s being positioned as a villain, but I’d honestly rather have her in the ship wars than Erina. Erina’s just not a nice enough person for me to root for anything other than having her and her arrogance put in her place.

Now… While the highlight of the episode was most definitely Soma’s brush with failure and expulsion, the end of the episode had a pretty solid moment too. 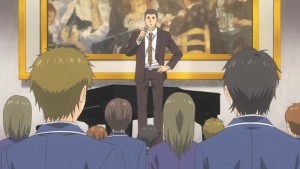 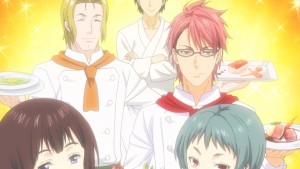 It was great to see that, despite how insane and weird Totsuki is, there is a sense of appreciation for those students that do meet their insane requirements. Getting a banquet prepared by the top chefs in the country? What human being wouldn’t want that? And I’d say that for all the insane amount of shit that the students had to deal with, Dojima and the other alumni at least acknowledged that and gave them the best reward they could.

Then there was Soma’s little reflective moment, which calls back to the arc’s central question; Is there a point to even going to school? I think both myself and Soma would argue that there is. School is where you meet (if you’re lucky enough) like-minded people who are just as passionate and interested about things as you are. Its where you expand your horizons and learn new things, and its the place where Soma’s already learned quite a bit. 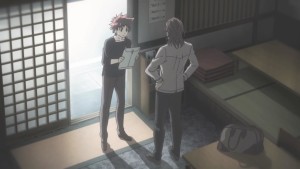 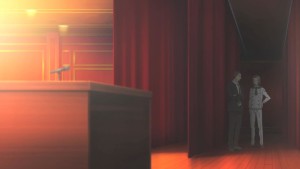 Beyond giving its main character some good character development, the episode also teased the next major arc; The Autumn elections. I’m assuming that’s where the Elite Ten are decided on, so that’s something to really look forward to.

And its at this point, with how good Shokugeki no Soma’s been lately, that the 24 episode count for the series starts to worry me a little. This is a longer story, and the manga is still ongoing. Given that its J.C staff, the best we can hope for is a second season down the line. I’m curious as to what we get for the remaining 10 episodes too, and I’m hopeful we get something substantial before the series ends.

One thing’s for sure, if the series continues this uphill climb, I am so in. 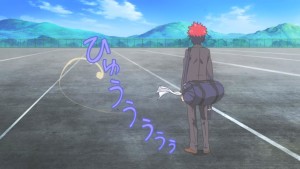 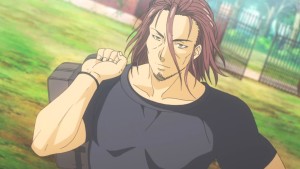 Seems like next week is all about Soma’s dad. Exciting stuff!