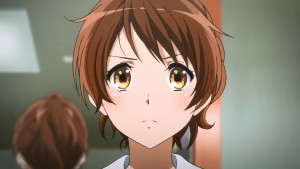 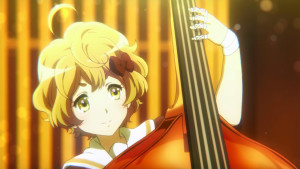 That’s what I’m talking about! That is how you end a series. You deliver one of your best episodes at the end and leave the series on a high point. They do everything I’d have hoped for in this episode. It gives us the huge performance. About 5.5 minutes of this episode is pure performance, and most of it is without comments or words or monologues. There is some of that in the episode, but it’s a pretty small amount. You get to hear what is going on and how they are performing. You also get to see on their faces the stress and feelings they are going through. I could just feel the stress and the effort being put forward and the episode did a great job pulling me in. I was completely enthralled in the performance. It felt intense and stressful which is probably what something like this should be for those playing.

I really thought they brought it in this one. As always the animation was great and everyone looked good as they were playing the best performances of their lives. I wasn’t sure how it was going to turn out to be honest. I could have seen them making it or falling short and there being great character development coming out of that. If they lost it would have been pretty ironic for Kumiko, but a moment she could share with the group. It’d also be something for them to want to overcome and aim for next year. Or they could win, continue the charge, and it’d be a moment of triumph for so many characters. I wasn’t sure what we were going to get. Though I did expect it would end right when it did, that we’d start with the performance that failed in middle school and end on the performance in high school. 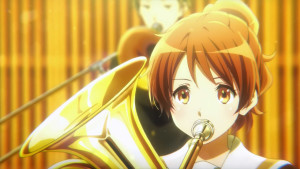 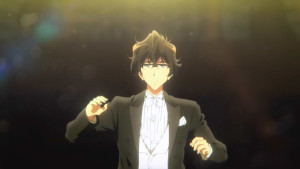 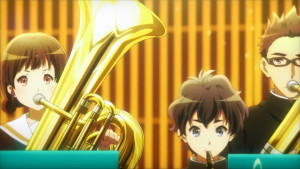 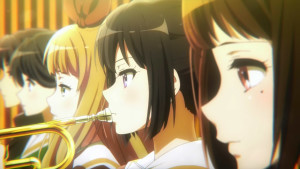 This show just ended well. That scene where they were sitting stressed and nervous before the banner rolled down was great. Then it came down, they saw they got the gold and everyone just lost it XD! It was great in how little dialogue they had there. You had Kumiko acknowledging they got the gold and just the reactions that followed. People breaking down in tears, hugging each other, Kumiko getting almost tackled by Reina, just awesome. They didn’t need to say more or have a deep conversation, just ending it like that and with Kumiko’s usual exit part just changed to “our piece goes on!” That itself was enough and a great way to end. That and following it up not with the usual ED, but rather the OP played with classical instruments. It was definitely a good finish to a show that’s been a lot of fun to watch.

Again the performance itself was just really well done. The nice little touches were good. I liked the little conversations between Hazuki and Natsuki. Them reacting positively to what was happening there and being really excited by the excellent performances. Though I think the moment that deserves attention was the solo for Reina. That was such a key moment and you can feel it helped put them over the top. I liked Kaori’s little acknowledgment that this was the right choice and that Reina was just too good to not get the solo. I was a bit tense watching and listening since I wasn’t sure what might happen. Drama could have dictated Reina making a mistake would have killed it. But instead she just had it perfectly done. The focus drawn to her, her fingers pushing down the valves, just a very well focused moment. Kumiko as well you could see was completely on her game and focused beyond belief. She was giving her all there and was doing her best to match up with Asuka. 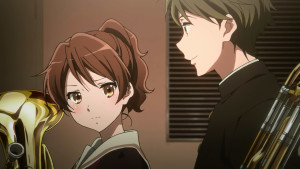 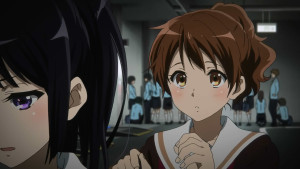 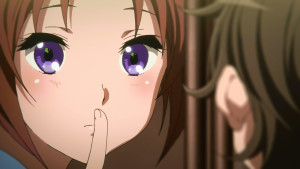 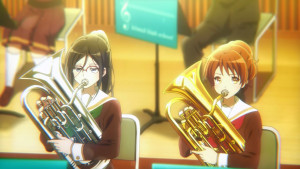 Speaking of Asuka, there was that rare moment of weakness on her part. That was curious to me. It did feel like she was thinking they might not pull this off and therefore it was the end. But at the same time…even after they were announced to be ok she seemed almost resigned rather than happy or pleased. I suppose we’ll never know unless I check out the novels or we get a second season, but it was interesting. Plus it was a rare moment for her to reach out to Kumiko. Actually acting like the other sempai who were calming people down. Not often you get to see Asuka like that and it gave a chance for Kumiko to vocalize her beliefs. Not saying that it’d be nice if they made it but saying they would make the nationals.

There was a lot of nice moments leading up to this. Finally Kumiko and Shuuichi got back to the ground floor of their friendship. Talking to each other and not having the silly moments of not dealing with each other. It was a good moment in general. It’d be interesting to see where things would go from here, but in the end we may never get that. At least they conversed and aren’t ending the series without getting back to that status quo.

The show continued to keep some focus on the connection with Kumiko and Reina and it’s pretty amazing how far they’ve come in 13 episodes. Goofing around on the train to the school as a way to relax and let of tension and even the hair tying scene. I think that showed how much trust exists between these two now. Generally I wouldn’t think people would let others get their hands on their hair unless they either trust the person or that person works at a hair salon XD. In the former case you kind of have to let the person. It was just a nice little scene with them quietly doing that before Natsuki showed up and had another good little moment with Kumiko. It’s pretty nice to see how Natsuki has gotten more active and reaching out to people. Becoming a really good role model and one that even Reina was impressed by. 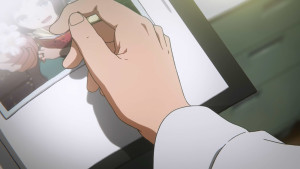 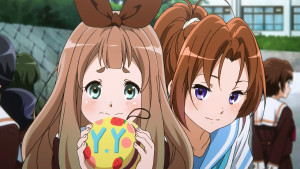 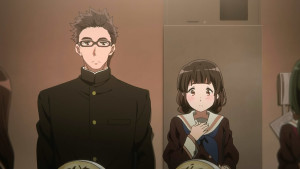 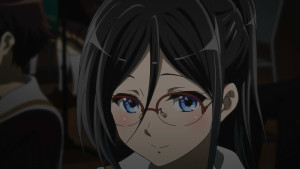 A little moment I found interesting was with Taki before leaving. Looking at a picture that was just vague enough and just out of frame enough that I’m not sure who it is. I could throw out numerous guesses that it was a girlfriend, or relative, or something. There just isn’t enough there. Certainly someone very important to him for him to be looking at that picture before heading to a performance that means a lot to him. Another little loose thread that would likely be covered in a future season. I’m glad the show is willing to cover these moments even if nothing ever comes of it.

I did like the pre-travel scenes for the band. It was a nice move by the group that isn’t participating to make those little good luck charms XD. A very nice action that shows that they are in this together. Plus it also reflect well on that group. One that could have been full of people angry they weren’t getting to perform, but instead filled with people who want to see this group succeed. A bit of unity is nice to see at times like these. 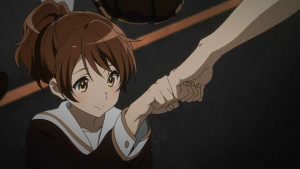 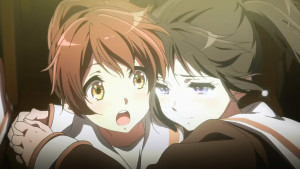 In the end they really did a great job with this last episode. The intensity was great and they really brought the emotion with this one. I felt very pulled into the episode and was feeling the tension with the group while they waited to find out their fate. The musical side was great. The characters all felt very developed at this stage, some of them miles ahead of where they were at the beginning. Kumiko had gone from someone who looked around her at people stressed not quite feeling that pressure to someone who was as stressed as anyone else. She could share the emotion Reina was having at the result instead of just being shocked at why she was so upset about it. A really good last episode that I can’t praise enough.
Score: A+ 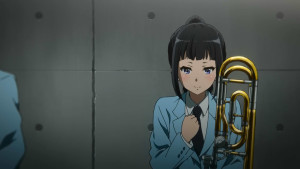 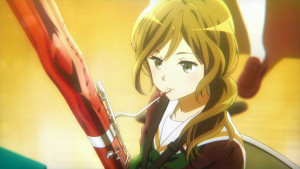 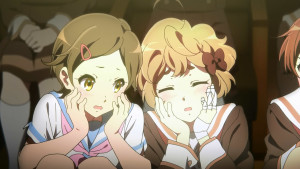 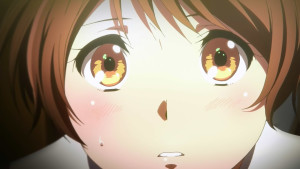 This really has been quite the amazing ride. I initially was just looking forward to this show because I played the Euphonium and it was a nice bit of coincidence. But this show really turned into one of if not the best show this season. Every episode just brought it with the emotion and drama. The cast had their pasts revealed slowly and you could see so many characters growing or at least becoming more understandable throughout. Even the tuba player couple had some time spent on them so you could appreciate why they loved the tuba and get a bit of a feel for their relationship. Kumiko really grew into someone who could admit how much she loved playing her instrument and wanting to get better. Even Reina grew a bit as we learned more about her personality and she really became closer to Kumiko. This show did a good job giving a large cast a pretty fair amount of character development. I’m sure there were moments that got missed out from the source material, but I’m ok with it since we got a great show regardless.

The show had a lot of strong character moments and I do enjoy that kind of thing. The visuals were of course outstanding throughout the show. There weren’t many if any moments I thought they really bungled it up visually. Characters, instruments, backgrounds, they were all getting enough attention to make this one of the better looking shows in my mind. And I just appreciate the attention to detail and effort to have things make sense. Characters performed to the level you expected, when people played there were mistakes. The show didn’t just toss on a soundtrack and expect you to believe they weren’t doing a good job just because people said they were. 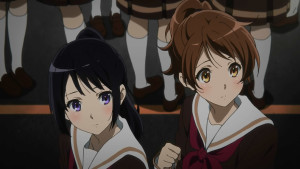 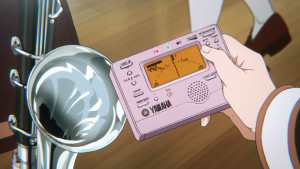 In the end I can’t say many bad things about this show. Every episode had me invested in what was going on and interested in seeing where the story would go. From the past of the band being revealed to Kumiko and Reina getting a real friendship built where there hadn’t really been one before. It was very much in the sports-anime kind of feel where you could feel the struggle characters had to improve and the drive to succeed. It wasn’t a smooth ride to that point which felt believable. The cast felt like solid individuals instead of just a collection of cliches. I had a lot of fun watching this show and it will be missed. It’s always nice when a show you look forward to is actually better than you could have imagined.