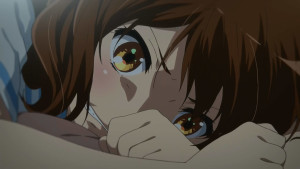 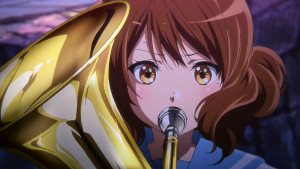 Ok this was definitely the crucial episode for Kumiko’s development. She’s had good moments throughout the show, but this was the one time the story decided to really heavily focus on her and she benefited a lot from that. This was a chance to really get into Kumiko’s head and watch her deal with her own difficulties. There has been a lot of focus on what other characters have been struggling with, but this was a chance for Kumiko to struggle a bit and fight through it. And things didn’t turn out perfectly which is believable, though there is still hope for her.

The amount of tension and pressure for this competition is something even I would struggle to relate to. You’d really have to apply it to something like a major exam or test to grasp the tension there. Kumiko just working herself extremely hard in order to try and capture that performance that she wants to reach. Just struggling with knowing what she wants to hear, but what she isn’t immediately getting. But that’s somewhat to be expected. Kumiko is fairly good and has years of experience, but she hasn’t exactly practiced herself to death over the years. Heck when this show started she wasn’t even planning on joining the band at all. Now she’s firing up the engines and trying to master pretty tricky sections. That’s not the easiest thing to pull off and it’s kind of a reminder that she is a first year and it’s not all smooth sailing. You can imagine Reina practiced constantly since that middle school performance, but Kumiko has started a bit later than that. 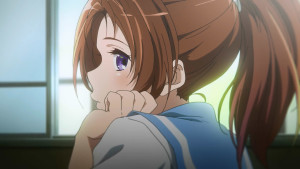 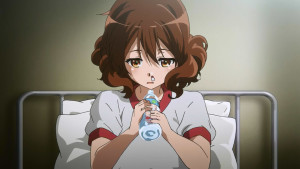 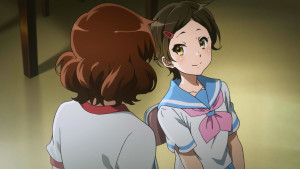 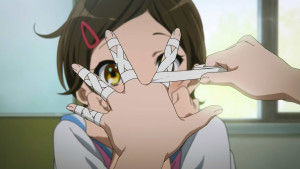 This was just a good episode to understand Kumiko better. The outright energy behind her desire to get better. Running madly through the streets just feeling the anguish of not reaching where she wanted to be and the extreme frustrations that come from that. It was a great scene since finally Kumiko has reached such a point. A point where she can openly admit that she wants to get better, she desperately wants to improve and it is killing her that she isn’t where she wants to be yet. It even gave her a feeling of finally getting how Reina felt back then, so utterly in anguish that she could die. It was just killing her. Somehow it also lead to a shouting match with Shuichi….steps towards getting along again I guess.

Friendship points though to Midori and Hazuki. They’ve been a bit less relevant since Reina has moved into top friend slot, but they were helpful there. Hurrying Kumiko to the nurse’s office to get help after her nosebleed. Finally a normal nosebleed that isn’t about someone being excited. I suppose it was caused by her being so dehydrated, only did a quick bit of research on nosebleed causes though XD. Just shows how into it she was that she didn’t bother to hydrate properly and ran into that problem. Luckily she had some backup and all was fine. They do make a fair point that Kumiko has been much more on fire and heated lately, but I think that passion was always there under the surface. She was just holding herself back a lot. 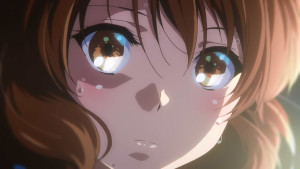 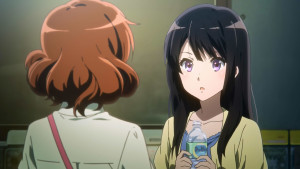 On the Reina front there was some good friendship moments there. Reina stepping in to practice with Kumiko a bit and even hearing her out after getting called out at a pretty random hour. You can just see how much closer those two have gotten as of late. Plus a very kind gesture to bring some water so Kumiko didn’t work herself to death. Also a nice little moment of understanding where Kumiko has also reached the point of wanting to be special herself. Of course Reina will want to go beyond even that, but it does show how both of them are really focused right now on doing this. Plus the end of the episode was hilarious with them. Kumiko dropping a suggestive bomb on Reina before going nuts over the Euphonium finally being added to that collection. It was a nice sign that sometimes things do go well and you are surprised. Finally she doesn’t have to just be satisfied having tuba-kun on her bag XD. Plus it was funny seeing Reina freak out a bit.

Was also just nice to see Reina have a bit of reconciliation with the trumpet section. She isn’t a crazy person who can’t get along with others. She just couldn’t help being completely serious about that audition. Even got a bit of a laugh with Natsuki getting the jump on Yuuko there. Progress being made little by little throughout the cast. 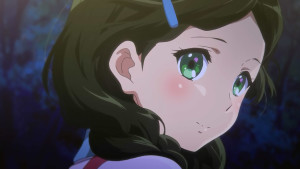 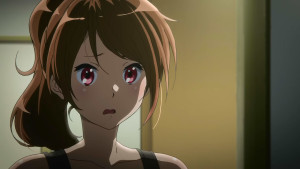 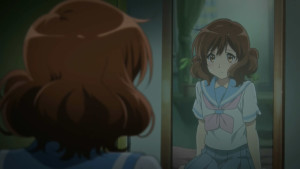 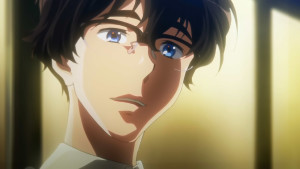 It was interesting to finally get to see how Kumiko’s sister ended up stopping playing and can guess at the effect that had on Kumiko. Her sister who she idolized and looked up to as a musician just dropped it all. She gave up on playing and put herself completely into studying. That’s not a terrible thing, but can guess that Kumiko became a heck of a lot more hesitant to express her enjoyment of music, even to herself from that point on. It was just something that her sister could give up on, it didn’t have any special meaning to her. In a sense it’s not surprising she compared it to Aoi. Both of them reached a similar end point, while Kumiko in this episode finally understood why she was different. She doesn’t just play for no reason, it’s because she really does love the euphonium that she does it. This episode finally had her able to just declare that openly, surprising even herself. It was something you could see on her face before. She always seemed to care for the euphonium even as she talked about wanting to switch or not wanting to get dragged into playing it again. Now she finally could see how she felt about it.

That lead nicely into a good scene with Taki. He had been hard on her at times, but he’s been pretty tough on everyone. Outside of the practice session he was much more calm while interacting with her. I do think it wouldn’t hurt for him to talk more outside of practice with band members so they can see how he is pretty human after all. Plus a good message left to her at the end there. He did take her off that part in practice, but he doesn’t want her to give up on practicing the part. She said she’d be able to play it in time and he was still willing to believe in that. That was enough of a push for her to be willing to keep on going for it. It wasn’t simply over because of what happened in practice. There’s no reason for her to give up on it and not keep working. She’s improved a lot on that section and there is still time to try and get there. 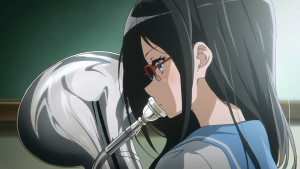 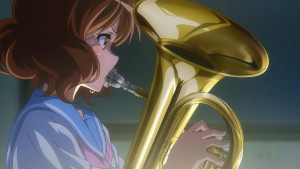 This was a really strong episode. Kumiko as the main character really just took herself to another level here. She struggled, she suffered, and she found something through all of it. How fast she can improve and her potential is unknown to me, but you can at least appreciate how hard she is pushing herself to reach it. Now that she can accept her drive and accept that she does love the euphonium, who knows. Also I just have to say that it’s amazing how much effort has been put into the performances in this show. You can literally hear the skill differences between characters like Asuka and Kumiko. They don’t just have a generic sound. Props to them. I can’t wait for the competition to come at last. Also I just have to say, it really is amazing how good this show looks sometimes. The instruments look great and so do the characters. So much effort put into this and it’s great to see.
Score: A+