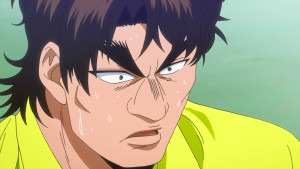 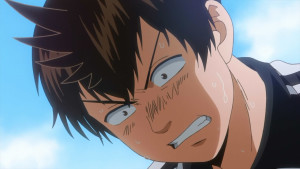 Whew, that was easily the best episode of Baby Steps Season 2 so far. This was just an amazingly intense match that pushed both players extremely hard. We got to see Maruo literally hit his limit in every way possible. He was driven right to the edge and gave everything he had. His mind was exhausted beyond belief, his body was pushed so hard that he literally collapsed after the match was over and he was just drained. This was an incredible match that showed that Maruo is on the level of Araya. In the end what cost him in this match was his inexperience with left-handed players. His mind had to be pushed constantly in order to try and comprehend the differences and to keep up. Maruo had to keep his brain running at 100% the whole time because he couldn’t take a break and leave it to his instincts.

The last part of the match where he was basically serving in brain-dead mode said it all. The pure relief of “oh…I don’t have to think to hit serves.” That gave him a second breath and created a chance, he could turn his brain off and just attack. Of course it did cost him since the second it turned into a rally his brain was needed to deal with the left-handed shots and he couldn’t switch gears at that point. It was over at that stage, but it was amazing to just see Ei-chan fight with everything he had. We hadn’t seen his limits after all the training and the improvements, but this was a match that showed everything. His game has gotten so much better and now he can play against people like Araya. It was a loss, but damn it was a spectacularly good one. 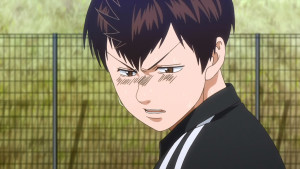 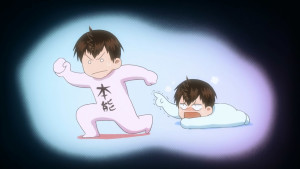 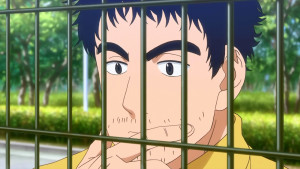 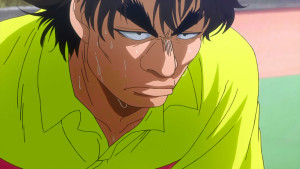 This was certainly the match that put Maruo on the map in a lot of people’s eyes. He was right there with Araya the whole time. He pushed him and almost took the win. I also like the focus on fun and showing just how Maruo does enjoy himself. He’s constantly thinking and pushing himself to his limits. His efforts constantly being made to adapt to what his opponent is doing and try to come up with strategies that will win the match. The flashback with Kageyama shows that Maruo is just that kind of person. He will throw himself into anything that catches his eyes and go from there. Be it soccer, school, or tennis. He just found something that truly fits him like a glove.

Seeing Iwasa again was good and I liked how he made a nice point there. Maruo may have been the person out there that was enjoying it the most and that enjoyment is a drive to improve. Of course the truth of the matter is that you have to win for it to matter and he didn’t win this time. It may have hurt to fall short, but at least Maruo didn’t lose completely. He gained a lot from this match and hopefully that can be channeled into his next tournament. 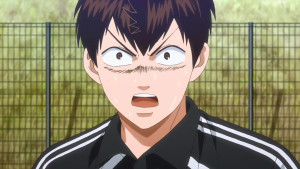 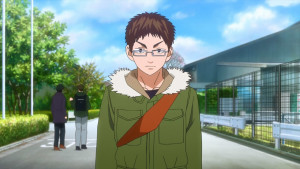 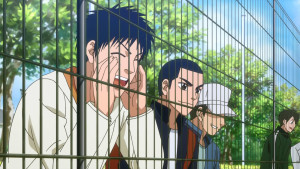 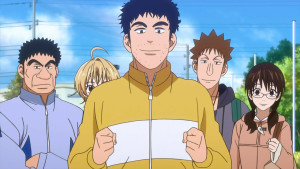 This was just a crazy marathon match. Araya in the end has a lot of advantages that tipped the scales. While Maruo had to really push himself to adapt to a left-handed player, Araya could focus more simply. He did have to react to all the change of pace, but at the same time he could dedicate himself to just forcefully running for everything. He had the better physique that let him do that kind of thing. He knew how important it was to be careful during Maruo’s last burst of energy, but he had the experience to carry on and secure the win. While he’s super hyped a lot of the time, he’s a good guy. He looked out for Ei-chan after the match and even showed him how big his battle was and just how strong the impact left on the crowd was.

This was just a match where Maruo ran out of gas. I appreciated how much time they took to show the fatigue for Maruo. A huge mental and physical drain. Just reaching a point where his instincts were screaming at him to stop and not get himself hurt. Something he couldn’t ignore because his brain was so tired that he had to rely on his instincts to decide the course. He did have a great burst when his instincts could carry the game for a while, but sometimes that’s just how it goes. Ironic to meet Iwasa again since it kind of connects to his match. Instead of a body just giving out it was Maruo’s mind that basically cramped up and couldn’t keep going. He’ll have to continue growing so he doesn’t burn out at the end of long matches. 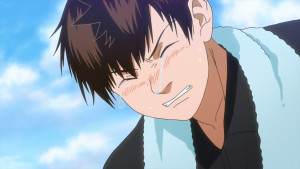 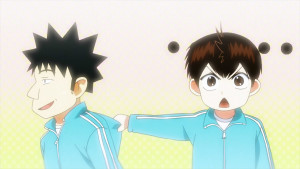 Just a really good episode for this show. I had a fun time following the action and watching the match. Just pulling for Maruo to pull it off, but taking in his loss when it happened. He had more than enough passion and drive, he just couldn’t pull it off at the end. Getting closer to the matches he can’t afford to lose, but at least we know he has it in him to fight against the best in his age range.
Score: A+