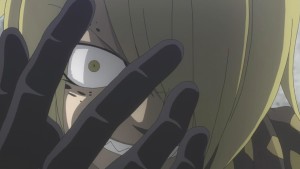 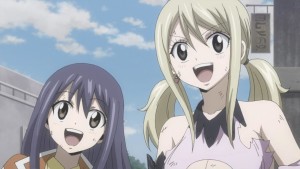 …Aaaand we’re back to those horrid 7 minute recycled segments at the beginning of the episode. It only took three episodes but Fairy Tail is back to old bad habits. And things were going so well too. 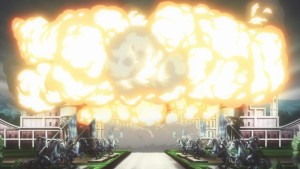 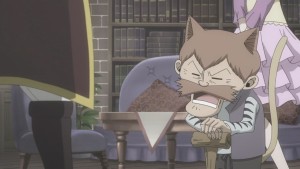 Beyond the rather annoying seven minute recap/reused content in the beginning of the episode, however, things were mostly pretty great though. The first round of Jackal and Natsu’s battle delivered the punches, the action and the surprises and it continued the Tartaros arc excitement through and through.

Natsu rushing in and taking down Jackal at first was in one word, Extraordinary. The whole pummeling that Jackal received was a bit of a surprise at first, honestly. It made a lot more sense when Natsu got burned (quite literally) as a result of his brash decision making. 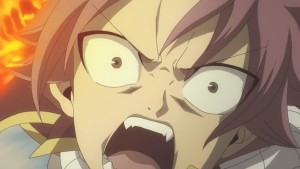 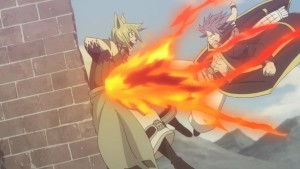 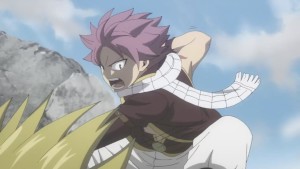 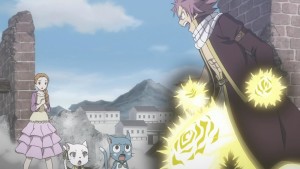 In some ways, despite how epic Natsu is and how capable he is, he seems to throw caution to the wind a bit too often, which at some point, will lead to disastrous results. I’m not sure if we’ll ever get this properly explored in the same fashion as the whole “its okay to be afraid” thing with Gildarts was in the Tenroujima Arc, but well… At least Natsu’s not rewarded for his rash actions.

And with Natsu taking a fall soon after Jackal woke back up, things really got interesting. For one thing, we learned that the Tartaros Demon Gates don’t actually use magic, they use Curses. I really really dig this whole concept, if simply because it not only gives Tartaros the whole “we’ve got something more powerful than Magic” but also gives their whole power a much more sinister twist to it. The whole thing just fits in thematically too, with how each of their powers really are the personification of tragedy, misfortune and fear. 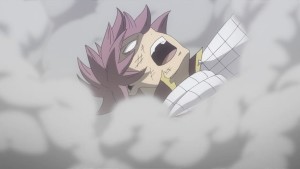 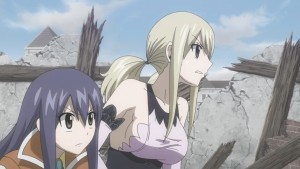 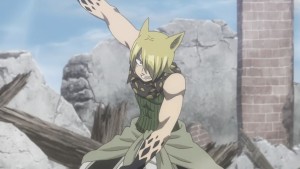 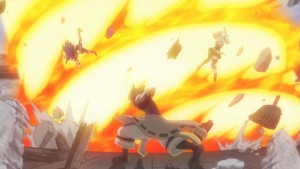 Speaking of fear, this episode was filled with some pretty tense moments. After Natsu fell unconscious from the multiple blasts he suffered as a result of being cursed for simply touching Jackal, Wendy and Lucy tried to hold the fort.

That went about as well as you’d expect, with both them being knocked back, battered and beaten. Of course, what was really great to see was Lucy taking the initiative and fighting like a true Fairy Tail Mage. Gone are the days of the scaredy cat Lucy who seemed out of place beside Natsu, Gray and Erza. She’s a full fledged awesome Mage for the simple act of going ahead and facing Jackal herself. 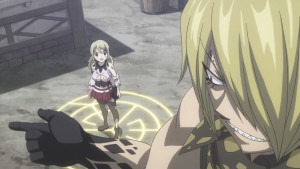 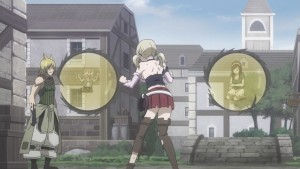 And that whole confrontation? Chilling. Not only did Jackal quickly trap her, but proceeded to mentally torture her too. Having Lucy choose between a Pregnant woman and the snilveing Old man? That was tough. Yes, given how much of a pathetic, selfish ass The Former Council member was being, I would’ve fed him to the wolves (or the Jackal in this cause), but its important that this is the worst kind of decision to give to a kindhearted girl like Lucy.

This is it. This is the kind of stuff that makes villains super imposing, where they cut at the heart of what makes the heroes so good and pure. Its trials like this, that make villains detestable, and also entertaining. Its a lot better than developing a character as detestable because he/she enjoys ripping clothes of public shaming or something of that nature. With these villains, Mashima-sensei has really created something quite elegant and beautiful, in its own twisted way. 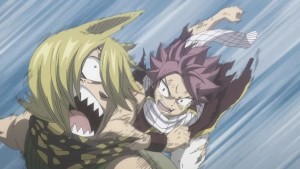 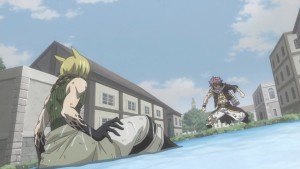 Natsu coming in at the right moment worked surprisingly well, since the tension of the moment was so high that it just felt like a relief. Nobody watching would’ve wanted Lucy to choose, and its kind of nice that the story did give her an out. Some stories, don’t need to really cut into a character to be entertaining, exciting and heartwarming. The fact that this whole choice put Lucy through the wringer, was enough to justify its existence I’d say.

Having said all of that, I really don’t have much more I want to say. This was a solid episode, one that has me a bit worried with those recycled bits coming back into play. I guess its disappointing because there had been an absence of these distractions for the last few weeks, and Fairy Tail really did feel great again. Its just sad to see that these adaption issues are just going to be business as usual going forward. 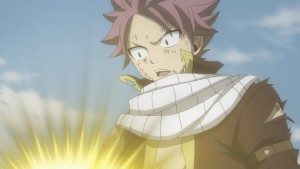 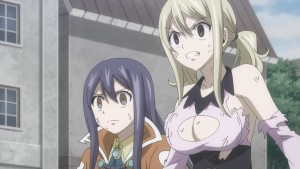 Ah well, I suppose we’ll just have to sit down and bear it. At least whatever does follow these recycled episodes is pretty darn engaging. 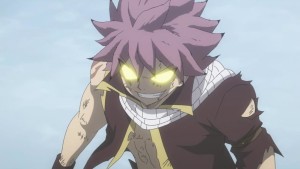 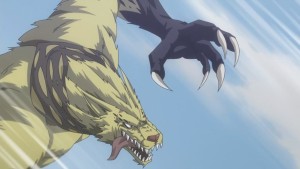