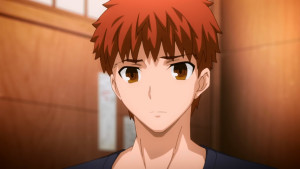 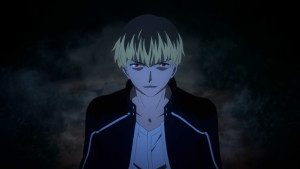 It’s about time to be spending an episode setting up the last fight. Everyone vs Gilgamesh and somehow they’ve got to come out on top. The stakes really don’t get much higher than this. Either win or everyone on the planet will die a horrible death. Have to put that lunatic down or nothing will remain.

And as expected it will somehow come down to Shirou vs Gilgamesh. Even with the mana boost thanks to Rin it’s going to be tough to just be in the same universe. Certainly clear though that the one person who could probably come close to matching him would be Archer. The issue is that Gilgamesh is basically a guy with a machine gun that fires nukes. He has both quality and quantity on his side. The only downside I see is the upper limit for this tracing. Archer himself said he could copy Saber’s sword but the clash would kill everyone and would be harmful to him irregardless. If Gilgamesh has a ton of super powerful weapons then Shirou will be in for it. Maybe he can deflect the standard stuff that he just throws, but ones with special powers will be trickier. 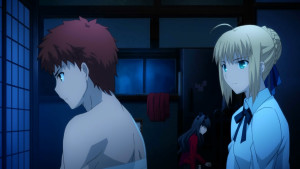 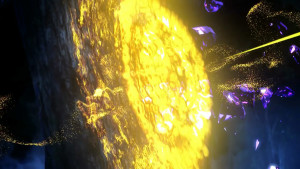 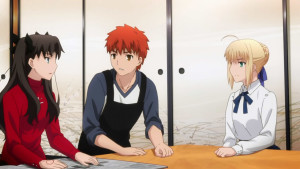 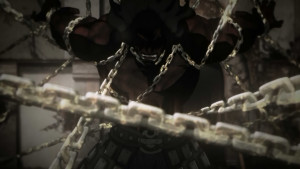 Really there is only so much to say with this one. A lot of it focuses on everyone understanding their situation and planning their action. They need Saber to destroy the grail that is the key point. But they also need to keep Gilgamesh from killing them. Outside of those two points it’s a pretty flexible situation here. At least now a lot of things makes sense. Gilgamesh didn’t want a proper grail so he killed Illya to make a messed up one to kill everyone. The only thing to hope for now is to see that cocky guy with egg on his face. If Shirou of all people can even injure him…oh god that will be the most hilarious moment of our time.

We know where the final battle will take place, at the temple. Of course it will. That pretty well guarantees Assassin will be alive since if the fight was anywhere else you could just ignore him and have him be dead. Not that a fully powered Saber can’t handle him, but it will take a bit of time. 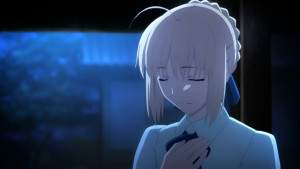 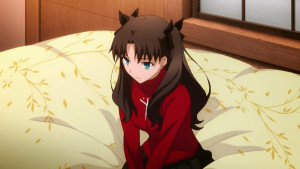 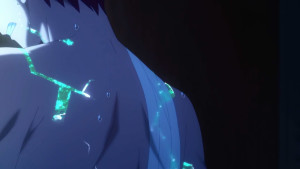 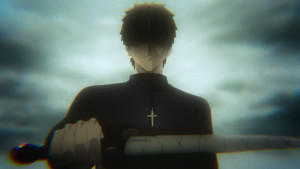 This episode was just a time for quiet reflection for a lot of characters. A chance to confirm their feelings and motivations before what will be the last battle. Saber has had to accept her situation or at least accept the fact that the grail isn’t exactly what she hoped. The cost of trying to use that kind of thing is too high. Will just have to focus on the battle ahead.

And naturally a major focus on this was Rin and Shirou. Strangely enough it kind of sets up a past between these two. Back when Shirou was working his rear off on trying to do a high jump and Rin was watching from the distance. To be honest….I’m kind of with Shirou on the confusion. I mean sure that’s when she first met him and noticed him. But does that matter? It was high jump. Sure it shows that he has stubbornness and determination, but are we supposed to presume she fell for him at that moment or something? Goes to show the most embarrassing secret that Rin has….is something pretty innocent. 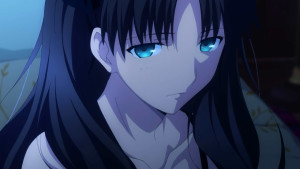 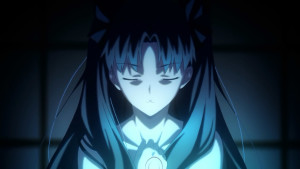 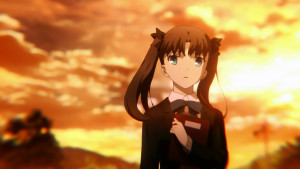 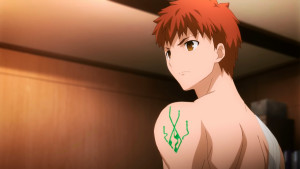 At least they have tried to cover how the heck Shirou is going to do this. If he can gather enough mana to create unlimited blade works himself….then maybe he can stand a chance. At the very least in that place he’ll have a nearly infinite supply of weaponry to work with. If he can steal and counter with the weapons Gilgamesh uses against him he should at least be able to buy time for Saber to destroy the grail.

The scene itself was pretty awesome visually. Rin passing along her magical crest in order to give Shirou the strength she needs. The cost of that is just high no matter how much you understand this universe. She’s putting it all on the line here. And it was just cool to see the impact that her passing that had on Shirou. Seeing a lot of scenes of her past and just experiencing something spectacular. Plus it was pretty awesome seeing Rin so utterly embarrassed. Rin is a lovely character and this episode had a ton of moments when they just reminded you of that. Obviously this was a pretty personal moment and her reactions showed that. Shirou is a bit less understanding on the depth of some of this stuff so it didn’t hit him in quite the same manner. 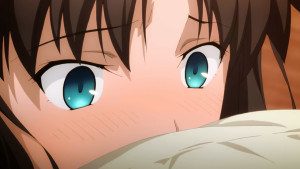 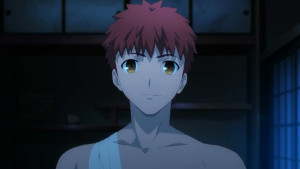 Now the stage is set. Maybe some of next episode will set up the battle and get them over there. But I have some hope we’ll get some action. Either way this was a good episode in terms of giving us a chance to catch our breaths and for some time spent with Rin and Shirou. Though it was mostly just giving us a reason for Shirou to even be able to pick a fight with Gilgamesh without dying instantly. Looking forward to next week.
Score: A-