This series certainly has a knack of leaving me with a mix of complicated feelings at times, especially because at times it seems skilled and able to handle it’s material with a deft touch and at other times it is downright clumsy, crude and even … well, juvenile … with its content. Why it chooses the latter still seems to me to be a half hearted attempt to somehow garner some level of attention from certain potential dvd/bd disc buyers … or something. Series like this are frustrating in the wake of such series handled with consistently talented and caring hands that are … well … fearless, I suppose? This season series like that for me are Ore Monogatari and Kekkai Sensen – consistently just plain good and solid and always coming across as if there is a clear image of what they want to do. 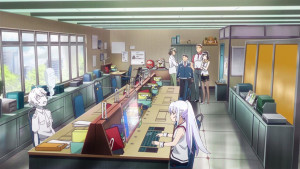 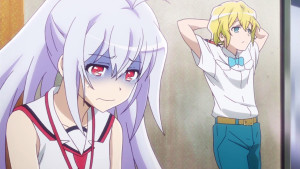 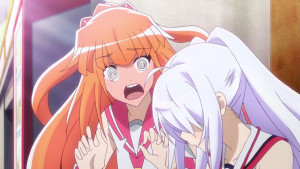 After last week’s “cliffhanger” it should not be surprising that this week’s episode starts off with Tsukasa in a state of total shock and not quite knowing what to do with reality in general. In other ways Isla is in the same boat, of course, but she has a much better poker face in public, and can carry on as usual externally. Internally, though, she is just as stressed out and confused over what happened and what to do with the sensory data she experienced – classic case of no application in existence that is associated with a filename with that ending. Last week also ended with both Andie and Eru both seeing Isla reject Tsukasa (and express their disbelief and bafflement over the fact). This practically means that the entire office of Section One Retrieval knows what happens immediately and are unsure what to do about it. The episode is primarily dedicated to various other members of Section One beginning to process what has happened. 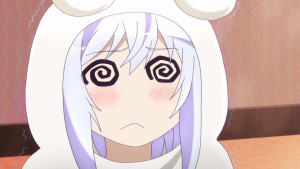 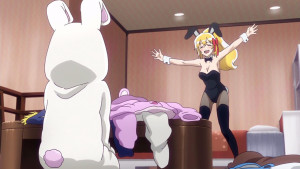 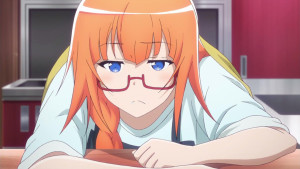 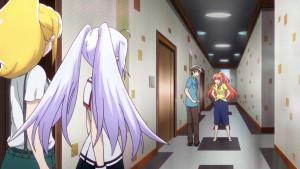 This episode was dedicated to Michiru grappling with the issue. And I must say that this was yet another example of Michiru’s downright nasty streak in here when it comes to Tsukasa. I really wish someone would just slap her silly (maybe Zack would do it?) and really confront her about just how downright mean-spirited and hurtful she has been to Tsukasa. She can be so kind and helpful and large hearted when it comes to Isla, and she really does go out of her way to help her in particular in this episode … it even extends (eventually, almost as an afterthought, and perhaps because Isla is involved, though that may admittedly be too cynical a take on my part) to Tsukasa. At least initially. Eventually she begins to see that despite all that Isla thinks or expresses or says she (Isla) really does … well … have the beginnings of love for Tsukasa outright. 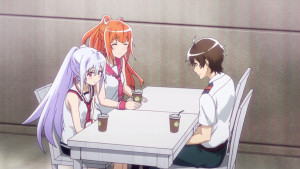 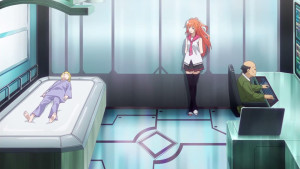 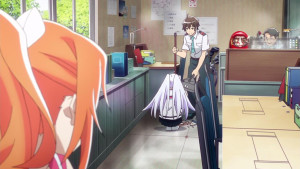 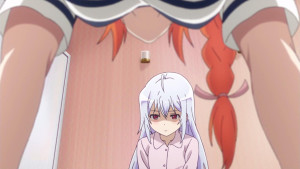 So far so good … at least in the sense of events and the like were going as I expected and all the characters were behaving “normally”. But then something happened that I did not expect – Isla left fall that she only had one month of her lifespan left, and … it devastated Michiru. (In some ways one thinks that being slapped by Zack would have been far less painful.) Not only does this serve as an occasion to show how arrogant and insensitive Michiru’s actions have been up to now in this particular case, but it even makes her confront a side of herself that she does not like. In the past she refused to face the oncoming “end of life expectancy” time of her Giftia father in a good or even somewhat normal way and as a result not only were other people hurt, but she herself was scarred in a much deeper way than if she had simply attempted to face the reality of the situation a little more straightforwardly than she was able to at the time – a common enough failing in so many of us! But here, here Tsukasa faces up to her and in a sense “stares her down” and unintentionally “shows her up” – shows that he is facing the situation much more directly than she did. And the result is perhaps a little respect gained and a full supporting of the two of them. 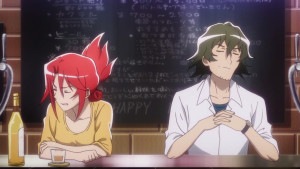 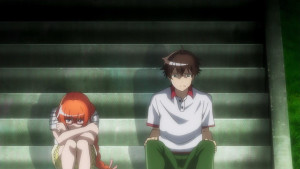 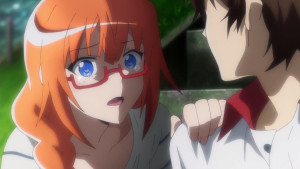 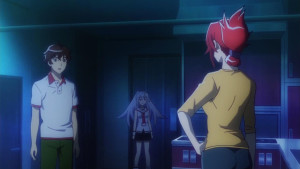 Shortly after this we have another character show up (ominous foreshadowings of her interfering were sprinkled through the ep) who also is having a difficult time accepting the possible situation between Tsukasa and Isla – and this time it is Kazuki. She has decided that separating the two of them is the best thing – essentially deciding for them based on what she chose to do when she separated her partnership with Isla. I think the pattern set in this episode with Michiru being the first hurdle and Kazuki being the next one incoming may continue on into other areas or even characters in the series as well … and in the process not only will Isla come to terms with having a give and take of love with a human even though she knows her days are numbered but also Tsukasa himself will mature and deepen in his love for Isla as well. Even so … part of me still wonders if a tragic end is heading in our direction? Whether Isla will shift into a wanderer state? Or before that happens if she is shot by the gun used to take down Marcia in episode 5 by someone who is not persuaded and decides to take matters into their own hands … possibly after getting everyone else in Section One Retrieval on the same page regarding Isla as well….

Before I forget, special thanks once again to Passerby from random c dot net for the screenshots … daily life has been extra demanding of late, and has made keeping to some kind of normal schedule quite a challenge! Thanks so much for your work!