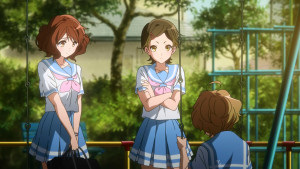 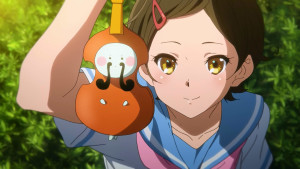 Another good episode for this show. I don’t think it was as emotionally impactful as last week, but this was still really good. They jumped into the auditions and spent a lot of time building up to it. Despite the fact that the OP gave away who was going to make it and who wasn’t, there was still a lot of tension. Seeing characters worry about their fate and seeing people working as hard as they could because they didn’t want to fail.

There was of course a lot of emotional aftermath with this episode. The issue of Kumiko’s feelings are still really….I don’t know. I think there is still a big issue in that Kumiko hasn’t really tackled her own feelings yet. The thing with Shuuichi was so out of left field that she’s still trying to figure out how she even feels about it. Hazuki may feel like there is pointless denials and Kumiko actually does have those feelings, but who knows. To be fair to Hazuki…if she was that good at reading people she never would have gone after Shuuichi in the first place. I think anything is possible when it comes to the futures of these characters. The childhood friend is just the safer bet than a seriously handled same-sex relationship. In the end I’m glad we got enough from both sides that if no one ever looked into the source material, they could enjoy both possibilities. 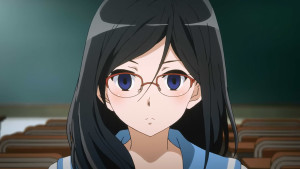 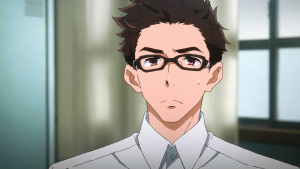 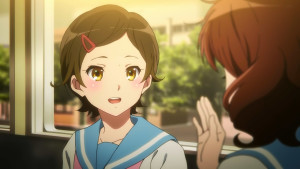 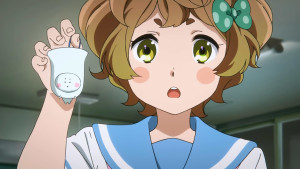 But wow Asuka…can’t say I ever expected that from her. She may be the weirdest existence in the band to be honest. She may truly love band music more than anyone else there and unless the situation involves that….she can’t stay interested. Especially if it’s getting in the way of practice. I’m surprised in some ways she stayed out of the previous conflict. You could say she didn’t pick a side because she didn’t care, because it got in the way of her performing. But it’s clear now why she didn’t take the president job, it’d get in her way and it’d bring too many emotional complications.

Hazuki is an interesting person in all this. I do feel for her in a lot of ways. She lost out on the guy she liked and she even had to struggle to cheer up Midori. But dang, she really is a good person. She was far more excited for Shuuichi making the trombones than she was upset about her not making it with the tubas. I really do wish things could have worked with those two. Hazuki deserves some happiness. I’m not sure what Shuuichi deserves because…I still don’t have a strong opinion about him. The guy is very background at times. 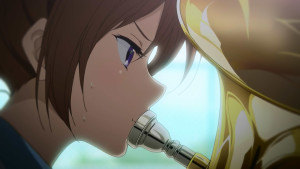 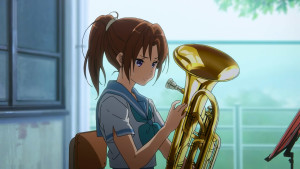 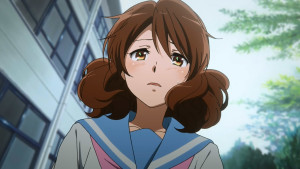 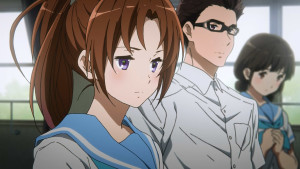 I have to say though I really felt for Natsuki. She started out as just this sleepy girl you didn’t think about, but she really has grown on me as the show has gone on. She started to get more active once things began to change and this episode just gave you a picture of reality. They just developed Natsuki nicely to this point and I’m kind of curious to see how her relationship with Kumiko changes now. Natsuki may give the best chance to re-enact in a way that flashback Kumiko has had teased to us. If it’s related to this situation it could be another case of Kumiko ‘showing up’ one of her senpai and that person getting pissed at her, maybe even being upset at her diligent practicing. In the end though I just feel bad for Natsuki. You could see how hard she was working at the end there and still fell short.

This was an interesting episode for Kumiko and it ties into the Natsuki scene. That really shook Kumiko up. I think she understood mentally the importance of the auditions and how people were going to be working. But it was seeing it that was different. Seeing how utterly focused and heard Natsuki was pushing herself, scared Kumiko. And again it ties to her past. Kumiko was scared to seriously compete against her seniors. Not so much Asuka, but Natsuki. When Natsuki wasn’t dedicated it wouldn’t have been really competing with her, but with Natsuki driving herself to do well…it was. And she only really realized how much everyone wanted to be in the competition that late. On a level I’m sure she felt scared that she was under-prepared, that she hadn’t gone all out and now….time was about up. 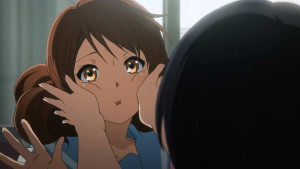 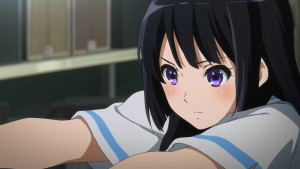 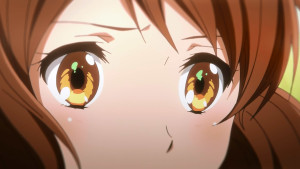 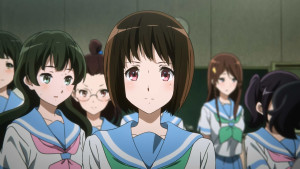 Regardless how you look at it, Reina showing up when Kumiko needed someone to be there for her was good timing. Kumiko was really shaken. It was a funny moment with Reina just walking up and putting her hands on Kumiko’s cheeks. Just simply saying that she was going to give her all and that Kumiko needed to promise her that she’d do the same. And really that helped Kumiko later when she was afraid of not being ready enough for a certain part. Can get that feeling that Reina does believe in Kumiko’s ability and also she wants to see her friend in the competition with her.

That audition was stress…I mean damn. Even though I knew Kumiko would made it you could feel the pressure. Kumiko worried the bar was set high because she admitted to being pretty experienced with the euphonium. It was interesting just to listen to her audition since again it’s a sound I’m familiar with. Plus…while in my case it was more music class performance exams, that kind of judgment for a solo performance is pretty stressful. You have one shot, and you have to get it right. It’s a great test of course since a competition is stressful as well.

The result, now that will be fun to watch. You could see Kaori being a bit worried going into this audition, probably because of Reina. If she wasn’t there then getting the solo part would have been easy, no one would have fought her for it. And this is her last year so you could feel the worry that she’d lose it and never have that chance again. Of course she’s a bit hurt realizing that she lost, but that’s only human. Still on the band, just didn’t get the solo. But the ribbon girl? I can see drama coming there since she is a Kaori fangirl. She has to be pissed off beyond belief. But, this is what Reina wanted. She wanted that solo and she wants to be special. Not much of a place with so much pressure and attention as the trumpet solo. Good luck to her. Hopefully if she has issues with the group, Kumiko can back her up. 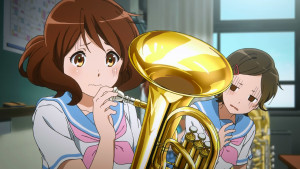 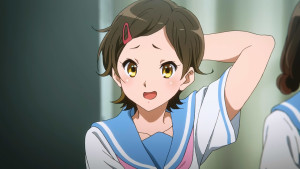 Another strong episode. It had its own great moments and the stress of the audition could be felt throughout. There was also a lot of nice little moments that fleshed people out more like with Kaori talking to Haruka. Even Midori had some moments of weakness and guilt over pushing Hazuki. There isn’t much time left, but here’s hoping we can build up to their first test and see how things unfold. There is a lot I expect we’ll never see animated, but I’m going to enjoy this show until the end.
Score: A