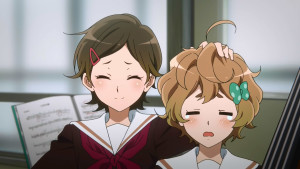 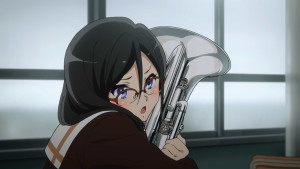 Now this was one fun episode. They used the big festival as a focus on the relationship side of things for the characters and also to push forward friendships. For weeks one thing I’ve been wanting to see more of is Reina and Kumiko and this episode gave us that in spades. The fun part of it is that you can have fun with the yuri-goggles, but also just treat it as a great movement forward as friends. These two who weren’t all that close in middle school have really ignited their friendship now thanks to this. Sometimes there are lucky accidents in this world and that ‘invitation’ from Kumiko to Reina was one of them.

I will give full condolences to Hazuki. She took it really well, but it still hurt to get shot down. At that point I was really hoping for the best thought not expecting it. This kind of thing can only go so far when it’s not a two-way street in terms of feelings. I wouldn’t have minded if he put his feelings for Kumiko aside and saw how things progressed with Hazuki, but I can respect his feelings. Hard to be serious about someone when you do have those unresolved feelings. I’m not sure how things are going to turn out with Shuichi and Kumiko, but at the very least it has to get resolved one way or the other before either of them can actually get involved with someone else. 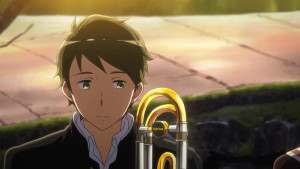 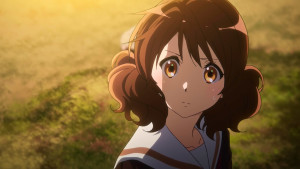 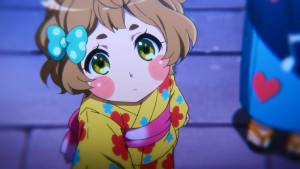 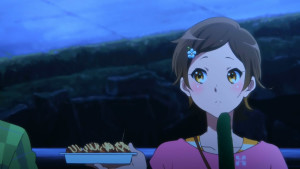 This was the episode that brought back the Kumiko and Shuichi stuff into the forefront. You could certainly say “wow” when he actually made his move and asked her to the festival. No one, not even Kumiko could miss the implications of that invitation. The whole dance of denial and uncertainty with these two is interesting and feels kind of realistic for childhood friends. While he can’t openly admit that to others, clearly he’s interested in pushing things out of the standard. He’s been making a lot of pushes to interact with Kumiko leading up to this. At the same time I’m not sure where Kumiko stands. I think she does have some feelings for him. But whether that overrides her desire for the status quo and not to move past friends I’m not sure. She didn’t seem that bothered by Hazuki wanting to ask Shuichi out, just surprised. I think they could end up together, but I wouldn’t be surprised if she wasn’t willing to cross that line. I still think that she inherently drew the line when he insulted her in middle school, even if it clearly was out of embarrassment. Plus I did like how she got bothered when he came to talk to her during band. He interpreted signals that really didn’t exist, she left the room because she was uncomfortable. Kumiko didn’t leave the room to send any signals for him to approach her. Also, total props for Kumiko for actually drawing out the love triangle as she saw it XD.

Again, I just felt for Hazuki. I was really impressed by her this week. She was natural in being uneasy about actually admitting to Midori and Kumiko how she felt and also in asking him out. But, when it came down to it she gave her all. Hazuki dressed up for the occasion, she was pretty confident and she came out and bluntly confessed. It didn’t turn out well, but she didn’t beat around the bush. Frankly Shuichi could use some of that strength and courage. She did have a bit of a cry after with Midori, but she was able to bounce back pretty effectively. So yeah, props to Hazuki.

Also….wow the Midori cloning factory. It was a joke previously with Hazuki’s imagination of an army of Midori’s taking her spot on the band….but who knows. Her little sister looked effectively like a clone. Kind of amazing. 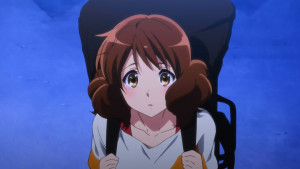 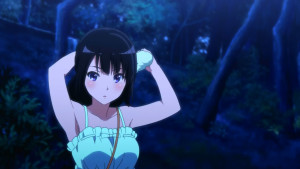 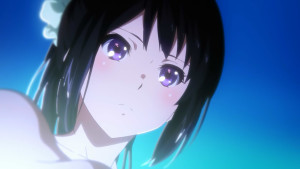 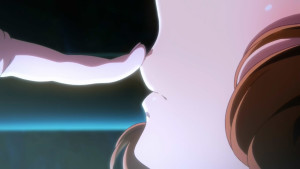 I will say upfront that I have no idea if Reina has any actual romantic feelings for Kumiko, but this is the rare time I can actually say it’s not just a desire to hook up characters. There really was enough there to be able to say maybe she does. I mean she dressed up for the date, she has been looking at Kumiko a lot, all the blushing, their pretty deep discussion during the ‘date’ and then the whole running her finger along Kumiko’s forehead down to her lips….there is a lot to work with there. I don’t care who we are talking about, that kind of scene was pretty romantic and somewhat sexy. If they do nothing with this, I think it was still an impressive scene just with the whole telling Kumiko to call her Reina. Honestly if it followed with a legit romantic confession…I wouldn’t have been surprised. Well not extremely surprised anyways. I can’t see them going this route, but if they do I feel like this might be one of the more takes on this kind of relationship that I’ve seen in a while.

Just the whole date with them from start to finish was great. It was hilarious how Kumiko just grabbed the first person who came out the door and it was Reina. The timing was just perfect as well as was Kumiko’s terrible way to avoid turning down Shuichi. That could have been another guy for all she knew. I love how Reina was pretty surprised, but stood still and when the day was over just asked when and where Kumiko wanted to meet up XD. She had no issues actually doing it. 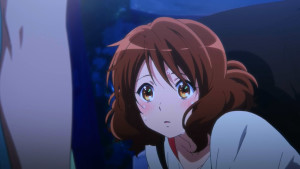 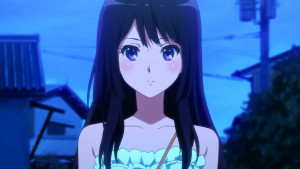 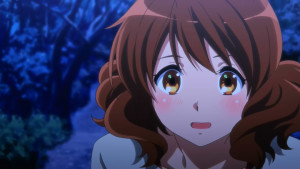 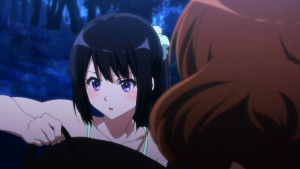 While it’s possible to misread things….Reina was dressed to kill. It should be illegal for her to look that good in that dress. I can’t really blame Kumiko for feeling some attraction there. Was funny to have her now relate to those who are lead away by Snow Woman (or really anything like that) and end up dying. There are just some things you can’t resist even when it’s dangerous. You could actually see Kumiko when they met up look down and sense that she felt under-dressed for this. Could also say that Reina felt that as well.

Regardless I enjoyed their discussion along the way. Discussing Kumiko’s kind of twisted personality as they went. I liked how Reina was reasonable about sharing the load. She asked Kumiko to bring her euphonium and so she helped carry it. A trumpet and a euphonium have pretty different weights to it is only fair to not force Kumiko to drag that thing around. Reina is just an interesting character. Actually walking around in those shoes and taking the pain that came with them. The show just feels a lot more real and solid sometimes with recognizing little things like sores at the back of her feet. Plus the dialogue with these two was just great. Little things like “I don’t dislike pain” “what? that’s kind of erotic” and “pervert.” It had me laughing a bit and just enjoying the moment. I do think it’s interesting how she was drawn to Kumiko because of that personality and the disparity between the nice appearance Kumiko keeps and those blunt phrases she can let out before realizing it. 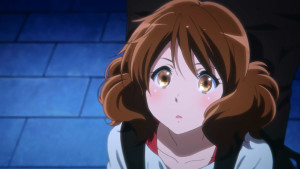 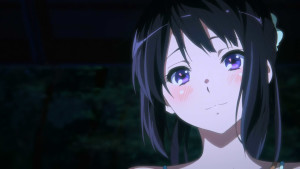 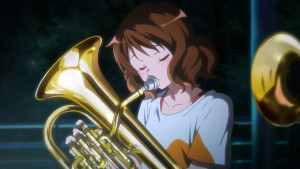 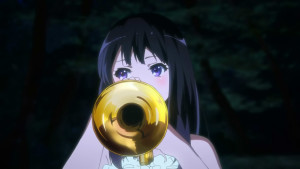 The scene overlooking the festival was quite nice and I could understand why Kumiko was a bit in awe. Plus it lead to a good insight into Reina and the type of person she is. Doesn’t just reach out and talk to anyone because it’s comfortable. She’s just more picky about her friends than that. Plus it really does make sense that if she wanted to be special and stand out that she picked the trumpet. It really is the instrument for that. It gets a lot of solos and is easily recognizable both in sound and appearance. That is the instrument for people with that kind of mindset and I think it’s kind of awesome how blunt she is about wanting to reach for that level. Plus then breaking out into a pretty adorable laughter and leading into them playing together.

That little performance at the end of the episode was perfect. Just the sound of a trumpet and euphonium with the images of the festival and aftermath of the episode. Even just holding on that image of the flickering lights of the city below them. No dialogue, but you could see what was going on. I just liked the simple eye communication and contact between Kumiko and Reina as they played and took in the moment. 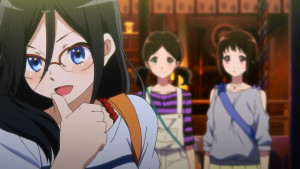 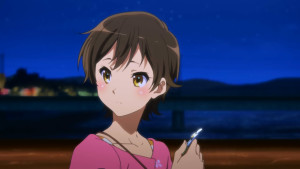 In the end I really enjoyed this episode. There was a lot of little things to appreciate and it helped deepen the understanding of the cast. You have the two tuba players who were revealed to actually be dating. I loved the guy going “wait we’re not dating?” in kind of shock before she responded that they were, but she wanted to keep it a secret XD. You also had Natsuki and the trumpet girl having those taunts, but in the end they went to the festival in a group together. So it really is a kind of rough friendship going on there, or they just have the same friend and simply put up with each other. I’m curious to see how Hazuki will get involved with Kumiko and Shuichi, how Reina and Kumiko’s relationship will continue to develop, and of course how the auditions are going to turn out. This episode focused a lot on the connections between characters, both romantic and not. A good thing to do when I’m sure the auditions will lead to more drama.
Score: A+