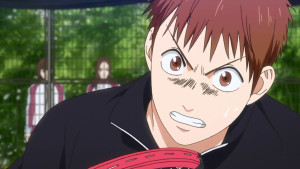 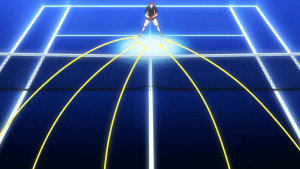 So, that was a pretty intense game for both sides by the end. Just Miyagawa playing for his life against Ei-chan and our main character having to rise to the occasion. It was a good match to begin with, but at a certain point when Miyagawa started to feel cornered….it was something else entirely. If Miyagawa hadn’t lost heart and not given away one game without a fight who knows how it might have turned out. Miyagawa was playing like a beast and forcing Maruo to give everything he had in order to keep going. This was a match they had to work in order to create the tension for since obviously Ei-chan couldn’t lose. This was must-win. But they still did a great job keeping the intensity up.

This was the benchmark for Maruo’s growth. This was the point where you could just see how far he’s come as a player. Miyagawa has improved in respects, but in some points he hasn’t really changed all that much. While on the other side, Ei-chan has changed and evolved in almost every respect. Miyagawa was simply outclassed. That’s just insane to think after looking back at their previous match (and seeing how much weaker the animation quality was than this second season). It was over just at the point that Miyagawa realized “this guy is better than me” seeing Maruo improve and surpass him had to be devastating. He had a fluke loss to him before and now that guy is better than him. Finding his footing and ability to fight back against someone who actually has him beat just on a physical and technical level was hard. 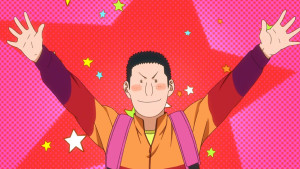 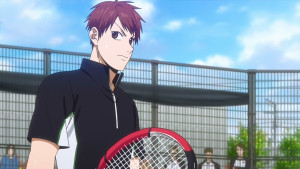 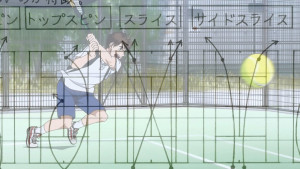 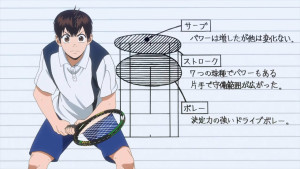 Since this is a match game there isn’t that much to say other than they did a great job with it. This moment was pretty amazing to me since you could just see how far Ei-chan has come. He beat Miyagawa last time and he could use a lot of the tools he already had from that match. He controlled the game at a pretty high level. He could predict Miyagawa’s serves like before, and because of his note taking nature, he was able to take down Miyagawa’s prided drive volley almost immediately. His game is all about finding the weaknesses of the other guy and controlling the game. He did that to perfection here. Miyagawa was being cornered by the precision and really struggled against Maruo’s improved serve. Just outclassed in this one.

Now it’s not like Miyagawa didn’t have any good moments. But the score was pretty devastating at the end of the day. His strokes were still pretty hard to deal with and once he went into crazy desperate mode he was just getting everything in. When high risk shots are always going in…that’s hard to handle. But again, the fact that Ei-chan could keep up with him despite that shows how far ahead he was as a player. Miyagawa playing at 120% could not beat Maruo being pushed to around 100%. That was the difference between them on this one. 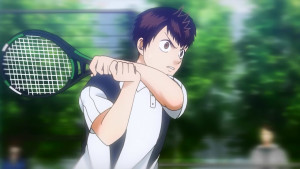 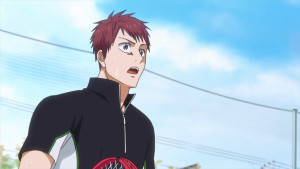 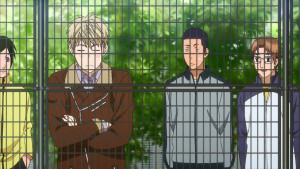 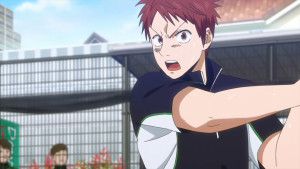 You did have to feel for Miyagawa a little bit in this one. The pure shock and desperation was clear as day on his face. Seeing his dreams die in front of him was tough. But that’s the kind of world that Maruo is walking into. He’s going into matches where everyone is just that desperate. Where winning and losing mean the world to a person and they can’t afford to lose. But someone has to lose. Miyagawa just suffered on the mental side of the game and that cost him. The shock and pressure of Maruo keeping up with him when playing his strongest stroke game, the fear of his tennis career dying if he loses the match, etc. Just all those things dragged him down. Even at the point where he was playing his best, the guy looked like he was in a fight to the death. Just pure focus and pure emotion.

Major props to Oobayashi again for helping Miyagawa find himself. He didn’t just play like a zombie to the end of the match because he had that kick to the rear. Even though he couldn’t win, he played with everything he had and that was thanks to the reminder he got from Oobayashi. He has a long life ahead of him and he wouldn’t want to remember that he went out without giving everything he had in the process. If nothing else he can remember how hard he tried. 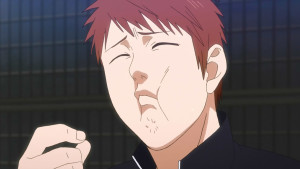 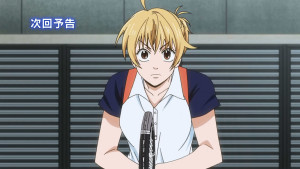 There really wasn’t any addition or changes of note. This match was just so good I think it didn’t need changes. They could just focus on the match and give everything they had to it. The only thing of note might be that the show seems a lot stronger as a whole in comparison to the first season. This match had the right pacing, the visuals were solid, and the music fit nicely for it. This was one of the more intense matches for Maruo even if it was not all that long. The preview makes for a very interesting episode next week. Indeed…the much awaited battle of Maruo and Natsu XD.
Score: A