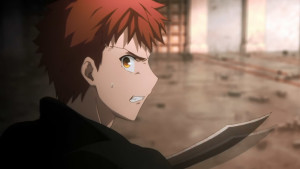 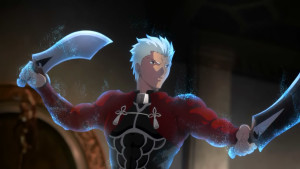 Now this was the kind of episode I was hoping for when UBW got a full blown adaptation. A lot of focus both on the action and the characters. The fight between Shirou and Archer had a lot of action, but it also developed and explained Shirou’s character. You get a much greater understanding of the guy after this episode. It’s pretty interesting to see how he got to this point and the kind of base his ideal was created on. Really this was the kind of episode I felt the need to watch a few times just to wrap my head around what was going on and how Shirou ended up as the person he is.

They did a good job breaking up the focus with Rin and Lancer not constantly being mixed through the episode. It was appreciated making sure to wrap up that side of these events in just the first half and leaving the rest to Shirou and Archer. It would have been a shame to be jumping between too many events. Plus the fight with Shirou and Archer was well worth watching on its own merits. They didn’t need to spice it up by showing other events past a certain point. 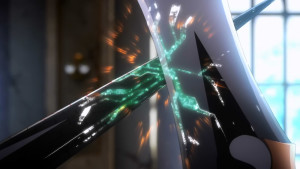 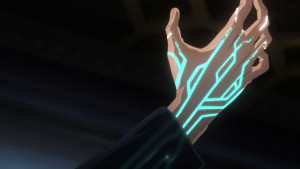 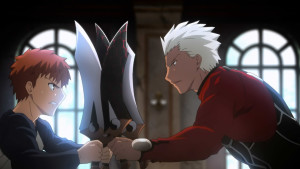 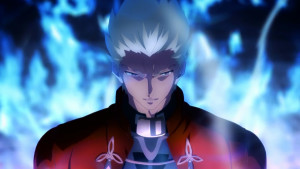 What can you say about this fight besides “this was awesome”? Really, it was a great showdown between the two versions of Shirou. It just built up nicely. A Shirou who is fighting with everything he has against Archer who is really on his last legs and isn’t nearly as strong as he’d be normally. Not that he’s going to vanish mid-fight, but it’s just enough to even out the playing field a little. And even that wouldn’t be enough normally to make up the difference. The idea that Shirou is gaining improved skills the longer they fight is perfect. Every single clash gives Shirou more information and rapidly is evolving his swordsmanship and his magic. Shirou is certainly right when he talks about them both being copycats.

Not that Shirou’s method of bridging the gap between him and Archer was perfect. While he gained a lot of combat abilities through those clashes…he also got more of those memories. It’s one thing to hear Archer talking about his past and actually seeing it. The tragedy of Archer’s life, his fights, and even….getting hung. That’s some ugly stuff. Shirou having to tell himself over and over again that he doesn’t feel sorry for Archer. It’s no wonder that Shirou’s spirit and will to fight was being chipped away at throughout the whole episode. It’s a war on an emotional front that Shirou wasn’t so easily prepared to face. Being faced with the fact that Archer is technically correct in what he’s saying. 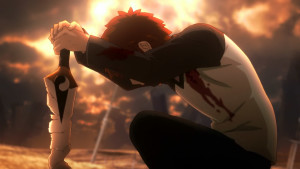 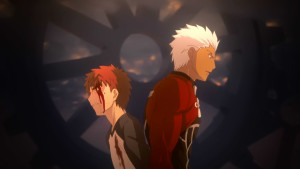 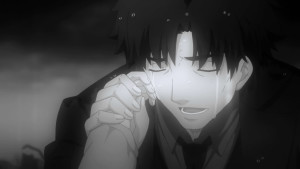 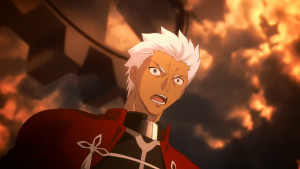 The great thing is while the action was good, it was the emotional side of it that made it great. Just going into depth about how Shirou got on this road and the realities of his dream. It’s just crazy to imagine how Shirou got here. Being saved by Kiritsugu and then the only thing he had left after Kiritsugu died was fulfilling his dream. Fulfilling the dream that Kiritsugu originally had. The key to this though may be that while Archer is Shirou, his memories of his original life aren’t entirely clean and clear. It’s overwhelmingly taken over by his existence as a heroic spirit.

But still, it really hit Shirou hard to face what Archer was saying. The dream of being a hero wasn’t originally his own but rather Kiritsugu’s dream. Shirou’s ideals were second-hand, inherited from Kiritsugu. That his magic like his life was just being a copycat. You can understand just why Archer was so angry and fighting so intensely. The ideals of a person who took on second-hand ideals, who took on that goal because it was a beautiful goal and knowing how it would turn out. Instead of saving people he just became a piece of the machine that would coldly and cruelly dish out death. 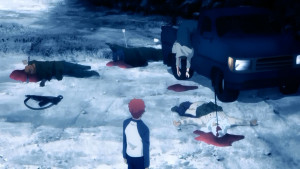 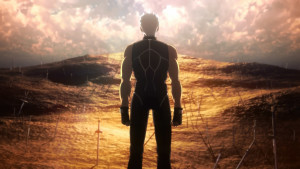 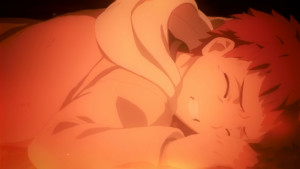 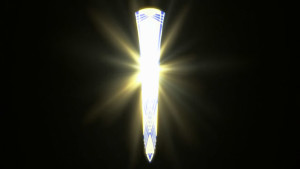 A lot of what Shirou saw on the verge of death was unusual, but did help him find himself. The idea that Archer didn’t lose things, but he ended up like that because he didn’t want to lose anything. Him telling his younger self that he was walking into hell and an older version of himself telling Shirou the same thing. In the end maybe Shirou was right. That while it started with admiration, it was built on a wish. His own wish for such a disaster not to happen again and his desire to fulfill the unfulfilled dream of Kiritsugu. It’s still possible for Shirou to move forward and he’ll keep on going despite what it may take of him.

I’ll give the episode credit, the perfect moment there to use the vocal piece they had in this episode. The turning point for Shirou and the chance he has to win. The scabbard of Saber’s sword giving him the recovery ability to survive those injuries and continue fighting. Having that level of recovery could in itself be the tipping point in a battle of endurance between himself and Archer. Plus I like how the episode started off with Archer talking about how Shirou can’t defeat the embodiment of his own ideals and ending with Shirou refusing to be beaten by himself. 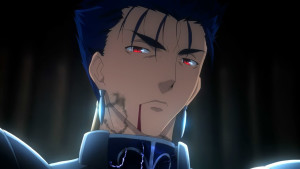 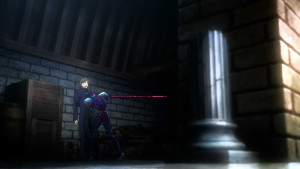 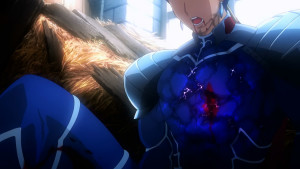 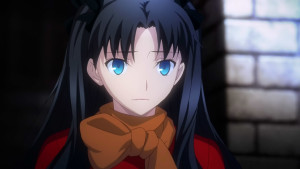 The other focus on Lancer and Rin was really quite good. Full points to Lancer in this episode, that guy is awesome. Even after being stabbed through the heart with his own weapon he just powered through and saved Rin. The guy followed his own beliefs and came through when Rin needed some help. Some people couldn’t be saved in this show, but Rin wasn’t one of them. Kirei may be a badass in his own right, but when you piss off someone like Lancer you aren’t getting off easy. It was just purely fun to see Lancer get himself up and take down Kirei before he had time to react. Even a half-dead heroic spirit can handle that job. Just standing up with a look of “you have seriously screwed up” and just stabbing Kirei into the wall.

Lancer proved how much of a heroic spirit he was. Just refused to die without accomplishing his goal. He saved Rin, knocked Shinji around and gave her a route to escape. Only then and taking care to roast Kirei’s body did he finally leave the field. I know he killed Shirou in the first episode (just not permanently) but he really was an awesome guy. Fought, was betrayed, but stayed true to himself. He really might have made a great team with Rin if he’d had that kind of luck. Sadly that’s just the fate of Lancer though, great fighter, terrible luck. I just thought he and Rin had a good moment before he passed on.

And Shinji…..wow pathetic doesn’t even begin to describe him. Given chance after chance to get out of this and he stupidly continues. He never even comprehends that he is a pawn. Kirei and Gilgamesh have clearly been humoring this idiot and nothing more. But he suddenly think he’s something special. Frankly I think Lancer should have just killed the idiot and done the world a favor. After all the crap he pulled with Rin that’s the least he deserved. 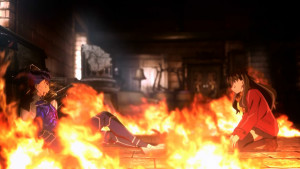 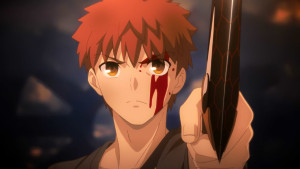 In the end it’s hard to call this episode anything but outstanding. They did a great job with the focus on the two scenes here. The focus on Lancer and Rin was well done and I enjoyed watching the guy stand up and save the day. While I also really enjoyed seeing Archer and Shirou struggle against each other. Shirou having to face a lot of tough truths and find a way to continue fighting. To accept that while Archer is saying is correct it doesn’t mean he’s right. Living with hypocrisy, but also chasing his dreams. The scales are still tilted against Shirou just based on Archer having the better skills and his reality marble, but you can’t bet against Shirou’s determination. Can’t wait for next week.
Score: A+