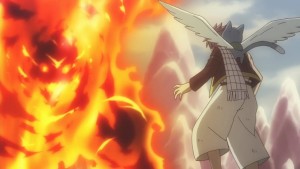 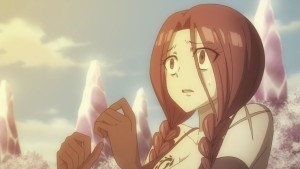 That was a tantalizing way to end the arc, although I think the Recap was particularly strong with this one.  I know I sang some serious praises for last week’s big battle, but I didn’t need to see most of it again right before the OP. Despite all that, I will say that this episode was definitely a good one.

At least the recap only proceeded till the OP, and there was nothing but new content shortly afterwards. I think this is just a case of an adaption falling victim to a rather impossible to meet schedule. Like last week, however, there was just so much good stuff in this episode that I was not only entertained but excited for the future. 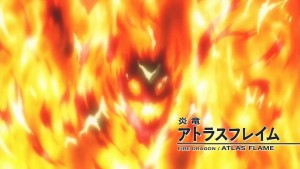 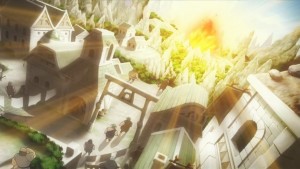 The big thing this episode was definitely the melting of the ice surrounding the Sun Village, and the reveal that the Guardian Diety was none other than Atlas Flame (One of the Dragon’s that came out of the Eclipse Gate). If you were lucky enough to not watch the Preview from last week, then this would’ve come as quite a bit of a surprise. Even if you were spoiled like me though, there was still a lot of interesting stuff to happen.

We finally got some hints as to what happened to the Dragons and what Natsu’s Daddy Dragon Igneel did in the world. It seems that Igneel’s disappearance is largely tied to Zeref, and might have something to do with why he and the rest of the Dragons refuse to interfere with human matters these days. Interestingly, It’s in Atlus Flame’s jumbled up memories that we learn that Igneel actually failed to defeat one of Zeref’s Demons “END” (Pronouned E, N, D not end XD). 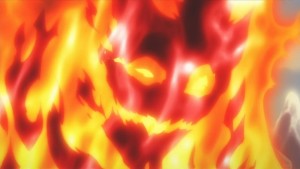 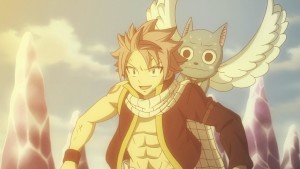 This also gives us some clues into why Zeref expected Natsu to be the one to kill him, as Igneel probably made a huge impression on him. I quite liked how much this story tied in to the deeper mysteries surrounding Fairy Tail and our main cast.

Atlus Flame revealed one more thing before he extinguished the last of his soul to save the village, and that was the identity (of sorts) of the one who put the entire village on Ice. Later in the episode its revealed to be none other than Silver, A Devil Slayer, and one of the Nine Demon Gates of Tartaros. I can see where the next arc is driving at now, and its pretty obvious that Fairy Tail is going to tussle with The Nine Demon Gates of Tartaros soon. 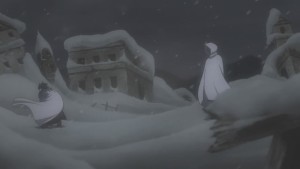 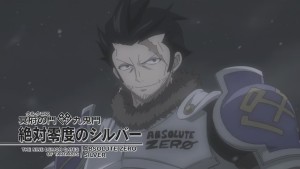 From what little we learned of Silver, it seems that he doesn’t exactly check to see if the things he’s killing are indeed demons, nor does he seem to care about collateral damage. His Magic’s also pretty powerful, and is pretty much what gave Gray the upper hand against Doriate. This little revelation seems to hint that Gray was pretty lucky in how he was able to take down Doriate, but hey, it was still quick and solid thinking at the time.

What does this say about Gray? Well that he’s got a long way to go. There’s clearly someone much higher in the Ice Magic Totem pole, and it’d be nice if Gray could eventually get as powerful. I wonder if Gray and Silver will battle at some point in the future, and how Gray will fare. if I were a betting man, I’d hardly bet on Gray, but if this arc has done anything, its made me hopeful for Gray’s potential to shine. Hopefully Fairy Tail and Mashima-sensei treat him with care. 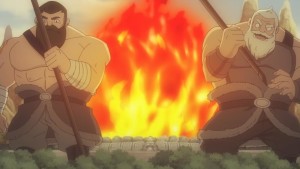 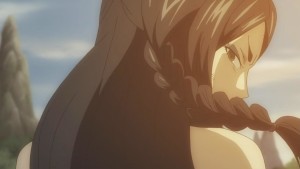 So with Atlas Flame melting the Village, mostly everything is restored to normal, and Minerva makes her escape. Talk about an anti-climactic battle, one that didn’t lead to much of anything. It seems that the whole Erza vs Minerva thing was just a side show to keep her occupied. I wonder if it would’ve just been better to have Erza not show up in this arc at all. In terms of the story, she didn’t really do much. Of course, had that happened, I guess this arc would’ve ended even quicker, and that probably would’ve made things worse, in terms of timing and adaption.

Thanks to the long recap, we still have next episode for the true epilogue to this arc, so this arc isn’t truly done yet, even though setup for the next one has begun. I honestly do wonder if we could’ve just gotten another two or three weeks of filler, and could’ve had a much tighter arc, rather than the uneven mess that we got here, but I’ll discuss the arc more in general next week, when it officially ends. 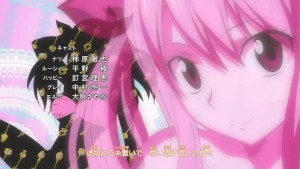 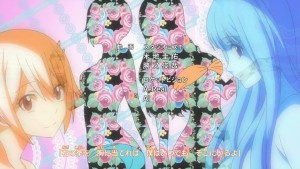 On a side note, we did get some changes in animation for the OP, and an entirely new ED. I’m not a fan of the ED personally, as it seems both sexist and kind of cheap. Cheap in terms of animation, and I’m not digging the naked silhouettes with one specific article of clothing. I just wonder why we couldn’t get more Mashima-sensei artwork, but I’m sure that’s not exactly feasible, especially how there was a new illustration every single episode XD

Here’s hoping next week we dispense with this recap nonsense and properly head into the Tartaros arc. 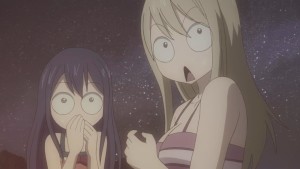 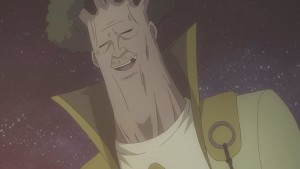 Seems like the final bits of finishing up this arc will happen next week. See you all next week!