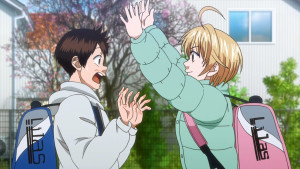 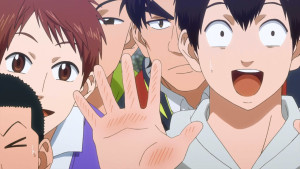 We’re back to playing tennis and going into a tournament that will be massively important to Maruo’s future. He absolutely has to win the first two matches of this tournament or it is simply hopeless for him. He won’t be able to even get in the door at the All-Japan Junior because of his lack of matches and therefore he’s finally reached the must win stage. Fighting with all he has in order to reach the stage that he wants to compete on.

Nothing huge to say about his first match in the tournament other than how it shows his insane growth. Something that was a bit more hilarious was how Natsu’s greeting for Ei-chan completely threw everyone off and starting the gossip train. It’s clear enough to us how the two characters feel about each other, but now it’s going to start getting pretty clear to the competitors on both sides that something is going on there. Of course it’s just some friendly goofing around and asking questions which is pretty harmless. But it’s enough of a tricky topic that Ei-chan decided that fleeing was a better option than anything else he could be doing there. 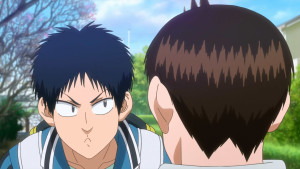 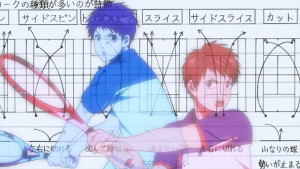 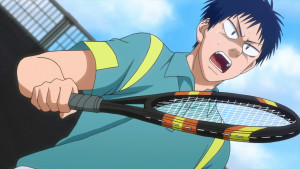 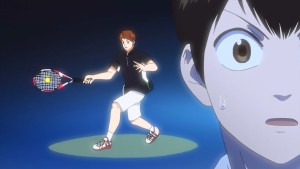 Again the first match was pretty straight forwrd in a lot of ways. A huge part of it was simply Maruo being worlds better than what his opponent expected from him. Sadly getting year old information from Araya was about the worst thing he could do. Koji was completely behind from the very beginning in part due to that. Maruo’s game has changed almost completely from who he was when he last played Araya. He gained his own style of tennis control and his game has improved in various respects. His serve is on a completely different level from before. It’s no wonder he simply crushed that guy, there wasn’t much other chance for this match to go. At the very least though it was remarkably fun to see Maruo take that guy out like that.

We only got to the start of the match against Miyagawa, but you can feel it’s going to be pretty good. Both these guys have everything to lose if they can’t win this match. Their futures are now riding on the matches they are taking part in. Maruo has gained improvements in almost every possible area. While we are starting to get the picture about how Miyagawa has improved. He’s improved his overall game by working on those one-handed returns. On top of that he’s also come up with that drive volley. Taking advantage of his powerful strokes but in a different way. It’s going to be interesting to see how the improved versions of these two guys clash. Will be a great comparison to be made to the first match. 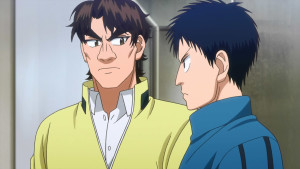 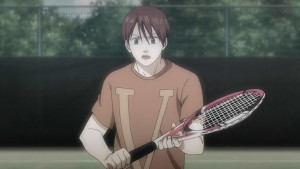 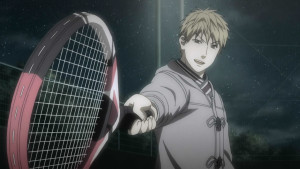 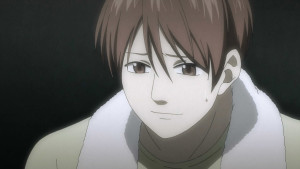 Some nice little changes to be found here. The one part being Maruo’s first opponent asking Araya about him before the match. This was referenced in a flashback during the match, but here they just gave it an actual scene where it fit in the timeline. The same with showing Miyagawa practicing intensely leading up to the tournament, reflecting him pushing to put his previous struggles behind him.

There was a lot of additional stuff covering Miyagawa overall. You could really see how he has been pushed to the limit because of his desire to change and not simply run away from his weaknesses. In a sense it’s a great showing of just how deeply the loss to Maruo affected him and lead him to try and find a new way to play. It was also nice just to see the impact that Oobayashi had on him. It’s a lot more clear here just how important that connection was for Miyagawa finding his way. 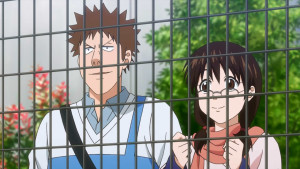 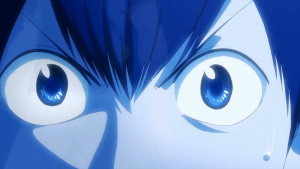 Since it was a tennis focused episode there isn’t that much to really say. The short obliteration by Maruo against Koji was great. The start of the match against Miyagawa was really good. You can tell that Miyagawa is feeling as much pressure as Ei-chan. It’s going to be an emotional ride to see the ups and downs. Both guys are going to feel that pressure and it’s a one-set match. That’s just crazy. One guy gets on a run….and it might be over. Anyways, I can’t wait for next week. It’s going to be fully Maruo vs Miyagawa with nothing to get in the way.
Score: A-