You Should Be Watching: Dungeon ni Deai wo Motomeru no wa Machigatteiru Darou ka 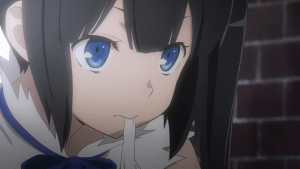 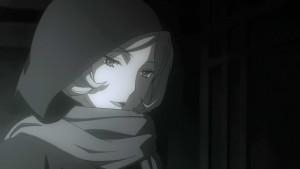 In the end some shows are just purely entertaining. Every season there are just some shows I wish I had time to cover weekly, but there’s only so much time in a week. Dungeon ni Deai wo Motomeru no wa Machigatteiru Darou ka (or just DanMachi for short) is one of those series. It had an enjoyable first episode and the series just kind of built up from there. At this point I’ve seen episodes 1-6 and definitely think this show deserves attention and hope that people will give it a chance.

In a lot of ways the show has a lot of familiar elements and cliches that you are going to recognize from other places. But to me that isn’t really a problem. A lot of cliches exist because they work and people like them. It’s all about whether you can execute them well and apply your own personal spin to them. In this case I think DanMachi does a great job of doing just that. I find myself invested in what is going on in the episode and how things are going to turn out for Bell and everyone else in the cast. 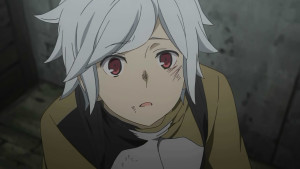 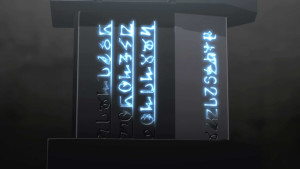 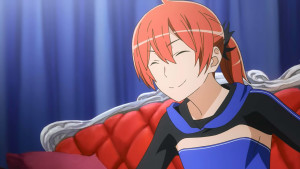 The setting for DanMachi remains one that I think is a fun idea. We’ve seen a lot of variants on the idea of being trapped inside a game and having to interact with those game systems on a personal level. This time though they stay on the idea of a fantasy world, but just have it so that these RPG elements are a normal part of their lives. A lot of the reason for that comes from the gods and goddesses that have come down to that world and are using their abilities to power up the human adventurers. Though quite a bit of it still comes from the world itself such as monsters dropping items and gems that can be converted into money.

I find it to be a fairly interesting world as a whole. You have adventurers who are powered up by these gods and goddesses, then you have assistants called supporters who help carry equipment, pick up items, and play a support role. You also have a bureaucracy that controls access to the dungeon and the various shops and services that would naturally crop up around this kind of situation. It’s a pretty interesting world and I just like how naturally the RPG elements are seen as part of it. Another interesting aspect is the familia. These adventurers can’t get stronger without getting updates from gods or goddesses so they have to join that god/goddess’s familia. The different familia have different focuses from crafting, item creation, to blacksmithing, etc. 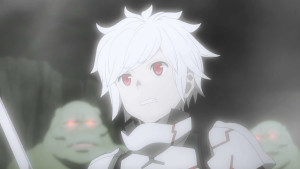 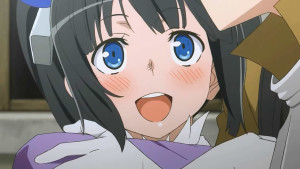 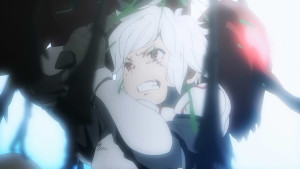 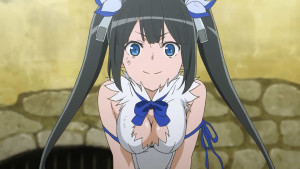 In the end the focus though is on the main cast. At the core of it is Bell, a very fresh adventurer who is the only member of the Hestia familia. Bell is a nice guy. He’s certainly on the level of being extremely good and sometimes naive, but at the same time I still like the guy. He recognizes his weaknesses and he wants to get stronger which leads to pushing himself into dangerous situation. But at the core he wants to help and protect others which isn’t a bad quality to have. Bell has grown through the first 6 episodes. He’s a lot more powerful than he was, but he hasn’t lost that goodness that defines him. He’ll fight a great battle, but also have his moments of weakness.

Of course the best character in the show is Hestia. The girl who has created an internet sensation from the moment she first appeared. The fan art explosion on Hestia is so big that it’s likely for people to stumble on her even if they have no idea what the show is about. Visually she’s a striking character, but to me the core is still who she is as a person. Hestia could have easily fallen into a tsundere category or something if they wanted. But really she’s just a really good person. Yeah, she falls for Bell pretty quickly, but she’s not this violent and jealous type. She feels jealousy sure, but that’s pretty normal. Her defining attribute is how far she’ll go because of those feelings. She’ll beg and plead for a weapon that can help keep him safe and alive in the dungeons, she will risk her own life so Bell doesn’t sacrifice his own, and she will trust him. She will give harsh advice on topics, but in the end she will believe in him. Hestia is just a very positive and bright character. She can be stubborn and jealous, but she has a heart of gold and shows it. 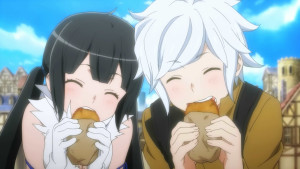 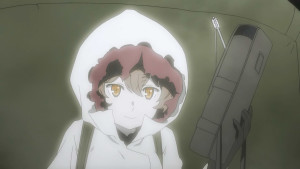 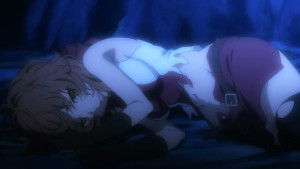 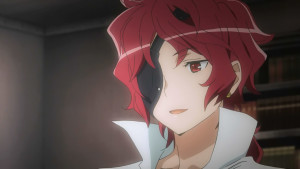 The other character that has gotten a lot of development in the first 6 episodes was Lili. This is the supporter that Bell comes across and joins up with to help make his dungeon crawling more efficient. Lili didn’t surpass Hestia as my favorite character, but I’ve come to like her character over time. Lili is an interesting sort. Much like Bell she’s had a rough past and history, though I’d certainly say her past was even more harsh. She didn’t get an easy helping hand from a kind goddess like Bell. Instead Lili for quite some time has had to suffer and endure on her own. Endure the fact that supporters are not well respected by adventurers for their contribution. Not to mention she is stuck in a familia that is basically a bunch of drug addicted scum bags. Lili is as flawed a person as any, but she grows and with some help gets past it. For all her mistakes, Lili suffered for that and did deserve someone kindly helping her out regardless of her mistakes. I think Lili at her core is a good person who just needed help in regaining hope in people and finding the right way out of her tough situation.

The rest of the cast is fine. Hephaestus is a great goddess who helps Hestia out quite a bit. A very entertaining person who knows where to draw the line in business, but will still help out a friend within those limitations. Eina is a very helpful person for Bell, looking into things on his behalf and just plain looking out for him. The other heroine in the series so far is Aiz, but she hasn’t had a lot of focus so there isn’t much to say so far. All one can say is that she is a badass with a sword and also very quiet. She’s saved Bell a few times and earned his admiration and romantic interest as a result. 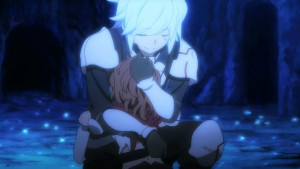 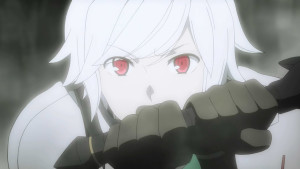 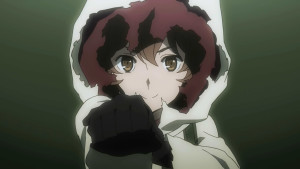 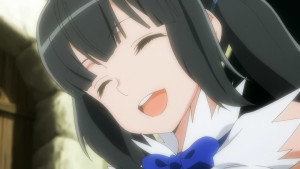 So far the story has covered a couple arcs and it seems like they are going at a solid if not brisk pace. It is also an action series so they’ve done well in mixing in the fighting on a fairly regular basis. The majority of the enemies for Bell to face have been monsters, but in a sense people can pose just as dangerous a threat. There are forces at work behind the scenes though such as a goddess who has her eyes on Bell and seem to want to force him to grow and mature quickly. I’ve enjoyed the few major fights in the show, especially the fight in episode 3. The visuals have been pretty good and smooth as a whole. They’ve worked great with the music. I have to give full praise to the musical accompaniment for the show. For specific scenes it is just perfect and really builds up the action. I fully believe that without the music and voice work being so good in this series that the emotional moments in episode 6 especially would not have come across nearly as strong.

I think in the end DanMachi has done a good job and has been an enjoyable ride. Certainly I can see the side of people who may not be as interested. But, I personally like this fantasy mixed with RPG elements setup they have. Bell as well may be a bit naive and overly kind, but he’s still a good person and a character that continues to grow. He’s steadily approaching his goal. He may have simply started with falling in love with a girl who saved him in a dungeon, but he’s growing into a person who can help protect others and those he cares about. Hestia remains the core of the show to me. Her upbeat personality and positive attitude really make it a fun show to watch. 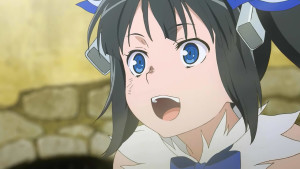 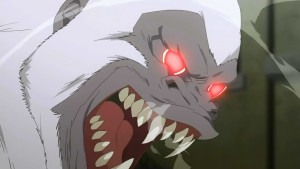 If a person is looking for an enjoyable action series, with some good music, a decent cast and a solid setting then this is worth a look. It’s not hugely fanservice driven and rather tells its story and lets people decide how to view it. I’d suggest people at least give it the three episode test and see how they feel. It’s a fun show and I find myself looking forward to it each week. I hope the rest of the season is really good and they manage to adapt the source material in a fair way. So as far as my personal view goes, I think people should definitely be watching DanMachi. It may not go down in anime history, but it is a good show.