It is interesting how sometimes when you guess at the content of a next episode when left on a cliffhanger your imagination goes wild and comes up with all sorts of bizarre possibilities – but when the next episode airs the result is often very normal, matter-of-fact and very much in line with what you have been shown of a series proper up to that point. And yet even after this happening again and again our mind still lurches out of it’s den! This was the result this week in Plastic Memories as well. Essentially Marcia’s software was “deleted” to save Souta from being unwittingly killed. But the process we were shown was interesting … it was as if she “came back to herself” … as if her state as a “wanderer” was something she eventually became, like putting on a coat or something. I am starting to wonder again whether or no the wanderer state is indeed programmed in them by SIA to “justify” the retrieval of the Giftia technology, irrespective of a human getting caught in the crossfire. Another thing I am still puzzled about is the reason for Isla’s physical breakdown. All the other Giftia we have seen at the end of their “lifespan” were not shown having any similar thing. Why is Isla physically disintegrating? Her mind retains its clarity and memory and sharpness. There are still way too many unanswered questions for my liking here and I am still suspicious of SIA. 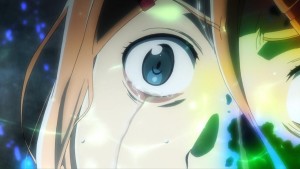 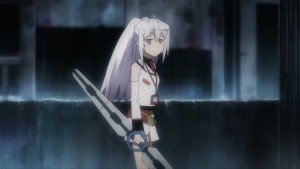 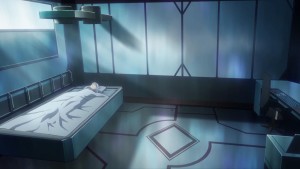 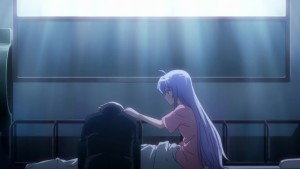 Well, needless to say after Isla attempts to charge Marcia even though her physical condition is deteriorating and she has been hurt before her “final charge” (she does not get to Marcia before Tsukasa shoots her down with the specialized anti-Giftia ray gun) she falls unconscious and is brought to the lab for repairs and recuperation. Being confined to bed while recovery turns out to be more painful for Isla than I expected, for we see more flashbacks fleshing out not only the sequence of events before her old partner Kazuki had her leg broken by Michiru’s surrogate Giftia father when he devolved into “wanderer” mode. Something happened to Isla and she was unable to move (a weird kind of breakdown or malfunction for some reason?) and then after Kazuki left Isla and went after the wanderer Giftia on her own she had her leg snapped by said Giftia and prosthetically replaced, and then next thing we know Kazuki is shown telling Isla she is going to leave her as a partner?! No wonder Isla’s personality is so … emotionally detached and characterized by pain from interactions with others. I am curious to understand more of this sequence of events though – I still feel there are details being left out that may shed a lot more light on what is going on here, not only as regards Isla but perhaps even Section One of the SIA’s Retrieval Department. 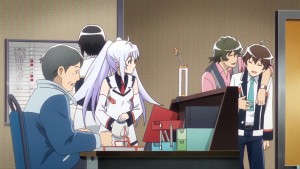 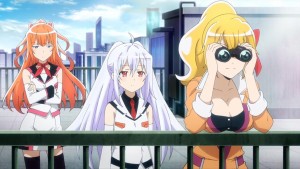 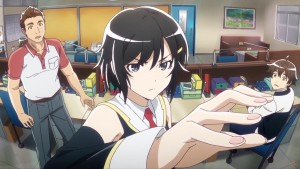 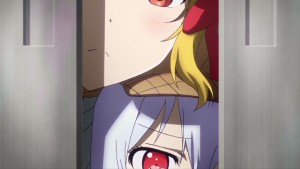 One nice thing about this episode is that it seemed to be a little more restrained in the “trying to be funny in a certain way” department. The not-so-great attempts at comedy this episode were at least not painful for me (an improvement) nor did they go on and on and on. A little bit of silliness ensues, this time primarily at the catalyst of the erratic and impulsive in-house Giftia engineer Eru. When she discovers that Isla seems to find her mind and attention constantly drifting towards Tsukasa – not only for his care and concern for her but also for the way he responds the sorrowful outcome of forcibly deleting Marcia’s personality and memories – she wants to help Isla in any way possibly and decides to tail him and gather information. Isla does not quite know what to do here, but follows along. Thankfully in this episode Michiru is finally behaving and interacting with others in some degree of believability for a change, and is both doubtful about Eru’s behavior and later refuses to take any part in it. When Isla is still unable to get answers to her questions from her investigations it is actually Michiru who gives some unexpected perspective on Tsukasa’s behavior … speaking of Tsukasa in probably the kindest way she has done so up to the present. 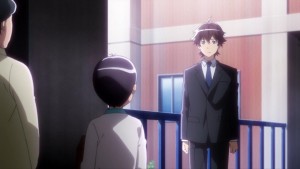 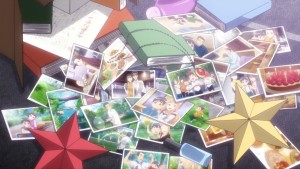 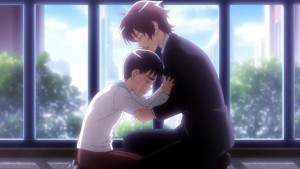 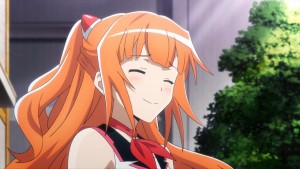 I must admit that the interaction between Tsukasa and Souta after Marcia was taken away was very moving and very realistic – it really became clear that despite all of his obnoxious behavior in episode 4 Souta really did thoroughly and completely love Marcia, and even though he may have totally understood why Tsukasa did what he did, or why Marcia had to be “terminated” like that, it still did not make sense to his emotions and his heart. And it seems Tsukasa understood that, and understood that Souta needed to cry long and hard. Going there on his own while “in the dog house” in a way was really an excellent thing for him to do, and here we really have the first half of the overall content driven home to the viewers that Tsukasa really does have a gentle heart and IS suited to being a member of Section One. I don’t know if he would be able to last in any other SIA retrieval center. 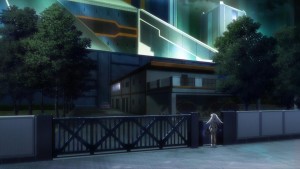 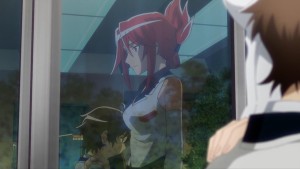 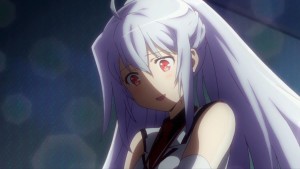 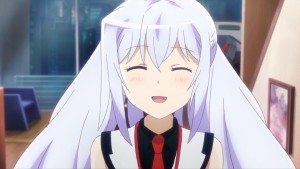 The other half of Tsukasa’s suitability for his job in Section One is in his interaction with Kazuki. He is finally told that Isla has only a little over a month in her “lifespan”, and while knowing this he still decides to stay with Isla to the end, knowing full well she will be gone soon. The impact this has on Isla (she accidentally overhears their conversation) literally appears to transform her entire inner makeup, almost “undoing” the initial seed planted in her unwittingly by Kazuki. It is no wonder Kazuki drinks so often – never mind the job she has, but what she unexpectedly did to Isla must gnaw at her conscience. To her credit she seems genuinely happy that Isla has found a partner who is has the strength and willingness to stay by her side to the end. And Isla seems to know it too – it is obviously a huge deal for her, and at the end of the episode we see a genuine smile bloom across her face that is downright beautiful to behold. Where things will go from here are still kind of hazy to me, but at the moment I suspect we may go deeper into the underbelly of SIA.