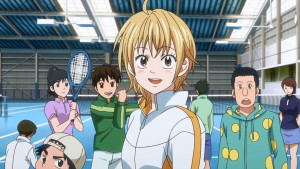 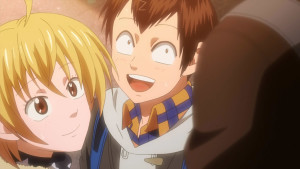 This was a nice and busy episode. Perhaps fitting that lot of the focus in this episode wasn’t on Maruo, but on Takuma. With the second season starting out in Florida there wasn’t much focus on the regular cast and it is good to get back to those guys. Plus I think it was a good choice since Takuma hasn’t been as fully explored as he could be. It was interesting seeing his perspective on the growing connection between Maruo and Natsu and how his chance really has passed him by because he was too passive about it.

This was another reminder that Ei-chan really needs people looking out for him though. Once again he was pushing his body pretty hard and could have really done some serious damage if Aoi hadn’t stepped in. No exact details, but you could see how the coach was getting a bit worried as the match went on. Ei-chan is really observant and good at picking things up ,but sometimes he is so focused on the repetition and perfection that he doesn’t really notice what it’s doing to him. You could see that same desperate drive in his match against Alex, he’s the type you really need to watch out for or he’ll overdo it. 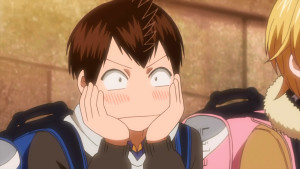 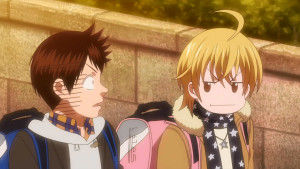 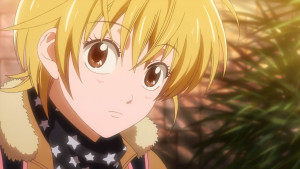 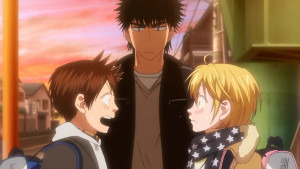 It was a great surprise though to have Maruo try to confess to Natsu. I’m not even surprised about the timing because it was a pretty perfect moment to do so. He was out of this world happy to see her again after all this time and the same was true for Natsu. Plus I think being driven a bit crazy by Ike’s joke back in Florida was enough to push him into making that move before it was too late. I also liked the fact that we got to see a bit of a flustered Natsu. She was playing a bit in terms of asking if he had been jealous, but clearly not expecting such an honest and upfront response to that. It was such a good moment until….Takuma.

I have nothing but sympathy for Maruo there. He really tried….he really tried to confess. Damn you Takuma! Sure, the moment wasn’t quite perfect, but who cares he was going for it! There was no way she’d turn him down either if he could have just finished that sentence….gah. I’ve already read through this, but geeze seeing it in action again is still pretty frustrating. You just want to see something happen, but I agree with Maruo that it was forward progress. He’s finally mentally prepared to say it, just a question of getting the right moment. 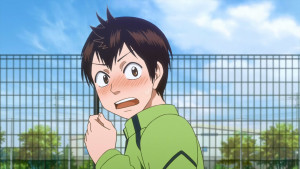 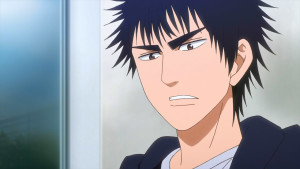 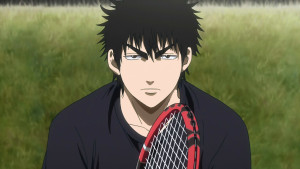 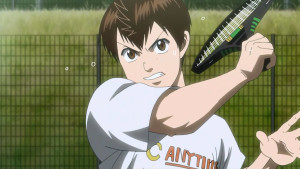 The other big part of the episode was the practice match against Takuma. This was a big opportunity for Ei-chan to show how far he’s come and yet how far he has to go. He was putting pressure on Takuma there, but you have to think someone of Takuma’s skill would have been able to adapt given enough time. This is someone who definitely is above Alex’s level and that showed. His serve is just a devastating weapon and one that Maruo has kind of neglected for some time. Having the first shot is a huge advantage in setting the pace and also creating chances. Those first few points were just golden opportunities for Takuma to score because he either won instantly or Ei-chan could barely return it. No wonder he’s risen pretty highly as time has gone on. A guy who was born with amazing physical talent is coming into his own. He’s not so far away that Maruo can’t ever reach him, but it’s a good reminder how big the world is.

It is kind of amazing how Maruo seems prepared at times to throw away parts of a game so he can try to improve something. He seems to grasp pretty quickly when he has no chance of winning and when it’s needed to change his game. Might be a good lesson for Aoi that he needs to watch out for that. But I still agree with the goal of this practice match. It was clearly to teach a lesson about serves and how Maruo’s has been….average to below average. He needs all the weapons possible right now. Winning the All-Japan Junior is a major step and as it stands he can’t win, but if he applies himself…maybe. 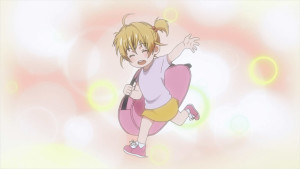 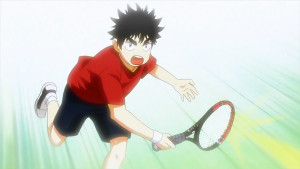 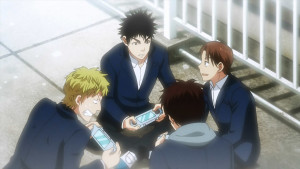 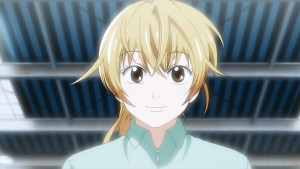 One change I did appreciate was just showing that quick scene with Takuma asking about Natsu. In the manga he just kind of appeared out of nowhere to interrupt that confession attempt. Not that I was any less frustrated to see that get interrupted, but I appreciated the little addition.

But really that was just the tip of the iceberg around Takuma in this episode. This just gave a lot more focus to him and his mental state. It showed how he’d been interested in Natsu for all this time and his struggle with being serious about tennis after getting stomped by Ike. I found it a really nice addition, showing how Natsu has been an important part of his life. Maybe one that like tennis he just accepted as being part of it halfheartedly without seriously pursuing it.

Plus damn…the best addition might have been him bluntly asking Natsu via text how she felt. I really don’t think that was in the manga. Plus here is one of the first outright clear expressions that yeah she is romantically interested. In some ways I’m just impressed that he went ahead and did that. He wanted to find out the score and well…he did. I do feel a bit bad for Takuma, but that’s how it goes. 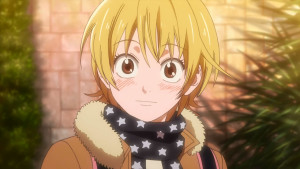 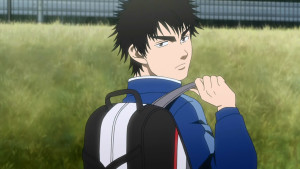 This was a good episode, no doubt about that. It moved the story forward and Maruo has learned one more thing he’ll need in order to compete going forward. The preview was quite fun since we’ll get a bit of a look at Natsu’s point of view. The one thing I like about this series is that Natsu has her own battles, she isn’t just a static love interest. She’s chasing her own dreams, the focus just happens to be on Ei-chan.
Score: A-