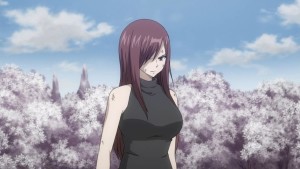 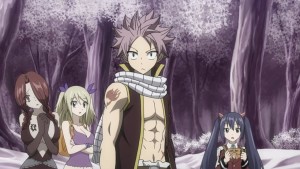 Its episodes like this, where the character dynamics, the plot, the build up, are all firing on all cylinders that make Fairy Tail’s second season such a bittersweet experience. The story couldn’t be better, more entertaining or exciting, and yet… The adaption still has its issues that muddle and bring down an otherwise superb episode.

In sharp contrast to last week, however, This week definitely had the good severely outweigh the bad. Is it enough to forget about the recycled content and the fact that the real episode doesn’t start until about 6 minutes in? No, not exactly. Having something that I’ve been waiting for since the start of the series happen definitely did help though. 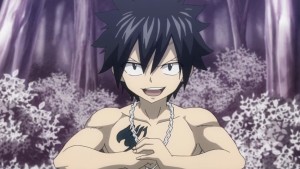 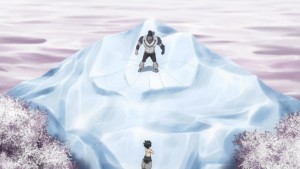 If you all remember, I had mentioned last week that this episode would be Gray’s episode to shine. Boy did this episode deliver on that front, and in such a perfect way that I was kind of surprised. It was definitely one of those “Wow, this can’t be true… but it IS!” moments that you rarely see or feel in entertainment.

And, if we’re discussing feelings then its been a pretty frequent feeling of mine that Gray has been underutilized or just downright misused in some of the more recent story arcs. The Grand Magic games arc was probably the worst offender, but thankfully, this episode changed all of that. It was in this episode that Gray’s whole rise back to prominence and redemption began again. Finally, all the latent potential of the character is really starting to show itself and I couldn’t be happier. 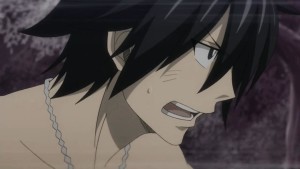 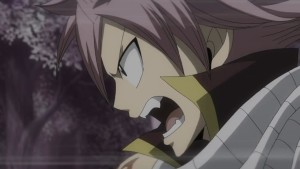 I think one of the most interesting aspects of Gray is the potential of his to really be the antithesis of Fairy Tail’s main character. I really do believe that Gray and Natsu are fundamentally different characters, and not just because one has Fire Magic and the other Ice Magic. Its their fighting styles and the nature of their core strengths themselves that are at odds with one another. Gray’s magic is all about methodical, creative use of his powers, he’s  like an artist. Natsu, on the flip side, is the brash, “force through everything with raw strength” character, you could almost argue he’s more or less a traditional shounen lead . There are things that make Natsu unique but that’s an entirely different point (one I’ve talked at length about before in numerous other episode posts).

And its because of the very nature of Gray’s abilities that seeing him use his brawns more than his brains in recent arcs has been so disappointing. Gray is a much more interesting character than just someone who rushes at an enemy blindly with his magic. 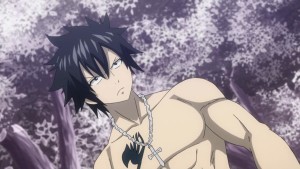 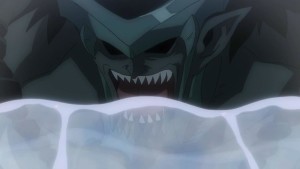 If you think about it for a second… Gray really does have the makings of a solid protagonist himself. He’s got the tragic backstory, a reason to fight, a rival, personal loss, a girl that’s head over heels for him and a very cool power set to boot. You’d think Mashima-sensei was creating a powerful protagonist with Gray if you looked deep enough. And for all my complaints about Gray being under used or misused, it was indeed Mashima-sensei who created the perfect situation for him to shine.

Doriate’s power (the pretty OP one) is the perfect foil for Gray. Gray’s magic is all about being clever and intuitive, and its in this desperate situation, where Gray doesn’t have his full power, that he uses his head and fights the best fight he’s ever fought. Gray simply outdoes himself, not only overcoming a huge hurdle, but really evolving to get past his issues and pain. 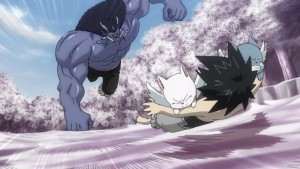 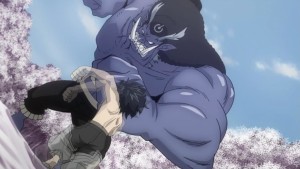 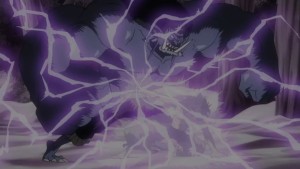 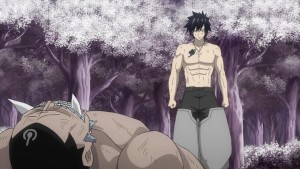 For Gray fans, that whole moment of Gray realizing Doriate’s weakness, and then rushing forward and using the weird purple Ice against him was the payoff we’d been waiting for. The fact that Gray couldn’t melt the ice before because of his own fears and lack of confidence? PERFECT!

The saying, “You are your own worst enemy” rang doubly true in Gray’s case. It was finally this desperate situation that made him rise above it all and succeed when it really counted. And its funny that, unknown to him, he actually really saved Erza’s hide in the process too! XD 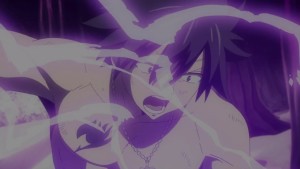 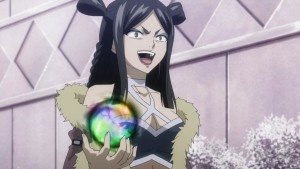 I think one of the other major reasons why I liked this episode was because it was squarely focused on Gray, or at least it felt more focused than usual. The core issue was definitely Gray and his battle, even if we did jump around periodically a bit.

The jumping around actually really worked well in this episode, for a change. The switching over to different characters during Gray’s battle actually made sense because it showed us how that battle was affecting everyone else. Seeing Erza gain some kind of chance because of Gray’s efforts, for example,  was an effective use of the whole cutting to another character thing that the series has grown overly fond of. Erza’s battle with Minerva, until that point, had been pretty one-sided, and it was nice to see Gray kind of change the dynamic. 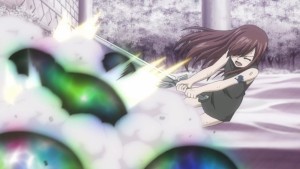 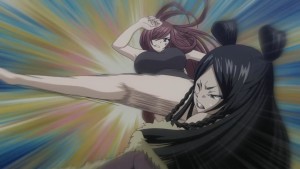 I’m not too excited about that whole face-off anymore to be honest, and that’s not something I thought I’d say when it first started a few episodes ago. At the moment, the whole thing feels like a distraction, something to keep Erza  busy while everyone else is going around, doing things.

I realize I might be contradicting myself a bit, but I think now that I would’ve been totally cool to have this fight not happen in the story at all. It is what it is I guess, and  at least it’s progressing at a decent pace. Having it there to change things up every now and then isn’t bad either. 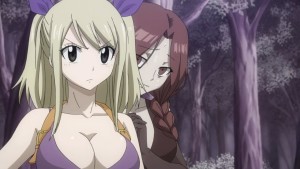 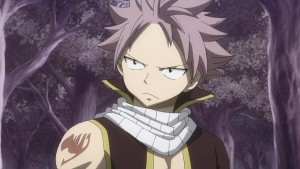 Natsu on the other hand, didn’t find his much sought after voice this episode either, but he was involved in a pretty cool scene that capped off the episode in style. Natsu hasn’t had a lot to do as of late, but the few scenes that have happened, have given us something to look into. His meeting up with Lucy and Flare was one such scene that was just another one of those nice little moments that had you peer into what makes Natsu so special.

Natsu, despite how brash, angry and brute-ish he is, is a pretty nice and kind dude at the end of the day. Seeing him relate to Flare and promise to save the village was another such moment that really just made me smile. Of course, things only got better from there. What happened next, was just awesome. 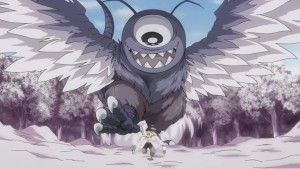 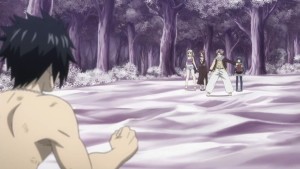 So… Gray, Happy and Carla come running, a giant crazy man eating Bird at their heels. The exchange between the two groups that happens at that point was pretty cool, and of course, Natsu and Gray’s little team-up nod was the moment that pleasantly surprised me.I was totally with Natsu when he asked Gray why he hadn’t just finished it off, but Gray’s answer rang pretty true. Of course Gray couldn’t use his magic yet, he’s finally gotten a handle on the Ice in the village and can possibly undo it.

And really, for all the head-butting that happened between Gray and Natsu, the two really settled into the roles they needed to fulfill, within a moments notice. 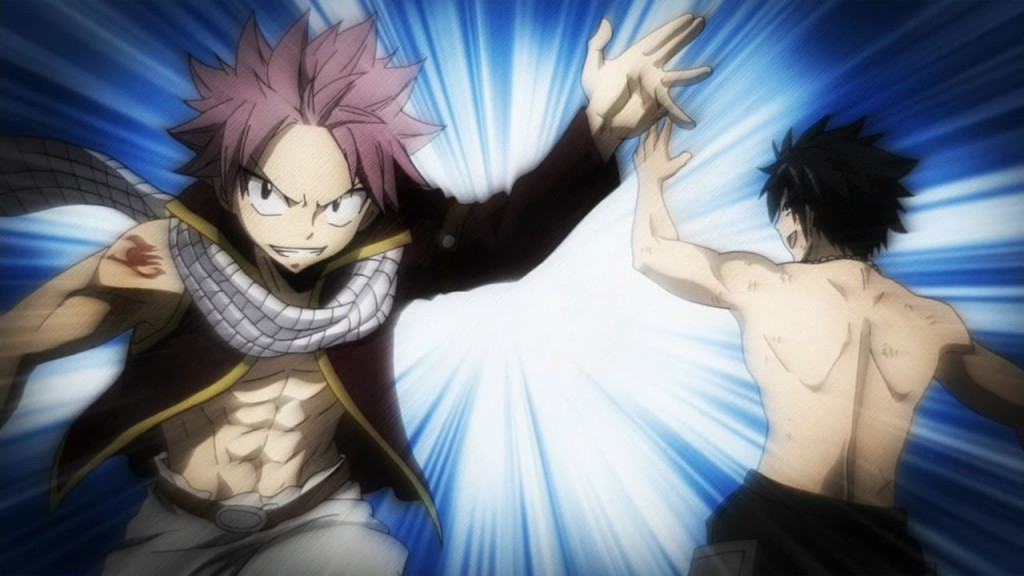 YES, that high five/tag in as the episode ended was undoubtedly cool. It really did feel like two brothers, brothers who don’t generally get a long, coming together and working as a team in a time of crisis.

Its moments like these, that you didn’t even know you wanted to see, that end up making Fairy Tail so special. And its clever storytelling too, starting off the arc with Gray and Natsu bickering, and building it up to this moment. Mashima-sensei again, showing off the skills for those character moments that  really do define Fairy Tail. 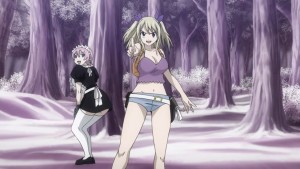 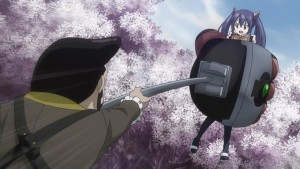 Now… Having said that, I can’t discount the fact that despite how good the story was, the actual production and adaption of the content in this episode was far from perfect. I really do want to know why the content gets constantly recycled, and why we have a longer recap on top of that. It hurts more some weeks than others sure, but it still worries me that even on one of its best weeks, the production of this show is what I’d call “a mixed bag”, at best.

In any case, this episode gave me an awesome Gray centric battle and a bro moment between Natsu and Gray, so I’ll still count as one of my personal favorite episodes. Also in the spirit of the bromance between Natsu and Gray this week, we got a kickass Hiro Mashima Illustration in the ED to celebrate it: 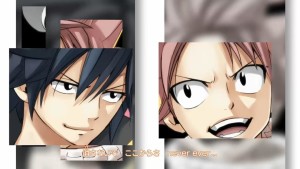 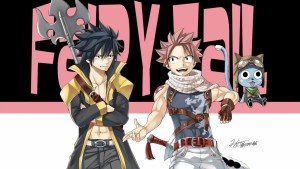 Beyond that, it also seems like we’re nearing the end of this small little arc, and I’m curious to see how this whole arc wraps up. Hopefully it doesn’t get stretched into several episodes, but one can never be too sure…

Alright! XD That’s enough passive aggressive ranting from my end. At the end of this Friday, we did get a pretty darn good episode of Fairy Tail, adaption issues aside. 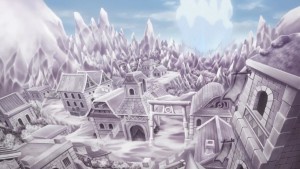 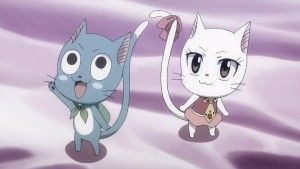 Seems like Natsu’s going to take center stage next episode, and we’ll finally get an idea about the whole Frozen Sun Village Mystery. And yes, this Preview is slightly spoilerish, so avoid it if you can. I’ve kept the super spoilery bit out of the thumbnails. See you next week!