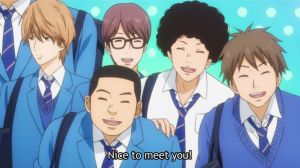 The cast expands in a big way this time, although we’ve yet to see if those expansions were a one-time event or if we’ll see any of these characters again in the coming weeks. What this episode really does is give us a better picture of the world outside of our Trio of Ultimate Niceness, and it’s… well, not nearly as nice as they are. Although it does have 100% more afro, which is definitely a plus.

Just in case you forgot, the early scenes remind us that Takeo is huge and Suna is suave, as Takeo understandably terrifies a woman by carrying her baby stroller up the stairs without telling her what he’s doing first, and Suna has to sweep in and explain. You know, Takeo, you could really stand to work on those communication skills of yours.

Then we spend a few minutes remembering how adorable Takeo and Yamato are together, because you might have forgotten that, too. 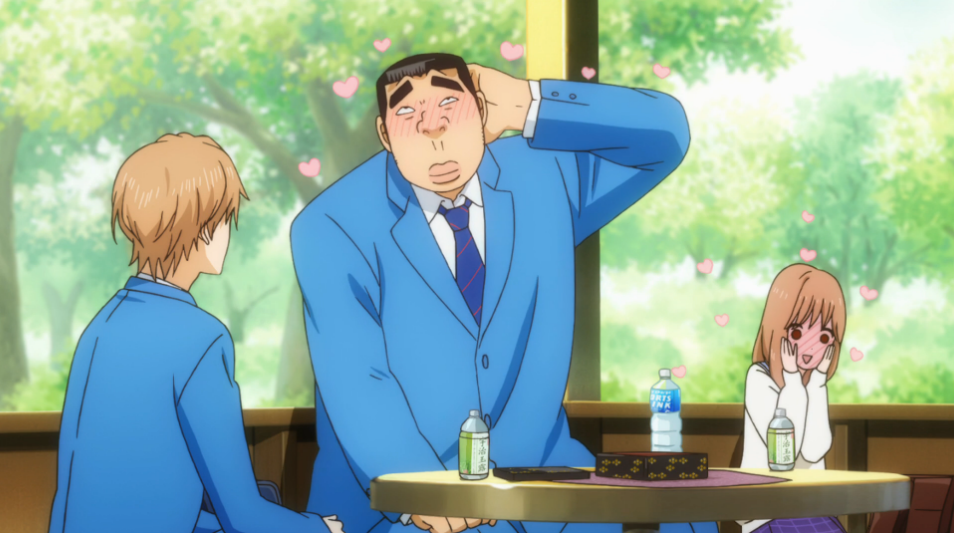 J/k. There’s no way you could have forgotten this.

Takeo is giddy with joy and keeps asking the universe to “stay like this forever,” but of course the universe doesn’t work like that, and the dreaded Conflict Monster enters our story in the form of a singles’ outing. Yamato told her friends (at the all-girls’ school) that Takeo is Fabulous Max, so they want to meet him and his guy friends, too. In a nifty twist on the classic “girl who all the girls crush over” anime/manga trope, Takeo is the apple of every boy’s eye, so he takes four lucky classmates (and Suna, because BFFs) along on the date.

Yamato’s “cool boyfriend” isn’t quite what the gals expected (they keep comparing him to a bear, and dammit, now I’ve got “The Bear and the Maiden Fair” in my head again, so thanks, anime), and they all immediately find Suna Too Cool For School. As the date progresses, though, three of the girls seem to take a liking to Takeo’s friends (who all seem decent if not interchangeable, afro excluded) and things settle into a nice social outing. 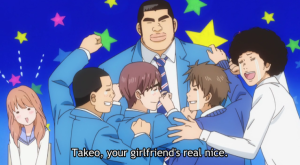 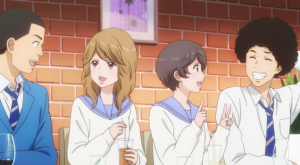 Or at least, they do until two of the girls disappear into the bathroom for a while. Both Yamato and Takeo (what was your plan here, dude?) leave to check up on them and hear the girls talking smack on Takeo. Yamato responds by crying out Takeo’s Unbreakable Coolness and fleeing in tears. Takeo catches up with her outside, but he’s more upset because she’s upset than because of what the girls said. “There are all kinds of people,” he tells her, and this is true, and some of those people happen to be jerks. Props to Takeo for not letting the haters get him down (although arguably this is just because he’s used to it by now, which continues to kind of be The Saddest).

The two prepare to head back inside, when a fire(!) explodes(!?) out of the building (is anything in this city up to code?), forcing everyone to emergency evacuate. Suna’s already called the proper authorities, but in the meantime, the two smack-talkers are still trapped inside, and oh boy, we all know where this is going, don’t we?

Because Takeo is the Action Movie Hero to Suna’s Normal Person Hero, he’s not content to just call in the professionals: Oh no, he’s gotta run inside and save people himself. Which he does admirably, only to get caught under some falling debris and nearly burn to death. Good thing we’ve got Normal Person Heroes outside (Suna knows just when to phone in a pep talk, and if that didn’t work Yamato was gonna run in there and drag him out herself) to convince Takeo to hitch up his Action Hero pants and bust outta there in the most dramatic way possible.

The whole thing is over-the-top absurd, but it sorta gets away with it because it refuses to take the scenario seriously. It takes the characters seriously—Yamato’s panic is achingly real, and Takeo’s defeatism (more on that later) just about broke my heart—but the show knows this whole situation is silly, and it plays it as such. The animation even seems to adjust to make it look more like a GAR action series, as Takeo takes on additional shading, detail, and line thickness to better resemble someone out of Jojo’s Bizarre Adventure rather than a shoujo romantic comedy.

Point being, I laughed for a solid minute at one point, so I’m mostly okay with it. Especially because this happened:

Real friends put out the fire on your ass so you can focus on snuggling your bae.

Which the whole “serious characters + absurd scenarios” thing makes simultaneously hilarious and sweet. Best Dude Forever. (Oh yeah and the girls change their minds about Takeo and apologize to Yamato for doubting her. That happened, too. But mostly, bromance!)

Lest you think I’m all shoujo sparkles and rainbows about this show, I confess I didn’t love this episode nearly as much as previous ones. In addition to some recycled, melodramatic plot points (sudden disasters happen so often around here it makes you wonder if Lucky Abrams is in town), the entire resolution to Yamato’s friends being shallow and mean was too generic and unsatisfying for my tastes. I get that OreMono is trying to critique shoujo itself by showing us all these standard cute-girl heroines smitten by the standoffish hottie, but it’s starting to feel like Yamato is some kind of unicorn rather than just one of those “all kinds of people” Takeo mentioned. Some diversity in the female cast would go a long way toward fixing this issue, but it sure didn’t happen this week.

Moreover, while OreMono has done a really nice job of sidestepping the problems that come with these “beauty on the inside” stories, they basically told one this week, and they told it in about the most extreme way possible. “People may judge you by your looks, but they’ll come to realize how great you are if you run into a burning building and nearly die trying to save them!” isn’t the most helpful (or applicable) of life lessons. 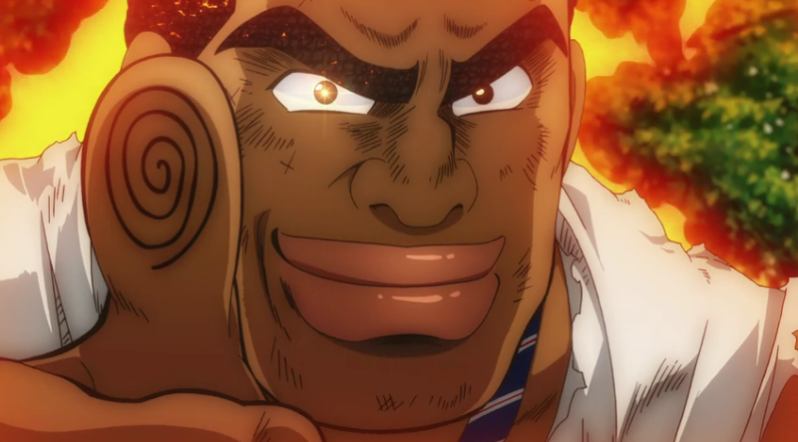 Despite its weaknesses, this episode did do a solid job of highlighting Takeo’s continuing communication and self-esteem issues. I mentioned a couple weeks ago that there’s an undercurrent of sadness in this comedy, and we continue to see that here. While it’s admirable that Takeo never lets other people’s prejudices affect his general kindness (he runs into that building because he genuinely wants to help the girls, not because he thinks it’ll change the way they see him), there’s also something kinda tragic in how little self-worth he seems to possess. He even decides that the reason he’s about to die is because he’s been “too happy” lately, one of those quiet, understated lines that cuts straight to the bone.

Takeo may have “gotten the girl,” but his internalized lack of confidence is still very much present. While surrounding yourself with good people who love you can certainly help with that, ultimately it’s up to Takeo to realize his own worth—not as Yamato’s boyfriend or Suna’s buddy, but as his own person—and that he deserves happiness as much as the next kid.