Episode 4 was definitely a transition sort, and once again so many things are thrown at the viewers that it is hard to know where to begin! No doubt part of the reason is simply that the story of the series is so detailed and has many more plot threads going on in the background than expected. Tiny bits here and there are touched on, almost sprinkled onto the attention of the viewers in little bits and pieces, in a way. Overall the effect has been quite successful for me in terms of story presentation, but it can be a bear for me to organize my thoughts about in terms of blogging it. Between this and Kekkai Sensen Bones studio has hit home runs across the board this season, and while they are both very different series I like the fact that they are both visually surreal and engaging in their background music. Well, to the episode then! 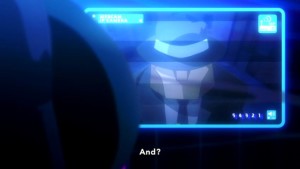 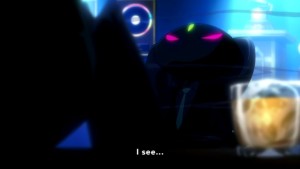 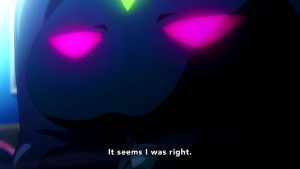 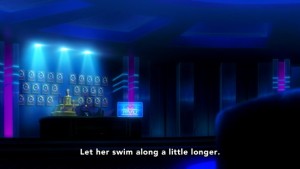 In terms of overarching plot and continuing from the last episode, it looks like the guess that Ogasawara was indeed the same figure that was speaking that was video conferencing with the evil boss of Unicorn Virtual Music Inc. in episode 1. They show him again in this episode doing the same thing. It does indeed also seem that the evil boss was the one who pulled the strings to have the band battle take place in the first place. Of further interest is that while last episode the lead singer of Criticrista (Rosia) picked up “something” about Cyan from seeing her perform she was not the only one – Ogasawara did as well, reports this to his boss and gives him her name as well. It seems the aim of the boss (who interestingly knows of President Maple by name) is indeed to utilize her still unpolished skills to achieve world domination, and the way it will happen is to have her working in a band for him. For the moment he wants to let her polish her skills before attempting to obtain her, and tells Ogasawara to keep observing at a distance. 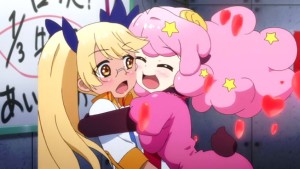 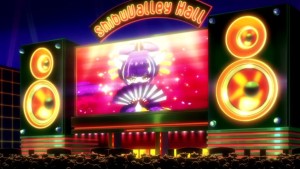 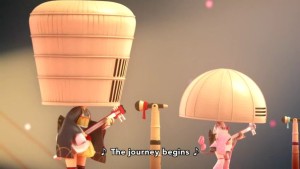 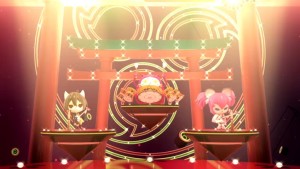 The band hinted at at the end of episode three by the high school students from another city-state (interestingly they were all members of another band known as Uwasanopetals … I wonder if they will show up in future episodes as well?) debuts this episode, and they have an absurdly long name: Tsurezurenaru Ayatsuri Megenan. It turns out Moa is a diehard fan of this extremely popular group (since one of the things they often sing about is being far from their land of origin, just as Moa is), and when Retoree obtains tickets to see them live Moa is ecstatic. On seeing this new band perform one of the things that stands out the most is the fact that they have a very unique sound (an odd blend of contemporary rock and traditional Japanese music)  and look (from the “Far East”) in addition to being absurdly talented and are comprised of three members: Un (guitar and vocals), A (bass and vocals) and Darudayu (leader, vocals and drums) – both Un and A wear the basket style hats of the wandering Buddhist musician monks known as the komuso, curiously. After the concert Plasmagica runs into them by chance in a restaurant afterwards (and Retoree shows her braver side – yay for her), once again Darudayu sees a “something” in Cyan like the others have up to now. I have found myself wondering just what exactly it is others keep picking up from Cyan – is it a “feel” or “intuition”? Are they seeing something the audience is not shown yet? 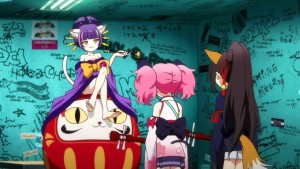 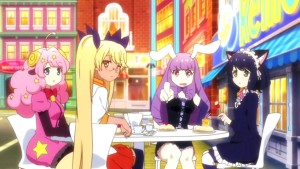 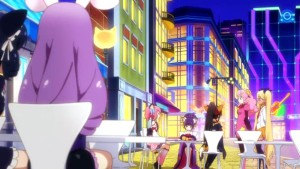 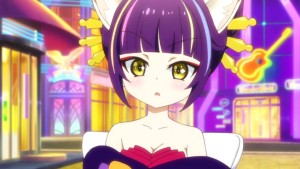 Obviously Tsurezurenaru makes a big impression on the member of Plasmagica, and they begin to think of “what they could learn” from their performance and how they could apply it to themselves. Their first thought is to give themselves a “unique” exterior look, and after going through a cosplay brainstorming session in Cafe Angelica (much to the delight and embarrassment of three of the members of Shingan CrimsonZ) Rom arrives from a hard day at work and once again proves that of all those who are part of that company he “gets it” the most – he is outspoken and blunt in his opinions, yes, but he also has a sensitive side to him. Fortunately his feedback looks as if it helped to prevent Plasmagica from veering off into unneeded territory for now, and their being able to focus their attention on aspects of improving their band as a whole more productively – by taking away the essence of their musical talent. 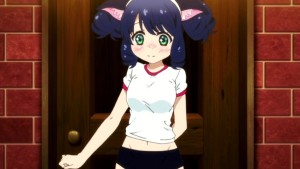 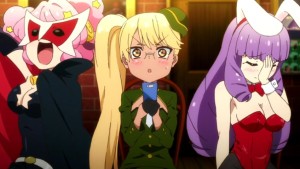 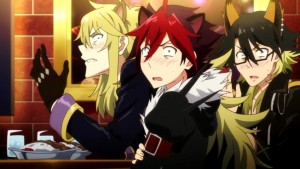 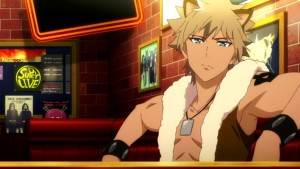 Aside from these points there were quite a few snippets dropped on the audience that may be taken up later on. For example, we discover that Rom and Trichronika’s lead singer Shu Zo are old friends (acquaintances?) who used to be a part of the same band some time ago, and that Shu Zo has an unexpectedly aggressive and ambitious side underneath his sparkly exterior. We discover that Moa is homesick at times and periodically gets contacted by her mother via the “interplanetary communication system” that her race of aliens possesses. We see Chuchu beginning to realize that there is something very different about Cyan as compared to other myumon – there are too many things she is unaware of. We also get a curious moment of President Maple hanging out in the studio late at night all by himself and apparently doing something in secret, as he shows nervous surprise when he and Cyan run unexpectedly run across each other. We also see Maple asking Cyan if Ogasawara said anything to her during the band battle with Criticrista. It looks like Maple has things he does in secret as well that will be touched on in later episodes…if Maple has indeed seen that “special something” about Cyan that the others have glimpsed he does not seem to be letting on about the fact. 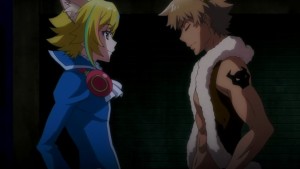 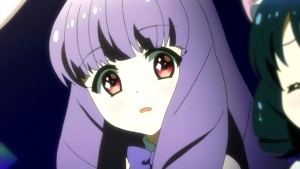 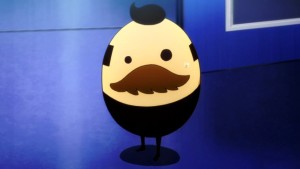 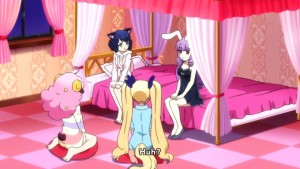 Wherever things are headed from hereon out one thing is becoming clearer and clearer – I think the main point of the entire story is the fact that Cyan is becoming a different person … she has always had all the potential inside her, though. By her own admission she is very introverted. Wishing to have the courage to join her high school K-On band is one thing, but as we have seen in the episodes of the series so far there is also the courage to interact with the others, and then the courage to speak out and contribute to the development of the band’s music. This episode had her being asked to write a brand new song for Plasmagica to perform. Eventually she will likely become the leader and lead vocalist as well, and I would not be surprised if she ran face first into Chuchu’s ambitious side in the process, which means she would have to face and deal with conflict within the band and with friends as well … those are quite a few steps to go through for someone as introverted as herself. Yes, one could chalk it all up to “courage” and one would not be wrong, but I think it would be incorrect to simply say it is “only courage”. There is much more in the actual growth process for her being shown – and for anyone, for that matter.