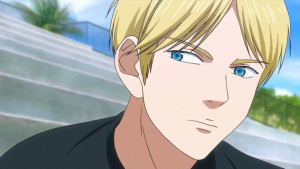 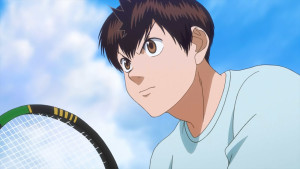 This was definitely a good episode with a quick match against Ike before moving into the really big match of this Florida trip against Alex. Alex has been a pretty big presence and someone who has helped Maruo get past some of his troubles. He’s also the character who has been noted as having difficulties in his pro career. This is the perfect matchup for Maruo to show what he’s learned during this trip, but also for Alex to get some additional character development. When it comes to Maruo his opponents get as much if not more focus than the MC himself since we’re not going to see them again soon. Luckily in this case I think Alex is a really likable character.

This chapter really shows the power of Maruo’s notes. They can analyze a person’s past extremely well and also help predict the future when people start to change their patterns. It’s a great tool that helps force a player to change their game while Maruo gets to continue playing his style and gain an edge. Right now its Maruo’s tactics and strategy that is giving him a real edge. One of the rare times in this show where Maruo is the guy who took the early lead and just needs to win another set in order to come out on top. But I can’t imagine it will go that smoothly XD. 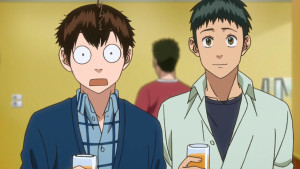 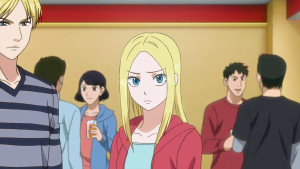 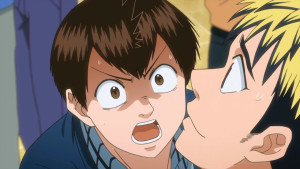 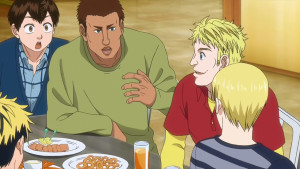 A fun aspect of the episode though was the New Years party. I’m sure Ei-chan was so lost in his own head and his troubles that he didn’t even think about what the date was. The days just blowing by as he dedicated his whole being to tennis. But this was a good chance for him to relax and have fun with the other tennis players. I think the biggest shock for him was finding out that Marcia was just 13. At least it makes more sense why she acted more immature than he might have expected at times XD.

The big laugh of the episode for me was with Ike lying that he was engaged to Natsu. The dead look in Ei-chan’s face was golden. All colour in his life just vanished in an instant XD. I can’t even blame Ike for making that kind of joke. Plus he kind of paid for it later with Maruo looking like a madman and asking if it was the truth or not. Ike might not have made it out of there alive if he had been telling the truth. Certainly it’s the serious people that are the scariest when they snap. Certainly it shows just how much he likes Natsu, which of course leaves one hoping he’d just hurry up and tell her that already. 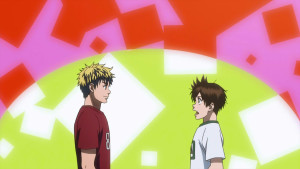 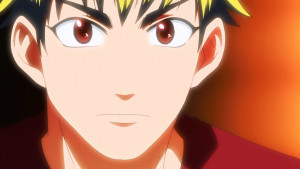 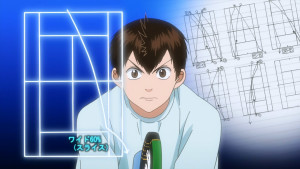 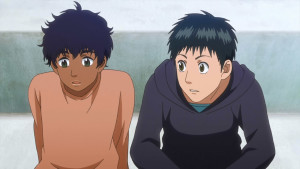 There wasn’t much to say about the tennis match against Ike himself though. It was a pretty one-sided beating and that was about it. Of course though that makes sense. Ike is an extremely good player and he’s continuing to improve as his pro career goes on. Maruo improving is just to the point where he can tell just how amazing this player is and have to force him to play more seriously in order to beat Ei-chan like that.

The match against Alex is going to be fun to watch unfold. I really do like Alex as a character. He’s a good guy and he’s working extremely hard to improve as a pro. While it’s a big shocking that he’d try to change himself during a match against Maruo, he is playing against the MC so this is a good time for him to grow as a player. I think he’s gaining a very valuable understanding about himself and how he can improve. His father felt it was right to just ignore the past since you couldn’t change it and at times Alex got too caught up on his past failures. But I think Ei-chan provides an example of how you can learn from your past while looking forward. You can let some past events slide, while others can teach you how to play better in the future. It’s all about finding that balance. For that reason I’m excited to see the rest of this match and how both players grow from it. 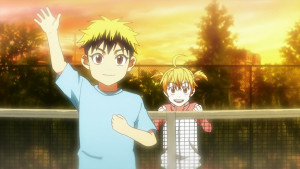 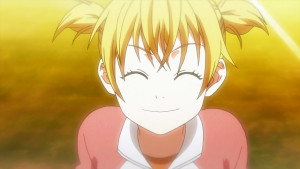 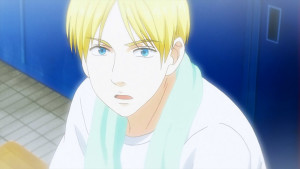 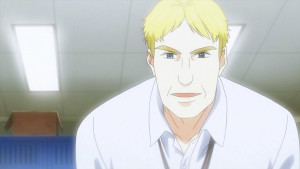 As might be expected the bigger change here was adding more depth to the backstory for Alex. His flashback was in the original material, but they gave his troubles a bit more weight than simply feeling pressure after going pro. It’s understandable that he’d struggle a bit with his family situation. Feeling responsible for his father putting so much time and money into his tennis career and also for Marcia. To allow both of them to chase their dreams even when his own business wasn’t all that solid. Of course the key thing for Alex is not letting that drag him down. His father didn’t do all that in order for Alex to feel guilty about it. I think it was a good addition to make Alex more sympathetic of a character.

Another thing was a detraction from the source. It wasn’t a big scene, but they did have some fun passing around Ei-chan’s notebooks to the various players in the stands so they could read about their weak points as described by Maruo. It was kind of funny seeing Pedro (his opponent last episode) wanting to read the notebook to find out what was written and needing to ask Atsushi for a translation.

I’m pretty sure it was in the source material somewhere, but they at the very least moved a scene into this episode with Ike having a flashback with Natsu. Making note that very rarely has that girl talked about someone becoming really strong in tennis. The first case was him and that made sense, but also Ei-chan. I think it was a fun scene though with him being pretty well the ultimate athlete. The guy could have gone professional at whatever he wanted to do, but thanks to Natsu decided to dedicate himself to tennis and got really involved in it. 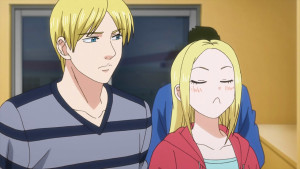 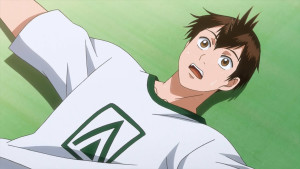 This was a really good episode and maybe one of my favourites for Baby Steps since its come back. This feels like the kind of Baby Steps I enjoy watching. The MC working hard to improve, some good tennis matches, and some character moments as well. A lot of characters got to grow or be better understood. Alex is now a much more understandable character, Ike even got fleshed out a bit, and Ei-chan continues down his path. The next episode should be fun and curious to see how this goes for both players.
Score: A