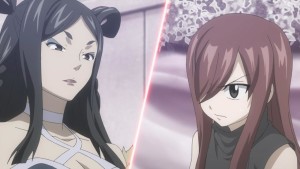 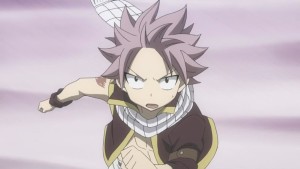 Man… what is this feeling? It feels like the good old days of watching and enjoying Fairy Tail on a weekly basis are back. Even on a week like this one, where the story is still in setup mode, everything feels enthralling and entertaining. If there was ever an argument to be made for “good things come to those who wait”, then this is series is it. Fairy Tail is back in top form, and its gotten back to the level where it feels distinctly like the first series, and I mean that in the best way possible.

Yes, I did notice the slight overuse of Flashbacks, particularly the one with Minerva, but it did feel like there was a place for them in the grand scheme of things this week. I’m willing to let the occasional padding slide every now and then, as long as its done in moderation like this. That and when an episode opens up in the funny way that it did, with Erza rolling off the ice hill, you can’t help but kick back and enjoy the ride XD 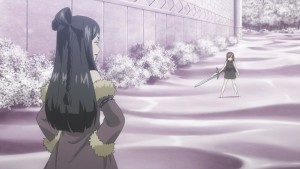 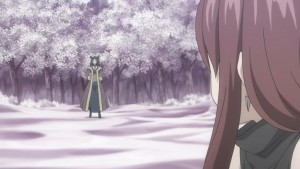 We finally got our big answer to why Erza turned chibi, but of course that answer lead to other questions. Its revealed that its Minvera’s partner that has the power to “Retrogress” people. The power is pretty OP too. As not only does it make the affected into a child version of themselves, but it pretty much decreases all their stats and overall power as well. And it doesn’t seem like its limited to one person at a time either, since both Erza and Natsu are in chibi form right now.

Speaking of Natsu, it seems like the roles have been swapped between him and Erza this episode. Erza ran smack dab into a fight with Minerva, who has quite the axe to grind. Erza’s got the odds against her in this battle, as it took quite a bit to take down Minerva the first time, and that was when Kagura was part of the battle. This time she’s in quite the powered down form, and Minerva’s probably gained some new sleazy tricks after joining Succubus Eye (still a weird name…). 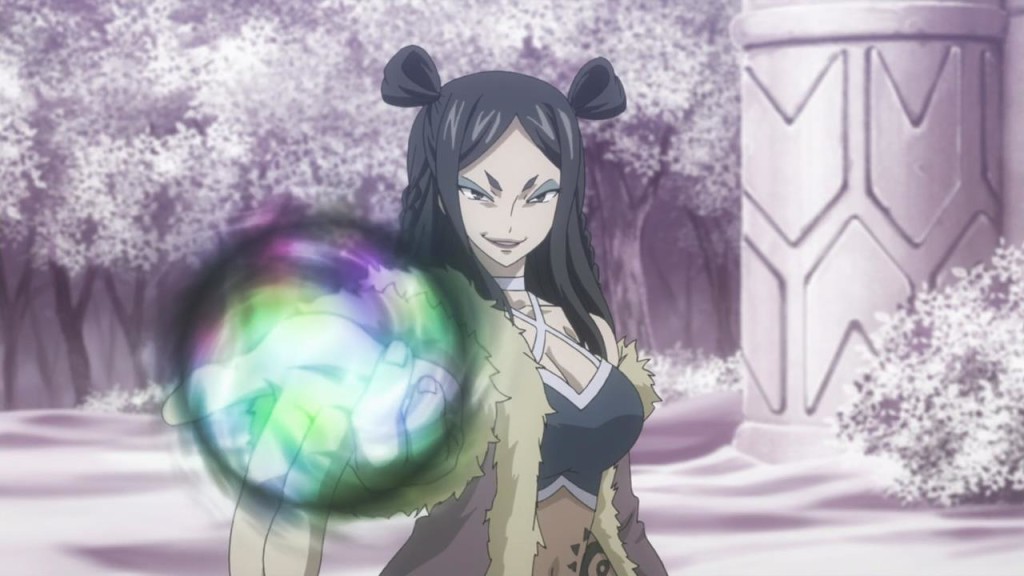 The one thing I didn’t buy was Erza being “worried” about Minerva. I mean… seriously? After all she did, the way she tortured and almost killed Kagura. On top of that the notion that Sabertooth would be worried about her doesn’t strike well with me either. Minerva and her dad were everything that I detested about Sabertooth, and them being gone is nothing but good as far as I’m concerned. I guess Mashima-sensei’s old habits of having the heroes care for/forgive the evil doers are coming back here, but for the first time in a while, it all feels so… out of place and wrong.

Regardless of how oddly nice Erza is being to Minerva, Minerva is out for blood. I’m quite excited to see how exactly Erza will make it out of this jam. There are no easy solutions to her current predicament, to say the least. While her Chibi form has powered her down, it must be said that Erza had some exceedingly funny lines this week because of it. 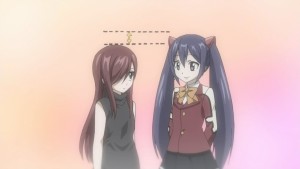 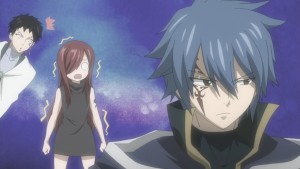 People take note, in Erza’s mind, Natsu and Gray would bully a Chibi Erza, Wendy would try to act like the bigger sister and most important of all… Jellal isn’t interested in little girls! XD The last part there is probably a good thing, Jellal’s got enough issues and a dark past, adding lolicon to that would certainly not help. 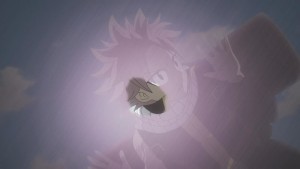 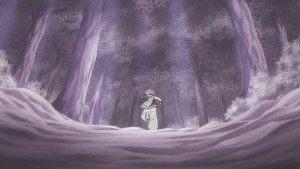 So while Erza takes on Minerva, Natsu is off hearing voices and trying to find the source of said voices. Or voice rather, but you get what I mean. On that note, it was kind of anticlimactic how the battle with the Treasure Hunting Trio ended, but I suppose there are bigger foes for Gray and Natsu to deal with. I liked the whole fact that everyone except Happy was able to catch the Moon Drip bottle, but I felt like the build up to Happy dropping the bottle was a bit… too slow. Regardless it was effective and pretty darn good humor. Two good jokes in one episode? Fairy Tail’s definitely got it back. 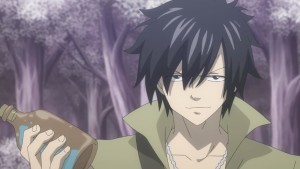 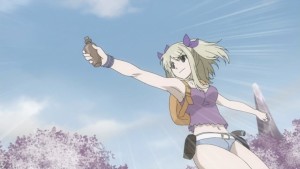 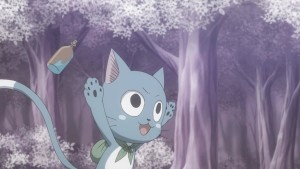 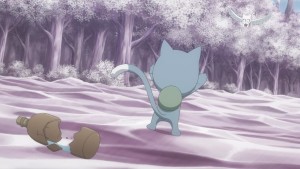 It was interesting that the Moon Drip led to another new plot point, namely Natsu hearing that familiar voice, going after it and dispersing everyone around him. It makes sense that everyone would get separated because well… Its a bunch of Fairy Tail Mages XD

Natsu went on to meet Minerva’s partner and get “Retrogressed”. Again, I have to say how overpowered that guy is. While it would’ve been cool to have a beat down happen there and then, I liked how Natsu just fooled him and gave him the slip instead. It was a bit odd of Natsu to run from a fight, but then again I suppose he’s got tunnel vision for that voice right now, and that opens up, other opportunities… 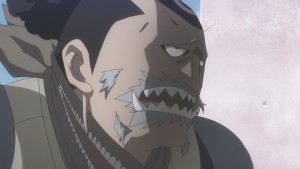 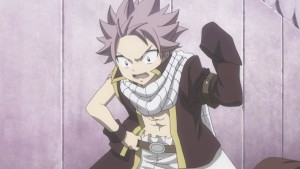 I’m sure a certain ice mage will be next to get chibi-ed, and will probably be the one to actually take on this guy, but we’ll see.

Everything else aside, I think the final moments of the episode were by far my favorite. Ignoring the silly cat disguise joke, things amped up when Wendy stood up to the Treasure Hunter Trio. And then Flare coming in and saving the day? That was cool. I’ll give her props, she might not be on my favorite characters list, but the woman knows how to make an entrance. And in classic Flare fashion, she just had to throw in “Kinpatsu” (blonde) in her whole “its three ladies now” statement. I also liked Crunchyroll’s translation for Wendy’s hair color “Aogami”, which was Bluenette. That should totally be a thing now, the definitive way to describe blue haired anime characters. 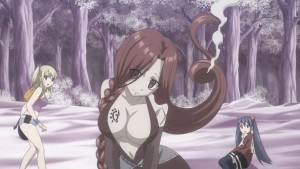 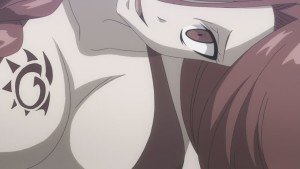 Also interesting to note was the mark on Flare’s left breast, which was a new guild mark? Its not one that I recognize, but I’m sure it’ll be addressed in a future episode (aka please don’t tell me if you know XD). Either its a new guild mark, or its related to the Sun Village that we’re in, given that it looks oddly sun like. Her mark aside, it’ll be interesting to see Flare, Wendy and Lucy team up. This is probably the moment where Mashima-sensei will work his magic and make me like Flare, and I welcome it, although a bit hesitantly.

So with that, the players on the board have shifted, as have their roles. I’m surprised at the quick shake up, but its definitely keeping things interesting. I have no idea where this story is going, and again, I mean that in a good way. I’m liking this arc so far, and the only reason I didn’t rate this episode higher is because it did feel like another setup episode. And yes, the overuse of flashbacks does worry me a bit, because that is a pretty slippery slope that I’d rather we not slide down. 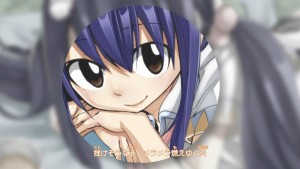 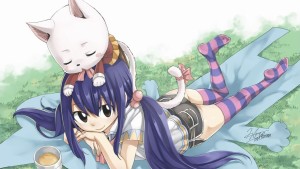 And hey! There’s always a cool Hiro Mashima illustration at the end of the episodes. This week’s featured Wendy and Carla and was pretty nice! 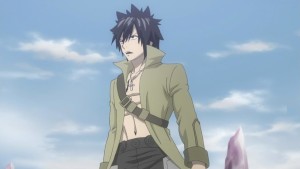 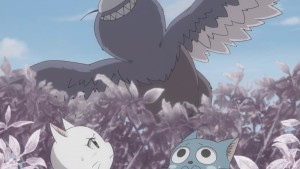 Seems like we’re getting some Gray focus next week. Its about time!