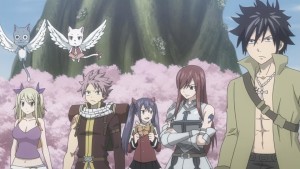 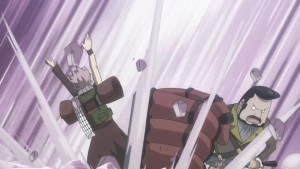 The mystery deepens this week, as our heroes deal with a new threat with an even bigger one looming in the background. I think its safe to say that Fairy Tail has gotten back to being interesting again, but I can’t help but worry when a shounen series starts recycling content and scenes from its previous episode.

I’ve got the same concerns with Toei Animations recent handling of World Trigger, and while they’re not as pronounced here, they still exist. Fact is we got the whole scene of Warrod explaining the whole Sun Village situation again, after we had seen it last episode. I just hope this doesn’t become a pattern, since we already have a previously on section in the series. 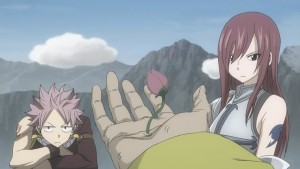 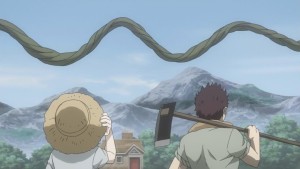 The only thing I can think of, is that these scenes were put in the episode to make it so that it ended at a certain point, and that the story didn’t feel too disjointed. I’m hoping that’s all it is, but I suppose time will tell if Fairy Tail is going to fall into the same delaying tactics that other shounen series have as of late.

Delaying tactics or not though, the episode was still pretty solid. I like how the lore of the series is expanding, first with Warrod, and now with the inclusion of other guilds besides the Mage guilds (both light and dark). This was our first look at a guild that does something else entirely; hunt treasure. 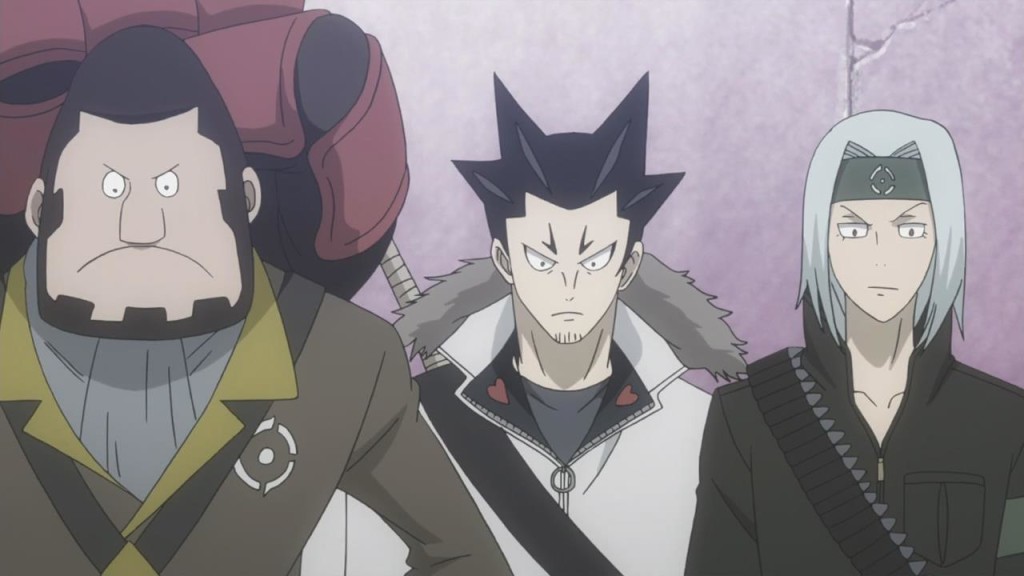 The trio of treasure hunters are definitely an interesting contrast to all the mages we’ve seen so far. Perhaps the biggest difference from Natsu and co is the fact that the three Hunters use weapons and items instead of their own abilities. And as is evident in the episode itself, they’re no push overs and their fighting styles utilize their weapons quite well. Plus they seem to work better as a team when compared to the current group of Fairy Tail. 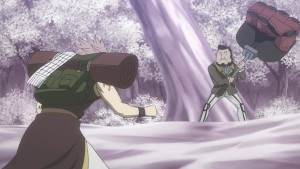 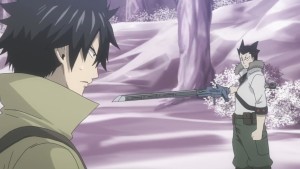 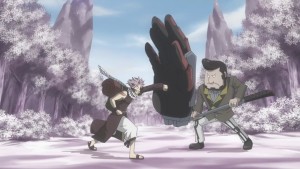 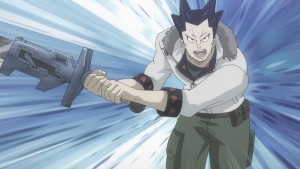 I think some of it has to do with the fact that Gray and Natsu just don’t go well together, but its also because our two main men just doesn’t fight with their head at the start of their battles. The Treasure Hunters are utilizing their weapons, and their environment in a pretty clever manner, where as Natsu and Gray are more or less just wailing at them with their magic attacks. I’m sure as the battle proceeds on these two will start using their heads, but for now this battle is pretty one sided.

More interesting was the clash between the sniper Treasure hunter Drake and Lucy’s Sagittarius. In terms of position, Drake has the advantage. he’s setup in a ideal place, where he can snipe everyone from, and is pretty hidden until Wendy detects him from his gunpowder smell. Already I feel like Wendy and Lucy are a better team, helping each other out in the best ways possible. 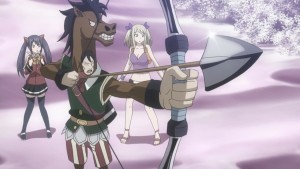 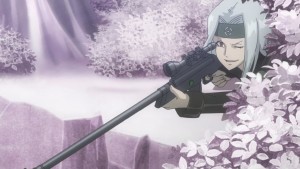 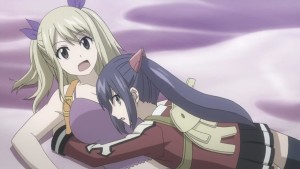 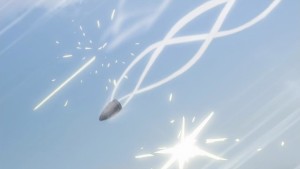 Of course, its worth noting that while Saggitarius is a good shot, Drake matches him pretty well with his rifle. Its darn amazing to see a sniper shoot an arrow down. Of course, Saggitarius one ups him soon after with three arrows hitting his bullets. I’m curious to see how this contest goes, and out of all the battles so far, this is definitely the most exciting one.

More than just contests of physical prowess, this episode had a good focus on some emotional moments and a pretty engaging mystery. I’m really digging the call backs to Gray’s past, and particularly what he’s lost. Given that two of the Ul family have pretty much given their life for him, I’d love to see him grow a bit more, if only in tribute to them. 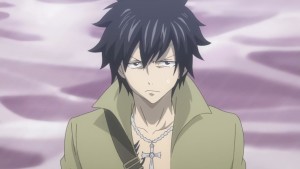 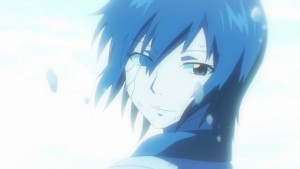 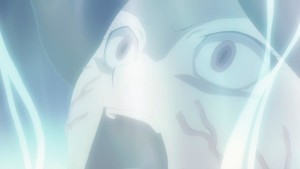 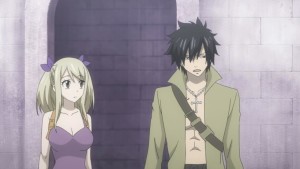 I’ve said it before, and I’ll say it again, Gray seems to be the most static character in terms of progression in the series, and unlike say Natsu, Gajeel, Laxus, Erza, Wendy or even Lucy, has not had many moments to shine and be badass. I’m really hoping this arc gives him a leg up, because otherwise he’s quickly becoming a B class Mage compared to nearly everyone else.

Speaking of Erza, I’m really glad we’re done with the whole “Erza is silly dumb” stuff. They were pretty grating in the fillers, and despite Carla’s little jab at Erza, I was glad to see her being the one to investigate and try to figure things out. If there’s a sort of leader to this group, its definitely Erza, and its good to see her be more than just the strong woman of the group. The discovering aspects of this story are definitely what Erza’s role is, for now. 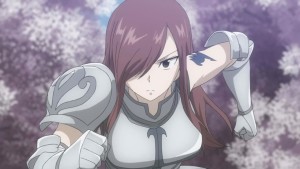 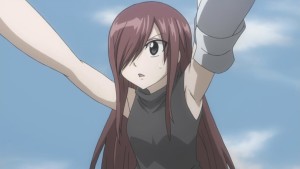 The fact that Erza went chibi is not only funny, but gives a real sense of danger to the story. I wonder if its more or less because of the fact that two Yami Guild Mages have appeared, one of them being none other than Minerva. Since the events of the Grand Magic games it seems she’s joined Succubus Eye (which is a terribly odd name by the way). 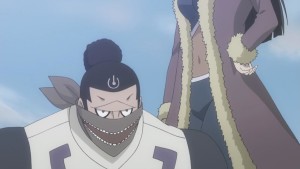 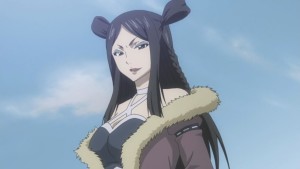 I’m sure that either her partner has the power to do it, or its some play on her own portal powers. Or… Hopefully it’s actually be tied to the mystery of the frozen village, which would be the best idea in my humble opinion.

The fact that Fairy Tail’s also introduced Giants to its world, is also a bit of a new thing. I can see the parallels to One Piece here. There’s a definite expansion of lore and some good world building happening with the new arc. We’re starting to see more of Fiore in the same way we got to see more of One Piece’s world after the Grand line. In Fairy Tail’s case, I really like the Fantasy angle of the series that sets it apart from the competition. Fairy Tail is so distinctly Japanese in the way it tackles everything that even its fantasy elements have a very distinct eastern look to them, mixed with the more traditional fantasy stuff. 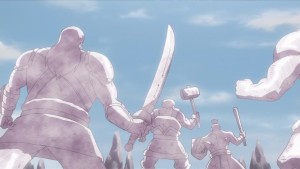 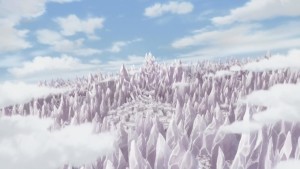 Its really impressive how Mashima-sensei is mixing Vikings,  Buddhist temples and more traditional european fantasy with a more contemporary Japanese video game, almost Monster Hunter Esque look to create something pretty distinct and original. And speaking of Hiro Mashima, it is a true treat to get an original artwork from him at the end of every episode since this arc started. It makes the rather simplistic animation in the ED themes bareable, and probably saves on budget costs as well. I can’t wait to get the bluray discs for this arc, if only to get the truly HQ versions of these illustrations. This week, for example, features leading lady Erza and is superb: 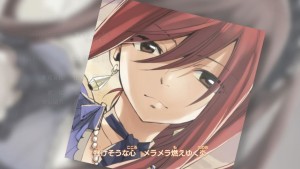 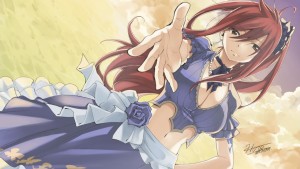 All in all, beyond the odd reuse of scenes from the last episode, Fairy Tail is trucking along, at a good pace. And MAN! It feels good to just be enjoying Fairy Tail each week. The one thing I will mention is that while the ED theme is nice, and even the mid episode interludes are cool and stylish, there are noticeable issues with the art and animation quality throughout the episode.

I know I’ve said that I’m kind of okay with it, but its still a bit distracting, especially given that everything else is going so well. I just wish the Anime Production staff would fix this one issue with their production, because I’d rather see the budget being put into the episodes themselves rather than a snazzy Mid Episode interlude.

In the grand scheme of things though, these are (at least for now) minor gripes. The fact that Fairy Tail is really fun to watch again, consistently week for week, is the true prize. 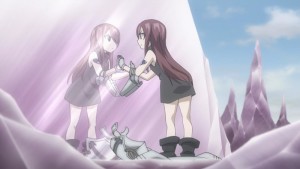 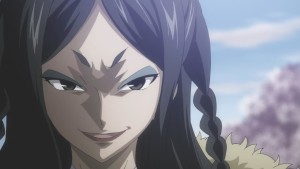 Next week, titled “The Law of Regression” seems to focus Minerva and her new cohort a lot more heavily. See you all in a few days!