After walking around the outskirts of the android Isla’s inner world in the previous episode, this one focuses on different things – particularly introducing us to the way Tsukasa’s co-workers interact with each other. For me it made an unexpectedly interesting episode – I was not expecting that angle to come into the foreground, and when it did it was actually handled rather … quietly. Though it seems there is a lot more going on than meets the eye here. Yes, there was more development between Tsukasa and Isla, but other members of the office got more focus and/or introductions. The end result was pretty effective as a whole, and serves as an unexpected set of different perceptions of Isla herself. 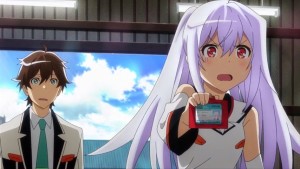 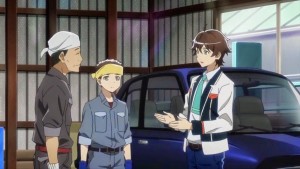 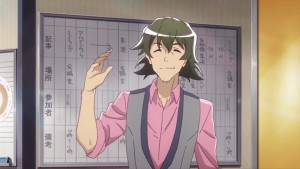 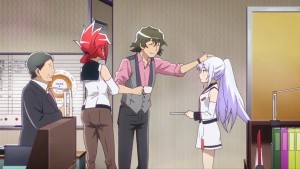 Of the characters introduced in this episode the one who probably has the biggest impact would be Yatsutaka. He, like Isla’s old partner Kazuki, has been working at the office here for almost ten years, and is a very easy-going sort who has a shrewd streak underneath the surface (as hinted at in the last few minutes of the episode proper). His Giftia partner was introduced last episode as well – the short and black haired serious, business-like personality Sherry, and in this episode it is shown that she is (perhaps necessarily) rather strict with him, and perhaps the only one in the office that he can’t … erm … manoeuvre around. Yatsutaka’s interactions with the others the office are interesting as well. Kazuki is aggressive and impatient with him (unsurprisingly – though he does not seem to be intimidated by her) while Michiru (the 17 year old redhead from the previous episode) seems wary around him. But interestingly towards Isla he shows gentleness and kindness – and Isla’s reactions to him are a bit more accepting, I guess? 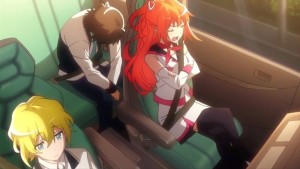 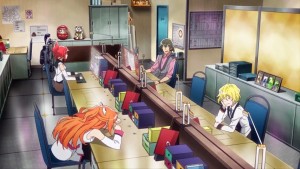 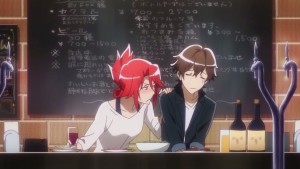 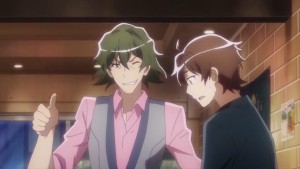 We are also shown a few interesting hints regarding Kazuki and Isla’s old relationship. We have seen in the previous episode that when questions of Isla arise Kazuki is exceedingly protective and perhaps even aggressive. After another failed initial contact attempt in retrieving a Giftia (partly because of Isla’s freezing up and getting cold feet again – the same way she did in the previous episode at the front door of her clients’ during the second retrieval), Kazuki takes out Tsukasa to talk with him about Isla a little and perhaps try to commiserate with him a little? Kazuki knows full well that Isla is the one who is likely messing the retrievals up in the field rather than Tsukasa – unlike Michiru, who ridicules Tsukasa in a really nasty way after the recent retrieval failure, assuming it was “his fault”. It seems that the job at Terminal services is one that weighs on Kazuki heavily – it is painful for her, and yet she sees no way out and often makes her way (as does Yatsutaka, interestingly) to the pun to drink and unwind from the stress of her job. I have a suspicion, however, that Kazuki’s perceptions of what she does at Terminal Services may have been influenced quite a bit by Isla herself and her worries and reflections about the nature of her work, perceptions that Kazuki cannot “un-see” but can do nothing about. 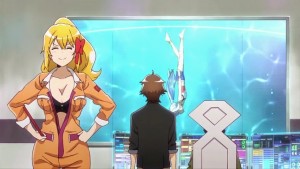 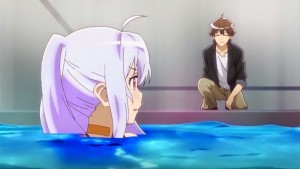 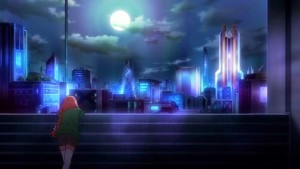 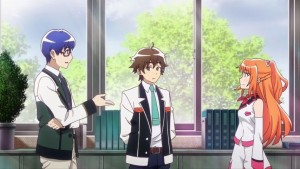 We also discover something else about Isla, and in the process we meet another set of workers in the Terminal services department – the in-house engineers Eru and Mikijuro. Isla has apparently been going to the engineer lab and “training” in the engineer section via swimming and underwater activities to improve her physical capabilities – the moments of her clumsiness, it turns out, were not just “for comedic effect”, she apparently is physically “rusty” after not being out in the field for so long. As far as I could tell she has been touched by Tsukasa’s kindness and covering for her and wants to be of more use to him. In her conversations with him after one of her sessions I found myself wondering whether or no her pairing with Kazuki previuosly were not a rather difficult one for her? Especially when she says things like “if you want out of this pairing, then I can’t stop you…” with a pained and uneasy look in her eyes. Tsukasa, however, shows himself to be a pretty good guy in his interactions with Isla, and treats her with gentleness, care and respect. 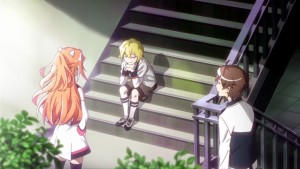 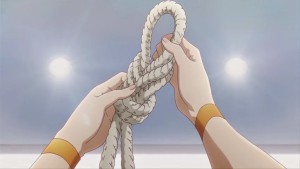 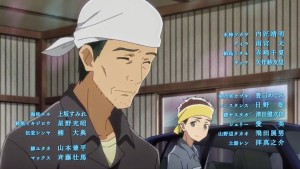 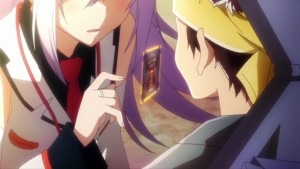 Even with these things, though, the episode itself ends with an unexpected gut punch – although some viewers made have had suspicions up to now, it is confirmed that Isla only has a little less than three months in her life-span, and that that is part of the main reason she is physically declining. Both Kazuki and Yatsutaka know this … but it has not yet clicked in Tsukasa’s mind. We also get foreshadowings of other ominous facts – we are informed that the Terminal services office Tsukasa works at is the only one that strives to treat both Giftia and humans as if they have a soul during the retrieval process (apparently it is a direct result of Kazuki’s efforts) and for some reason the SAI executives actively dislike the fact they do so.

Yet even with the confirmation of Isla’s lifespan ending soon, there were a lot of “positive” things the came about in the episode . One of them was Michiru understanding that she had been unnecessarily harsh and critical of Tsukasa and even apologizing to him. Another was seeing Tsukasa and Isla’s relationship as a team and as individuals begin to blossom. I found myself smiling inside for Isla, and somewhere can’t help but feel happy for her to be unexpectedly able to be shown such kindness and understanding, even if at the very end of her existence.

P.S. Extra thanks to Guardian Enzo at the lostinanime blog for providing a fair number of the screenshots for this post. ^^