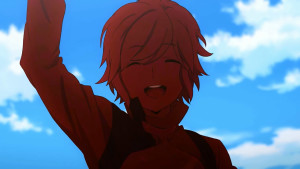 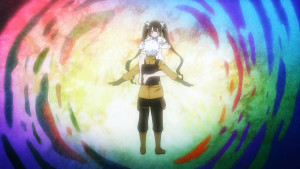 A new season begins. This really is one of the most fun times for anime watching . Getting to sift through all the new shows trying to find some surprises while also watching the shows you expected to really enjoy. I’ll say upfront that I don’t expect to be blogging this weekly, but I did enjoy it enough to want to throw out a First Look post and let people know this is something worth giving a watch.

Of course another honest point is that this is certainly going to be another harem show, so that may already eliminate a lot of people. While I’m not the biggest fan of harems in general, I can enjoy some of them so that’s not a huge deal for me. So with that being said, let’s actually talk about the episode itself. 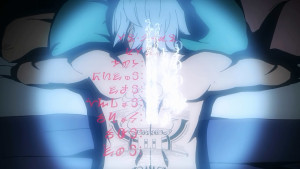 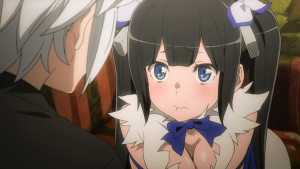 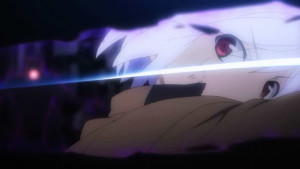 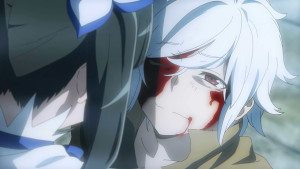 The one fun thing I enjoyed most about this episode is how it really has an RPG fantasy feel to it. They just pull so many RPG elements from drops, dungeons (obviously), stat upgrades, and leveling up. They make it work not because they are trapped in a game (thankfully we aren’t going there again), but instead having goddesses of that world act to level up adventurers. The adventurers go off to fight, come back, and their experiences are turned into actual stat upgrades. That’s a pretty good system. Plus then it makes sense why adventurers are in groups like that. It’s not only safer, but you need to join a familia so that goddess can update your stats. You can’t really go completely rogue without joining some familia along the way.

I just really enjoyed the atmosphere in the show. The dungeon was dark, the enemies were a mix of classic and more unique ones, and the action was good. You actually have blood (real, red blood) while the monsters also disintegrate after being defeated. It actually lets the combat have some weight to it when the adventurers and monsters are both taking injuries from these battles. We didn’t see any magic yet, but since there is magic I’m sure that will be something to look forward to. 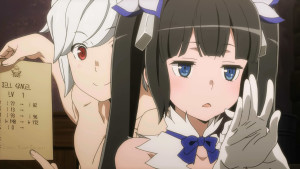 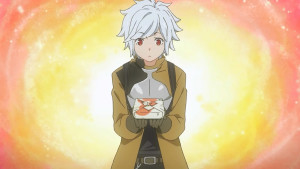 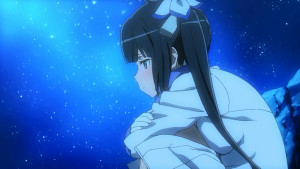 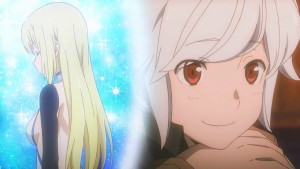 Bell as a lead seems ok, but he’s got room to grow. I didn’t immediately love this guy with the lovestruck goofiness for the girl that saved him or nearly getting himself killed like an idiot at the end. But I could balance that out with understanding it. He’s a young guy, that kind of goofy lovestruck state is not that ridiculous nor is how he reacted to what happened in the bar. That’s pretty normal for someone to get upset, frustrated, embarrassed and just run off. Sometimes people do stupid things when they are upset like Bell did here. He’s not a bad guy and is willing to put in the effort to get stronger and that’s not a bad thing.

At least in this early going Hestia is easily my favorite character of the bunch. I can respect someone that is so dedicated. She may struggle at times to be fully honest about her feelings, but in a sense she is still a heck of a lot more open than some characters. It’s just a bit of a tough road because Bell considers her more as family, since she is a goddess and he’s in her familia. Also pretty believable to be a bit upset about Bell being affected so much by some other girl and feeling like she isn’t able to do all that much for him. Despite the fact that she’s probably the only goddess with a mundane part-time job. So far she’s just a fun character and helps balance things out. Considering it’s a harem it’s a tough road ahead, but I’m sure she’ll be fine. 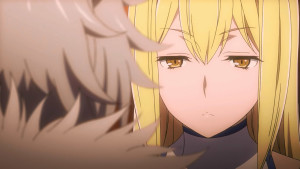 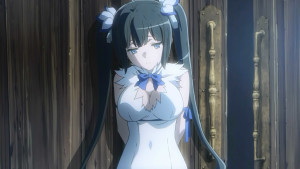 For a first episode I thought this was pretty good. It seems like the action will be good, the music seems good, and the characters have potential. Not much to say about the girl Bell is interested in other than she seems to be the stoic type that has more to her under the surface, but just isn’t that good at expressing herself. The jerk in the bar was well a pure jerk and you can only hope he’ll get shown up by Bell down the road. It looks good visually and I think it will be a fun show to watch on Fridays. Again I may not do another episode for this, but I did want to say it left a good first impression on me.
Score: A-