One of things about this series I have liked best is how many things it has going on under the surface – a surface so beautifully animated and with such striking, easy to “label” aspects (such as the food itself and the intense delight the characters show while eating) that it almost camouflages the serious elements of the story going on underneath. The series is based on a 4-koma manga as well, and from what I have heard the story was woven together and unpacked in meaning to a great degree, bringing about a result as effective as was done with the anime adaptation of Gochuumon wa Usagi Desu Ka, but with deeper character exploration and development. This last episode was an excellent stopping point to the series, which on the whole in my opinion was done extremely well. 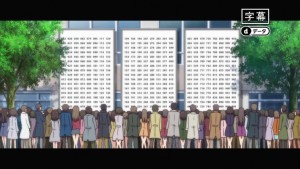 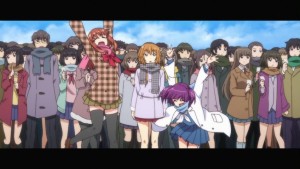 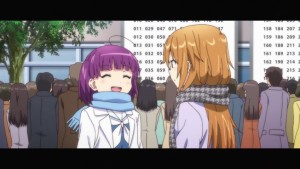 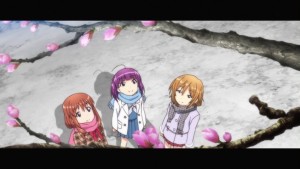 Following up on last week’s episode this one unveils the results of the high school exams Ryou and Kirin took (they both passed) and the next step in their lives – essentially Kirin is going to move to Tokyo to live with Ryou, and many of the elements of the episode focus on preparing for the move, the move itself and the aftermath thereof. Unsurprisingly one of the biggest elements present for Ryou is her memories of her grandmother, but there are characteristics of this episode that show Ryou is beginning to come to terms with her death and the dominant place they have had since the death proper. She seemed to me to be more resolved to live “in the present” by the time the episode ended, and part of it was, of course, her own growth and maturation. But another part was due to some far-sighted planning of her grandmother, interestingly. These plans were executed with great timing and with excellent results for Ryou, who was in a place where she could really “hear” the message her grandmother, who seemed to expect that she would be dying soon, set up in preparation for the future. 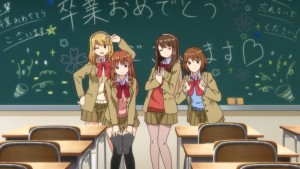 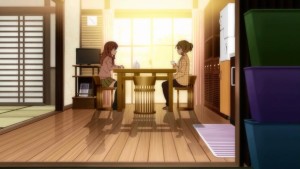 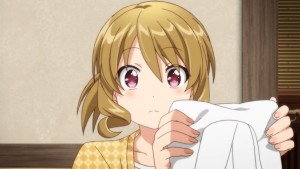 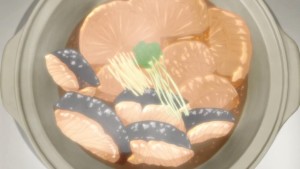 The focus of the food this episode was linked once again to Ryou’s grandmother – in particular the meal she prepared for Ryou when she was beginning Middle School. Ryou decides to prepare the same meal for Kirin as a congratulations for her passing exams and getting into high school, and for that to be the very first meal she will cook wearing the apron her grandmother gave to her aunt for her Middle School graduation present (humorously a gift which Akira admits to have had the dickens of a time finding again in her messy apartment). Here again after Kirin arrives the importance for Ryou of cooking for another person, as an expression of love that is very practical, comes out, as Ryou muses aloud to herself. Right after the meal, though, Ryou discovers that arrangements had been made for Kirin to move in with Ryou ahead of time (Akira did all the paperwork), and everyone seemed to know that this was taking place that very day … except Ryou herself. This lack of being informed by anyone unsurprisingly does not go over well at first. ^^ 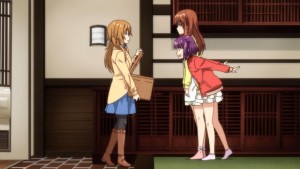 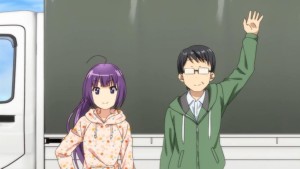 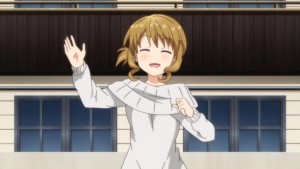 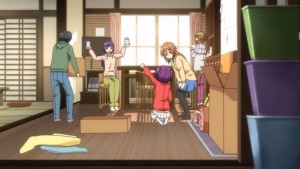 If there were one external element that really comes across on this episode it was how thoroughly Ryou is surrounded by her newly found friends and family. Perhaps it was always like this and she was unable to really notice it or even have a conscious context for realizing the ramifications of it if it was there, but whatever it was like before Kirin and her parents, Ryou’s aunt Akira (who interestingly seems to have been present a little more than first glance and according to her own evaluations of her activity), Shiina (and Tsuyuko by extension), the friends from Ryou”s middle school who also passed the exams to get into the same high school she and Kirin are attending and even the downstairs neighbor Yuki (shown in a cameo moment early in the episode being called a “sensei” by another staff member outside the high school Ryou and Kirin will be attending) – most of these people are people (with the possible exception of aunt Akira) Ryou feels much closer to now on a personal level. And this closeness shows small changes in Ryou’s behavior, including the fact that she got outright annoyed (not quite angry, perhaps) in this episode, so much so that both Akira and Kirin were scared and hastily apologized! Kinda makes you wonder if they have seen Ryou angry before and we have not? 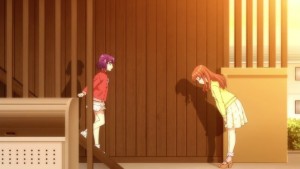 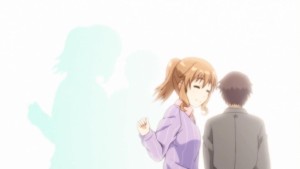 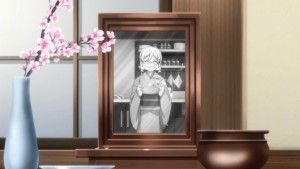 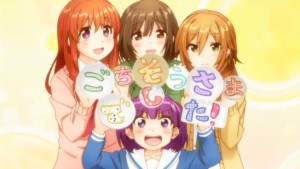 There is still the final assessment review of the season as a whole to complete, but for now I will mention that I thought this was an excellent wrap up episode. The series as a whole had the feeling of a mini arc in a 2 cour series being concluded, yes, but also building the ground for a lot more storytelling later on. So much of this series seems to me to have been a love of labor, something similar to Madhouse’s similar love of labor from this season in Death Parade – two series of extremely different content but (together with Akatsuki no Yona) all held the top position of series I was most interested and engaged in. I will be shocked if this series ever gets another season, but I can claim that the shock would be one of delight. I would love to follow How Ryou and Kirin and the other characters grow and develop from hereon out, but what we have been given was something very nicely done indeed.