There are some series that are just hard to put into words. The profound effect they have on you, the way they move you, its just something magical. For me, Shigatsu wa Kimi no Usou (Your Lie In April) is that kind of series, the kind of series that is just “emotionally resonant” and “powerful”. Its what I look for in the best of my entertainment; Something that incites such a personal and powerful emotional response that it drives me to tears. What’s interesting though, is that while Shigatsu wa Kimi no Usou resonates so much with me personally, its not the perfect series that appeals to everyone.

Like true art, different people have different reactions to it. This is a series that’s not trying to appeal to everyone, and in fact its got a very specific world view, one that may even offend some. There are two general reactions to this series, you either hate it or you love it, for a myriad of reasons, each depend on your own life experiences and your own opinions on things like stress, music, love and tragedy. 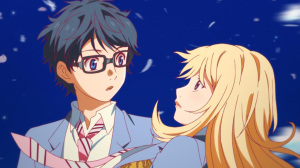 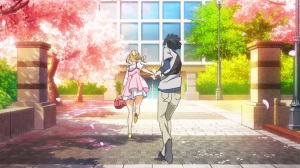 Shigatsu wa Kimi no Usou is a love story at its heart, one that features a Middle schooler Kousei Arima as he falls in love with a girl that’s in love with his best friend. Kousei is also a pianst, or at least was, as past childhood trauma has rendered him unable to hear sounds as he plays the piano. The girl he falls for is named Kaori, and she’s a violinist. As he gets to know Kaori, Kousei is almost forcefully brought back into the world of music and has to confront many of his own traumas, issues and pain in order to move forward.

One thing that’s worth pointing out from the get go, is that while the series is a powerful one, the emotions you feel are rarely positive or happy. There’s a lot of pain and strife that the characters encounter, and some of it is pretty tough to watch. The story is fulled with unrequited feelings and tough situations, sometimes unfairly so, if you consider that these are Middle School kids going through all this. 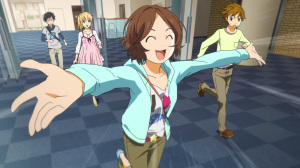 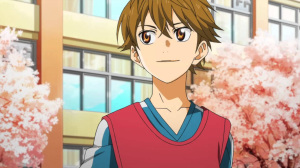 Yet, what’s most mesmerizing is how realistically these characters react. They don’t react perfectly but neither are they jerks. Every character in this show is doing their best, and are just likeable people. Having a cast of characters that’s full of human people, people who have flaws and weird quirks and do stupid things, but have the best of intentions, is great to see. Its endearing to watch, and it really amps up the emotions and tears when things happen.

You can argue that Shigatsu wa Kimi no Usou is a manipulative show, one that constantly creates situations that will play with your emotions, but again, this really depends on who you are. Myself? I find the skill with which this show draws out my emotions to be impressive, genius even. I can totally see what the show is doing, and appreciate the skill with which it pulls it off. 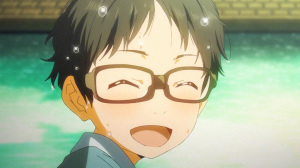 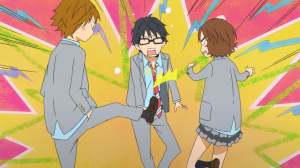 And I think a big factor in why this series is so powerful is because of how well the Art, Animation, Music and Voice acting work in tandem. It really is the beautiful marriage of everything that makes up the anime medium, that makes this series something truly special, and elevates it to an art form.

Of course, it would be remiss of me to not mention that Shigatsu wa Kimi no Usou does have some growing pains in the start. There’s a weird slapstick comedy element to the series, one that offended a good deal of the anime watching crowd online. It gradually dissipates, but it can be grating and out of place for some. There’s also the odd issue of how deeply philosophical and intellectually contemplative these Middle school kids can be. It requires some suspension of disbelief for some, while others like myself will be able to relate quite well to it. 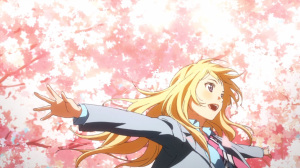 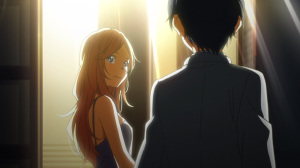 I think a good way to boil down the essence of the series is by looking closely at its main heroine, Kaori Miyazono. Kaori is never what she seems, and its the unraveling of who she is and what she’s actually feeling that is the big event that the series develops towards. Her first impression isn’t all that great, and its hard to see why the series and its main character are viewing her as some angelic girl. Its not until the last episode that you truly realize what’s going on in her head and how her awkward behavior makes a lot of sense, given context.

She’s confusing, vexing, frustrating, and yet Kousei can’t seem to stay away, and can’t help but be effected positively by her. I’m sure some of us can relate to that, if nothing else. 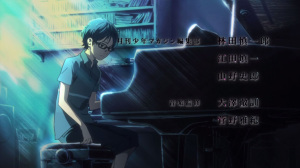 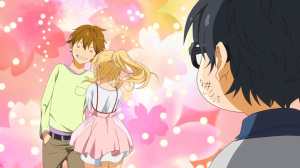 And while I mentioned already that the production of this show is pretty good, I think its worth giving props to how beautiful this series looks. What truly makes this such an impressive visual feast though, is the fact that it beautifully illustrates music and the abstract sense of feeling that’s generated because of it. The visual imagery is like a painting coming to life, and its something that only artistic series like this can pull off. Series like True Tears have done this before, even Glasslip, but what makes this show stand a cut above the rest, is in how it has a story with heart that is backed up by the beautiful visuals. Great work by director Kyohei Ishiguro and A1 Pictures for the production.

And speaking of production, the voice work! Oh man! Its hard not to give props to Risa Taneda (Kaori) and Natsuki Hanae (Kousei) for carrying the weight of the story with their stellar performances, but the work that Ayane Sakura and Ryouta Osaka do as Tsubaki and Watari is just as good. Its these voice actors that bring life to the main characters, and then there’s the all secondary characters as well. Its just another piece that makes up the great whole that is this series. 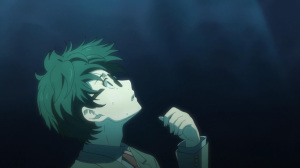 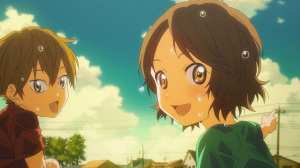 Finally the music work on this series is stellar. Sound Director Aketagawa Jin does an amazing job. A series about music definitely needs good music direction, and rarely does the music direction disappoint. The Two OP and ED themes are beautiful as well, both from a music standpoint and an artistic stand point as well. Like everything else, its hard not to love the stellar sound work of the series.

And at the end of it all, I’m not really sure how to review a series like this. I think I’ve outlined how I felt about this series, but it really was the personal connection I had with the series that made it so amazing for me. You might not have that connection, you might find the way this series deals with issues of trauma and pain to be offensive, and unfortunately this one of this series that you have to watch to really find out. Will you like Shigatsu wa Kimi no Uso or hate it? I’m not sure. 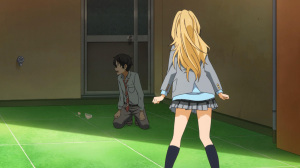 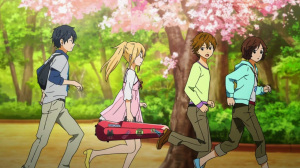 What I do know is that I loved it, and for me, this bittersweet coming of age love story, is one of the best things to come out of the Fall 2014 Anime Season. That said, I am aware of the fact that this isn’t a perfect series, and in light of that, the final grade I award to this series is an A Grade. And in the end, I implore you to check this series out, and see how you react to it. You never know, you could fall in love with it like I did, and that’s possibly the best outcome that anyone could hope for!