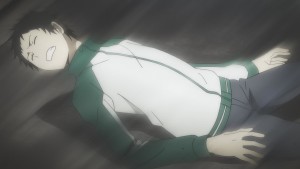 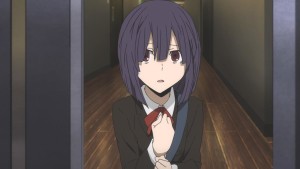 Durarara!!x2 is at a rather odd point, both in terms of plot, but also in terms of episode count. We’re 11 episodes in now, one week from the first season’s finale, and things seems very much like they’re just getting started.

In many ways this second series needed to have one thing; more of what was present in the first season. To some extent, that is definitely true, however… Even at its best moments, Durarara!!x2 Shou, rarely reaches the levels of the first series. There’s something definitely missing, something that’s preventing this series from really getting exciting and riveting. And this is despite the fact that it has some really interesting characters, an intriguing plot and even the same production staff that worked the first series. 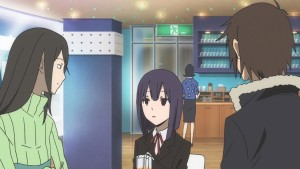 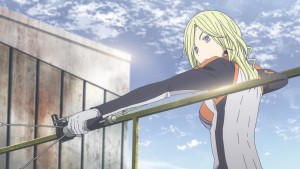 What is that something? I’ve been pondering the answer to this question since I started the series, all the way up to the current episode. I believe it was around episode 5, when things started to pick up a bit, before plateauing again. Perhaps the first season was just unique, a one off event that rarely occurs in the anime landscape. Maybe it’s simply the fact that Durarara!!x2 starts in such an odd place, and then continues into a storyline that might not be the strongest offering from a franchise that’s provided tons of wonder and entertainment.

Whatever the case, the one thing I’m definitely sure this series is missing is the tight pacing of the first series. The most magnificent element of Durarara!! was that it really did feel like each episode was a substantial chunk of the overall story.

It felt complete, a satisfying meal that you had each week, and then the wait began for the next because of how good it was. A smaller story would end, and then the next big thing would get some setup, with an overarching mystery continuing to build. That, and Durarara!! didn’t throw any big pressing matters to the wayside, rather it confronted each big issue quickly, before throwing in the next tantalizing situation.

This season of Durarara!! has done the exact opposite. In some ways, its almost like the story is holding off the best moments for later, whenever that later is. The whole issue of Izaya and what his big plan is, why he has Celty’s head e.t.c, has hardly even been touched upon yet. 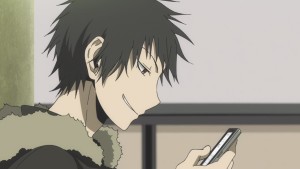 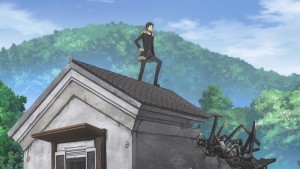 In fact, its kind of perplexing how so many major characters are pretty much doing nothing of consequence. Izaya’s a good example. Sure he’s manipulating people in the shadows, and doing something, but his presence is largely absent, and it feel like he’s off doing his own thing while the major events that take place in Ikebukuro happen.

Other major characters like Shizou and Kida feel really really underutilized. Kida is the worst off here, as is he has mostly spent the entire season outside of Ikebukuro, gathering the courage to actually come back and help out with whatever is happening. 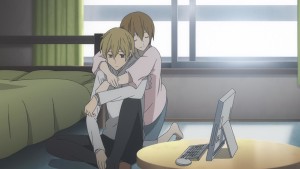 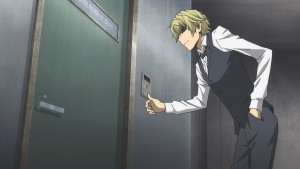 Shizou, on the other hand, is definitely a more integral part of what has happened thus far, but it definitely also feels like he’s an outlier rather than a key element in the story. He’s spent a majority of the last few episodes chasing after an Izaya that he’s obviously not going to find.

I’m not sure I’m a fan of just giving characters “Something to do” rather than actually using them properly. It almost seems like it might’ve been a good idea to give Shizou a break rather than use him like this. 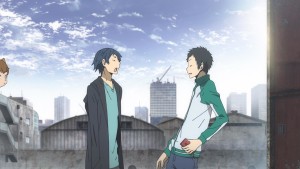 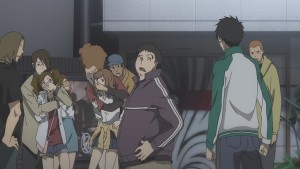 Finally, there’s Mikado and the whole issue with the Dollars, which seems to be one of the two central storylines of the season. I can say that I like the story as a concept, exploring how the whole philosophy of the dollars can backfire and what Mikado wants to do with the organization that he created. That coupled with the exploration of how “normal” Mikado is compared to his friends, is definitely interesting stuff. Again though, I felt like there wasn’t a sharp focus on this as there should’ve been.

The whole issue of Mikado and his issues with the Blue Squares for example, gets interrupted by Celty barging in. And then there’s Rukujo and his whole beef with the Dollars. 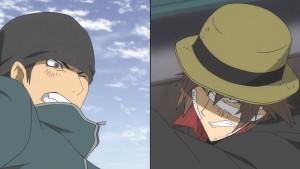 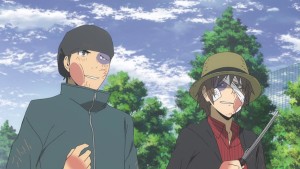 That whole part of the story seemed like it would make for a good little gang war, but he and Dakota pretty much expend that whole story by beating each other in an empty school ground, before becoming friends. The whole ending is kind of anticlimactic… Something that’s rare to see in Durarara!!

Speaking of anti-climactic, Lets go back to Mikado, for a second. He sees Anri pull out Saika and use it, RIGHT IN FRONT of him. Yet that whole thing is ignored, which makes no sense. 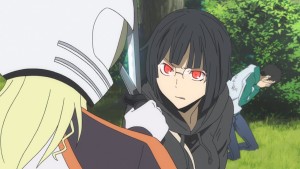 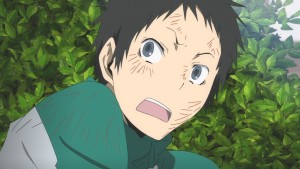 I feel like that whole part deserved some fanfare, some big reveal and some fallout based off of it. Yet its pretty much thrown to the wayside in favor of the second major storyline at that particular point.

The whole Akane, Yakuza storyline is the other piece of the puzzle that makes up this arc. Honestly, its not as endearing as I would’ve hoped. What’s unfortunate is that there’s two new interesting characters introduced, particularly Varona, yet she spends most of these 4 episodes tailing people rather than doing anything of note. 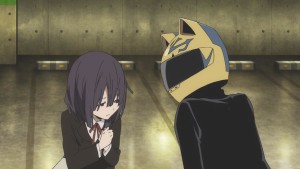 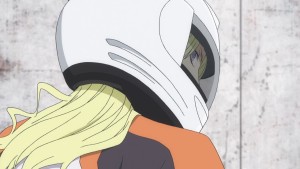 The whole conflict between her and Celty is definitely interesting, but its taken a backseat to everything else happening.

In many ways, while I like the idea of two ongoing conflicts happening in tandem, its problematic when both stories seem to get in each other’s way, rather than add to each other. Its perplexing, because we’re pretty much at the end of the first season, with the second one happening after a one season break, and I’m not sure how we’re going to end in a remotely interesting place with only one more episode. 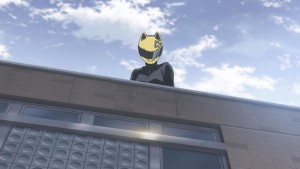 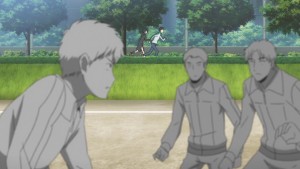 Speaking of endings, while I like Kabadi as much as the next guy (Its a sport I’m familiar with since I’m from Asia), but seriously… What kind of odd ending was that in episode 11? Really? Really?

At the end of it all, I’ll say that Durarara!!x2 isn’t bad, its really not. Its just not really really good, which is what I expected when I sat down to watch this show. Its just not firing all cylinders yet and I can say that that is a bit worrying about 11 episodes in.

I don’t hate the show, nor do I intend to stop watching or even blogging it, but I definitely feel a bit dissapointed with what I’ve seen so far. And its because of my rather high expectations for this series, that I think this post is coming off as a bit too hateful, even though I really don’t quite feel that way.

If anything, I’m sure the story will pick up as we get into the next season, because this season pretty much felt like setup and build up to whatever the real story will be.

One more episode to go. I’m really curious to see how this series ends before it takes the next season off. 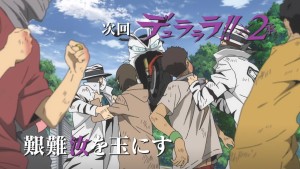 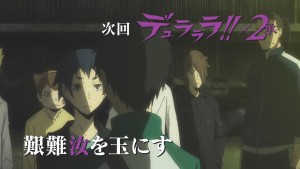 The last episode of the season. Seems Like its going to focus on the Dollars and Mikado before its all said and done.