This was a very interesting episode for me because it was the first time we have seen the “world” Ryou and Kirin inhabit together “spreading outwards” to include other similar souled people into their “circle” (other than Shiina, I mean). And it just so happened to be Ryou’s downstairs neighbor – the one who was ordering the pizza in episode 1 for those who may remember. Her name is Yuki (Crunchyroll translated her name as Yuuki, which seems to be incorrect based on the source material); she is the main focus of the episode proper, and definitely a fitting and “worthy” addition to the trio of friends. 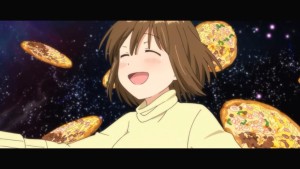 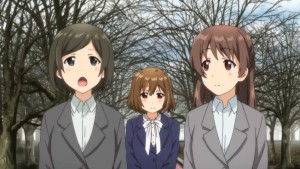 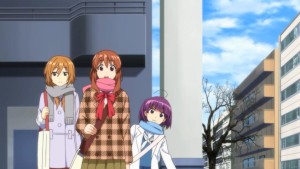 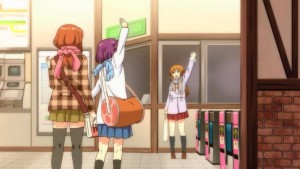 Before I forget. This is the first episode I have seen thus far in the series that really, seriously made me hungry. The food focus was, of course, pizza, and Yuki adores it. How she is able to keep her womanly figure after eating so much pizza for so long is beyond me, though. When we are first introduced to her we see that she is a painfully shy young lady who is going to university and is about to graduate, it seems, and her focus seems to be in education – though it is kind of hard for me to imagine someone as shy as her being a teacher. Towards the end of the ep she seems to be shown outside the high school Ryou and Kirin are taking exams to get into (and Kirin is positively nervous). If Kirin does pass that might mean she could stay with Ryou 24/7 while in high school. I guess I could see Yuki working as a librarian? (Hopefully it will not be as a lunchlady or a janitor.) 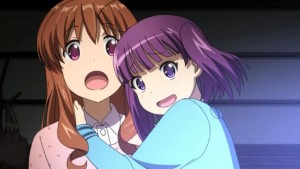 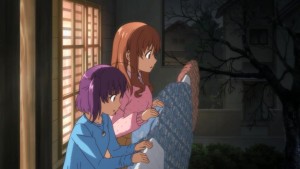 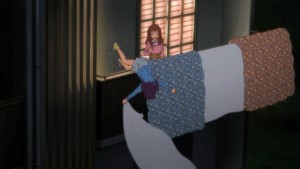 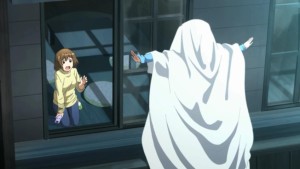 Another nice thing about Yuki as a character is the fact that she articulates something that we the viewers have been thinking for many episodes now. In this episode Kirin fails her agility/dexterity check big time and falls head first off the second floor balcony (see image above). However, she lands on the railing surrounding the first floor balcony below on her feet like a cat, much to Yuki (and the viewer’s) surprise. Yuki then thinks to herself something like “This person has incredible physical ability and talent.” Yes! Finally! Someone in the series also thinks the same thing! Even with this, though, Kirin’s falling off the balcony turned out to be the occasion for Yuki meeting her upstairs neighbor finally.

Oh yes, before I forget we also discover an odd fact about Ryou – apparently she does not mind horror movies. I don’t know why I was so surprised by this, but I was. 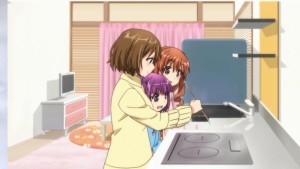 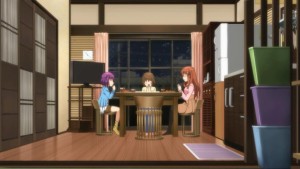 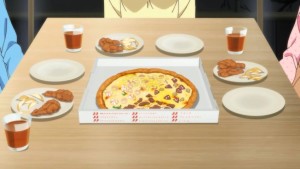 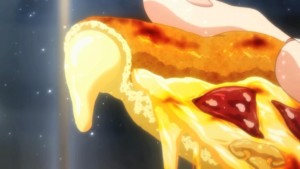 While they are all visiting with each other for the first time Yuki’s pizza arrives, and she offers to share it with her new acquaintances. And I must say that this is the most delicious depiction I have ever seen of pizza in anime, and possibly in any medium. I mean seriously – this looked incredibly tasty, and was yet another proof to me that the folks at Shaft studio are enjoying this adaptation waaaay too much (not that I am complaining, mind you). It really does seem to me that this series really is a labor of love in a way, possibly even a “pet project” of a group of people who really wanted to make it look beautiful. And in my opinion they have succeeded magnificently. And speaking of love we are given a glimpse towards the end of the episode that when it comes to how she eats pizza at least Yuki is cut from the same cloth as Ryou and Kirin. Her shyness vanishes and she … well … goes into ecstatic sparkly mode. 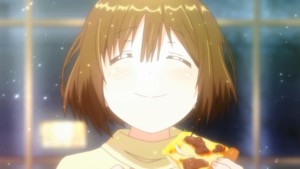 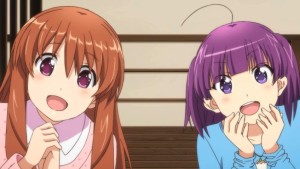 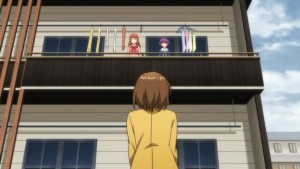 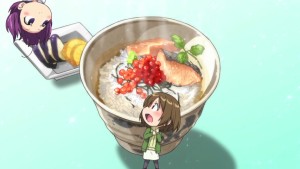 In many ways I must admit feeling glad for Yuki in this episode – she really comes across as a sweet, endearing and gentle soul. She is also exceedingly funny, being one of those sorts who have a very difficult time saying what they are thinking, even though they think lots of things, are pretty smart and also pretty observant. If for some reason Kirin is unable to make it into the same high school as Ryou and can still only come on weekends at least Ryou will have a neighbor she can spend some time with. If Kirin IS able to get into the same high school and stay at Ryou’s place, then the trio (occasionally made more delightful with Shiina’s visits) could even become more interesting.

With that, though, we have only two eps left in the series. I am still expecting the possibillity of some kind of conflict between Ryou and Kirin and their getting closer as a result of reconciliation and possibly even both growing and maturing some, but it is hard to say at the moment. It would be great if this build up of sorts for the first year of high school with Yuki, Ryou and Kirin all in the same place is a distant hint to a second season, but … well … I am not crossing my fingers just yet! ^^

Oh yes – special thanks to Cherrie from randomcuriosity once again for the screenshots. It made writing up this post sooooo much quicker to complete!