As with some earlier episodes, this episode was a surprise as well – I was not expecting an episode that would both re-vist and re-assess the first episode, but moreso I was not expecting one to show up 3/4 of the way through the season. It makes me wonder why it chose to do so now? Is there some kind of unexpected twist that will take place in the last three episodes that will be a contrast to all that we have seen thus far? One new element that does seem to be incoming is that we may finally get to meet the lady that lives in the apartment below Ryou’s and who has been showing up almost every ep (in the first episodes she was the one ordering the pizza over the phone, for example, and in this ep she was apparently going on a trip somewhere – presumably to visit family members for New Years). Since we are speaking of New Year’s, that is the event around which the episode was focused. 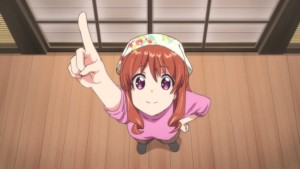 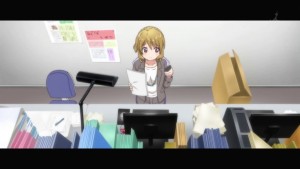 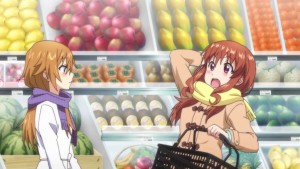 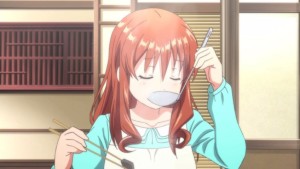 For those who may remember the first ep it was precisely on New Years day that Ryou first met Kirin, and Kirin caught a cold from the cold (dressing lightly because she thought “that is what young ladies in Tokyo do” or some such) necessitating Ryou to nurse her back to health … not that Ryou was particularly unwilling to do so. Kirin’s visit was a watershed for Ryou, as the former helped remind her of something she had forgotten – food tastes better when it is eaten with lose whom you love and for whom you cook out of love. Ryou had temporarily forgotten this in the aftermath of her grandmother’s death and as the months passed by with her living alone in her apartment. She lives alone, by the by, because her parents both work and travel doing so, though they send her money for her livelihood and  she is definitely not suffering any material wants or needs. Still, the old saw that “man shall not live by bread alone” especially is the case with Ryou, a very sensitive young girl with a lot of artistic talent in many fields and who was formed personality and tastes wise heavily by her grandmother, who is definitely “old school” in terms of Japanese society and culture. The result of all this is that the past year Ryou has been lonely (perhaps even dreadfully lonely). Someone might even be tempted to think at first that she was physically an orphan from the way she behaves and interacts with others. She has friends and classmates, but somehow there is a level of distance between her and them – an element not arises from ill will but possibly related to Ryou’s inner state. It is Kirin, of course, who almost single handedly serves as the catalyst to break her out of this, and the narrative that has gone on from the first ep until now illustrates this. 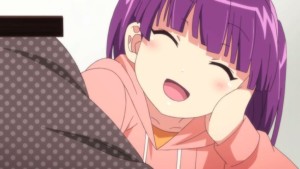 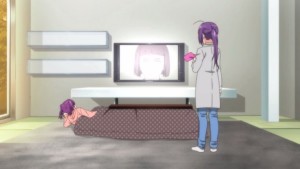 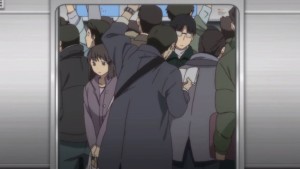 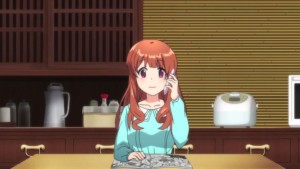 Of course Ryou is not the only one who has been affected – Kirin has too. In many ways Kirin and Ryou meeting one another was a happenstance that was ideal for both of. With Ryou this is easier to see – it is the main focus and emphasis through the episodes. Kirin has been heavily affected as well, though. And in some ways was also equally in need of a good influence like Ryou can offer. If Ryou was “forced” by circumstances to grow up too fast, to develop and mature parts of her personality to survive both externally and internally, Kirin has grown up in a very loving and fairly wholesome environment and may in some ways be a little too immature and has not grown up fast enough. Because of this, though, both Ryou and Kirin have strengths the other needs (and is shown benefiting from) as well as weaknesses the other’s example can point out. A classic example might be that while Ryou and Kirin are very close Ryou is a little too selfless and Kirin is a little too self-centered – again, not necessarily from conscious ill intent, but as a result of how they have grown up and who they are thus far, etc., etc. Kirin’s childlikeness, straightforwardness and simplicity (in the good sense) are exactly reflective of parts of Ryou that were skipped over while Ryou’s sensitivity and default to care and look out for others are equally reflective of parts of Kirin that she has not become aware of as lacking and not had an impetus to cultivate. 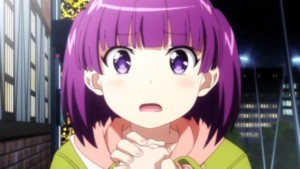 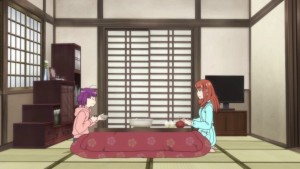 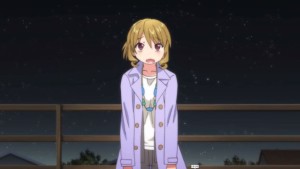 We see a little bit of Kirin’s “unthinking insensitivity” in this ep particularly with her enjoyment of the New Year’s television show and neglecting to think ahead and make sure of her arrangements to visit Ryou for New Year (even despite her mother hinting and encouraging her that it might be good to do so). When Kirin goes to the station and discovers there is no room in the train she was planning to take (because it is New Years eve – duh) she is disappointed, and tearfully calls Ryou to tell of her error, letting slip that at that moment she is sad she will miss out on the food Ryou made rather than missing out being with Ryou – something her mother fortunately catches her in the middle of saying and prevents her from completing before it is “too late” and her unthinking words cause unintentional hurt. Still, when Kirin arrives late and discovers that Ryou has been waiting for her arrival out in the cold she feels terrible and awful. Even so, later on her habits (again, not ill intentioned but just unthinking habits) interact with Ryou in a way that it comes across that she thinks of herself and her stomach first. I wonder if the last three eps Ryou and Kirin will clash somehow, and this clash will show each of them aspects they had been unable to see (or not wanted to see?) before now.

One nice element introduced in this episode is also the re-appearance of Ryou’s aunt, who shows up shortly past midnight and with whom Ryou and Kirin go and visit the local shrine. In many ways Ryou’s aunt reminds me of a “local example” or reflection or symbol of Ryou’s parents. She loves Ryou very deeply, but also is one of those who completely and totally immerses herself in her work. While I was glad to see she forced herself to show up I was kinda sad to see her decide to stay at the shrine and spend time drinking with her new acquaintances. Perhaps she wanted to let Kirin and Ryou spend more time together alone and be able to spend a little time with Ryou the next day after Kirin leaves? Still, the scene where Kirin and Ryou go to the amezake stand was a pretty encouraging one, particularly for Kirin and a teeny indication of her growing and maturing. The episode itself ends the next day with Kirin going back home. 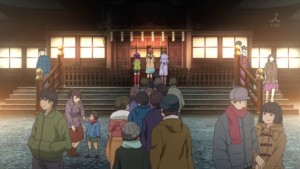 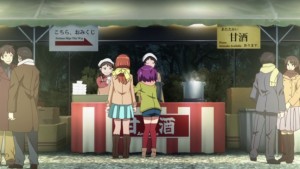 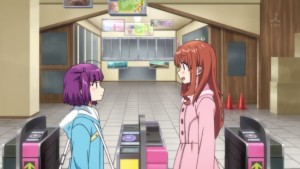 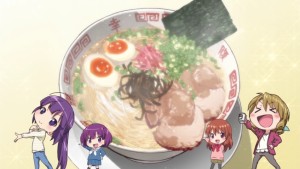 With the episode itself, though, the main impression I got of it after my first watch was one of … erratic narrative, for lack of a better way to say it. It felt that we had suddenly arrived at the New Year without all the steps in between that actually took place. It was very strong but also a little weird. Upon asking others about it I was informed that the anime adaptation has indeed skipped some of the chapters in the manga. Also, the manga is a monthly serialization, so the themes that are touched on naturally emphasize seasonal themes or national holidays and the like. So the weird feeling that I had actually had some basis in the source material. Speaking of the source material, I must admit that this is one of those series where I have been frustrated to not be able to read the source material. I would love to see the author slowly develop the relationship and growth of Kirin and Ryou more “fully”. I would not be surprised if the next few episodes focused more on an element of conflict to jumpstart and address a few things, though. We shall see!