In some ways it is episodes like this one that are the most difficult to write about, but not for the reasons that might immediately jump to mind or might be expected. In watching the episode and reading many people’s comments the strongest thing people carried away (unsurprisingly) was the more blatant than normal fanservice’y eating style Ryou and Kirin were shown doing first at the beginning of the episode and then about … oh … two thirds of the way through. And yes, they were both in the bath together, reinforcing the fanservice quotient. Perhaps it could also be argued that often eps 5 or 6 of a half cour series (like this one is) are often “breather episodes”, where the more serious elements take the back seat and stretch their legs for a bit. Or something.

But even with all that there this episode left behind a very faint, distant feeling that I have been having the dickens of a time trying to put in words for the past few days. And as a result the review was delayed and delayed and delayed. So I give it trying to encapsulate what the episode evoked in me and will rather try to describe the vague, dim feelings instead … maybe like one would become frustrated by trying to catch a half remembered melody heard at the tail end of upon waking up from a dream. 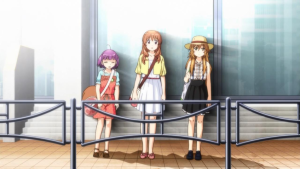 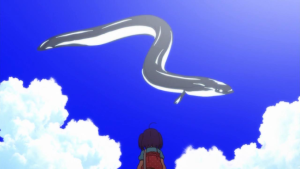 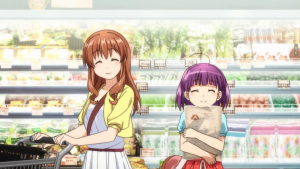 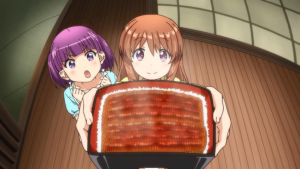 Of the sequence of the episode itself there is not much to say. It continues from last ep – it is summer time. Kirin is staying over at Ryou’s place uninterruptedly now, and they finished the lovely day spent at Shiina’s recently.

And now? Now they are all roasting – being vigorously baked by the summer heat.

What to do? Cool down, of course, and aside from the contemporary consolations of Air Conditioning or what not for Ryou and Kirin especially the way to cool down is to eat delicious food. Especially eel for some reason. So off to the store to purchase supplies and back to the house to devour Ryou’s cooking! Of course this is also an opportunity for more lavish animation of food by Shaft (they really are having way too much fun with this series, it seems). 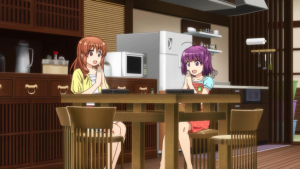 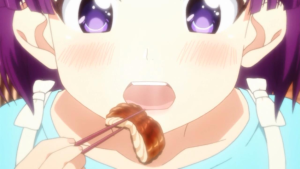 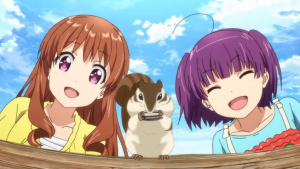 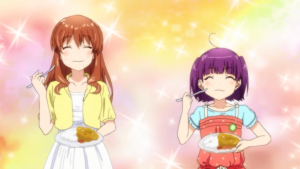 Kirin appetite begins to show signs of malaise, though – she wants “something to round the meal off”, but does not know what. So in between her attempts to cool down somehow (this is where the bath comes in and the decision to eat ice cream in the bath together, mind you) Kirin suggests various random things throughout the rest of the ep. Ryou bravely tries to follow along with Kirin’s voracious and wide-ranging appetite, only to discover that she is no match for Kirin’s stomach, which is apparently made of titanium or some such invulnerable metal, and can hold immense quantities and most any bizarre mismatch of foods that would make most people immediately sick.

But it is in the midst of all this that we are given the momentary flashback of Ryou and her beloved grandmother. Ryou mentions that her grandmother did not like Air Conditioning, and during the summer to cool down she would only use fans – whether electrical or hand fans – and cool foods. (She would also burn insect repellent incense in the house as well.) As Ryou recounts this we see her as a child with her grandmother fanning her as she eats and Ryou sleeping on her lap. 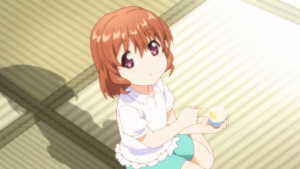 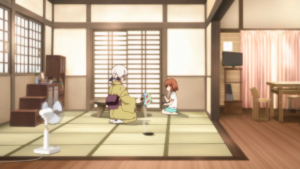 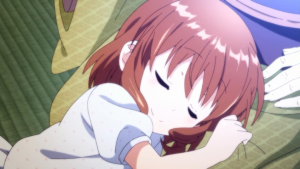 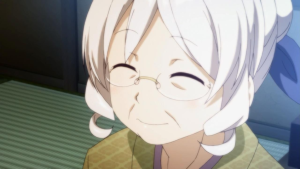 It is precisely HERE that I became aware of that “something” that I have had such a terrible time trying to describe – a “something” that I feel was easy to miss due to the silliness, humor and the stronger fanservice’y elements of the episode. It felt as if there was a brief moment where we saw the calm stillness that was at the same time full of love and radiated safety, security and contentment all at the same time – the hot stillness of summer evenings, the cool breeze in the night’s silence broken only by the occasional ringing of the glass chime, the kindness and care of Ryou’s grandmother … all this gave a “something” to Ryou’s soul that was part of a larger cumulative “living transmission of experience”, as it were, and which, for better or worse, formed her so strongly that she is very obviously “different” from many of her peers on an internal level.

And when I realized this I saw that the reason why it hit me so strongly was because the main melody of the episode was in showing the audience the great ball of restless energy that Kirin is and how it was shooting off in random directions here and there when she was physically oppressed by the heat. I wonder how many of us are cast in the same mold internally as Kirin as opposed to Ryou in our daily responses to things? And I wonder whether the purpose of the ep was to (once again) point to a … err … “mode of life”, of thinking about or feeling or experiencing things that is different? 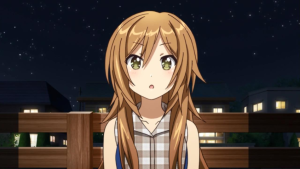 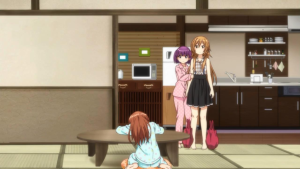 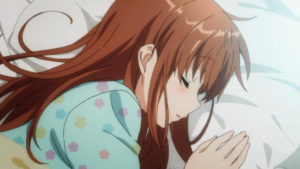 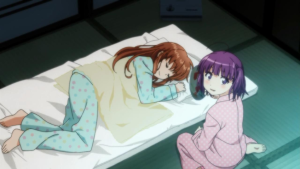 With these thoughts and impressions in my mind how the episode ended was very telling for me. Ryou is unable to keep up with Kirin’s pace and physically gets a bit exhausted and sick from eating the strange combination of food, and falls asleep at the table (to the surprise of both Kirin and Shiina, who decided to stop by in the evening for a surprise visit and tried some anmitsu before going home … to the distress of her digestive tract as well). Kirin brings Ryou to her bed and after a little while we see her silently fanning the sleeping Ryou when she hears the distant ringing of the summertime glass bell and realizes that the night is very quiet and peaceful … and catches a glimpse of what Ryou was hinting at in her descriptions of her grandmother’s care for her during the sultry summer evenings when she was a child.

Oh yes. Before I forget – thanks to Cherrie from randomc once again for the screenshots. RL has decided to practice it’s aikido throws on me this past week and I am … let’s just say I am no longer a spring chicken.