For every viewer and follower of any art form there are pieces or works that have spoken to them strongly and helped to solidify their interest in the medium, and anime is no exception. For me one of the most endearing and moving series that has done precisely this are the OVA’s and two seasons of the Tamayura franchise – for whatever reasons the series has spoken to me on a deep level and helped confirm my love of the anime art form proper. Therefore it should come as no surprise that any news of future seasons of the franchise should interest me greatly. Few series have ever been produced that could stand in the same room side by side with series like the Aria franchise, but the Tamayura series (and perhaps Skektchbook: Many Colors) is certainly one of them.

Last August there appeared a news item regarding the “third season” of the Tamayura franchise on the animenewsnetwork website announcing the conclusion of the series proper through four movies. The text of the information ran thus:

“The staff of the Tamayura anime project announced at the Tamayura Matsuri event on Sunday that production on a series of four anime films have been green-lit. The films will complete the story of Tamayura, and will revolve around Fū and her friends in the final year before they graduate high school. The first film will open in Japanese theaters in spring 2015. The official website for the franchise had hinted in June that an important announcement would be made at the event. The Tamayura anime project with an original concept by director Junichi Sato (Sailor Moon, Princess Tutu) premiered in 2010 with a series of original video animation (OVA) volumes. The project then spawned a television anime series titled Tamayura – Hitotose in 2011, with a second season titled Tamayura – More Aggressive airing last year.”

As a Tamayura fan I was very excited to hear about this and kept my eyes out for more information as the months went by. Finally on December 17th we got some further announcements regarding the official title of the movies, and the interesting information that starting in the Winter 2014-5 anime season Tokyo MX would be re-airing a selection of episodes from both seasons on TV late in the evening on Thursdays in anticipation for the first of the movies airing in the theatres on April 4th. They also included a lovely Key Visual for the films: 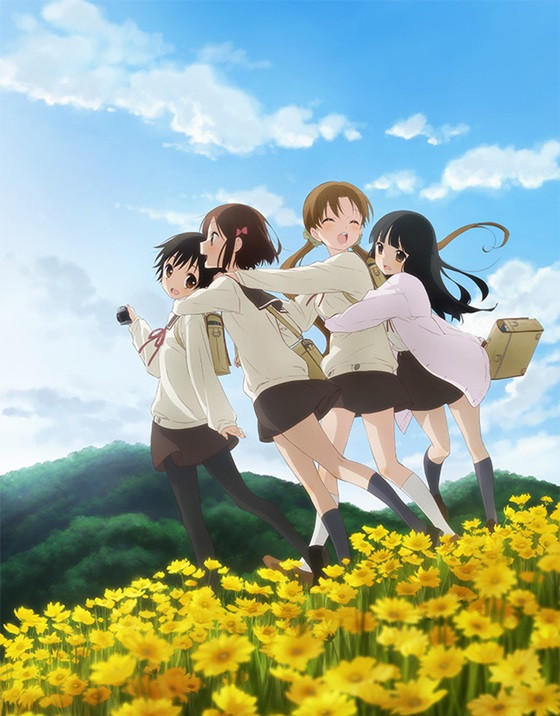 In the announcement regarding the re-airing of episodes on the Tokyo MX station also came a list of which episodes they were going to chose. Here is the list with some additional notes and explanations from me:

Jan 8th: Ep 01 – Hitotose ep 01 “It’s the town where I grew up” – showing the turning point when Fuu begins to come to terms with her father’s death and go back to Takehara, where her grandmother lives and her father grew up.

Jan 22nd: Ep 03 – OVA 3 of 4 (special edited version?) “I’m happy when we all walk together” – when we are introduced to Kaori’s older sister Sayomi who takes them on a walking tour.

Jan 29th: Ep 04 – Hitotose ep 04 “The sounds of Shiomachi Island” – an ep focusing on visiting Maon and her family.

Feb 5th: Ep 05 – Hitotose ep 07 “The promise of the Bamboo Lights” – remembering when her father took her as a child to Takahara’s local festival, Fuu looks forward to seeing it again.

Feb 12th: Ep 06 – Hitotose ep 10 “What will the me of tomorrow be like” – focusing on Kaori and her idea for an exhibition showcasing the talents of her group of friends named the “We Exhibition”.

Feb 19th: Ep 07 – Futatose ep 01 “A year since I was welcomed home” – Fuu decides to try and start a photography club at her school.

Mar 5th: Ep 09 – Futatose ep 06 “Looking for a smile that won’t come again” – a co worker of Fuu’s father invites her to come and visit places where she (Harumi) and Fuu’s father used to research and visit.

Mar 19th: Ep 11 – Futatose ep 09 “The bamboo lantern in my heart” – on the eve of the second bamboo lantern festival an old, gruff friend of Fuu’s father comes to visit.

Mar 26th: Ep 12 – Futatose ep 12 “And thus, the season of departures had come” – Kanae graduates, Fuu wonders about her future and her mother takes her on a bike ride.

On the same day as this announcement animenewsnetwork posted about the plan to re-air episodes and included a little more information about the first movie that would show in theatres:

“The four films collectively have the title Tamayura: Sotsugyō Shashin (Tamayura: Graduation Photos). The first film, Tamayura: Sotsugyō Shashin Dai-1-bu Me -Kizashi- (Tamayura: Graduation Photos Part I: Sprout – Portent), will open on April 4, 2015 for a limited two-week engagement in theaters throughout Japan. The story of the first film is set in the spring, when Fū, Kaoru, Norie, and Maon get promoted to third-year high school students, while Kanae has graduated. Two kōhai join the photography club. Even though they bring in new friends, their lively daily life remains unchanged. Yet, the four third-year students are slowly thinking about their own future dreams and paths as they face graduation in about a year….”

Earlier this month there was also an announcement on crunchyroll’s site that contained some of the sketches for the characters in the movies that had been released on the main Tamayura site. They pretty much looked the same, although one of the characters decided to cut her hair short. Here are the character designs of both the four main characters, including: 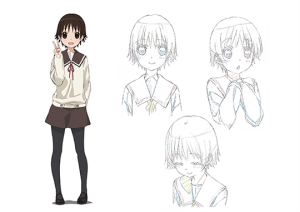 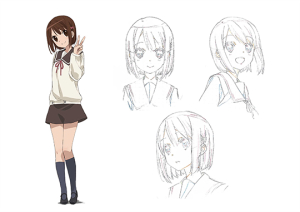 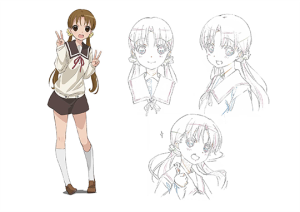 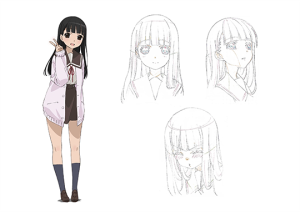 as well as the two new underclassmen who decide to join the Photography Club Fuu formed in season two of Tamayura. 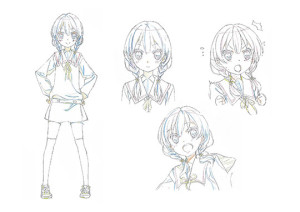 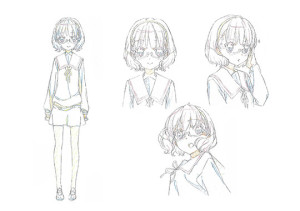 Also. just today another update and announcement has come to light on an animenewsnetwork post, for the first movie trailer released, wherein we get the opportunity to here a bit of the theme song “Kore Kara” (From Now On) written and sung by Maaya Sakamoto. Here is the movie trailer:

And here is a translation of the dialogue in the trailer proper, also from the ANN post:

“Fū: Next spring, we will graduate.
Text: Tamayura last arc. 1st of 4 parts.
Maon, Norie, and Kaoru: Huh? Potte!
Fū: Um, you know… I’ve been thinking about the future…
Text: High school third years – spring
Riho: I’m going to Tokyo
Fū: Shihomi is…
Text: Time for good-byes
Fū: Even those days of worrying, doubt, and uneasiness will someday be something you treasure. That’s something my father taught me.
Text: The last year. Irreplaceable days for girls.
Text: Watch the town, the people
Maestro: Fū will be just fine.
Fū’s Grandmother: Yes. Definitely just fine.
Text: Little by little, slowly
Chihiro: We all have our fathers
Text: People grow
When everyone’s together, there’s a power that appears.
Fū: That’s right. Because everyone was here for me…
Riho: You decided?
Fū: Yes.
Fū: Tamayura: SotsugyōShashin Dai-1-bu Me -Kizashi-“

We also got quite a few shots from the trailer itself. Here they are: 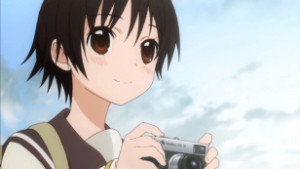 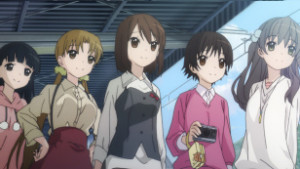 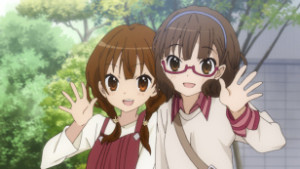 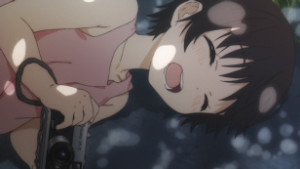 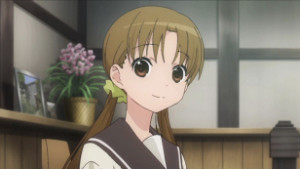 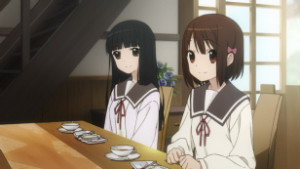 Happily we also learned of the movie release dates for the other three parts of “Graduation Photo”: the second and third films will open on August 29 and November 28, respectively, while the fourth will open on February 20, 2016. Still, come next season the first of the movies will air in the theatres, as was previously mentioned, and any time they become available I will definitely make posts here on anime.evo dedicated to them. While the re-airing of the episodes has been taking place I have been following along with them to refresh my memory.

Finally, here is another advertisement image for the movie itself that we were shown – one that is quite lovely: 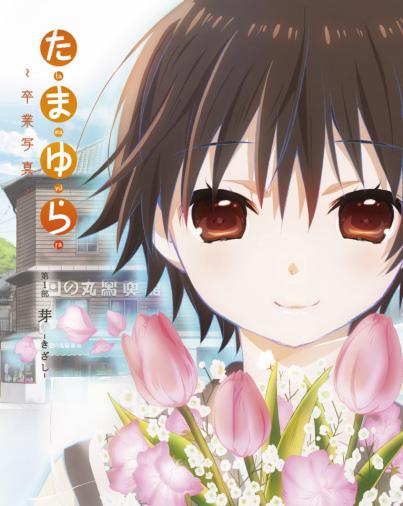 Hopefully this will be of interest for any who have loved the series and have not had the opportunity to hear the details of all the news surrounding the upcoming movies. I, for one, am absolutely looking forward to them, despite the fact that I know they will be very sad to watch, just as the eps of Sae and Hiro from Hidamari Sketch graduating were both sweet and sad to watch at the same time. For those whose curiosity has been raised about the series from this post, I defintely encourage them to give the series a try, starting with the four OVA’s first made available in 2010 and then proceeding to seasons one (named “Tamayura Hitotose”, which aired in 2011) and finally season two (named “Tamayura Futatose”, which aired in 2013). For more information one could always begin their research at Tamayura’s wikipedia page.