Well, as announced in the Pre-Winter 2014-5 post there are three series I am thinking about possibly blogging one of three possible choices for the season: Idolm@ster Cinderella Girls, Koufuku Graffiti and The Rolling Girls. Now that all three series have aired their first ep I thought I would give my first impressions of all three series so far. 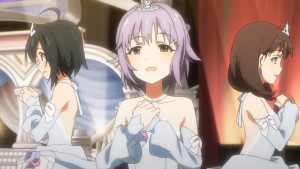 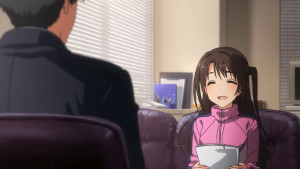 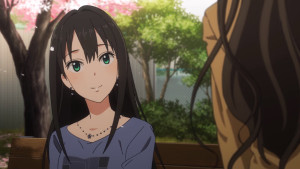 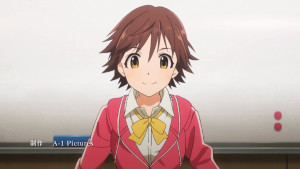 I should say outright that I am a big fan of the first Idolm@ster anime adaptation, and have been looking forward to the Cinderella Girls adaptation as well. I have never played any of the source material games, which focus around the player being the “Producer” who raises groups of idols to stardom. The animes, movies, OVAs, the various manga adaptations and the music proper is most of my awareness of the franchise. There does exist a very good wiki dedicated to the franchise, though, and surprisingly there is a really good tvtropes page about it. Needless to say, even with those (and other) resources the franchise as a whole is humongous. And the Cinderella Girls branch of it is the most recent one, with the anime perhaps helping to give it a boost.

The anime series itself seems to be focusing on a trio of idols named Uzuki, Rin and Mio (who appears at the very end of the ep). There have been idol auditions associated with a “Cinderella Project” (also called the 346 project) and after several candidates were chosen three slots suddenly became open again. The “Producer” seeks out the trio after the fact to add them to the candidates, many of whom are already performing idols – we see glimpses of many of them during the OP sequence alongside the Studio 765 members of the first anime adaptation as well.

One of the biggest differences in terms of anime adaptations between the first and this version would be in the character of the Producer. In the first adaptation that aired a few years ago he was a kind, gentle, somewhat clumsy but large hearted young man and rookie producer who grows into the shoes of his job admirably. In Cinderella Girls the Producer comes across as a rather reserved individual, yes, but it seems to me, though, that despite the intimidating exterior and difficulty at articulation he does seem to have a keen intuition and insight into an individual’s potential combined with a dogged steadfastness.

No doubt in future eps the new trio will begin to interact more with the other idols already chosen to be part of the 346 project, and the story will move along, but we will see. Interestingly there has still been no official announcement whether the series will have one or two cour – I personally would like to see two cour, but regardless I enjoyed the first ep. Whether or no I would blog it though … well, that is still up in the air. 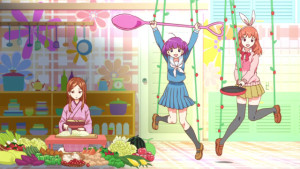 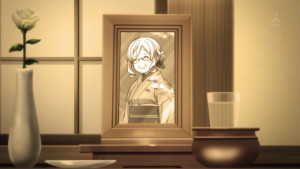 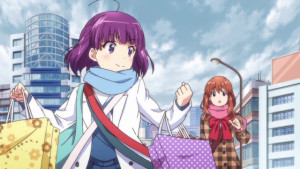 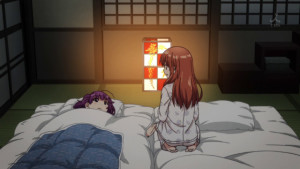 This is the series I was expecting to blog, but also one that I could easily foresee being the most difficult to do so. And that is simply because it is a Kirara manga Slice-of-Life adaptation, and not a whole lot happens. Crunchyroll’s official summary of the series seems to be this out too: “The story follows Ryou, a middle school girl who lives by herself. She has a knack for cooking, and she makes friendships with everyone through her food. The cooking manga is “full of detailed cuisine art to whet the appetite.” The “koufuku” in the title is wordplay on two Japanese homonyms — one which means “happiness” and another that means “appetite.“

One of the more interesting things about this series for me is the combination of staff involved. It is not only a Kirara manga adaptation, but the infamous Marie Okada is involved (in Series Composition), but the director is Akiyuki Shinbo – two contemporary figures in anime that are definitely polarizing figures; that is, you often really like or dislike their ways of doing things. The studio is yet another interesting addition in the same general vein – it is Shaft.

That being said, I thought this ep was funny … I was literally chuckling aloud repeatedly throughout the ep. I would not be surprised if I am prolly one of the view viewers who laughed so consistently thoughout, though. The facial expressions of both Ryou and Kirin were also ridiculously and crazily over-the-top – a sort of different emphasis rather than the usual head tilts and film noir camera angle styles Shaft has became famous for over the years. And of course as with many Kirara series there is plenty of d’aaawwwww present. I also enjoyed the OP and the ED – it is a very good happily silly and ridiculous harmony to the over-the-top facial expressions. The chibi’fied characters rocking back and forth during the pv for the next ep while the singing of something “doobie, doo wah” style had me literally laughing out loud, though.

It is nice to have a series you hoped would be good to deliver like the first ep did for me. Now where will it go from here, I wonder? Hopefully it will continue to be good! I am still leaning (on an irrational side or approach that is hard to explain) towards blogging this series at present, but … well, we will see over the next few eps. 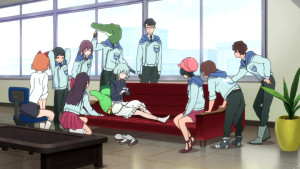 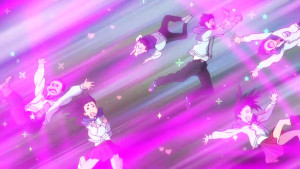 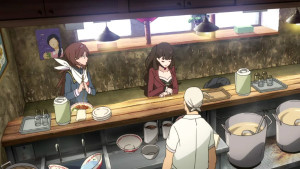 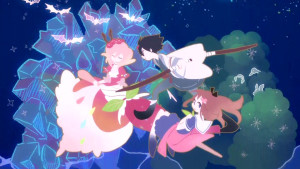 Now this … this is definitely a horse of a different color here. It is hard to know exactly what is going on with this series, especially since it just dumps a boatload of information regarding it’s setting in a fast and furious way and then speeds along with explosions, conflicts, and on and on assuming you have “gotten it” and understand exactly where things are going! For myself I found myself chuckling and scratching my head and saying “Wait, wait! What was that?! Who? What happened? Who are these people? Why are they fighting again? Argh!”

Essentially as best I can see some sort of conflict happened in the future and the result was Japan’s national government dissolving, and somehow some kind of system of localized chieftains or gang leaders arising. These local rulers settle things by fighting one another, yes, but also have somehow acquired super powers somehow, but they are not simply gang leaders – the gangs (whose members are often extremely silly – especially what seems to be the “main focus gang” in the first ep) seem to differ a lot between one another in terms of what they do if their off time, but almost seem as if they are mercenaries for local governments at the same time – that is, they are not funded directly by the powers that be.

The visuals are quite brilliant and madcap, and in some ways it reminds both myself and others of last year’s Kill la Kill, though this series seems more rounded and bubbly visually that the angled and sharp visual style of Kill la Kill.

At the moment I am not really sure what to make of the series as a whole … but I will say that it is certainly interesting and that I am more than willing to give more eps a try. As for blogging it, I am afraid that for now like with the other series mentioned in this post, I am still on the fence.