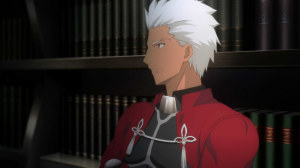 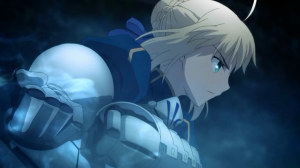 Damn, that was one heck of a showdown. It sure solves the mystery of what happened to Rider. I don’t think there is any issue in saying that Kuzuki killed Rider after seeing that. Even Saber was caught offguard by his ability and in that case could easily see Rider losing to someone like that. He was definitely powerful enough to do damage to a servant, though I suppose we’re also supposed to note that especially Saber’s guard wasn’t up. You just don’t expect to attack a human and for them to be at that level. Still kind of embarrassing that this human has done as much if not more damage than any servant in this war.

It was a really good episode for the sake of development for Shirou, Rin, and just for the pure combat glory. Again the episode avoided what could have been an easy 2v1 situation against Caster by leaving Archer at home. But this time I can’t really blame Rin. She needs them to take down Caster, but she can’t risk Archer being involved. His agreement with making use of Caster and her tactics is dangerous and sadly she’s low on command spells. If he does something crazy she’ll be left unable to do a thing. The safer gamble was on Shirou and Saber. In a rational situation that should have been enough 2 masters and one servant should have been more than enough against one master and a servant copy since the real Caster doesn’t risk leaving the temple. Sadly, Rin was right in that this was a loss for them. They got away, but this was their ambush they needed to win. 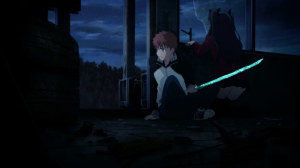 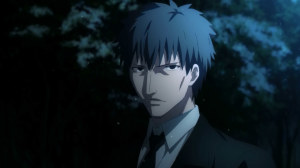 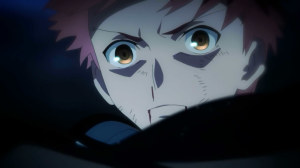 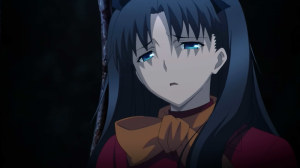 It was nice that Kuzuki became a clear suspect. He was a kind of strange guy, but there wasn’t anything too certain on him before. A bit more unsettling is the idea that this guy is some kind of killer. Talk about a lucky break for Caster getting a monster like that as a master. Someone with clearly loose morals who doesn’t care much if she kills people he doesn’t know. Quite convenient really.

The plan to take Kuzuki down was solid and the best they could do. Sadly he was too much for them. I don’t think someone like Rin is used to fighting someone in close quarters and Shirou was pretty overwhelmed for a while. He literally had to push himself to the limit in order to get anything done there. Though what he did accomplish is pretty amazing.

It makes you wonder just what on Earth is going on here. It does have some logic that if Shirou was to create any kind of weapon it would be those blades. For whatever reason they just pulled him in. Just a strange pull towards those swords and thus they were in his mind when he decided to make his stand. It was pretty impressive that he got them to work that well. Might have pushed his body beyond its limits in the process though. But in the end it was a situation where he couldn’t let Rin be killed. 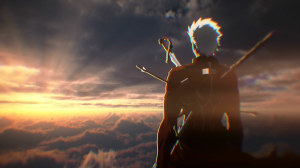 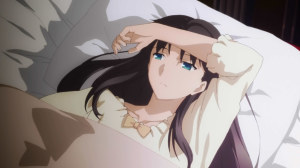 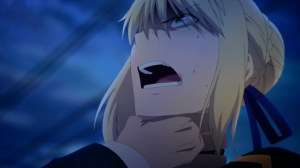 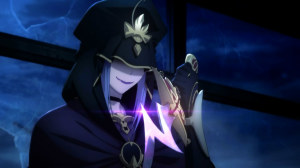 That opening dream sequence was pretty interesting. It’s no wonder Rin has been so off. It’s not just that she doesn’t like what Caster is doing and she clearly has some feelings towards Shirou, but those dreams would mess anyone up. Clearly she figured out from those images what happened on Archer’s path to becoming a heroic spirit. Something that really has her unsettled. I suppose the interesting thing is that Archer himself is unaware that his past is being transmitted to Rin through her dreams. Whatever is in his head it may be a key in keeping him in line.

The fights themselves were awesome. Just something “holy crap” about Saber just getting owned there. I’d guess that the first hit was so effective and magically infused that it left her unable to regain her stance and just continually get knocked around like that. Rin’s defeat was a little more believable. He was incredibly fast and her long distance style was useless once he got through to her. The only thing that kept this from being a slaughter was Shirou tracing those swords and Saber gathering herself before Caster could strike. It was a pretty risky situation all around. 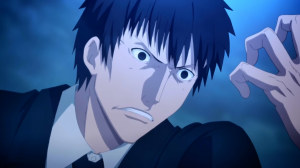 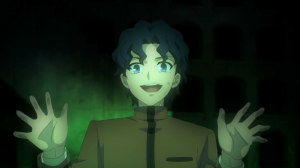 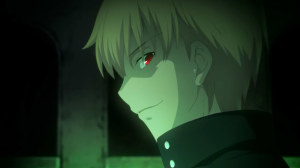 Kuzuki’s stance is pretty infuriating in its own way. The guy practically acting like he’s unconnected to this whole situation. He gave Caster a place to set up shop and he’s connected to her. Only when someone takes a shot at him does he accept any involvement in this situation at all. Caster could kill everyone in the town and it wouldn’t be his problem. Certainly Caster found the best master for her. Someone completely unwilling to restrain her actions. She’s pretty well a solo participant in this war. Though maybe the most hilarious thing was that even Caster had no idea that Kuzuki was that kind of monster. Made the situation pretty interesting.

Another unsettling situation is one with Shinji. Rather than Lancer or anyone it was the blonde guy who ended up getting involved with him. Certainly makes things strange with him seemingly getting involved with Sakura before. Though from the point of view of this series it’s plain weird for a servant to be wandering around like this. Though I suppose you could rationalize it as the proper Assassin of the war, but even that doesn’t quite fit. Doesn’t seem anything like the assassin type. The guy has a pretty scary mindset as well. While in the past he’d see the lives of even slaves as valuable, there are so many people now that he sees individual lives as worthless. Maybe the ultimate worst guy to come out on top of this conflict. 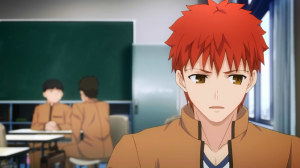 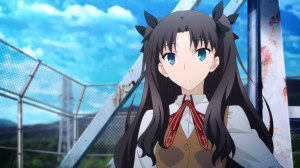 The episode itself was pretty awesome. The action was great and it really shot forward this Caster situation. There’s no turning back from here. They have to make their move against Caster even if it means risking Archer encountering her again. The coming episodes should be pretty exciting. Not sure we’ll have much action next week, but with this first part about to wrap up we can be sure some big things are ahead.
Score: A+